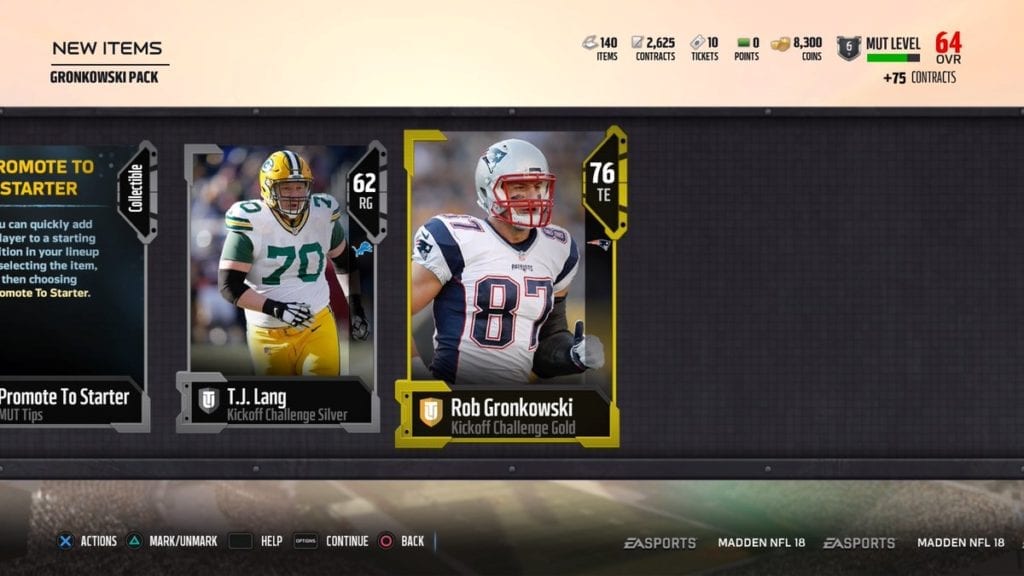 With every new release, the arms race heats up and MUT players dive in head first to get their hands on the best cards in their quest to rule the head-to-head world. With new cards, challenges, and twists, MUT has something to offer for veterans and newcomers alike. No matter your level of experience, whether you are rocking the G.O.A.T. Edition or keeping it standard, everyone starts somewhere, and this No Money Spent guide will help to get players started in the world of Madden Ultimate Team.

(For the purposes of this guide, I will be basing my recommendations off of Madden 18 Standard Edition)

Before entering Madden Ultimate Team, players should complete the new Longshot story mode. By completing various parts of Longshot, players will receive rewards such as uniforms and players to use in Ultimate Team. Longshot is quite good and isn’t too terribly difficult or time consuming, with the best initial reward being an 82 overall Dan Marino card and an 82 overall Chad Johnson. With elite cards starting at 80 overall, finishing Longshot essentially gifts players with two elites to start off with in MUT. Players will also receive the high school versions of both Devin Wade and Colt Cruise, which are needed for the solo Longshot challenges. Completing those challenges will result in getting an 84 overall version of both players. The next elite card players will receive comes after entering the MUT mode itself by way of being able to select a Core Elite card from any of the 32 NFL teams. This choice is largely going to be based on personal preference. Keep in mind that chemistry plays a part in building a killer squad, so choose the Core Elite that best matches your play style. Unlike in the past, offensive linemen are a vital part of building a winning Madden Ultimate Team in Madden 18, with centers being arguably the most important part of the line. The Madden development team has implemented a collective awareness trait for offensive lines. The awareness of each lineman is added up and the average is used to determine the group’s collective awareness. The catch to this lies with the center position as the center counts twice in formulating the average awareness for the unit. The center will also replace the lowest awareness out of the other linemen, so the group average can go up or down based on who the player has snapping the ball. In Madden 18, having a competent center is absolutely vital and should be a priority card to get for your squad.

Kickers Are People Too!

No one REALLY likes kickers, yet having a competent kicker can be the difference between a thrilling victory, or a rage inducing defeat. The kicker initially given to players in Ultimate Team is barely capable of kicking an extra point. With kick power and accuracy ratings in the 60s don’t expect to kick many touchbacks. Fortunately, getting a decent kicker in the auction house is an easy, if expensive proposition. One of the upsides in MUT this year is Madden seems to be far more eager to reward players with a ton of coins for completing objectives. By the time players finish the Kickoff Challenges, roughly 16 K in coins will be available to use. Kickers in MUT used to be very affordable in auctions. Though more expensive in Madden 18 than past games, even a base Gold-level kicker will net players with a vast improvement to both power and accuracy. With the difficulty of the kick meter in Madden 18 being closer to the pre-patched version in Madden 17, kickers are now more important to upgrade than ever.

Perhaps the coolest addition to Madden 18 is MUT Squads, a chaotic multiplayer mode that allows MUT players to team up and take on other users. There are three different roles for players to choose: Offensive Captain, Defensive Captain and Head Coach. While in the beginning stages of developing a squad, MUT Squads offers the unique and perhaps unintended benefit of trying out MUT cards that you don’t actually have. While fielding a low overall team, players should try and choose the Head Coach role. Both the Offensive and Defensive Captains bring their MUT players and playbooks from each respective side of the ball that they control, while the Head Coach is only responsible for the uniforms, stadium and Head Coach. This allows players to actively test any potential card that catches their eye and gives them an idea of what schemes and play styles work for their user preferences.

Rounding Out The Group

There are a few easily obtainable cards that could also make a difference when starting out in Madden Ultimate Team. With a free 30-day trial for Twitch Prime, players will get a Legends Reggie White card, that can be upgraded to a 90 overall with the included upgrade tokens. This card can’t be auctioned off or traded, however. The Level Master pack is available for 250 coins and contains a 73-overall LaDainian Tomlinson (also unable to be traded or auctioned) that can be upgraded to a 92-overall Level Master version. The powered-up Level Master L.T. is a versatile running back highlighted by 91 elusiveness, 92 agility, and complemented by an impressive 82 catch rating paired with 84 route running. Where To Go From Here

Madden Ultimate Team is a deep and involved mode. New player cards are released on a regular basis, and the meta of competitive MUT gameplay is constantly evolving. As you beat solo challenges, raise your MUT level, and get more head-to-head experience, it’ll become easier to identify which cards are a good value and which are overpriced. It’s also important to remember that players should not be married to certain cards. In many instances, a slightly lower overall card will fit a player and their style much better than a higher-rated card. Keep track of which cards have potential for upgrades, and which cards are perfect for trading in for team tokens. Be mindful of contracts and remove unused players from head-to-head matches to avoid having to use more contracts than necessary. Keep exploring challenges and collecting cards to better improve your Madden Ultimate Team, and before long you’ll be fielding a Super Bowl contender for Madden 18.