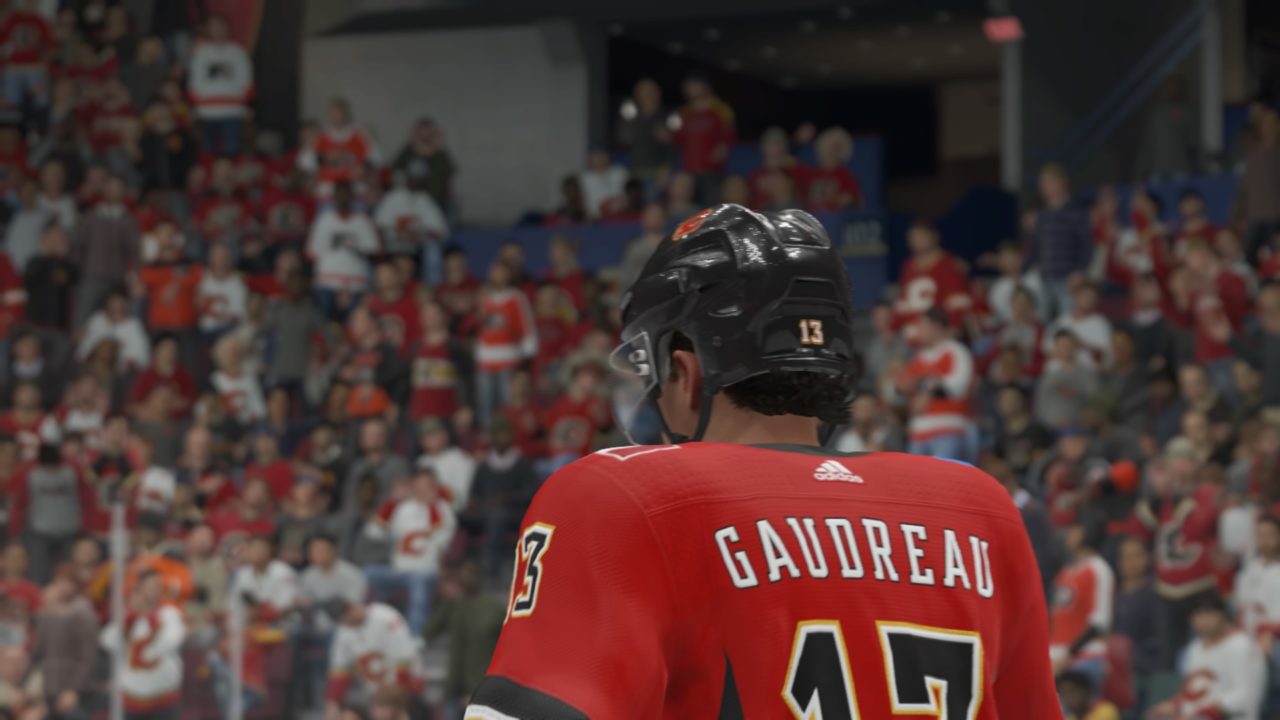 Now, of course, the changing of a player’s overall rating does not mean a whole lot on its own. What does actually matter is which specific ratings were changed. Now, when it comes to this series, I also have to point out the elephant in the room — hey, this is Operation Sports, it’s what we do — and mention the lack of player separation. It’s fun to talk about ratings, but until franchise players play differently than star players, and star players play differently than depth players, overalls will remain merely just a random number in some respects. But that is another discussion for another day.
For this particular roster update, I wanted to look at the ratings a little differently. On most occasions, I feel we look at these new ratings and say “wow, Player A has 40 points in 50 games and he was only bumped up to an 80? That type of reaction is understandable. However, for this particular roster update, I also wanted to look at how the player has performed in the games since the last major roster update. Most skaters, barring any lengthy injury, should have played in 20-27 games since the last major roster update at the end of November. 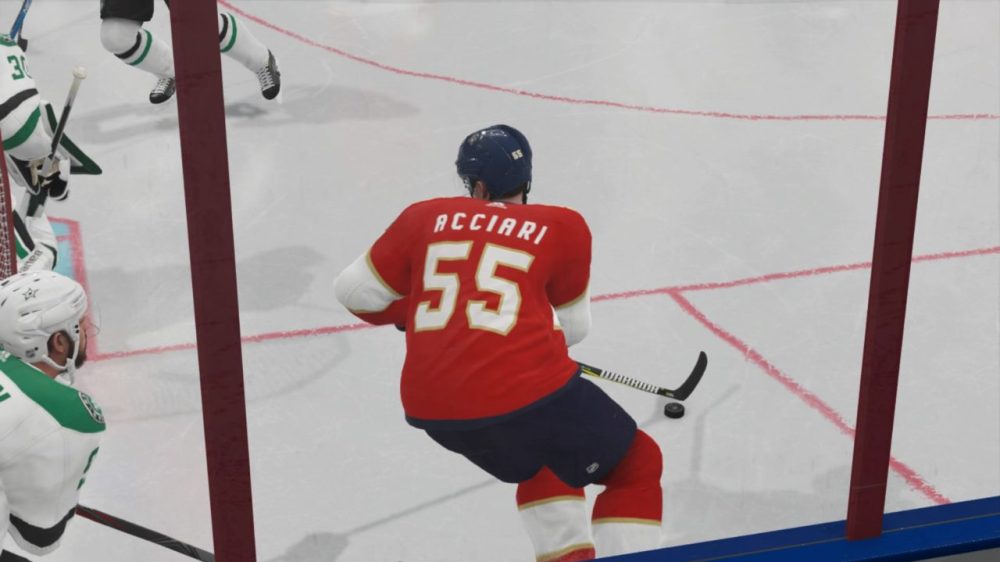 Just about halfway through the season, Acciari has almost already doubled his previous career highs in goals scored and points. In November, Acciari was playing around 14:00 minutes per game. Now, due to his hot play over the last few months, in January he saw his playing time jump and was playing around 19:00 minutes per game. Furthermore, proving just how hot this guy has been when it comes to lighting the lamp, Acciari registered back-to-back hat tricks in the middle of December.

You would assume a guy who has been scoring that often would be cashing in big time on power-play opportunities, but that’s not the case. Incredibly, Acciari has managed to score 13 of his 14 goals at even strength. The other came short handed.

Perhaps it’s Acciari’s lack of assists (3) that hold him back from having a higher overall rating? Regardless, a guy who has been scoring so often during this compressed window of time — averaging over 0.5 goals per game — should have received more than a 1 point rating bump. 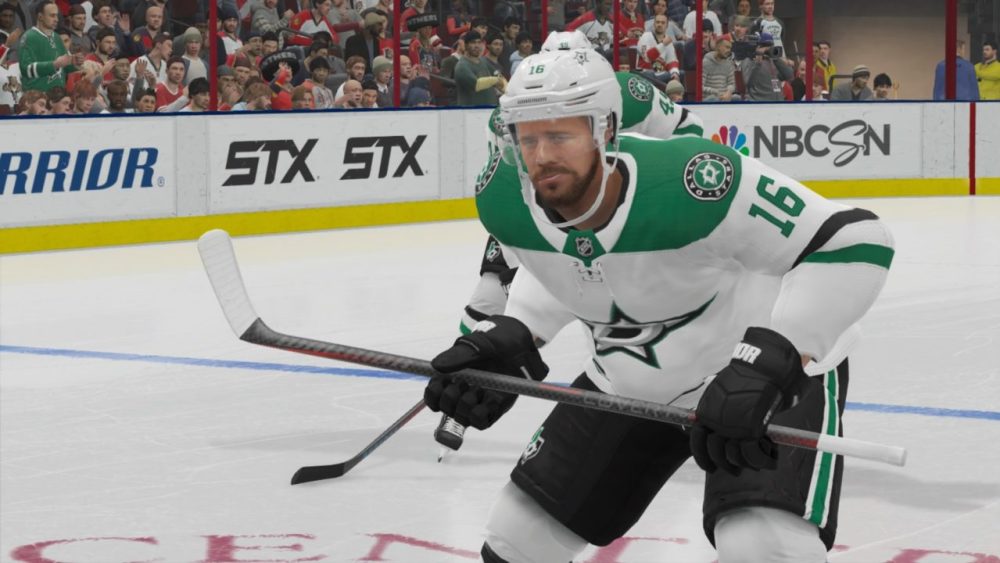 It has not been a statistically positive change of scenery for “Little Joe” Pavelski. The former San Jose Sharks captain has only recorded 7 points in his past 27 games, with just 3 of them being goals. For the season, Pavelski hasn’t yet even amassed 20 points despite playing in 50 games.

Pavelski has recorded 64 or more points in six straight seasons. Unfortunately, that streak looks like it’s in serious danger of being broken this season. So, if we just look at his weak performance over the past 27 games, EA gave Pavelski a break by only lowering his rating by 1 point. 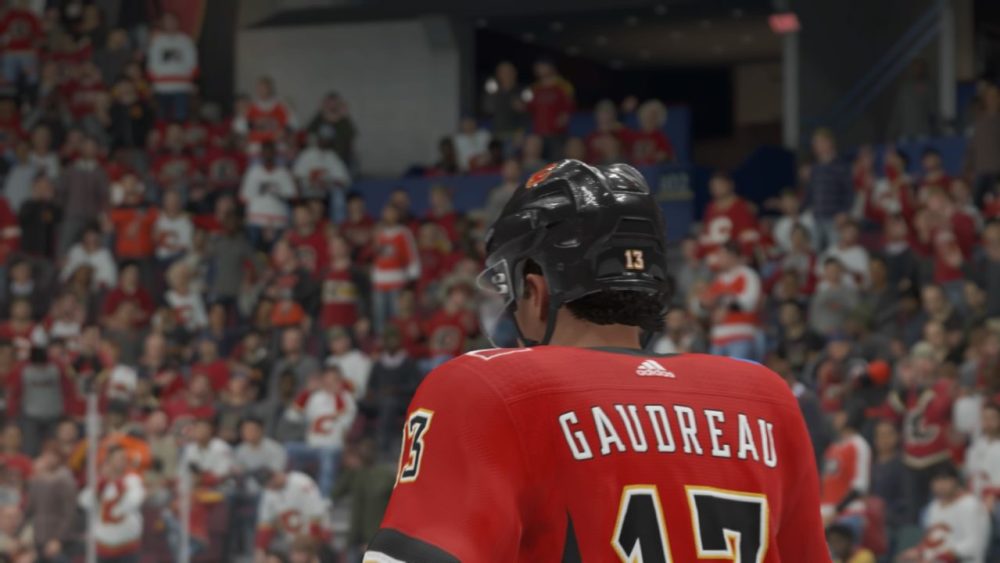 If you look up “Johnny Hockey’s” stats over his past 27 games, you might think he is playing well. However, when you are “Johnny Hockey” and you’re coming of a 99-point season last year, it’s not good enough. Calgary’s star winger has even found himself on the third and fourth lines for a short period this season. Furthermore, during Gaudreau’s recent stretch of 5 games, he has only managed 2 points — with both of them being assists. Johnny Gaudreau, while Immensely talented, is no doubt having a down year by his standards. Given his recent cold streak, more than a 1-point decrease would have been fair here for Gaudreau.

If we just go by overall rating, the six goaltenders above make up the top-six goalies in NHL 20. Four of the six goaltenders are on very, very good NHL teams. The two exceptions being Carey Price and John Gibson. The other four goaltenders do benefit from playing on playoff-caliber teams so they should theoretically have good stats, right? Well, that is not the case. 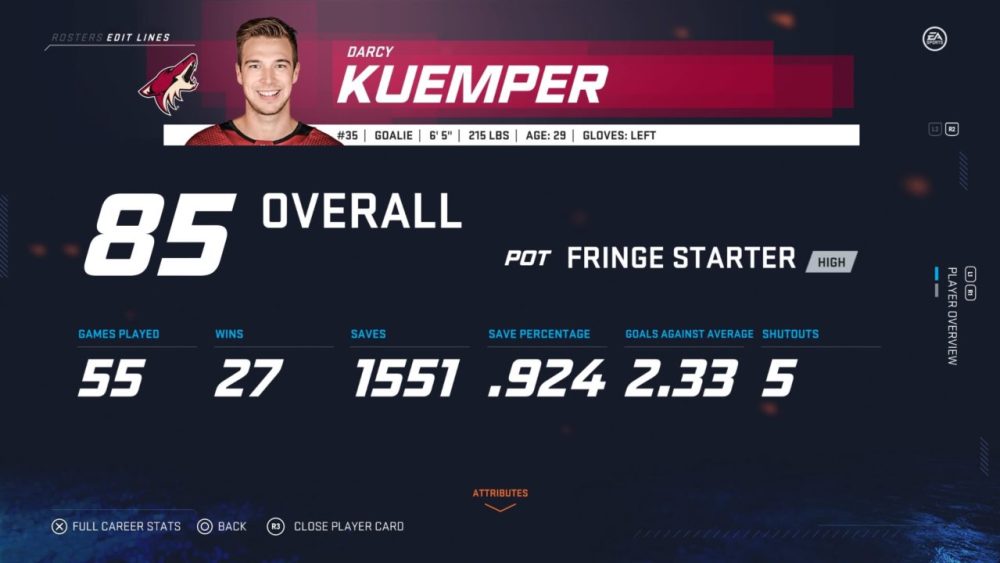 Kuemper has now followed up a strong season last year with an exceptional start this year. Over the last 10 games Kuemper has started, he has only allowed 19 goals total — averaging less than 2 goals per game. Darcy Kuemper is second in the NHL in goals against average with an astonishing 2.17 GAA. Also, if that is not enough, Kuemper also sits at number one in save percentage, sporting a .929.

In addition, last season Kuemper recorded 27 wins and finished fifth in shutouts, and sixth in both goals against and save percentage. I think the last two seasons prove Kuemper is playing above his 85 overall and should at least be rated in the top five when it comes to goaltenders. 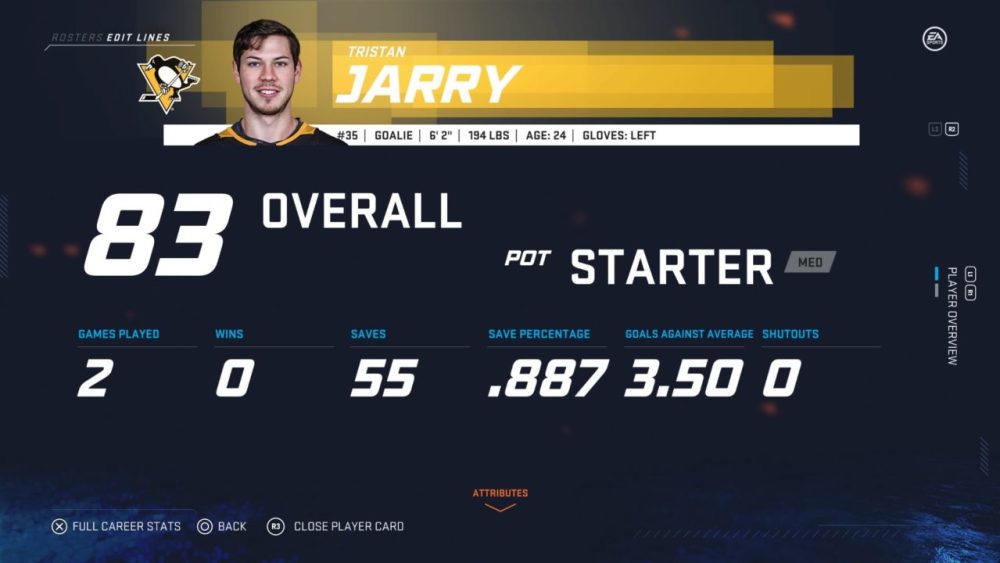 The 24-year-old Tristan Jarry has already started 24 games this season, which is just two starts fewer than his previous three seasons combined. Jarry has recorded two shutouts and has allowed more than three goals only twice in his past 19 starts. Much like Kuemper, Jarry is in the top three in both save percentage and goals against average. The Pittsburgh Penguins goaltender is second in save percentage and third in GAA.

Furthermore, Jarry’s exceptional play has led to rumors of Pittsburgh moving on from goaltender Matt Murray, who helped the Penguins win back-to-back Stanley Cups just a couple years ago. An impressive 13 wins over his last 19 starts, and ranking in the top three in both save percentage and GAA, Jarry should be ranked among the league’s best. Instead, he is an 83 overall, which is basically just average backup status. 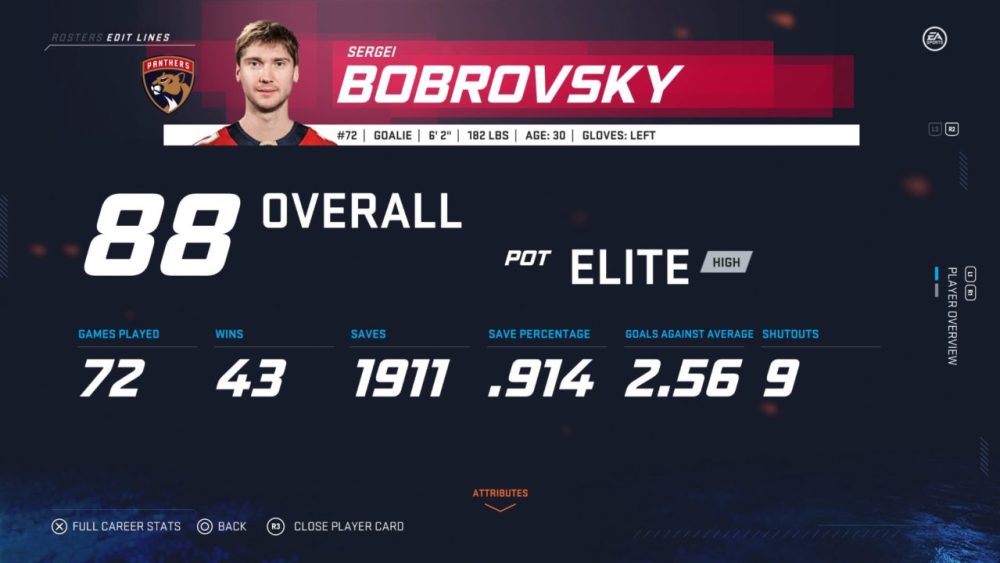 There is no denying the fact that Bobrovsky is an elite NHL goaltender. Bobrovsky is a two-time Vezina Trophy winner, in 2013 and 2017. However, this season has not been a good one for the first-year Florida goaltender. Struggling to adjust to his new home, Bobrovsky has given up four or more goals seven times in his last 18 starts. Also, to make matters worse, in a big game against the Tampa Bay Lightning Bobrovsky surrendered six goals in a loss.

The other statistics are just as ugly. Bobrovsky ranks just inside the top 50 in save percentage at 47th and doesn’t even rank in the top 50 in GAA. An elite goaltender? Yes. But is his 88 overall rating justified right now? No. 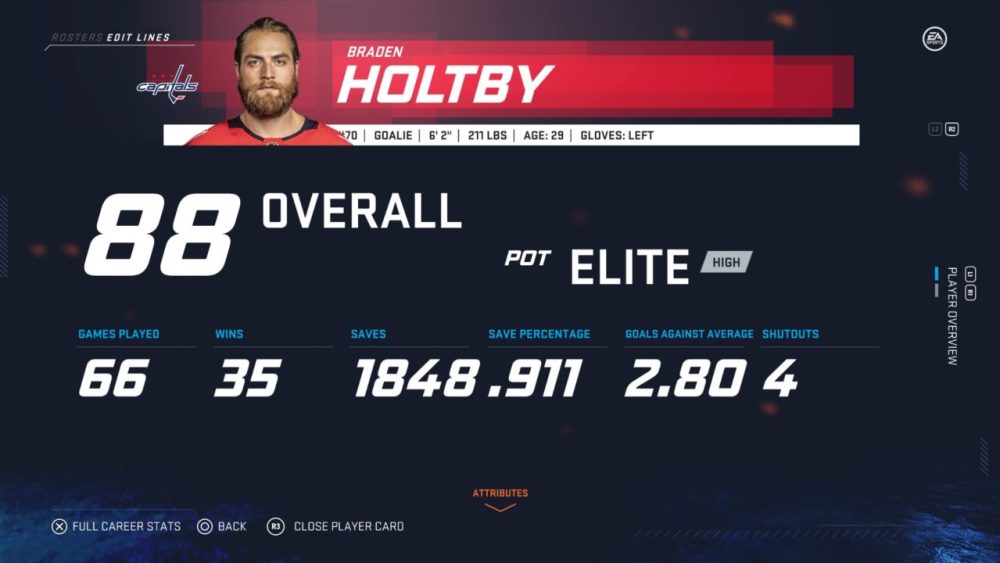 Holtby, much like Bobrovsky is no doubt an elite NHL goaltender and has a Vezina Trophy of his own. Two seasons ago, Holtby even backstopped his team to a Stanley Cup. However, this season has been a completely different story. Currently, Holtby finds himself 50th in save percentage and 47th in GAA. Perhaps it is due to the fact that Holtby is in a contract year and there has been talks of Washington not bringing him back.

Whatever the case may be, his poor play hasn’t helped the situation as Ilya Samsonov has taken a big chunk of playing time from Holtby. The statistics that Holtby has accumulated this season definitely do not support his current 88 overall rating.

What are some of the things you all spotted? Which new rating bothers you the most? Let us know in the comments below.