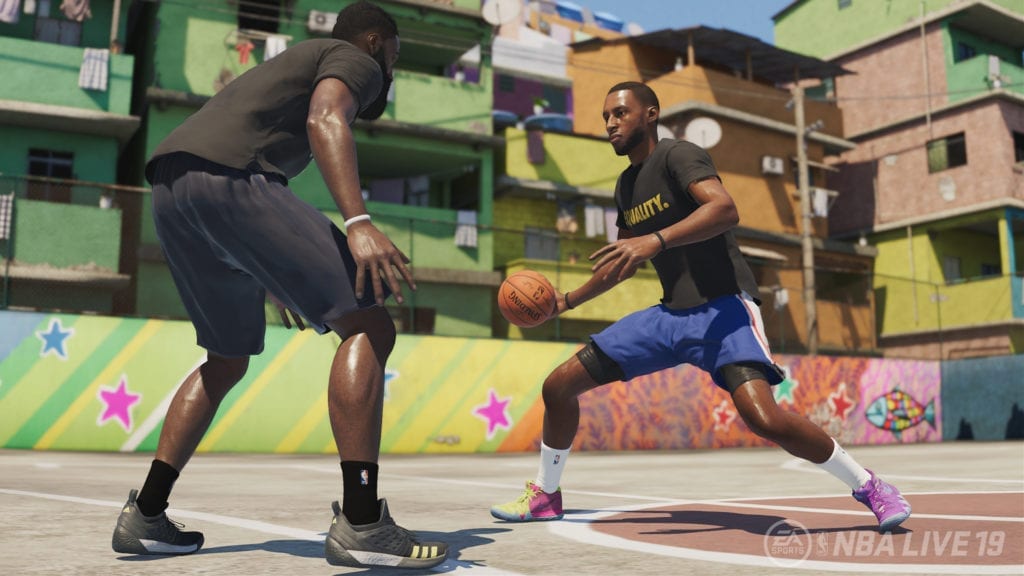 With another year under its belt, NBA Live 19 continues to march towards being truly competitive in the basketball market. While NBA Live 18 was a fun game and a welcome return for the snake-bitten franchise, it was not yet a great game. Player movement was stiff, there weren’t any differences in player release animations, and modes were either bare bones or lacking entirely.

One area where Live 18 shined was The One mode. Integrating the style of street ball with the substance of an NBA career, The One was a fun and engaging way to experience the game. As we march closer to NBA Live 19’s release in September, more news and more videos are being released showcasing EA’s upcoming basketball sim. Today we’re diving in to what looks good so far, and where the game may still have room for improvement. 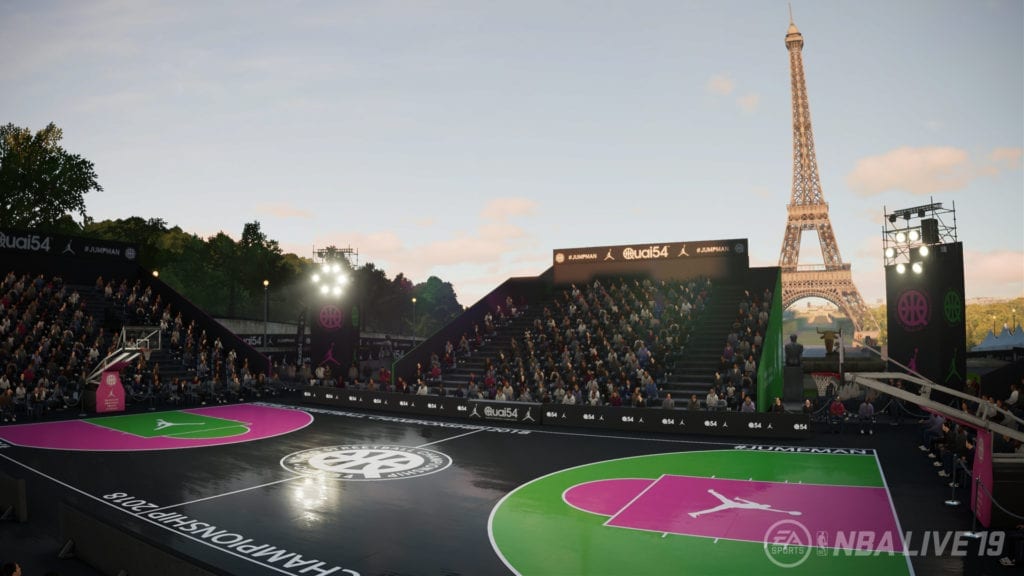 Female Create-A-Player: EA recently made the announcement for female create-a-player, and it’s been long overdue. For years, the WNBA has lacked representation in video games, and while the WNBA was present in NBA Live 18, there was no option to create a female avatar. Thankfully, that has now been rectified and just like on the male side, created female players can try their hand on the streets and in the gym for The One mode.

From the various videos on YouTube, it looks like all hair styles and player types will be available for the female avatars. There was even a sequence in the announcement trailer that showed a female throwing down a nasty dunk. Kudos to EA for taking care of an oversight that should’ve been corrected a long time ago.

Real Player Motion: Much like its sibling Madden NFL 19, NBA LIve 19 will include Real Player Motion for its players. With some hands on I got at EA Play, coupled with the recently released videos showcasing gameplay, it’s apparent Live 19’s players move in a much more realistic and fluid manner. Foot planting looks good and RPM has especially helped with the way dribbling looks.

One of the major complaints from last year’s game was how stiff and robotic the players moved, and a lot of that was due to how stilted the footwork was. Real Player Motion does a great job of minimizing wonky gathers and changes of direction.

Visuals: Let’s get this out of the way now: NBA Live 19 is a good looking game. In this year’s game, EA has added some of the coolest and most beautiful locations to play basketball we have ever seen in video games. From the Jordan Qual 54 in Paris to The Tenement in Manila, EA has painstakingly re-created iconic street courts for players to travel to and dominate.

Equipment is another area EA just gets right. Textures on the different arm sleeves, head bands and elbow pads all stand out from one another, and avoid that painted on look from the past. Shoes are another area that truly stand out. While the full list of shoes isn’t out yet, every screenshot and video showcases just how good the shoes look in game.

The One: What was, by far, the best part of NBA Live 18 is back and it looks to improve upon everything it did right. International street games, female characters and a new story are all a small part of what players can expect for NBA Live 19. It remains to be seen what the main storyline is, but last year’s story was very well done and I expect The One will continue to build on that past success.

The biggest area for improvement will be in the immersion on the NBA/WNBA side of things. Outside of cutscenes, there isn’t really anything differentiating an NBA game played in The One versus a game played in franchise. There needs to be more specific commentary-related nods to your player, specifically about his career outside of the singular game at hand.

No More Loot Crates: This is a big one. Now instead of having to buy a loot crate and hope to get the equipment you wanted, in NBA Live 19 you now buy the item you want. After last year’s Battlefield 2 uproar, it looks like EA has gotten the hint and done away with loot crates in their most gamble-heavy form.

Passing: I don’t know what it is about NBA Live, but passing remains one of the ugliest aspects of the game. The way the ball comes off the player’s hand just doesn’t look natural. The ball doesn’t sit in the hand properly, and as a result passes sometimes look like they’re being thrown off of the back of the hand or in the complete wrong direction for what would be bio-mechanically possible.

In addition, lob passes still look like the trajectory is far too low. Visually, the lob into the post more often than not looks as if it should be intercepted by a defender, only to magically end up where it’s supposed to be. On a positive note, bounce passes generally look good, though there are some odd clipping issues there at times. Hopefully, EA can tighten up the animations before release.

Defensive Spacing: Spacing on the defensive side of the ball is  another area that looks like it could use refinement. Far too often, you’ll see help defenders come in to the lane to meet the driving ball handler and then get stuck on each other when the ball gets kicked out to the wing or corner. Rotations are also a touch slow with defenders sometimes taking a step in the wrong direction before recovering and heading back towards their man.

The result is poor spacing in the middle, and I can see good users taking advantage of this versus the CPU. While I’m not saying it should look like the dreaded “five out” from 2K League fame, a bump in defensive awareness from the AI could eliminate some of the issues with the spacing.

Lack Of Franchise Info: So far, EA has not released any information about potential improvements to franchise mode in NBA Live 19. Franchise mode in Live is the one area where EA is still miles behind 2K, and the lack of news about it so far has me worried. Typically, game developers like to be out front with their biggest improvements, and the fact that we’ve heard nothing about franchise for NBA Live 19 tells me that the focus was on The One.

While The One is a great mode, not improving what was a bare experience last year may turn off a lot of potential consumers. Unfortunately, it seems like this is a trend with EA Sports in recent years. Here’s hoping the studio can add some substance to the mode in the future. 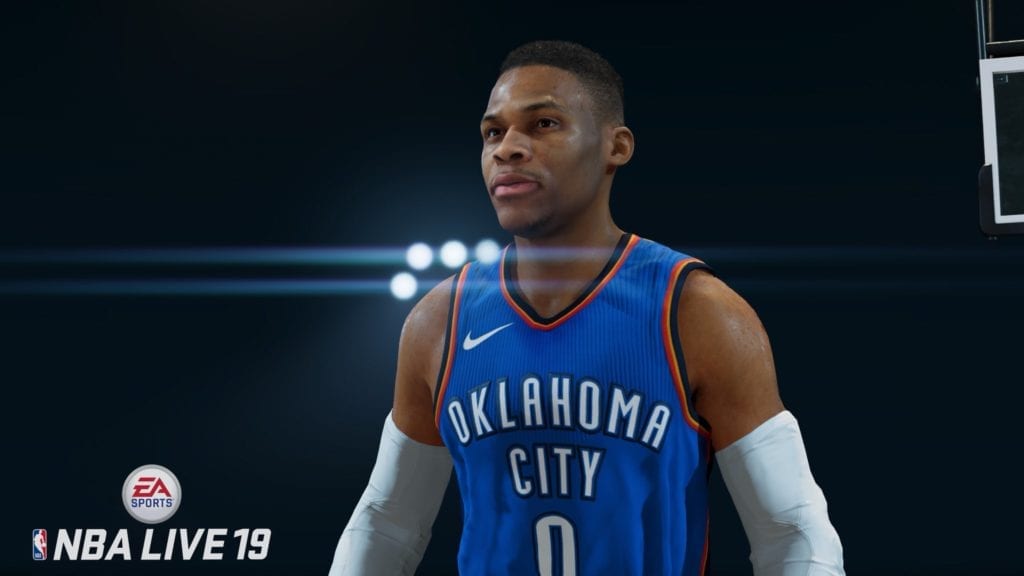 NBA Live 19 already looks to be a significant step forward for the franchise. Gameplay looks to be significantly improved with the Real Player Motion technology, and the addition of female created players is a pioneering move in the genre. Taking The One overseas and building squads builds upon what was the best game mode from Live 18, and it will be the main way that players will experience the game. There are still areas where the game needs to be refined, but EA is showing great attention (and care) to the game and that bodes well for its future. The real question is if EA will eventually show that same attention and care to modes like franchise once the gameplay has been locked down.