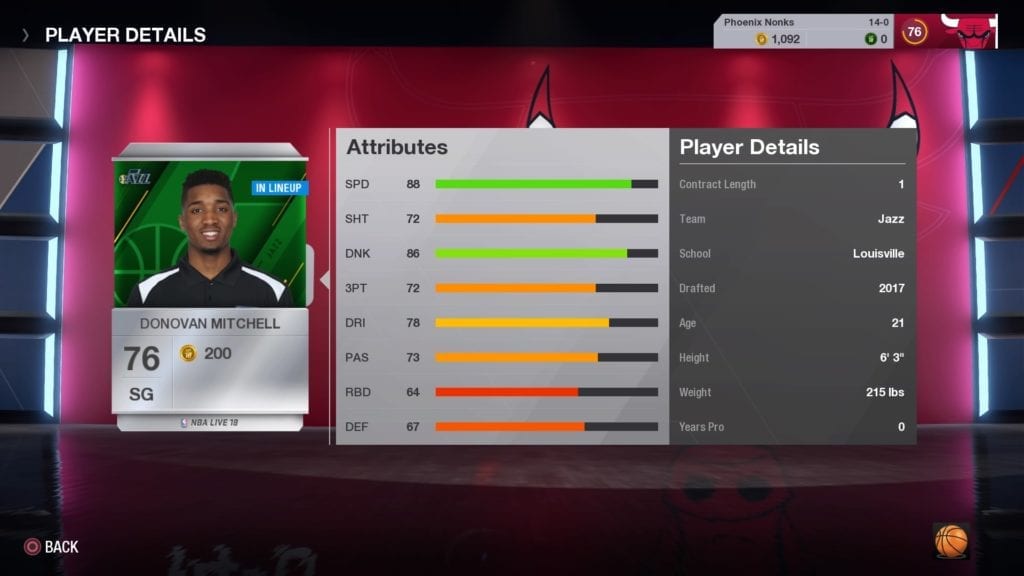 NBA Live 18 returns to the virtual hardwood after a one-year hiatus. Their anticipated return brings back the franchise’s most played mode, Ultimate Team (LUT). For those who may be new to the site and may have never heard of the Ultimate Team experience, you start out by building your team from scratch, given subpar players to begin your journey in creating one of the best teams ever imagined. You can create a team full of today’s superstars, or go combine today’s stars with a past decade’s stars (once released).

It is a grind for those who welcome the little to no money spent approach to this mode. But, just like many other games of this generation of consoles, you have the option to spend money to give yourself the best opportunity to earn some of the best players in the game before anyone else. But I think the question most of us ask ourselves in the beginning of a new season is: “where do I start?” That’s where I come in. I will be keeping you up-to-date on the latest cards and challenges NBA Live will be dropping throughout the course of the year. Now let’s get this ball rolling!

Where do I start?

When you first arrive on the main LUT screen, you immediately see virtual cover boy James Harden attached to “Fantasy Challenges.” There are 144 challenges available to start off the season that give you the opportunity to earn coin and player card rewards to help improve your team. As I mentioned briefly at the beginning of this article, if you are new to LUT this is where you want to get started to help yourself during the process of earning rewards. The training camp portion of the challenges are easy. It’s made up of 14 challenges with difficulty set exclusively to Rookie.

You can start out by facing off against the defending NBA Champions, Golden State Warriors to earn a reward exclusively from their dynamic roster. Or, let’s say you are interested in trying to earn one of the rookie phenoms entering the league, whether its Markelle Fultz, Lonzo Ball, De‘Aaron Fox or Jayson Tatum. There is a challenge specifically for the rookie class that gives you the opportunity to earn a player from the 2017 class. Also, did everyone watch the crazy offseason in the NBA? All the trades and player signings ended up sending a shockwave throughout the league. You want to challenge them and show them it doesn’t matter though? There is a series of six challenges that highlight six of the biggest offseason acquisitions. Take your squad up against them and show them who the real Ultimate Team is. It’s safe to say that taking the first few hours of LUT to complete these challenges is well worth your time when getting started.

Now, after completing the training camp challenges you now have some nice new upgrades on your team. Plus, you earned a decent amount of coins to hit up the auction house and start looking for some more upgrades to help round out your team. As a hardcore LUT player, I know who I want from the beginning: LeBron James, Kevin Durant, Kawai Leonard, Anthony Davis, and the list goes on and on for that special class of superstar players. But, with a limited amount of coins in a scarce auction house that has limited elite players up for sale, it’s very difficult to afford them right now as they are overpriced at this time.

I took the opportunity this past launch weekend to strictly grind for coins and search the auction house for some great budget players to suggest to everyone to try out for their team. I must say I was pleasantly surprised with the cards I picked up. Here’s a few great budget players you can add to your team if you’re embracing the little to no money spent grind (players are not in any specific order).

Barnes made a huge jump in the NBA last season after being given the opportunity to become the go-to-guy on his own team. His length and athleticism represent the modern NBA forward who can be a part of your big lineup, or small ball lineup if needed. NBA Live did an excellent job representing his real-life self, and transitioning his game to his virtual self. He has a solid handle that allows him to chain moves together and blow by slower defenders when on their heels. If he blows by his defender, my suggestion to the help side defense is to step out of the way. Barnes is one of the most consistent above the rim finishers I have seen in the game so far. And, if you recognize your opponent is adjusting to pack the paint every time, Barnes is still a threat. His mid-range game is money as he seamlessly pulls up and rises over the closing out defender. Like in real life, I feel like Mike Conley is still under considered when he is not mentioned as an elite point guard in the league. He is quick, has a great handle, passing vision is top notch, solid defender, and a decent 3-point shooter. Obviously, we hope to have the explosive Russell Westbrook, or the one-man fast break in John Wall, or the all-around traditional point guard in Chris Paul as our starting guard in LUT. But again, with it being so early in the season and players being overpriced, Mike Conley is an excellent pickup if found at the right price to be the general of your squad for an extended amount of time. Everyone who watches basketball knows how valuable the two-way player is. The ability to shoot three pointers consistently, and on the other end contain the team’s best wing player is vital in today’s game. Danny Green has molded himself to fit this crop of players in his 9-year career. He is not the most explosive player on the floor, and his chain of moves can be relatively slow at times. But he can still be dangerous when trailing fast breaks for the transition three. He is a solid piece to have a part of your rotation when first putting together your LUT team, just for his 3-point shot and halfcourt defensive components.

Randle is expected to have a breakout year as his career is hitting a pivotal moment for him to show progression. I’ve always seen him as a thinner more athletic version of Zach Randolph to be honest, and that is not a bad thing. Live did a great job replicating his physical play and athleticism in the post play in this year’s game. He is most valuable in the pick roll because if he can get a smaller defender on him, he will just bully his way to the rim and finish with a strong layup — or even a powerful dunk to draw a foul. He is exactly what you look for in a budget power forward.

Horford has always been that do-it-all type of player in the NBA in his career. He can score when needed, grabs a solid 8-10 rebounds a game, gets about 4-5 assist a game, and has a pretty good mid-range game. He is the prototypical center to have on your LUT squad if you play to his strengths. Plus, another thing that can make him a great addition to your team is he can run the floor and beat slower centers up court, creating easy over the top passes against the transitioning defense.

Lastly, I would like to suggest one sleeper player that can be valuable to your team. Each article I hope to have found a hidden gem that many wouldn’t think to try out on their squad.

I’ll be honest, even after his impressive Summer League showing, I hadn’t thought of Donovan Mitchell until I earned him in a pack after completing a challenge. Man, oh man am I happy I gave this card a chance, as it gave me a new perspective that the color of the card doesn’t always matter. Mitchell is an athletic rookie who can jump out the gym. It seems like every time he drives down the lane and has a defender on his hip, he rises up and just slams it over him. It’s amazing how OP a player can be that you never thought much of before. He will remain in my rotation for the early portion of my LUT season. Stay tuned, until next time!