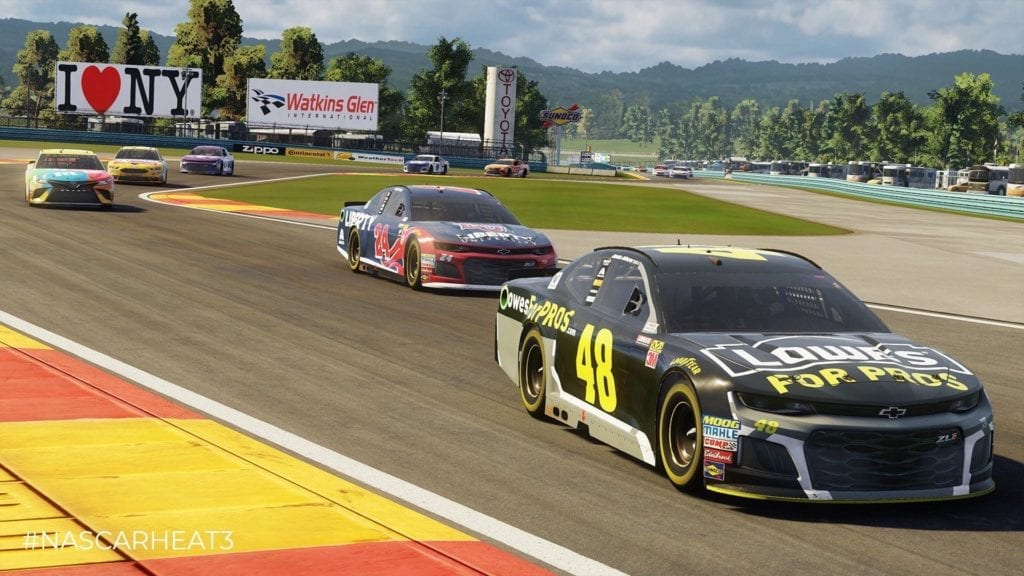 We have seen over three decades of NASCAR-themed video games, and while there have been some that have left their mark on the genre, the list of games that were easily forgotten is a long one. The Charlotte-based development and publishing house, 704 Games, knows this all too well and has taken the first two development cycles to create a solid foundation to continually build upon. Now, in collaboration with Monster Games, NASCAR Heat 3 is ready to be released into the retail market with hopes of moving past the genesis stage and evolve into a fully fleshed-out title with depth, authenticity and immersion.

Having had the chance to devote 30-plus hours into gameplay, the most accurate way I can describe the on-track experience in NASCAR Heat 3 is addictive. While that’s a great quality, the reasons I can describe it that way is because of the improved performance on the track. There is a high level of excitement when you strap in and fire-up your car (and series) of choice because of the multiple ways that NH3 delivers in the way of handling, solid physics, and strong and intelligent AI opponents. 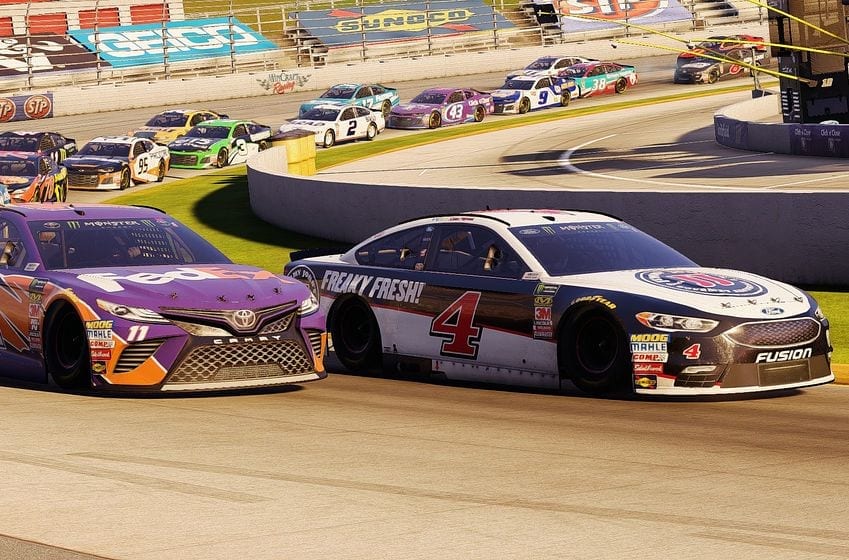 The handling is done so well that even on expert physics difficulty level with all assists off, users are able to race at 190 MPH just inches away from multiple opponents — all while projecting their next few moves ahead. What has really helped shape and create such an awesome track experience is the addition of multiple in-game adjustable car setups that allow the driver to set up the car from extremely loose to grab some extra speed, to very stable to maintain consistency around the track.

What is just as impressive as the handling and car options are the AI drivers and their ability to be smart and aggressive enough to take advantage of any mistake made on the track, whether by human or AI opponent. I often found myself having even more fun trying to secure a top-20 finish in a heated battle than I did fighting for a win — and that is a testament to the overall experience that Monster and 704 has delivered with NH3. 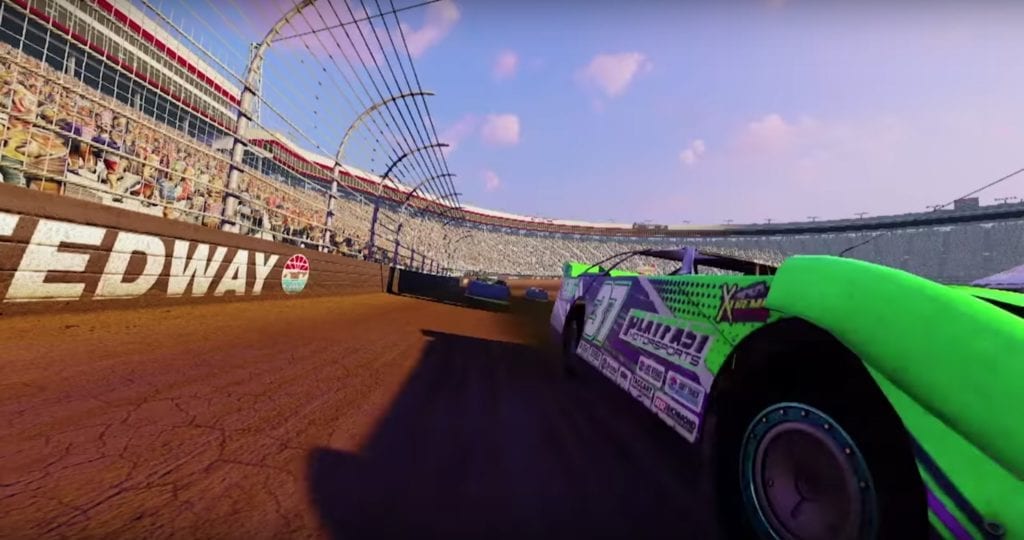 The level of immersion while racing with the in-car camera is spot on, and will feel reminiscent of the dash cam on a NASCAR weekend broadcast. This view helps round off one of the most fun and complete NASCAR experiences to ever hit console.

The development group implemented a true career mode with NASCAR Heat 2, and while it lacked much depth, it at least laid the foundation for a mode that many fans would devote numerous hours to. NH3 picks up where its predecessor left off, this time by adding the option to experience career mode either as a driver or team owner. On top of new career path choices, NH3 also offers up a new additional series beyond Cup, Xfinity and Truck series: the highly anticipated Extreme Dirt Series. Although the series is not an officially sanctioned series under the NASCAR umbrella, it brings a lot of interests, and more importantly, a lot of fun and excitement. 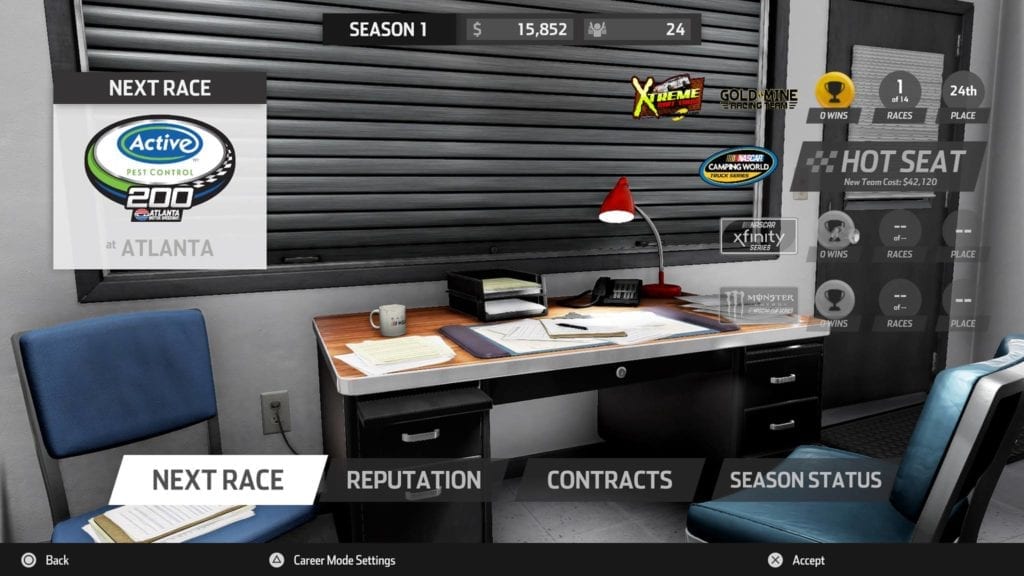 Of the two choices in career mode, I generally choose “team owner” simply because I want to experience life as a lower-tier team with limited financial backings, and having to deal with less-than-ideal facilities and resources. Almost immediately one will feel the “grind” mentality start to saturate your experience, as you have limited funds to prepare for each race weekend in regards to vehicle preparation, facility growth and the lack of a fully employed team. This translates well onto the track as you will find yourself fighting for every position knowing that the better you show, the better the pay — and that means securing funds to invest back into the team as a whole. Depending on the length of each race and the difficulty level one chooses, the process can be a long and tedious journey (in a good way) towards trying to build a successful team for each series, or a rather short climb up the NASCAR ladder.

I chose the long and tedious path and enjoyed every minute of the experience. As you move along each series, and assuming you have some level of success, you will be offered “Hot Seats.” These are offers from teams at a higher series than you currently sit, looking for a driver to fill in for the race weekend. Do well and impress that team enough, and they might have a permanent opportunity for you the following year. In the end, career mode in NH3 is much deeper and more enjoyable experience overall, and many should find a high level of satisfaction while trying to become the next great driver (and owner) in NASCAR. 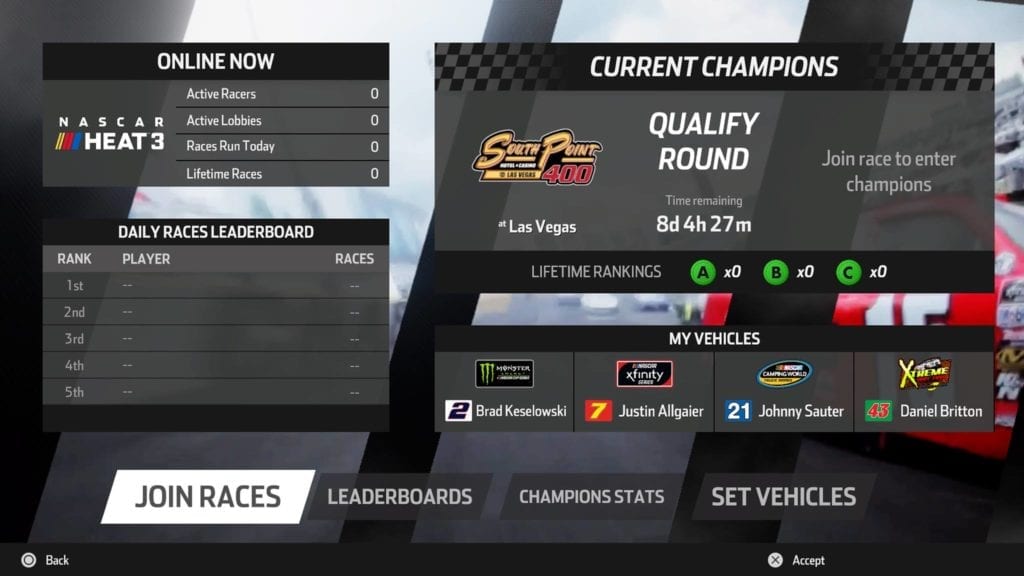 Creating a strong stable of multiplayer experiences is almost a must-have in the age of social networking and gaming, and NH3 delivers on almost every level. On top of delivering multiple online modes to dabble in, you can also (mostly) tailor and adjust these modes to your liking. While the online components of NH3 will feel familiar to veterans of the series, enough has been tweaked with new options that it feels fresh. On top of what was carried over from NH2, 704 and Monster have entered the fray of esports, with NASCAR Heat Champions: Road to Miami. This allows individuals to race in tournaments with the chance to win a trip to the Ford Championship weekend at Homestead-Miami, and a chance at $500,000. If you happen to be one that doesn’t care for esports, have no fear as NH3 also brings back 40-person online racing, split-screen racing, weekly challenges, leaderboards and more. There is plenty to do online in NH3, and that’s awesome for a community that thrives on online competition. 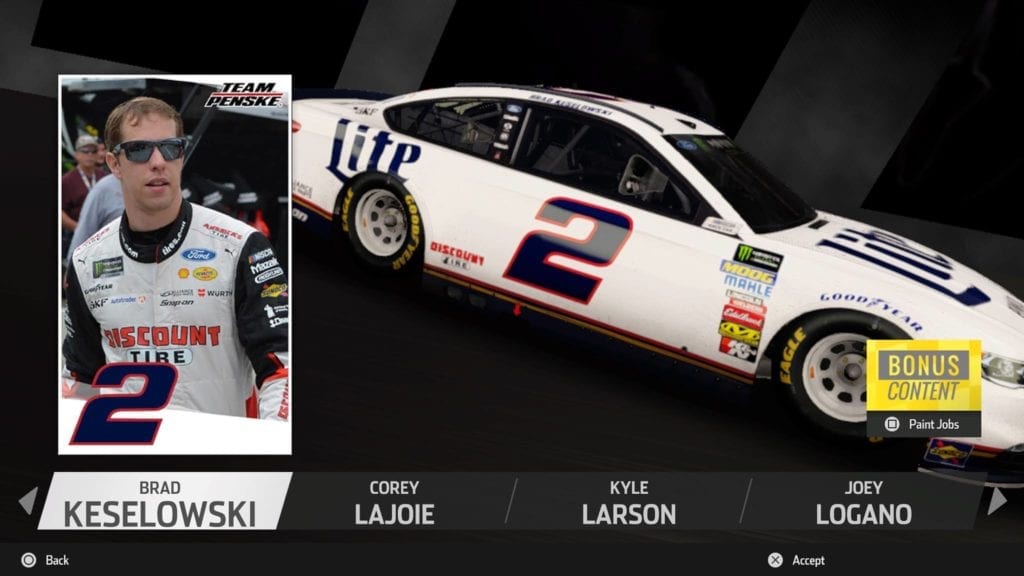 As awesome of an experience as NH3 is on the track, it suffers from lack of presentation. That’s not to say it is bad, as they have added some pre-race news stories that will see drivers having to drop to the back because of a blown engine, crash during practice, or car modifications that were not approved. That part of the overall package is done well and does add to the weekend, but a NASCAR race is all about pageantry, traditions, music, flyovers, and pre-race festivities, and you will find almost none of that in NH3. One could argue that in person each race is a spectacle to behold, and hopefully in future versions of the NASCAR Heat series we will see a bit more added to pre- and post-race festivities as a whole.

As I mentioned with the presentation for NH3, the damage model has also been improved, but there is room for improvement in regards to being able to showcase it as a positive. The amount of damage that a car sustains has such a strong and prolific effect on an individual’s ability to finish strong at the track and should play a much larger part in regards to a driver’s ability to finish the weekend on a positive note. Although some will argue against it, I would love to see “DNFs” for individual drivers (both human and AI) with blown engines, and damage so great that it requires one to pull into the garage. Can we really call it the “big one” if all 40 cars are able to get back on the track and finish the race? The answer to that is obviously no. Once again, this is not an indictment on the damage system that currently resides in NH3, as it’s an upgrade over the previous version, but hopefully 704 and Monster can implement a true damage system in the future that will help deliver a truly immersive in-game experience in regards to damage, and how it plays into the final weekend results.

Monster and 704 have combined forces to create a NASCAR title that is fun, accessible and delivers a strong level of on-track authenticity. When you combine that package together, you’re off to a great start. On top of that, it also delivers on the multiplayer front and should provide enough depth to keep the community happy until the 2019 seasonal update DLC drops. NASCAR Heat 3 delivers a solid package that will appeal to both NASCAR racing veterans and casual fans of racing alike. In other words, this is a game worth checking out. No matter what your interest is in NASCAR racing, the game offers a strong lineup of gameplay modes that will appeal to almost anyone.