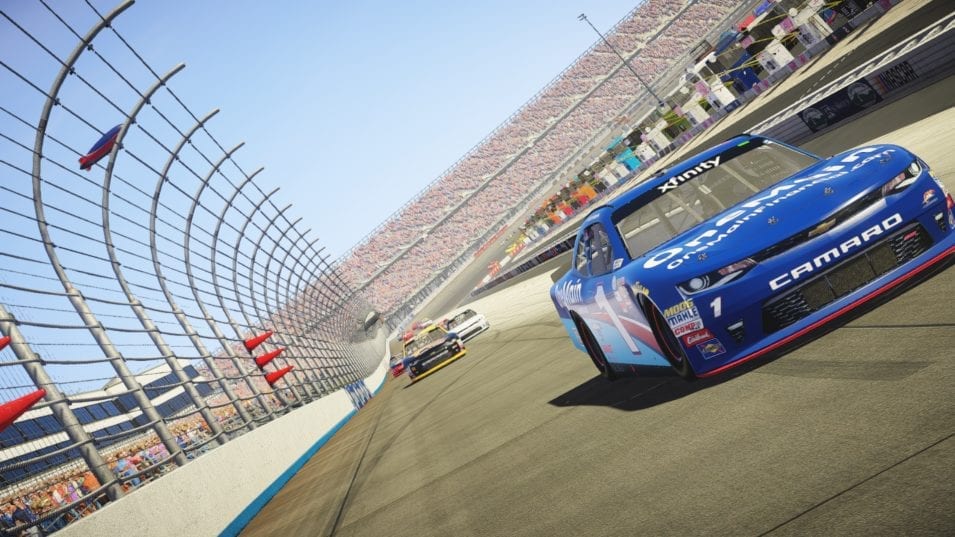 Here we are in 2017 and fans of NASCAR are still waiting for a title that at the very least matches what was developed and released over a decade ago. The drought is real, and so is the frustration. Our requests seem simple enough, right? Give us a title that closely replicates what we see during a race weekend, and we will open our wallets and hearts with unending support. While series like NBA 2K, Madden NFL and FIFA perennially sell two million copies or more, the best-selling NASCAR title sold just over 1.2 million copies — and yes, that’s the best-selling NASCAR title ever.

Now that being said, we are not without hope. Last year, Developer Dusenberry/Martin released NASCAR Heat Evolution. A game created in part with the beloved developer Monster Games, original creator of NASCAR Dirt to Daytona back in the early 2000s. This year, while under a new moniker of 704 Games, they hope to build on the foundation of the first iteration.

While NASCAR Heat may have may have lacked depth, a few areas in which it did excel were the driving model and competent AI ability. Obviously one does not have to be a certified genius to understand that those two aspects are two of the most important aspects of any racing title.

It is common knowledge that this year’s NASCAR Heat 2 will include the top three series of NASCAR, what is not known to the general public, is how those three series feel and perform on the track. I was lucky enough to sit down with Sean Burke (Marketing Manager) and Matt Dusenberry (Marketing Partnership Manager) of 704 games to talk a bit about what this year’s game entails. I also was lucky enough to play NASCAR Heat 2 myself, and while at this juncture there are many components that were not yet implemented (pre-alpha stage), the foundation is built and showed a lot of promise.

Initially I  jumped into the Cup Series, and raced a couple of quick five-lap races at Atlanta and Miami, and while my time was short, the duration was long enough to notice the AI seemed a bit more aggressive this year, and a little more willing to choose different lines. The weight felt good on the car, and the ability to navigate the pack in a precise fashion felt great. The one thing that did stand out was the AI’s willingness to be a bit more aggressive in the form of stealing an open spot before I could.  The AI seemed smarter and recognized what potential moves were available to be made. Another aspect that stuck out was the fact that, although I was on the default level of difficulty, the ability to pass multiple cars at once seemed toned down. It was still prevalent, but definitely not as easy to do in the original game on the default difficulty, so that bodes well for the users who like to challenge themselves on the higher difficulty levels.

Next I ran the Xfinity Series at Iowa, and it’s hard to describe how glorious it was to see this track on a console in HD. The cars handled a bit similar, and many had no paint scheme yet, but to drive around this beautiful facility created and designed by Rusty Wallace was almost tear-inducing. The track had the feel and look as if you were actually sitting in the car on the track in Newton Iowa, and that type of organic immersion is not easily accomplished.

Finally I took part in the truck series at Eldora because there was zero chance I was leaving the office without racing on dirt. While there was just a minimal difference between how the Cup and Xfinity car felt, the difference was dramatic in how the Cup and Truck felt. The weight, the handling and the overall driving physics made you feel like you were driving a sanctioned Camping World truck around; and while that may seem like a “well it should” type of moment, the fact remains it does feel that way, and it’s welcomed and appreciated. I was surprised with how good the dirt physics felt while driving the truck. While it didn’t require a master-like driving skill and ability of say iRacing, that was never the developer’s intent. Please do not let that last comment worry you at all because the dirt physics felt and looked great, and I have no doubt that this will be an extremely popular series racing online. And for those of you wondering, the answer is yes, all three series will be available to race online.

After my time with the game was done, I spoke with Sean and asked what the main focus was for this year’s title was? “With NASCAR Heat Evolution, we established a strong racing foundation,” said Burke. “In NASCAR Heat 2, it was all about fine tuning that experience and adding in a bunch of fantastic features. Obviously the biggest focus was adding in the NASCAR Camping World Truck Series and NASCAR Xfinity Series. Adding in these other series involved new vehicle models, new views, new sounds, new physics, new tracks, new drivers, and much, much more.”

For many fans of the title, scouring the internet for information about this year’s title is not uncommon, so I spoke to Sean about what might be the most surprising element of this year’s title to the community? “[The amount] of focus and work we put into the Career mode of NASCAR Heat 2. We’re not ready to talk about it just yet, but fans can expect news this summer.”

And that answer lead me to my last question of the day, which was what is the one aspect of this year’s title that 704 Games is most proud of with NH2? “I wouldn’t say there’s one particular feature we’re proudest of, but more of a collective feeling of accomplishment. It’s all about the fans for us. We listened to fans in the months following NASCAR Heat Evolution’s release. Players will be impressed with how many of their requests we were able to pack into NASCAR Heat 2.”

Final Thoughts On Our Time With NASCAR Heat 2

While I can’t talk about everything I saw just yet, what I can say is that I am extremely excited to get back to the office in late July and play the newest build, which will be close to the final build. There were a lot of positives to take from my short time, and potentially the wait may be over for long-suffering NASCAR console video game fans. There is still a lot of time between now and the release date of September 12, but all things seem to be trending in the right direction for this year’s title, and we can only hope that the final product will put many of the community’s concerns and wants to rest — finally.