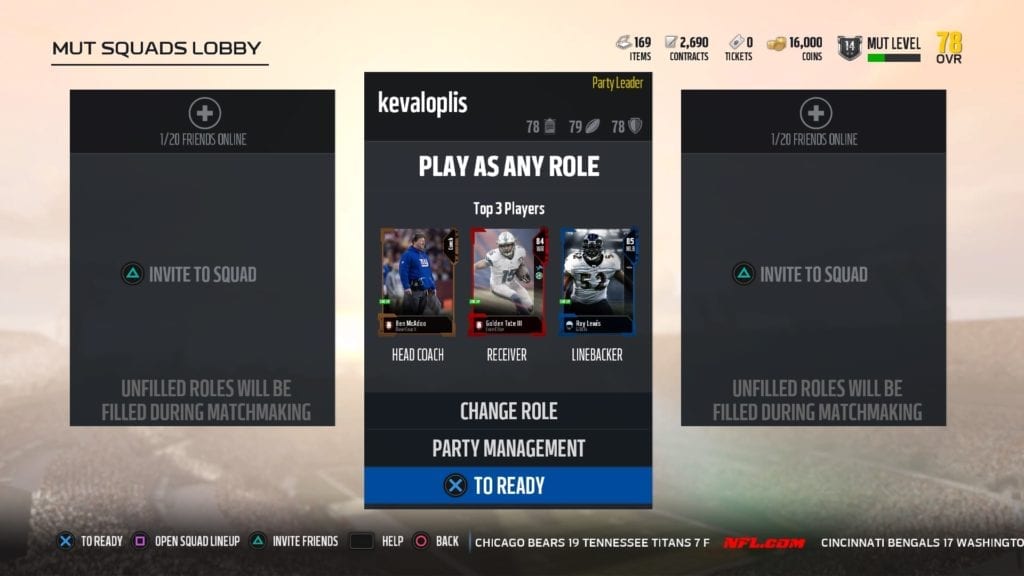 The first thing you‘ll probably notice about the new Madden Ultimate Team Squads mode in Madden 18 is that there’s not really a whole lot to it. But even though the nascent mode that allows up to three players to suit up together for the same team may be a little thin in its rookie year, there’s more enjoyment to be found in this small package than you might expect. Predictably, there are some issues that need to be tuned or rectified in order to improve the mode for next year (assuming it makes a return for Madden 19, that is), but it fully delivers on the promise of co-op gaming that Madden has lacked for years now, and sets the table for an exciting future for the franchise in the multiplayer department.

One thing that’s pretty obvious is that the co-op experience is greatly improved by having friends as teammates rather than the complete strangers that can be found through matchmaking. Aside from the obvious fact that you’re just bound to have a better time hanging out with your friends rather than some people you just met, the communication is sure to be much more good natured and less combative as well. While giving up a touchdown or running the wrong route can cause a team made up of strangers to quickly turn the experience into an awkward and uncomfortable one that’s often filled with plenty of expletives and heavy doses of shaming, the same events would probably end with some gentle ribbing while surrounded with friends.

Playing To Your Strengths

Being part of a team means taking stock of what you can bring to the proceedings. MUT Squads allows the offensive captain to bring in the offensive players and playbook, the defensive captain to come armed with the defensive players and playbook, while the coach comes equipped with the head coach (obviously), the stadium and the uniforms. It’s important to identify which of these roles allows you to bring together a team that’s putting you in the best position to win. For some, this will mean setting your ego aside and recognizing that you simply don’t have the kind of players to be anything other than head coach. After all, there’s a reason it’s the recommended role for those who are new to the mode.

Going On The Offensive

You’ll probably find that for most of your time on offense in an MUT Squads game, you’ll have users controlling the quarterback, the running back and probably a receiver. For whichever player controls the quarterback in a MUT Squads game, the experience won’t be all that much different than a regular solo game, aside from the fact that they’re no longer always taking command of the running back or receiver when they hand off or throw. In fact, one of the biggest difficulties in playing QB in a Squads game is learning that it’s not always a good idea to lock onto a user receiver and throw it to them every time. For those filling other positions, being a running back will be pretty straightforward, but playing as a receiver is a whole different ball of wax.

Running routes, for one thing, can be pretty tricky as the controls take some adjustment to get used to making cuts and timing your release at the snap, but it’s imperative that you follow your play art or risk being on a different page than your quarterback and causing an incompletion or even an interception. Blocking is another aspect of the game that you’ll need to learn to master on offense and it’s surprising how rewarding it can be to help spring a running back or receiver for a big gain. On the flip side, it can be plenty annoying when someone misses a block and the ball carrier gets hung out to dry.

On the other side of the ball, things won’t seem quite as foreign, but there are still a number of things that you normally would not think about when playing solo. Because all three players can be any of the 11 players on defense, there’s some strategy involved in how you want to divide defensive duties among yourselves. The easiest approach is to have someone be a defensive lineman, someone be a linebacker and someone be defensive back, thereby allowing you to have a user patrolling each line of defense. But then you still have to decide who’s better suited for each of these roles or perhaps figure out a better plan of attack that plays to your team’s skills. Whatever you decide, it’s never been more important to have a mic when playing so you can properly communicate any last-second assignments or adjustments to avoid the kind of breakdowns that will have the three of you starting to point fingers at each other, and soon unraveling if you’re not careful.

Where Do We Go From Here?

As it stands now, MUT Squads passes the initial test in that it can be a whole lot of fun. However, there are some areas where it could stand to use some improvement in order to increase the enjoyment if the mode is going to evolve in the future. The first thing that should be done is to expand the mode from this rather bare-bones introduction to include things like rankings, stats and better rewards for long winning streaks. Aside from this, the action on the field can sometimes get a little disorienting if you happen to be further away from the ball and it would be nice to see some refinement to the camera in MUT Squads, perhaps utilizing something similar to the EASHL camera in NHL 17 that allows you to better keep track of yourself but without losing sight of where the puck is at all times.

Also, one of the biggest disappointments in the mode is how often your stranger teammates will quit (even when they’re ahead), which eventually renders the mode pointless if it ends up being just yourself playing. Ideally, it’d be great if the mode was able to find someone else to fill the role of any teammates that quit like in Rocket League, especially if it’s a close game or one that’s still early.