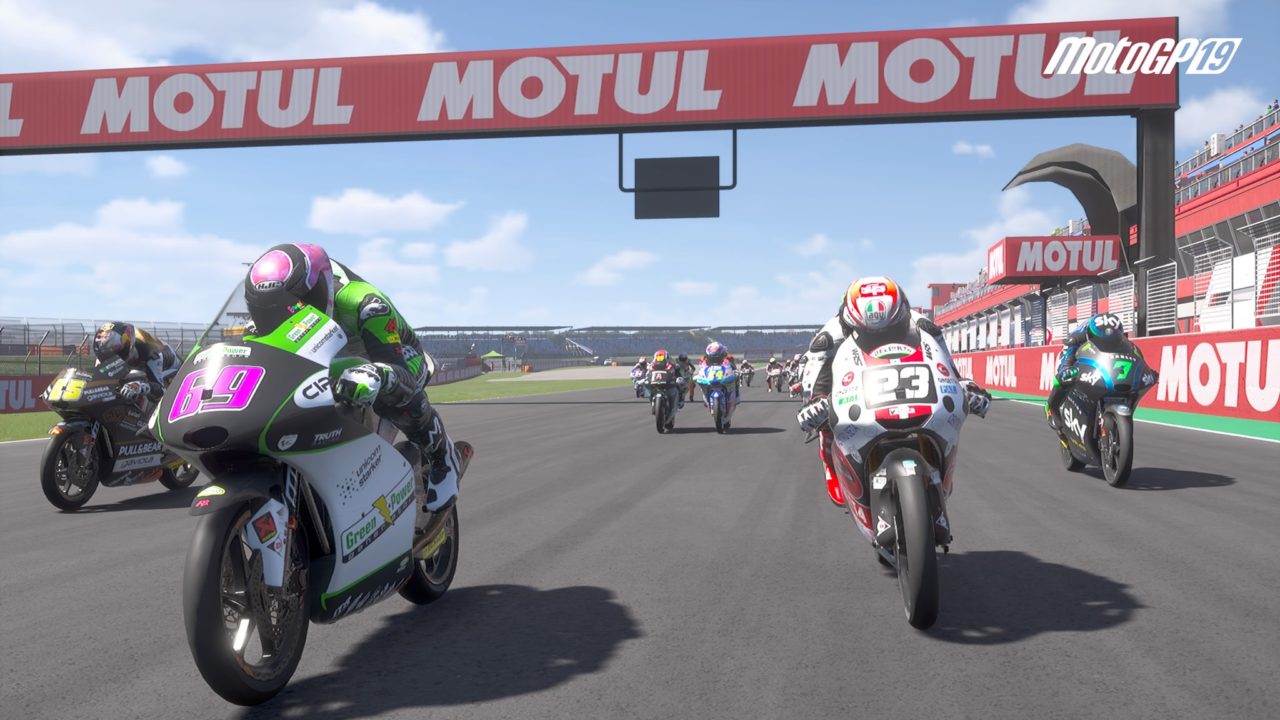 Milestone is back with the latest iteration of the MotoGP series, aptly named, MotoGP 19 — the official game of the MotoGP motorbike racing world championship. Milestone has delivered some strong racing titles over the last few years and pushed itself to the forefront of the sport, at least in terms of delivering a solid video game experience. So is there enough improvement in this iteration to warrant a purchase or should fans leave the bike sitting in the garage for one more year?

As with last year’s game, the bike handling is smooth and responsive, and allows the user to approach each sweeping or S-turn with relative confidence. There is a fine line between having controls that feel too arcade or too sim, and for the most part, Milestone has delivered a very nice mixture of the two. 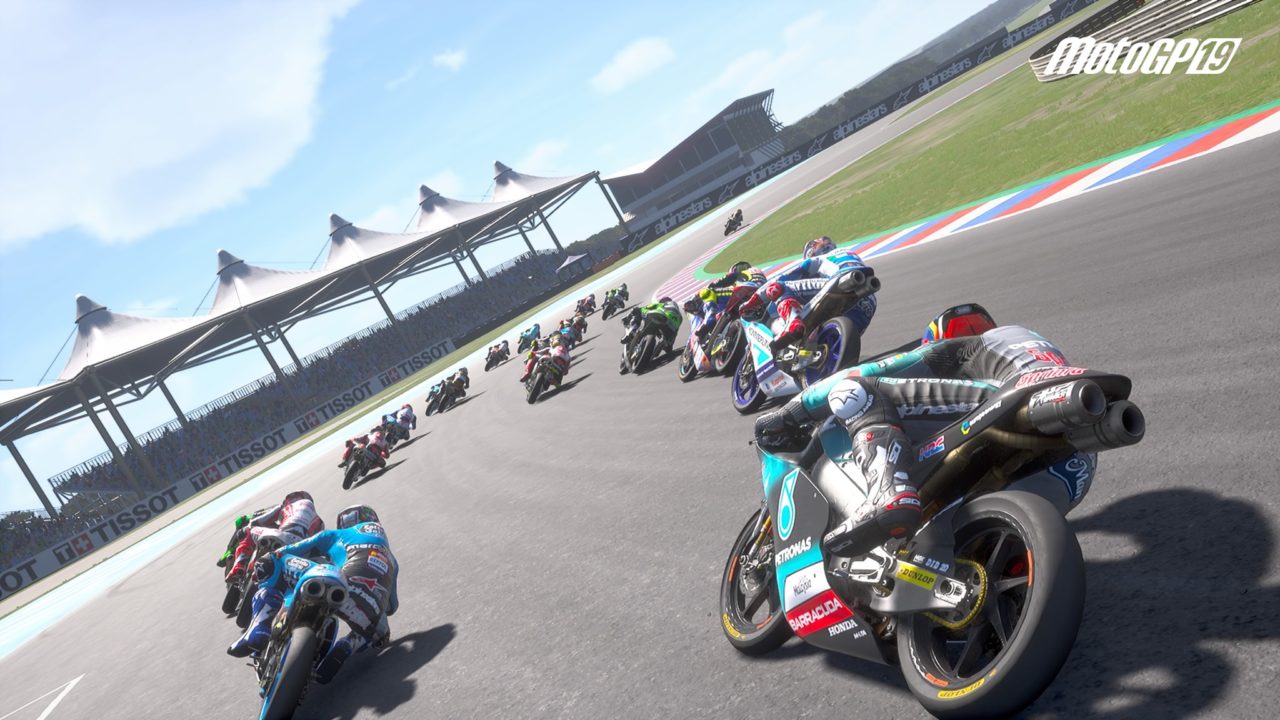 For my money, there is no better feeling than sweeping into a turn, dropping your nose underneath an opponent and accelerating at the apex of a turn to take over that position. And the control scheme in MotoGP 19 delivers that feeling and experience almost perfectly.

Of course, as with most games, MotoGP allows for different assists to be turned on and off to help alter the experience in a way the user sees fit. If you are new to the series and need to utilize the assists as you become comfortable with the game, please at least turn off auto-brake.  Auto brake will slow you down in areas where it’s not needed and hinder the rhythmic consistency needed to be successful in the game.

Milestone has delivered a new type of AI with MotoGP 19, called Neural AI. Basically, the claim is that the AI will actively learn, and you’ll now face smarter, faster opponents who will exploit your mistakes. That said, I don’t love the AI in MotoGP 19, but I did find the aggressiveness, fairness and ability to choose different lines quite enjoyable. Make the smallest mistake in a turn and the AI will pounce on the opportunity to take your position. Try to be too aggressive against your opponents, and they will ride you off the track.

The only real issues I have with the AI riders are that they don’t battle each other all that hard and are limited in the mistakes they make on their own when you are not involved. Are these issues something that the new technology can also advance and improve on? I’d like to think yes, but time will tell.

Milestone just understands how to deliver a title with a litany of options that allow users to tailor the way they want the game to feel, and MotoGP 19 is no different. Whether it be AI difficulty, weekend weather conditions, weekend GP options, bike difficulty, assists or many more, MotoGP 19 lets users decide how easy or difficult the game experience ultimately feels, and these options can be modified at any point. 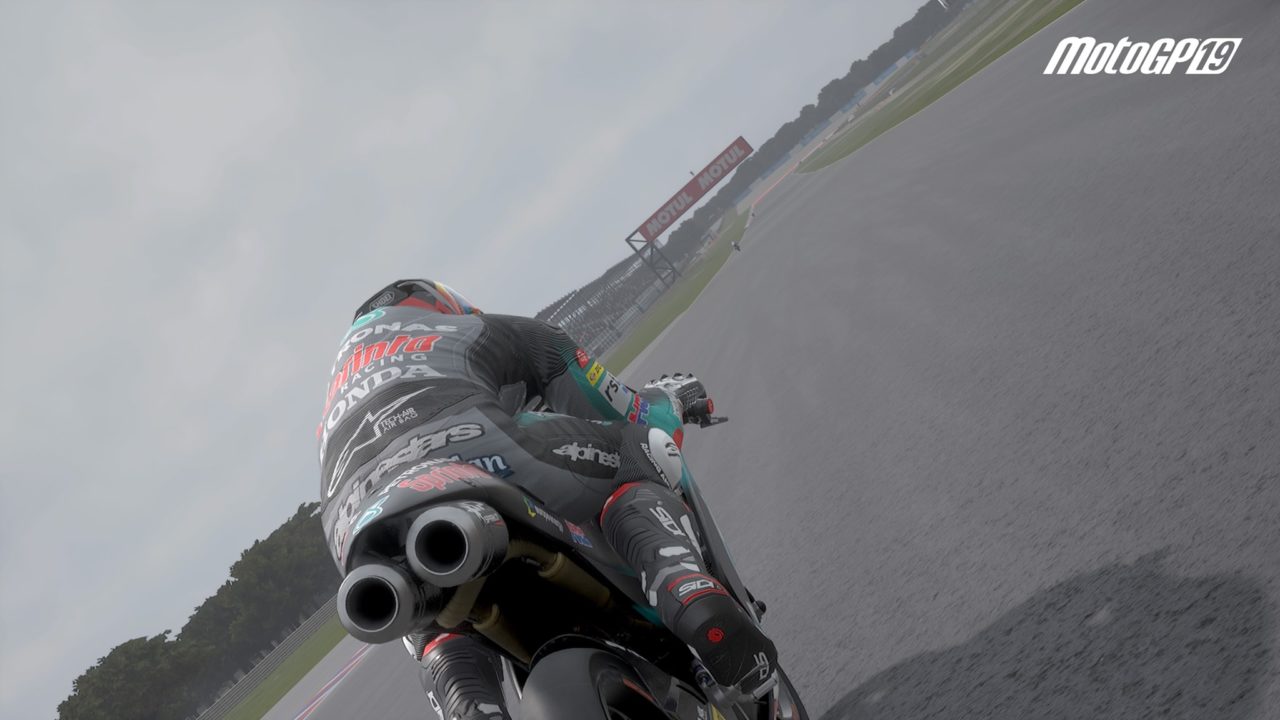 More than just game options, MotoGP 19 offers the user a heavy dose of actual game modes that can be played both offline and on. Offline players can participate in career mode, full Grand Prix, full championship or simple time trials. Online players will find the offerings a bit sparser, as no championship or league options are available, but still can race in a public race, create a private race or create an event as a race director.

Fans will also now have the chance to race in multiple eras of the sport as this year’s game delivers a new experience in the form of Historical Challenges. The game lets users choose from great rivalries, the genesis of the sport, 500CC heroes and the modern era. Each offering feels different and unique enough that many will find themselves allocating some hefty time to the mode.

I still want to see a bigger list of modes and choices in the online department, but to Milestone’s credit the studio did implement dedicated servers to help mitigate the lag issues from previous online experiences. Overall, the amount of game options and modes delivered in MotoGP 19 is impressive.

If you are familiar with any other Milestone offerings and career modes, then you will feel right at home with what ’19 throws at you. The game gives you an option to start in a feeder series like MotoGP 3 and 2, and then you can work your way to the top MotoGP series. 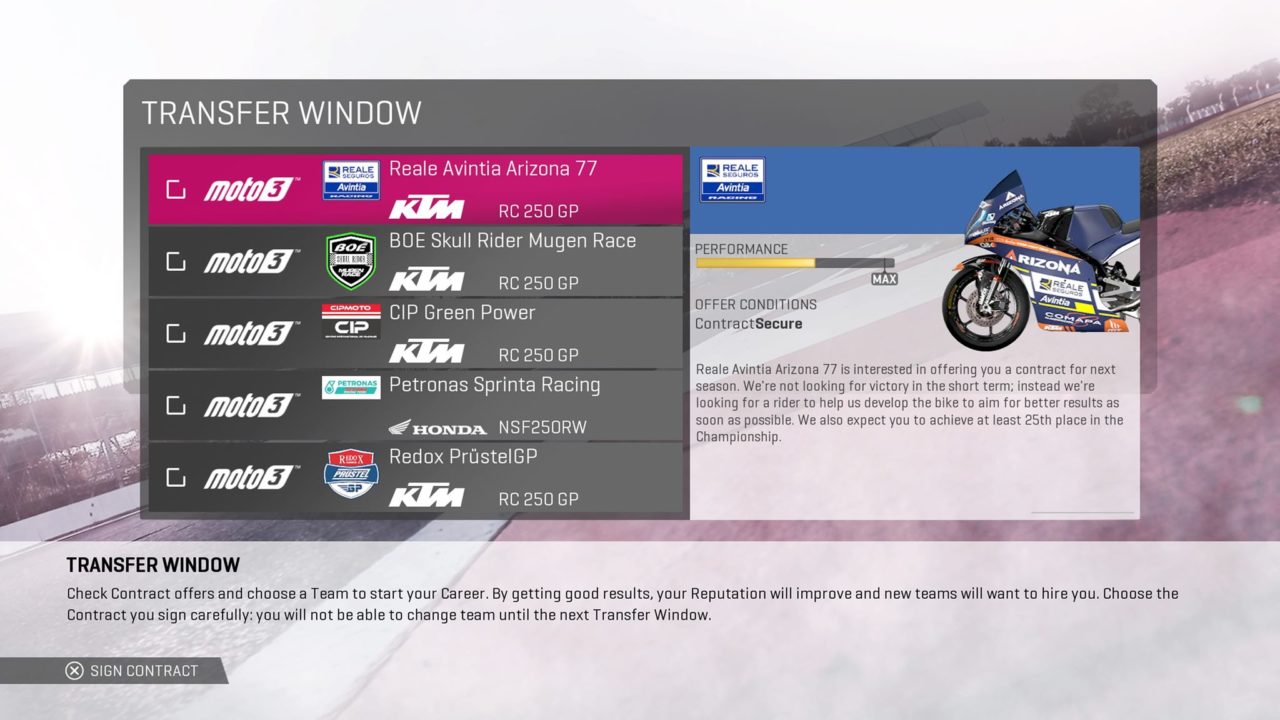 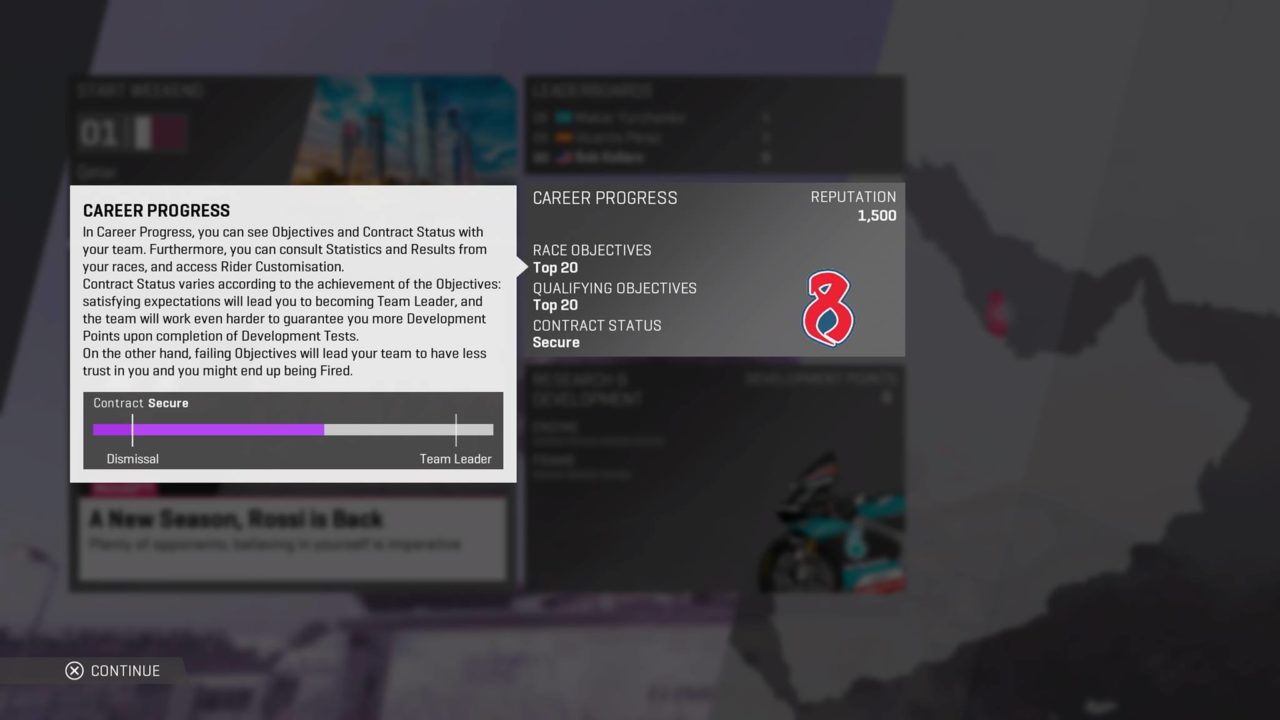 As you move along your career path, you will have the option to move up to the next series, or stay with your current team and help turn it into a perennial juggernaut. There is a lot of depth and options when it comes to career mode and helping improve a team provides a lot of enjoyment. The choice to move up will be yours, but take your time and enjoy the ride.

While Milestone tends to approach graphics as a secondary concern, I was still expecting a bit more after seeing the improvements that were implemented in Monster Energy Supercross 2. MotoGP 19 delivers a graphical experience that feels a bit “late cycle” PS3 or early PS4. 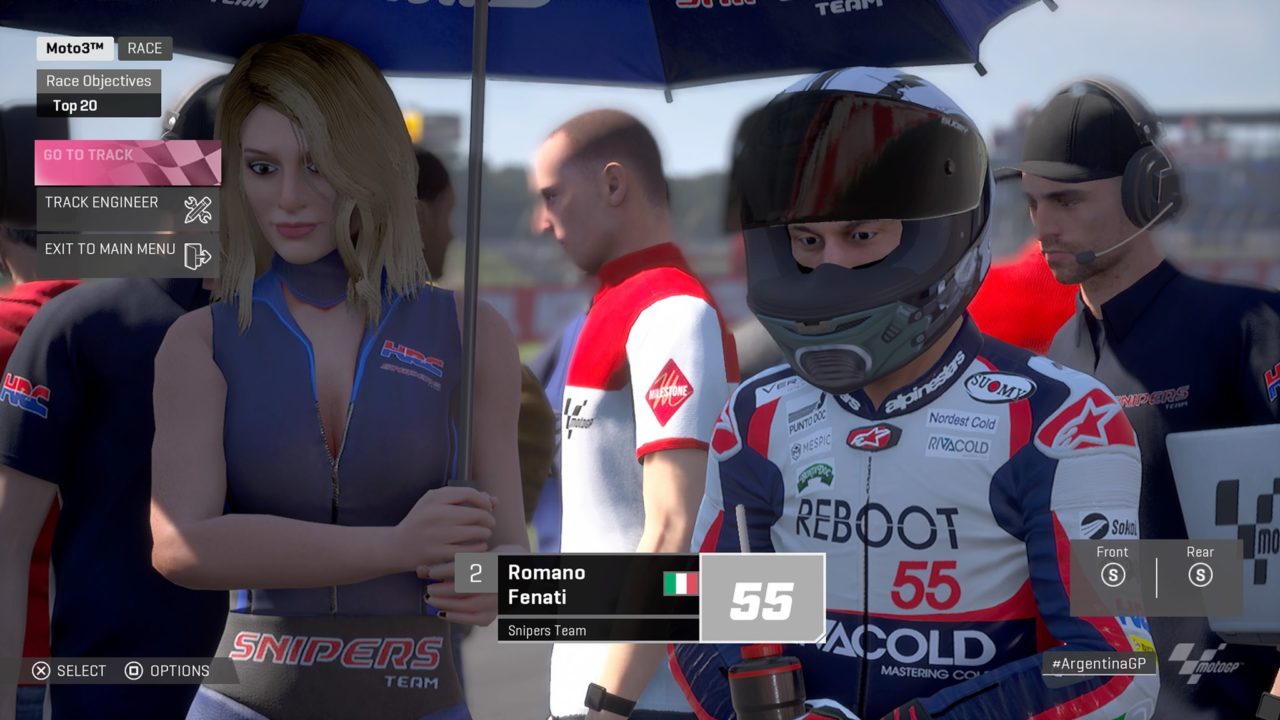 Once I’m on the track, most of my graphics concerns tend to fall to the wayside. Nevertheless, the fun experience the developers have delivered on the track would be better amplified if the same sort of effort was spent on the aesthetics.

While there has been an improvement from ’18, I still find the load times to be bothersome. If you played ’18, you might be happy with the improvement, but if ’19 is your first foray into the series, the load times will be noticeable, and not in a good way.

In the end, MotoGP 19 is an improvement over last year’s edition, but it still has areas that can be improved upon. Those looking a for an ultra-realistic racing sim may be a bit let down, but those looking for a challenging and fun experience with some solid depth to it need look no further. Even if motorcycle racing isn’t necessarily your thing, the game provides enough in-game information to steer you in the right direction as you learn your way around the sport.