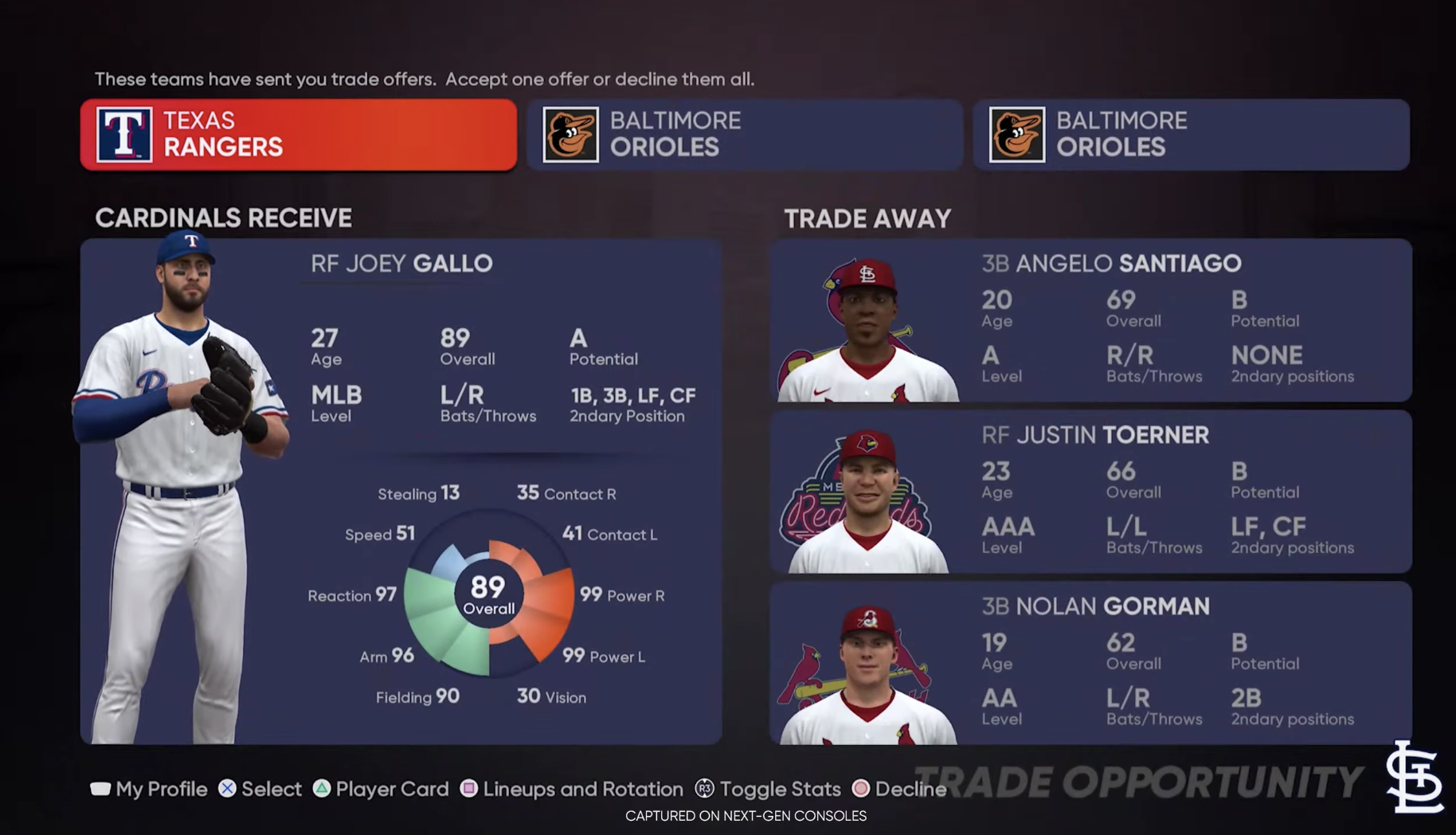 San Diego Studio has released the latest feature premiere highlighting franchise mode and March to October for MLB The Show 21. The focus was on quality-of-life changes, logic upgrades, and building some infrastructure for the future of franchise mode. For MTO, the focus was more on building out the minors, removing lineup headaches, and making the postseason pop more while still getting added Diamond Dynasty rewards.

But, look, let’s talk about things at a high level first in terms of messaging. There’s going to be plenty of unhappy franchise mode fans coming out of this (and some happy), and we get it. The public relations side of this is really hard for SDS. As a consumer, even if you buy removing year-to-year saves occurred because the logic changes and under-the-hood stuff that was done made it a necessity, it’s still not going to remove the sting of losing that long-term save. On top of that, nothing was explicitly stated as the reason why year-to-year saves were removed, and that probably should have been touched on in the feature premiere to some extent. Lastly, if you had been carrying over saves for years, nothing added this year is groundbreaking enough to make up for the value lost.

Additionally, we as consumers are not privy to the day-to-day grind that maybe goes into changing all these things under the hood — we only see a final product. Thus, you get skepticism from some sectors of the community because all we see is a final product for franchise mode, and that final product can lead some to say “this is it?” Regardless, we’re not trying to tell you how to feel or not feel, but we’re trying to frame this from both a developer and consumer standpoint in terms of where the disconnects are going to happen.

So, our viewpoint when chatting about this stuff is take it at face value. The “promise” seems to be future years and changes will be easier due to some of the improvements made to franchise mode this year. This is a different sort of promise than the Madden team made where they were more explicit that change was coming, but the outrage was also louder there. Logically, you don’t remove arguably the best feature (year-to-year saves), which is unique in the industry, unless you have a good reason to do that. This is even more true because by removing it, SDS now arguably has the worst franchise mode of the major sports. The created content does a ton of the heavy lifting to hide that — and there isn’t an MTO equivalent in other games if you want to create excuses for SDS — but the point remains the ins-and-outs of The Show‘s franchise mode needs to be improved now at an accelerated pace.

In short, while it was not explicitly stated today, we’ll believe that future years will now accelerate in terms of improvements for franchise mode. So, no, it doesn’t seem like interleague schedules will change year to year. It doesn’t seem like the draft and scouting has been touched much. We did not hear much about custom leagues, and we didn’t see a mention about season length options. We’re still locked into three players at most on one side of a trade. We’re not sure if in-game AI bullpen and lineup logic will be up to snuff. The wishlist itself is endless, and a lot of the big ones were not touched, but let’s dig in and cover what’s here. 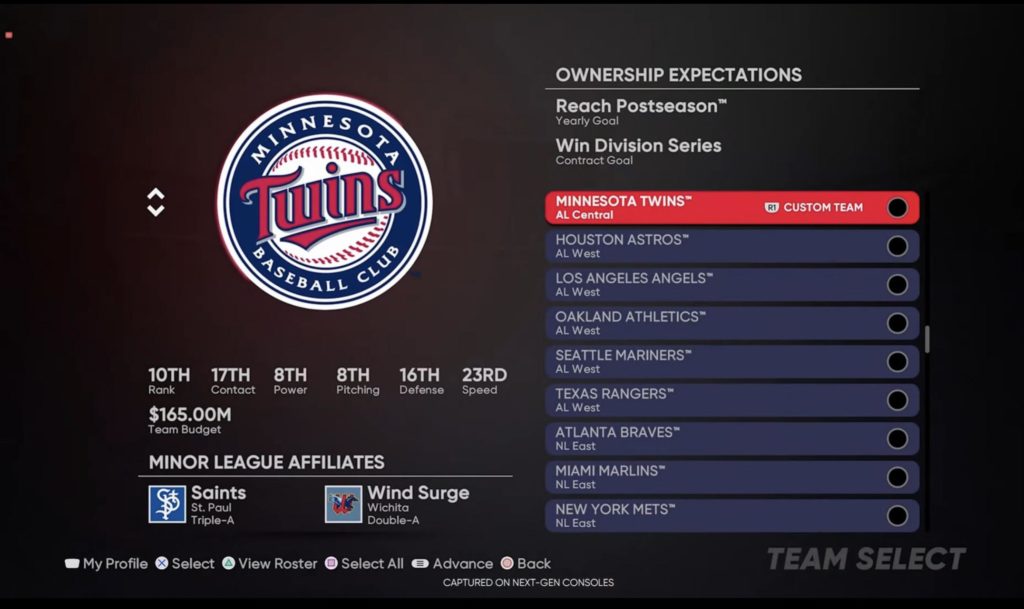 The discussion around this year’s version of franchise mode was built around getting back to the GM roots of the mode by giving users the ability to build the organization from the ground up. That begins with revamping the core backend structure of the mode, including how players themselves are evaluated. SDS states that without making these evaluations better, nothing the team wants to do in the future will make sense.

Player projections will now carry far more weight in trades and free agency. Also, for the first time in franchise history, contracts and value, including how a player projects to develop over the next several years, will bear a heavy weight in terms of player value in all facets of the mode. In theory, this is great because cheap, team-controlled assets will finally carry the value they should. 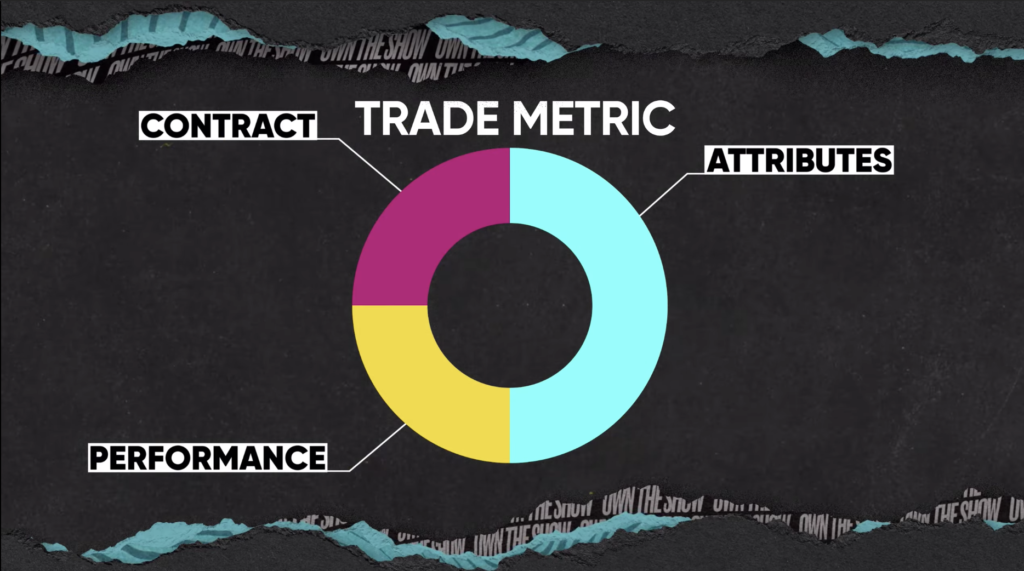 All of these components will now dictate a player’s value. SDS is calling this the “player metric.” Player metrics will hugely dictate contracts, trades, and call-ups and send-downs.

Some of the biggest changes players will find this season will come under the hood. Logic upgrades, like trades and player metrics, were a huge emphasis in this year’s development cycle. One major issue for franchise (and to a lesser degree March to October) over the years has been unrealistic trades killing the feeling of immersion and overall balance. We could argue the trades on display do not totally assuage our fears, but we can’t really dig into trade logic without having the game. This same concern goes into signing logic since Lindor was on display taking a contract well under what he just signed for in real life yesterday. 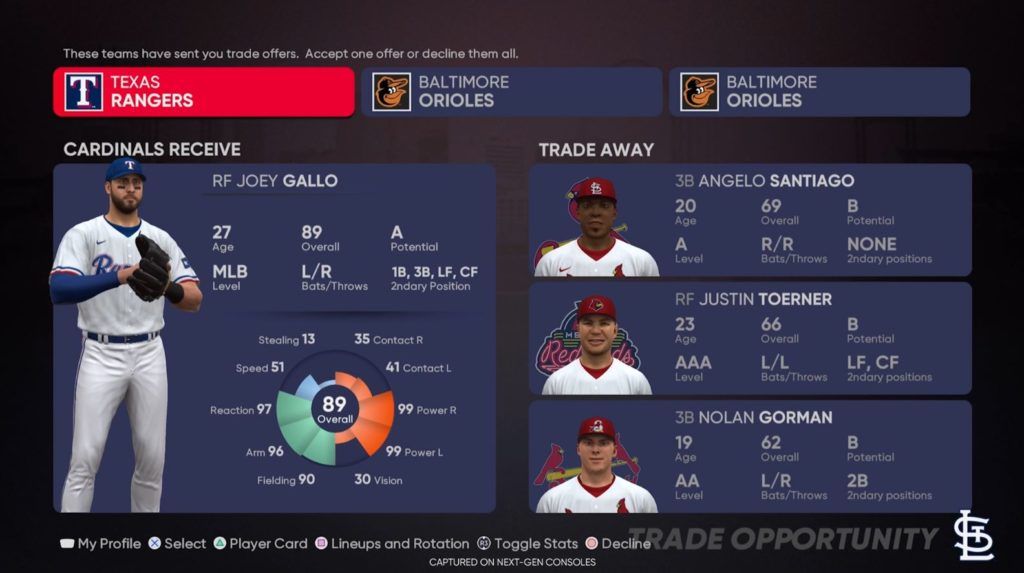 Also on the subject of logic, lineup AI was a focal point in development this year and should feel more true-to-life in MLB The Show 21. In the past, user preferences/settings would too often be disregarded by the CPU when re-inserting injured players or utilizing call-ups during periods of simulation. This would often result in top prospects sitting on the bench for long periods of time before the user took notice. This, as you can imagine, would have an impact on player development. That should be improved in franchise mode and March to October this season. One other notable positive consequence of this could be that rosters we download will be easier to push right into franchise mode without having to worry about the AI scrambling everything on Opening Day. 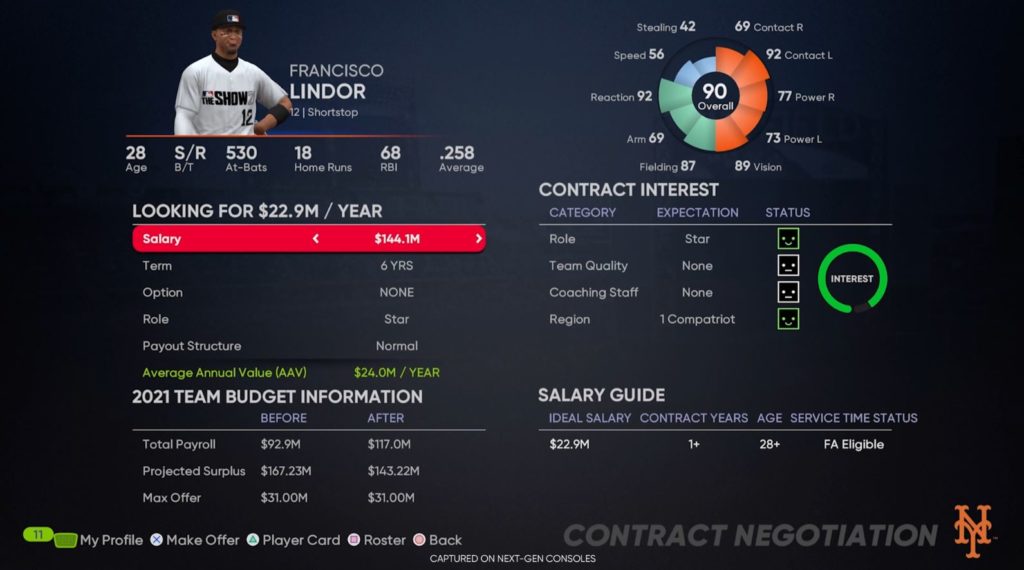 One piece of the puzzle that should act as a catalyst for improved lineup logic is the new depth chart user interface. Instead of relying solely on your handedness lineups, the depth chart will help tell the CPU who should be second-in-line should a regular need a day off or a more extended stay on the IL. 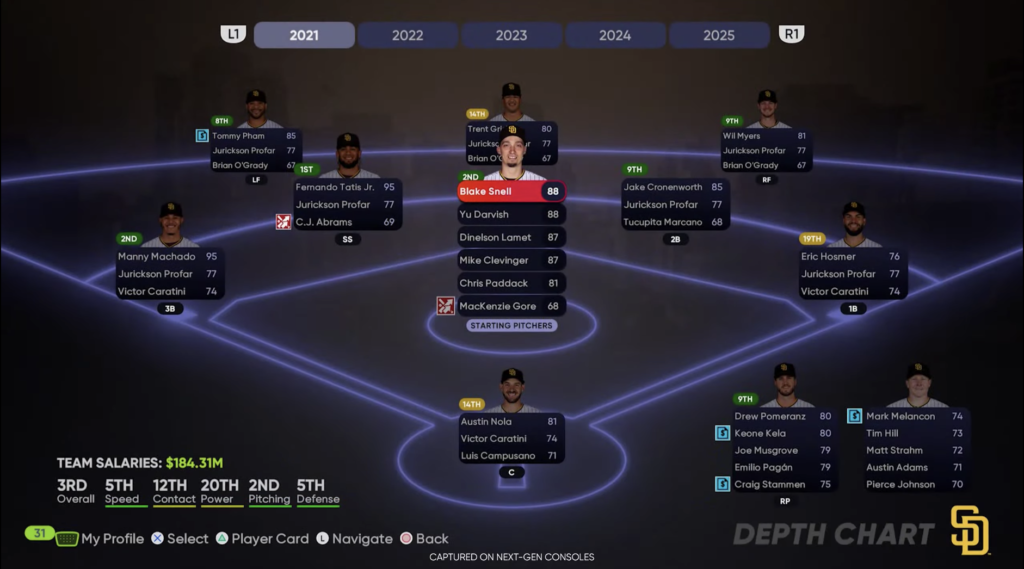 The coolest function of the depth chart feature this year is the ability to truly project out where a player might be a few years down the road, that way you can plan ahead financially and strategically. In the example provided, Wander Franco is a 67 overall in 2021, but by 2024 he may be an 85 overall. If that’s the case, spending long term at the shortstop position may be ill advised with such talent already in-house. 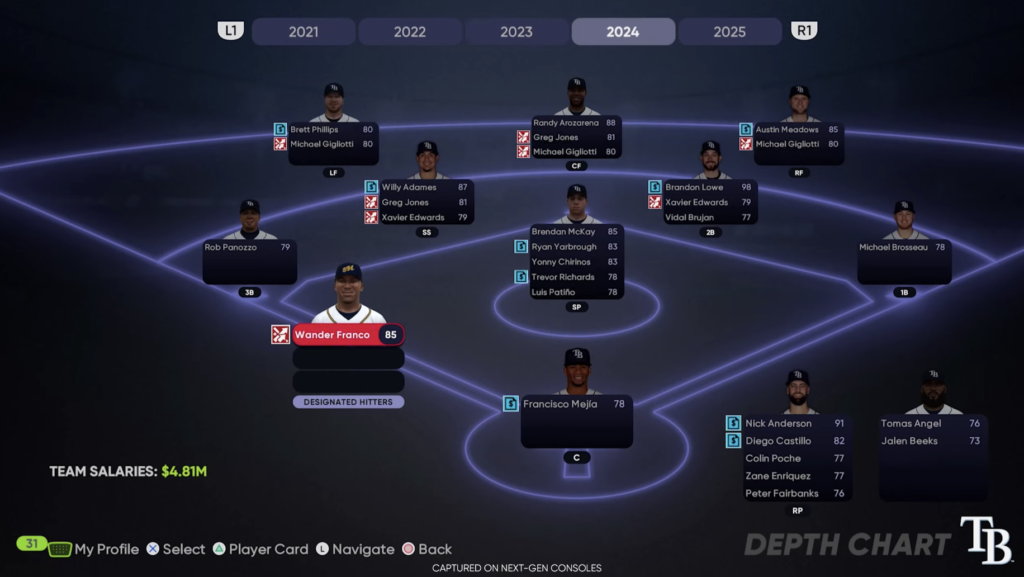 One other depth chart element to notice — albeit it wasn’t explicitly discussed in the feature premiere — is positional flexibility showing up more. It’s arguable Wander Franco should not be at DH by 2024 as Adames stays at SS in the example above, but we also noticed C.J. Abrams moving from SS to LF as he got older in the Padres example. In the Rays example, we noticed Michael Brosseau moving from 3B to 1B as the years progressed there.

Lastly, inside the depth chart, you can also work on contact extensions, trades, as well as call-ups and send-downs. It’s a one-stop do-it-all hub. 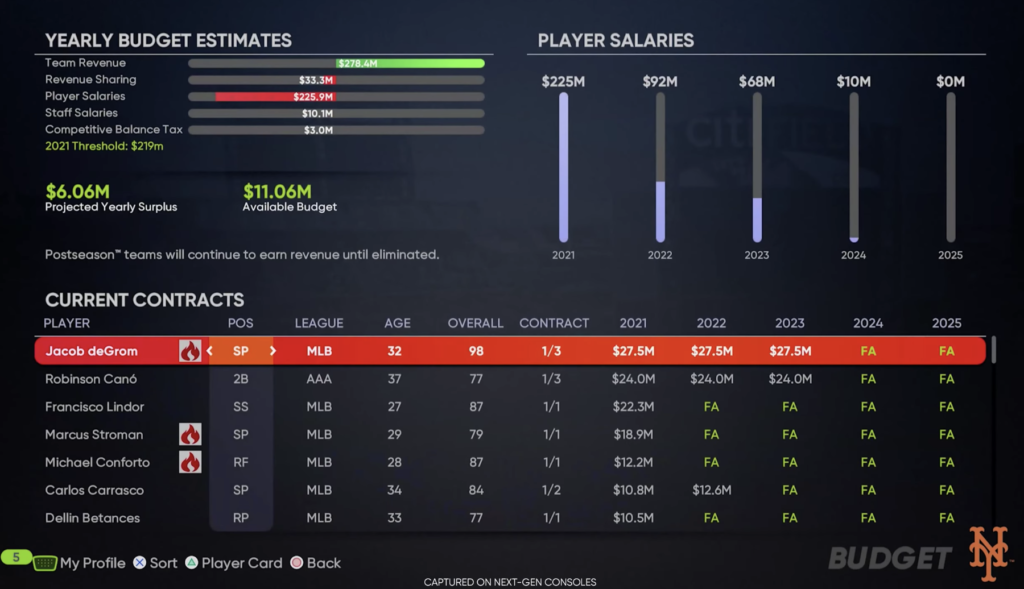 Another quality of life change coming to franchise mode is a reworking of the budget system. Over the last several years, budgets were presented as a weekly spend, and it made it awfully difficult to decipher how much money you had to spend in free agency. This was made even more difficult because free agent contracts were presented in annual salary. Budgets will be presented in annual-form this year, and while It isn’t a life-changing move, it’s certainly a welcomed change considering the headaches and confusion from past iterations of the game. 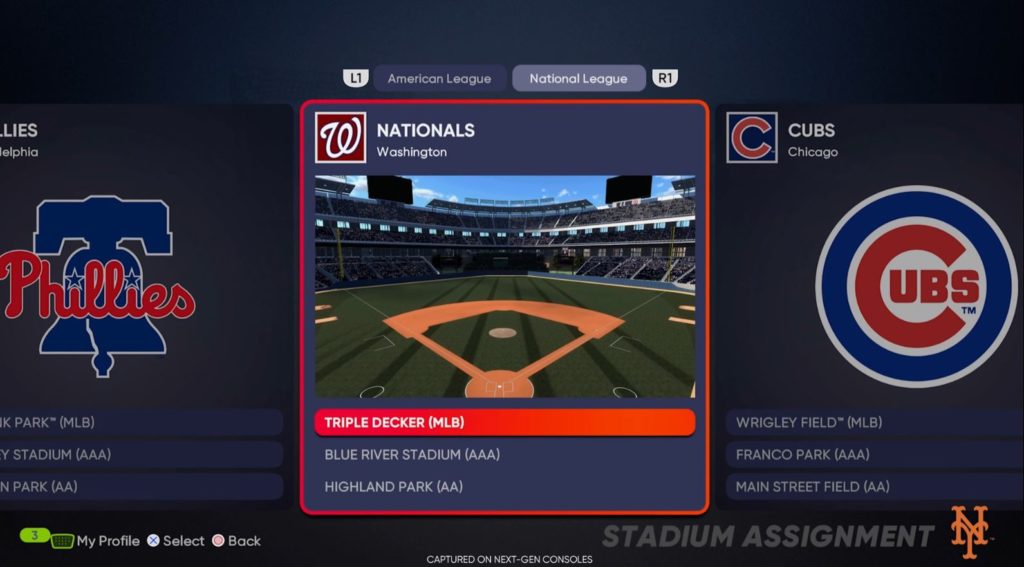 Some other things were confirmed. Stadium creator will be available in franchise mode and there are minimal limitations on the hijinks. Unlike Diamond Dynasty, whatever wonky stadium dimensions your heart desires will be available. (Again, keep in mind, this feature is only available on next-generation consoles.) You can import 30 stadiums, and you can set the stadiums for both MLB and minor league stadiums (but that imported number stays at 30. So you can create a stadium for each of your affiliates if you want that to make up 3 of the 30 imported stadiums, or you could set 30 MiLB stadiums, or 30 MLB stadiums, or some mix of the two. 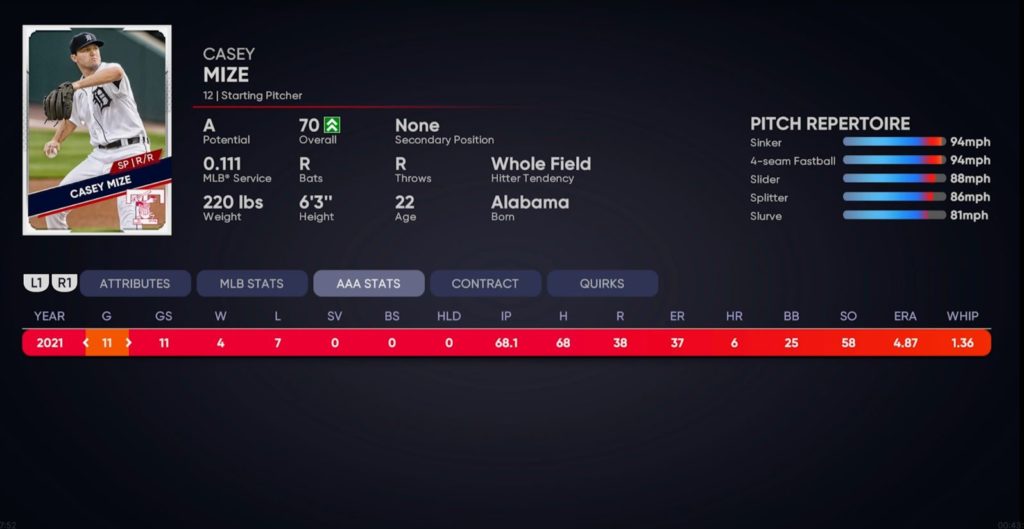 Other small changes under the hood include minor league stats finally being included again on player cards, as well as player morale now having a slight boost inside contract negotiations. However, player morale will not impact in-game player ratings anymore.

Lastly, just to reiterate some of the new sponsorships making their way into the game for apparel purposes. Everything that is not Varo on the bottom row in the picture above is new. This includes 44, G-Form, Easton, B45, and Dinger.

The developers on this stream couldn’t help but harp on how critical this year was in building toward the “vision” and “direction” of franchise mode for this console generation. While the words are hollow in form for now, there is at least an implicit promise about franchise mode seemingly getting the attention it deserves moving forward. 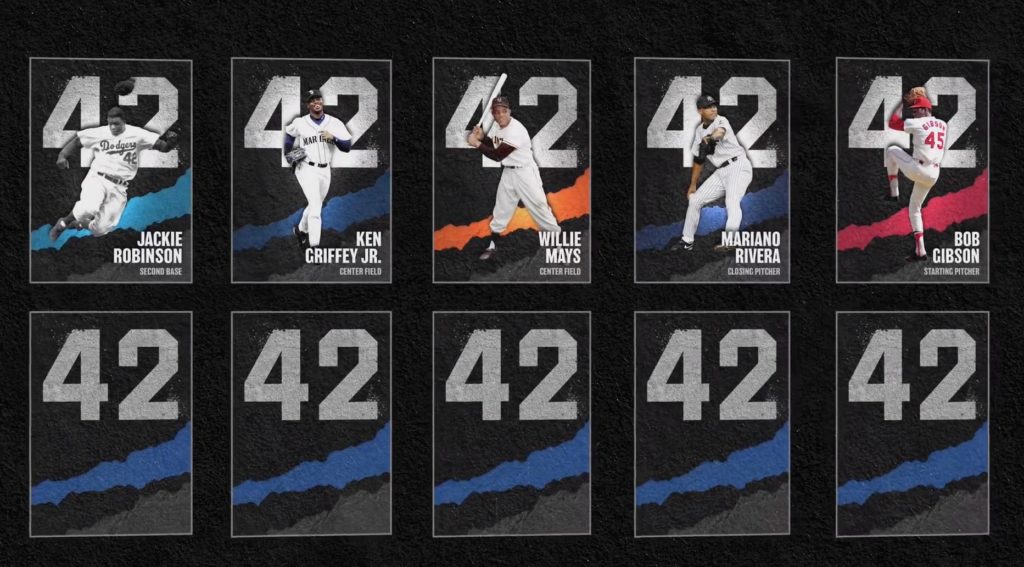 A lot of the stuff discussed already impacts MTO, but specifically on the March to October side, prospects got a big chunk of the attention. They used to have very little value in a one-year vacuum. New minor league player-lock opportunities will allow you the chance to play as a prospect for a game or a series and accelerate that player’s development. After a successful player-lock opportunity, that player can get a massive upgrade, a call-up opportunity and/or a “potential” attribute bump. By and large, prospects should come into play far more this year in March to October.

Also getting a boost, the postseason experience should be more variable this year. There will be more critical moments in the postseason, rather than just dropping players into the fifth inning of games to play the rest of it. You will get more Diamond Dynasty rewards for playing MTO, and it should be a bit more quick getting through seasons to earn those rewards.

Last, but certainly not least, the team unveiled a new card series called The 42. There will be 42 players at launch in different areas of Diamond Dynasty. A few of these players will be available for those who pre-ordered certain editions of MLB The Show 21. Those diamond players include Bob Gibson, Ken Griffey Jr., Willie Mays, Mariano Rivera and Jackie Robinson himself. The other five players who will be in this initial Choice Pack will be revealed down the line.