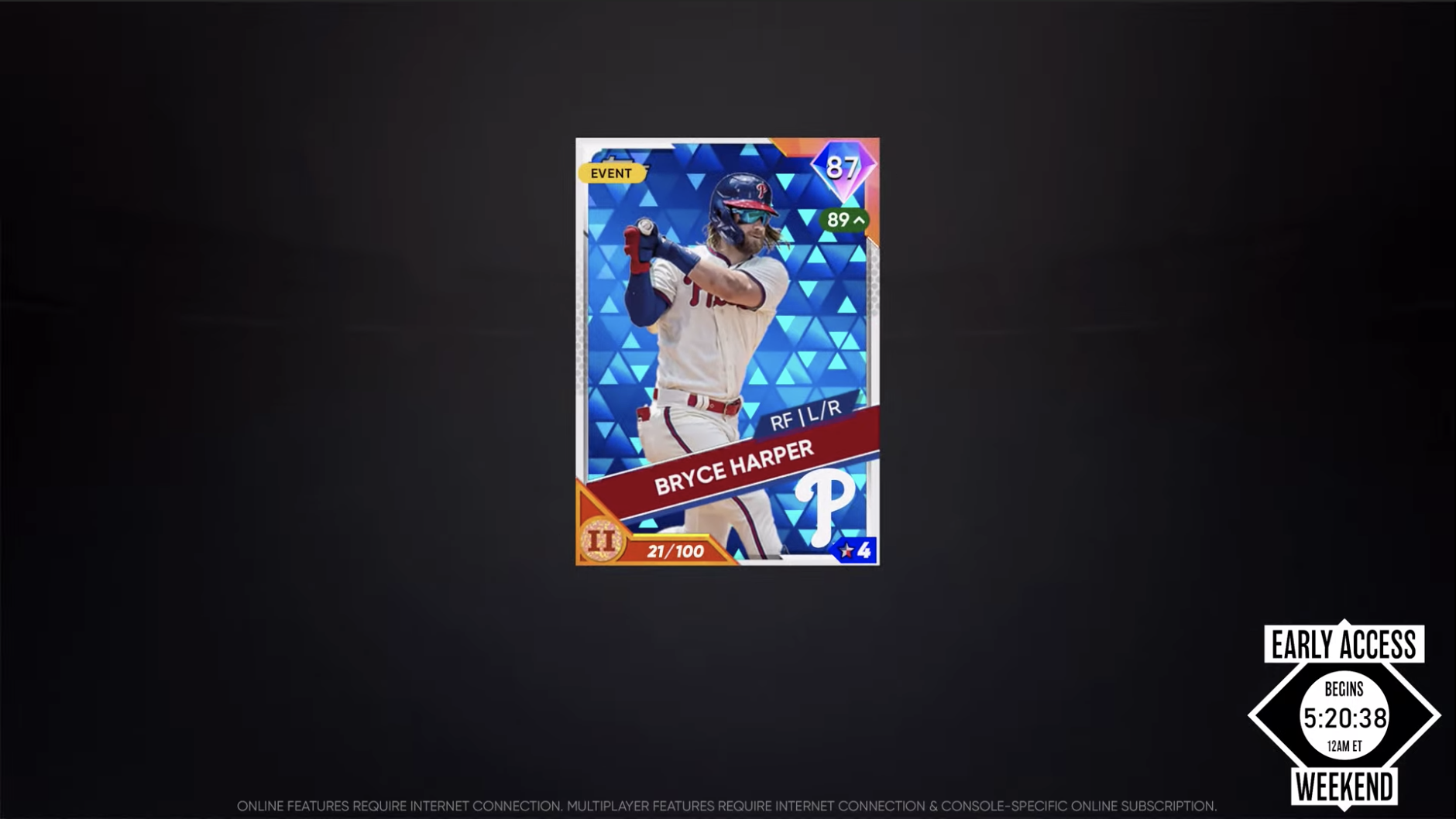 MLB The Show’s Diamond Dynasty mode is incredibly popular and that certainly showed in the feature premiere talking about all the new improvements coming this year. With the addition of Xbox players and an entirely new console generation, San Diego Studio pulled out all the stops to ensure this year’s Diamond Dynasty was one to remember. In MLB The Show 20, I often felt overwhelmed with just how much stuff there was to do and cards there were to collect. This year, with MLB The Show 21 Diamond Dynasty it feels like that feeling will be amplified in a very good way.

It was a beefy stream that highlighted how the mode works for new players, among other things, but one of the biggest surprises they saved was the Community Parallel cards. Let me tell you, this one is going to be a fan favorite. 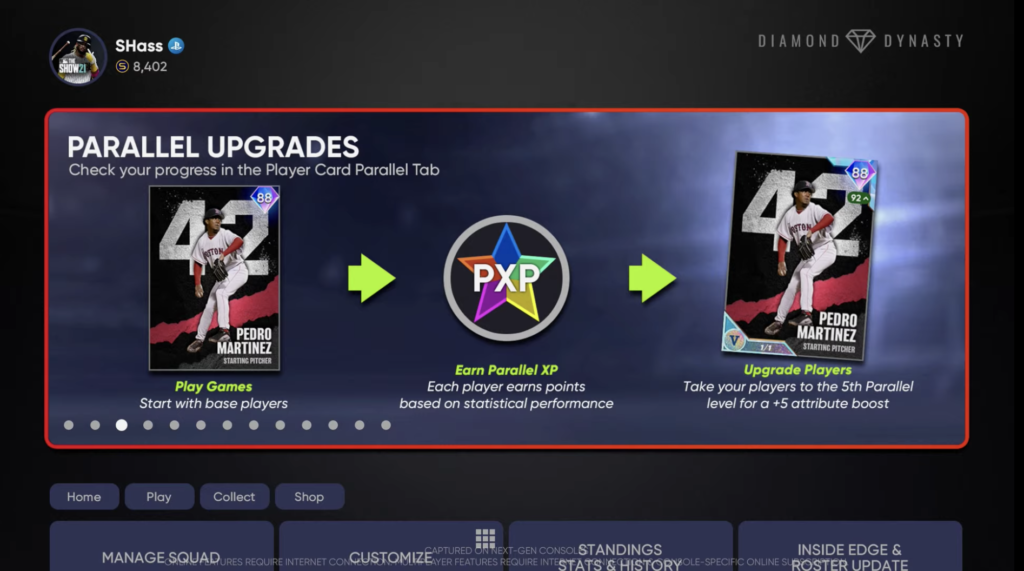 Parallel XP cards are an entirely different way to collect and level up cards. If there’s a specific card you simply mash with and would hate to see leave your lineup after better cards are released, there’s now a reason not to replace him. Every card — every single player card in the game — can be leveled up as much as five times. Every time you level your card up, that player card will receive a stat boost. Going from Level 1 to Level 2 means your player will (apparently) receive a +2 attribute bump in every category. Even cooler than that, when you reach a certain level with a card, your player card will feature a #/X emblem in the bottom left corner. 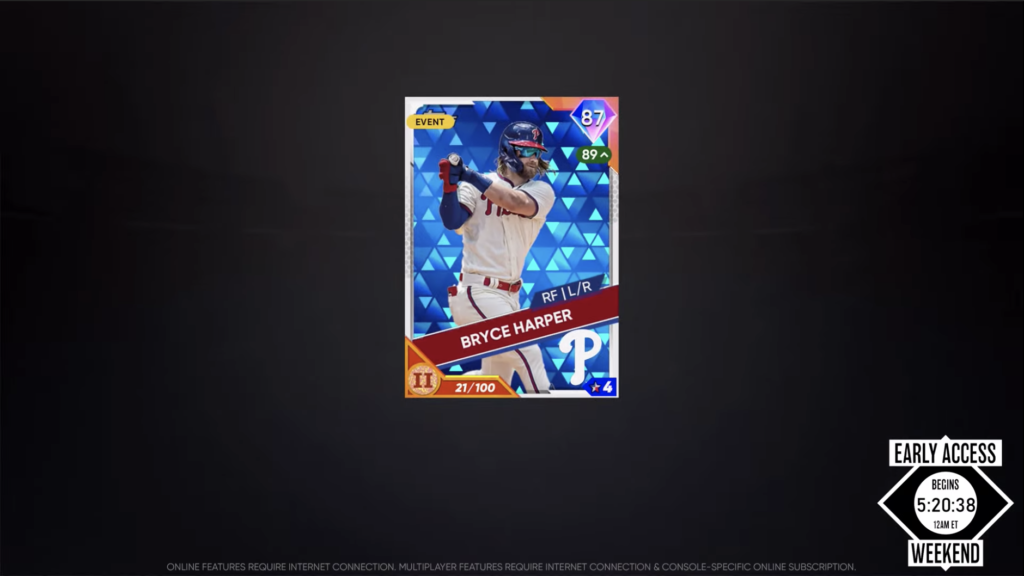 In a day and age where sports card collecting is going through a boom period, MLB The Show 21 is playing off that industry a bit here by making cards feel even more rare and unique — much like we’re now seeing with things like NBA Top Shot. This is objectively an awesome feature, especially if you have a favorite player in the league you’re planning to ride with all year long.

Upgrading cards takes place by simply playing the game. Plate appearances, hits, RBIs, homers, and so on all aid in progressing a card toward its next level. It will take a ton of time to reach Level 5 with any one card, but if you’re one of the first people to reach that level, that’s a badge of honor you can rock all year. Put simply, these upgrades are bigger and better than Prestige cards in every way. Moreover, you can boost every single player card in the game by gaining the aforementioned Parallel XP. As an added bonus, if you sell the card, you’re only selling the card and not the progress. So if you re-buy a card later on, you can continue on that same Parallel XP path you were already going down. 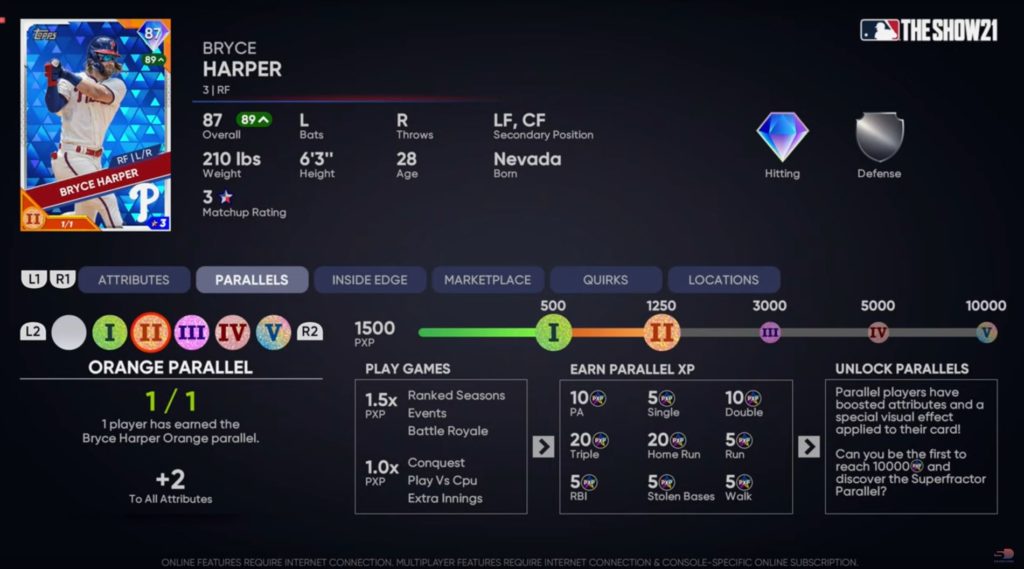 In terms of the more familiar ways to play Diamond Dynasty, it’s much of the same with significant improvements across the board. There are more than 150 legends spanning over 100 years of baseball in this year’s game, and quality of life changes are littered all over the place.

On top of that, Extra Innings is back so you can now rack up stats offline instead of needing to play online for most things. You can’t pick your matchup (so no spamming games against the Yetis), but this is a good thing to have back in the mode. You will still get a multiplier for certain things when playing online (which is only fair since it’s generally harder and you have less control) so this feels like a good outcome for everyone.

As usual, programs are the best way to earn rewards. You’ll earn XP from challenges and tasks to earn in-game and inning rewards. The three bosses will be returning, and you will choose from one once you hit 300 program stars. These bosses will once again be sellable on the market. 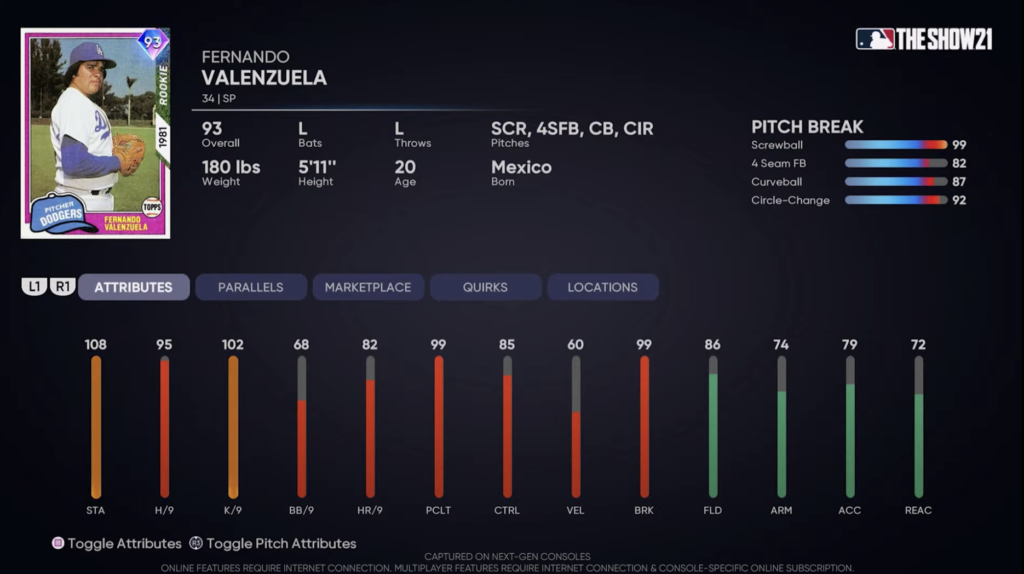 The 1st Inning bosses at release will be Fernando Valenzuela, Mike Piazza and Kenny Lofton. Piazza will be featured on a brand new card type, a “2nd Half Hero” card meant for individual half-season accolades. Lofton will be on a another new card type, a “Milestone” card. Lofton is featured in a White Sox uniform for this card as it was the team he was with when he achieved 500 career steals. Valenzuela will be a “Rookie” card, a returning series. 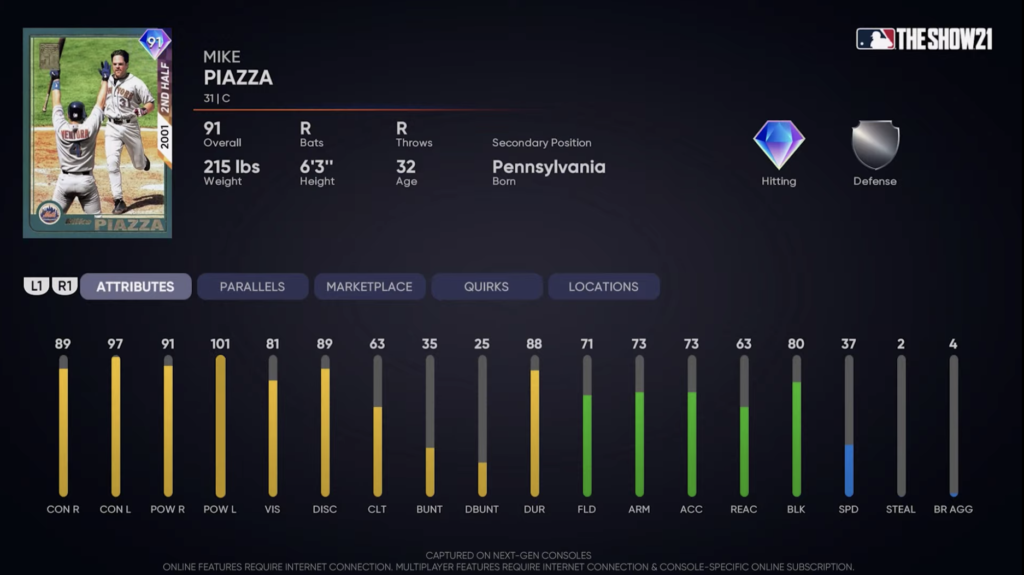 Each player offers something a little bit different. Anyone who has played MLB The Show since 2017 or so knows the headaches and cheesiness Lofton can provide. Piazza has been, and likely will still be, one of the most dominant catcher cards in the game. Valenzuela is new, but he has a wonky delivery from the left side and could be a rotation staple, at least early in this cycle. 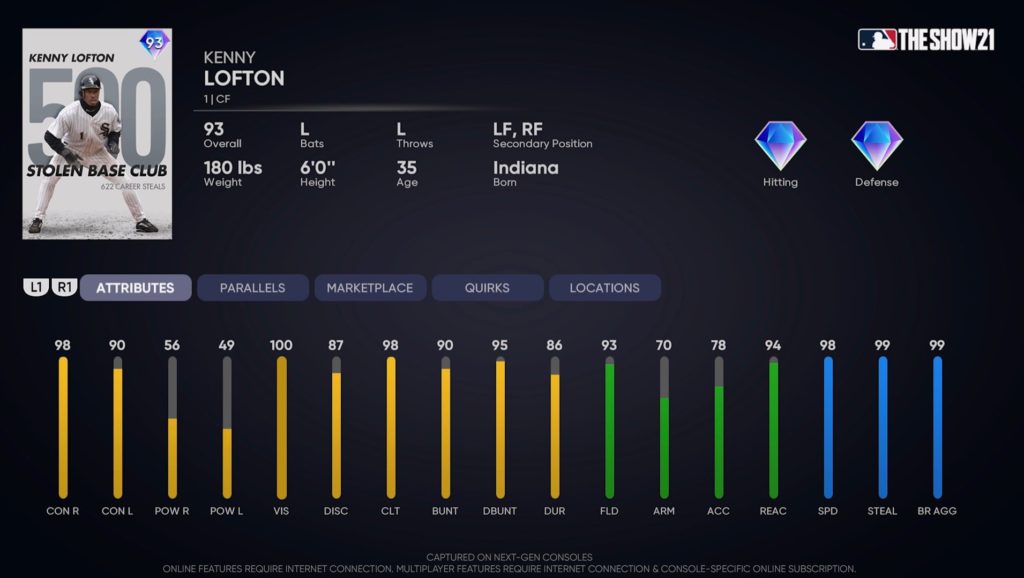 As usual, you can earn more players, stubs, packs, exclusive unlockables, bat skins, and some other inning features as well by playing the game and progressing through the inning program.

New this year, the XP reward path and inning programs have been consolidated into one mega reward path, so you’ll be earn even more rewards more often as you play the game each inning.

If we’re being greedy, 40 wins in one Ranked Seasons could still be tough. If the season only lasts roughly 30 days, that’s still over a win a day — and these are nine inning games unlike Events. Regardless, this is a wonderful step, and it’s a great way to still reward the elite players (who now get to double dip for rewards) but also reward those who play a ton overall. 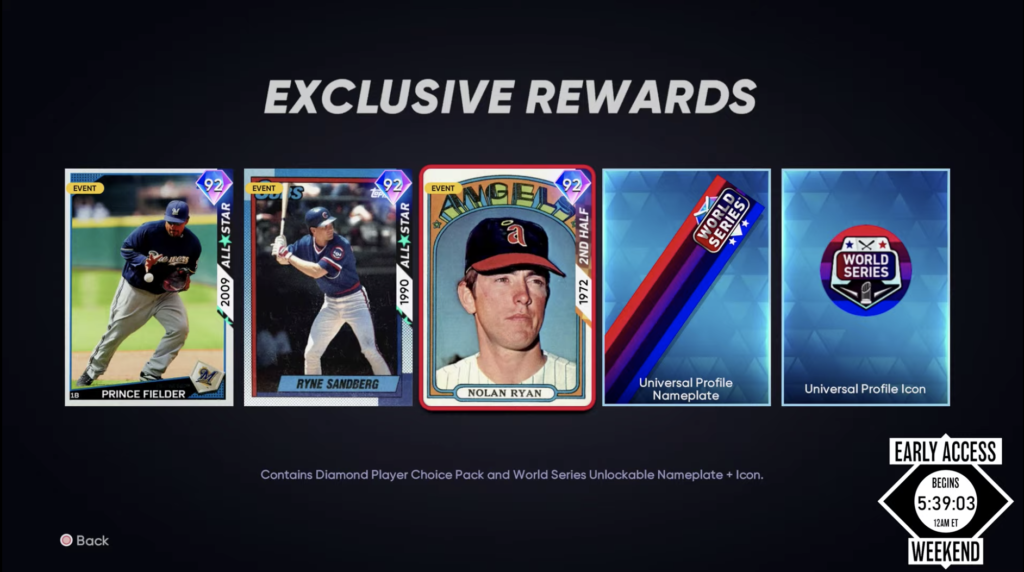 The biggest quality of life change coming to Ranked Seasons is games will now be played at the higher level difficulty between two opponents in different divisions. If you’re in All-Star games and your opponent is on Hall of Fame, the game will be played at Hall of Fame difficulty to help ensure consistency in difficulty for higher-end players. 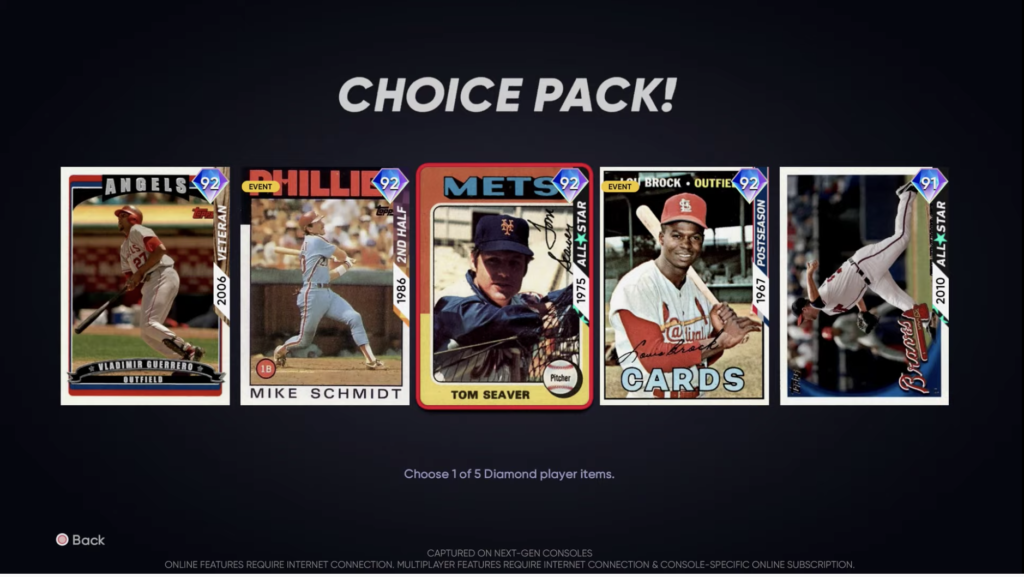 Much like Ranked Seasons, Battle Royale will now feature a program that will allow folks the ability to grab things from the 12-0 choice pack if they reach “50 points” in a program cycle. These points are accrued by winning games, going on streaks, finishing tasks, and challenges. Again, the idea is to be able to snag the best rewards from the game even if you’re not the most skilled, as long as you put in the time. Players will have to commit quite a bit of play time here as the Battle Royale program will be on a timer and those program cycles will likely last between three and five weeks. 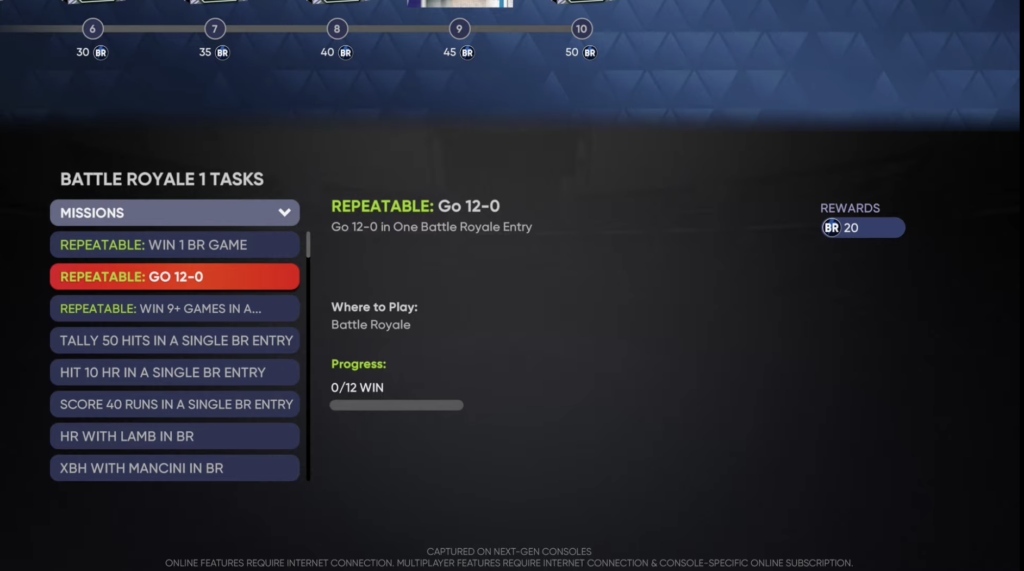 One big quality of life change coming to Battle Royale is players will now have the ability to view a player card inside the Battle Royale draft. This is sure to save folks from wondering what players have secondary positions they can mix and match with as they go through a draft. 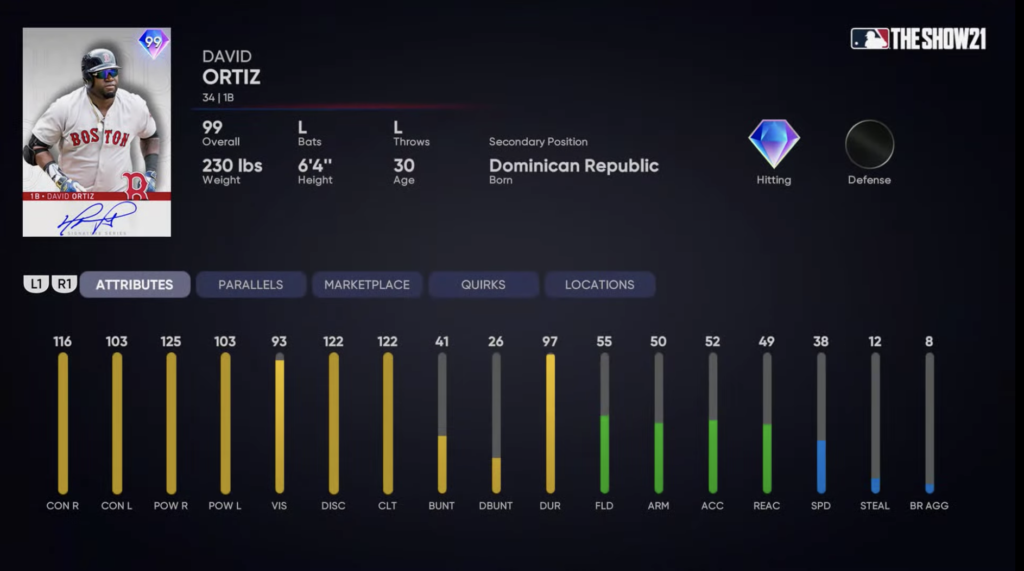 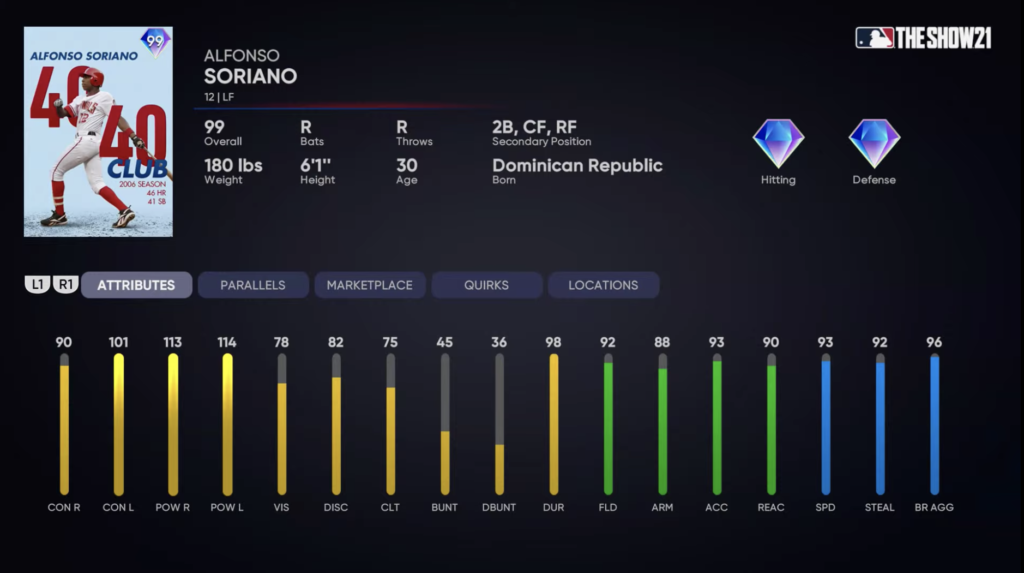 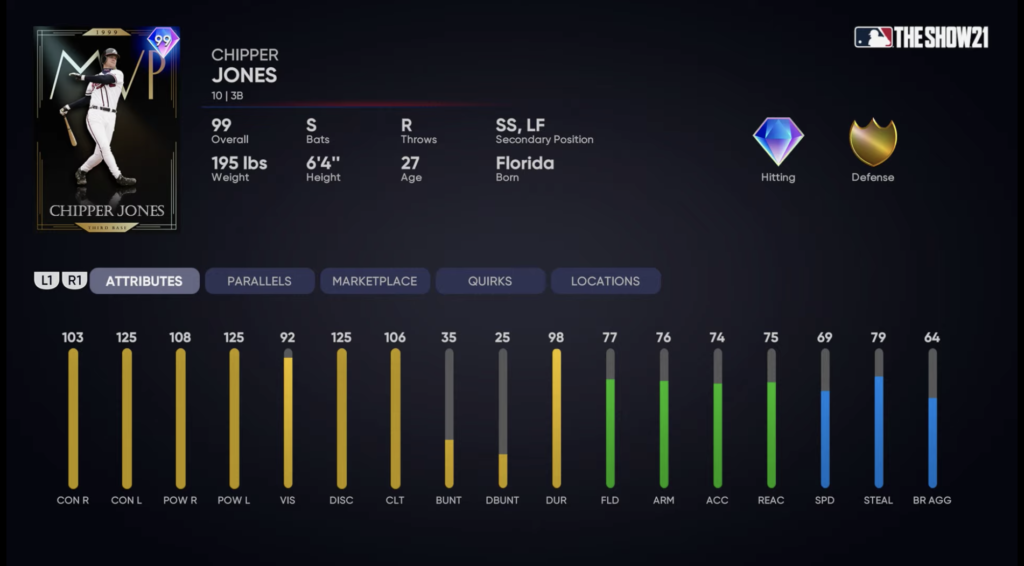 There will also be collection rewards for The 42 series, Milestone cards, 2nd Half Heroes, Prospects, Prime, Awards, Signature Series, Topps Now, Monthly Awards, Future Stars, as well as stadiums, uniforms, and on it goes. If you collect all 42 players from the The 42 Series, you will be rewarded with a 99 overall Jackie Robinson. Very fitting. 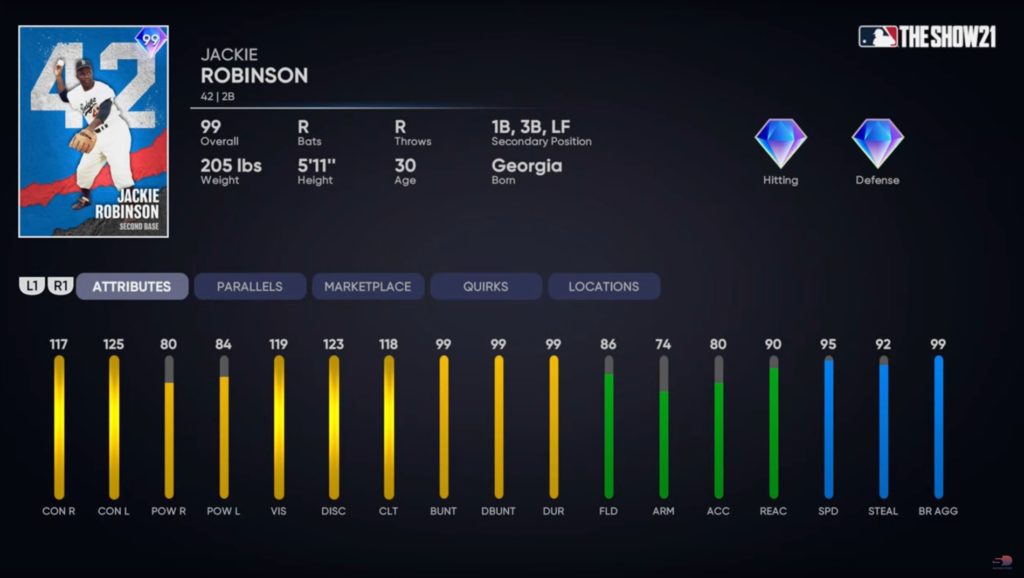 There will now be a Daily Moments program. If you finish all the moments necessary on any given day, you’ll earn the rewards for that day. This is another program that’ll give you access to Evolution cards, as well as specific progress inside those Evolution cards. The moments will also reward stubs, packs, and more. It’s not entirely clear how this program and/or moments will work, but I look forward to jumping into the mode to discover what’s possible on that front. At worst, it’s another great way to earn rewards by playing the game every day. 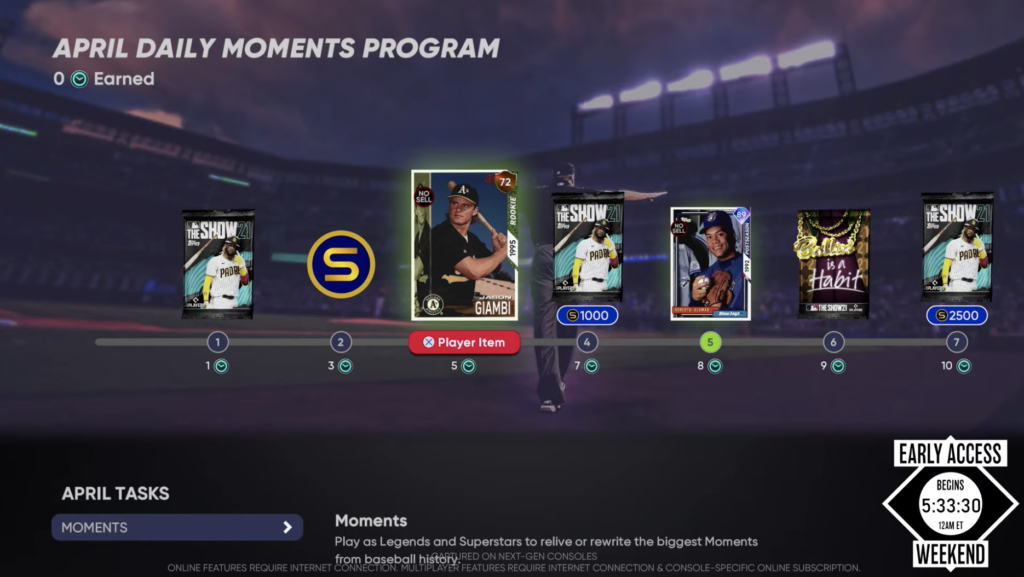 Team Affinity is back and will now be rewarded like a program, but this year will be division-based instead of by individual team. Finishing tasks, challenges, and stats achievements with players from a specific division will help you with progress inside that TA program. The rewards, like last year, will include various unlockables, including the newly added uniform options. That’s right, this year you can now simply wear MLB, retro or minor league uniforms if you’re not interested in creating your own.

There are no uniform exchanges, and you can’t mix and match, but it’s a big addition for those who want to look like their favorite real team. Lastly, you can’t sell the TA reward players (at least not the first stage). This is consistent with last year for the first stage, but we’ll see if that trend continues for future stages or they open the doors back up to selling TA players. 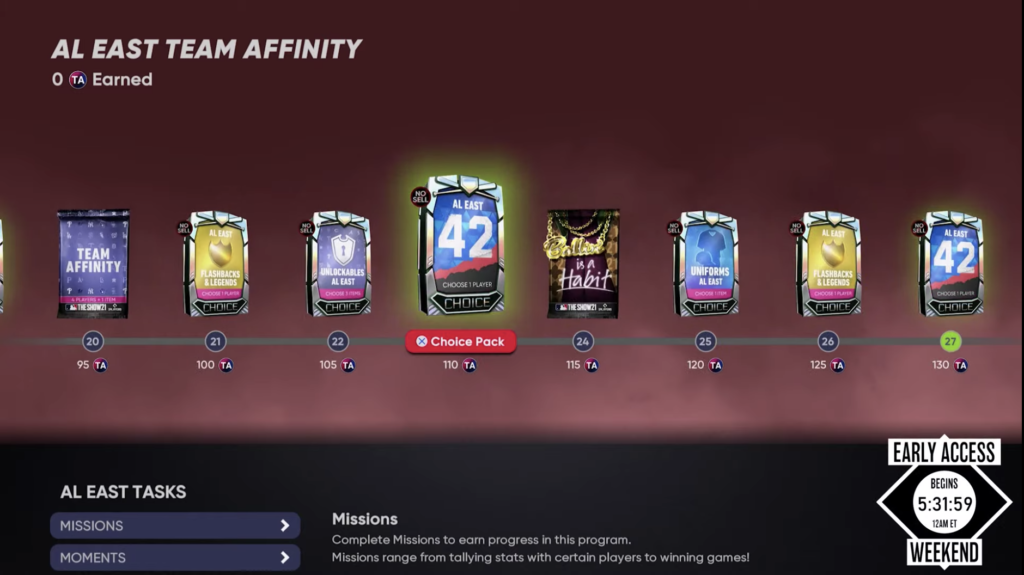 Prospect packs will be a big feature this year in Conquest. Every time you finish a division inside of the mode, you’ll be rewarded with a Prospect pack with a gold-level prospect inside. There will once again be a big Prospect collection reward for collecting every prospect card in the game. 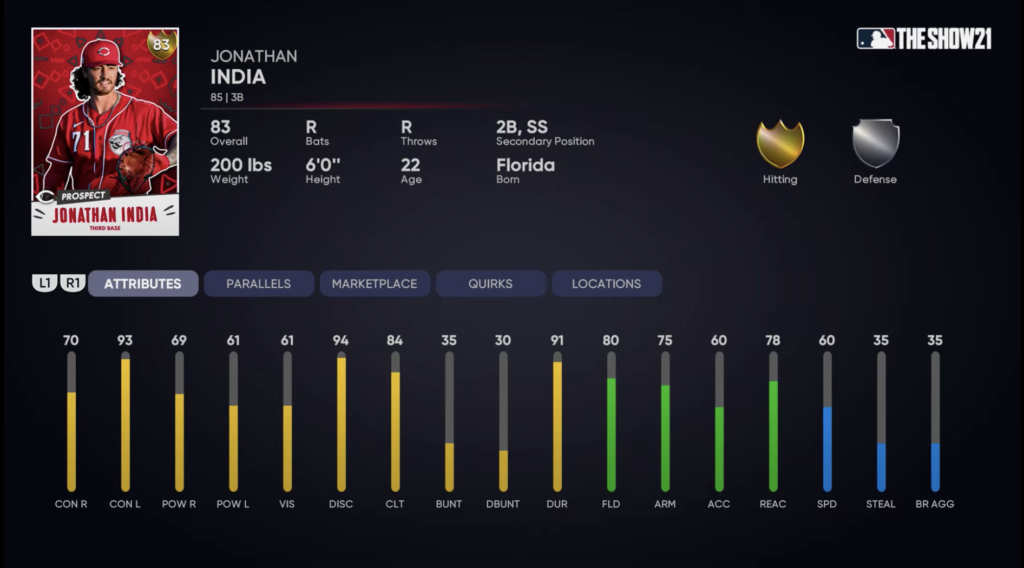 Everyone will be eligible to get a free diamond Roberto Clemente pack at launch. This will be available until Monday, so be sure to claim it in the packs section upon firing up the game. There will also be a new “Space 1” pack. This pack is a little like a Headliners pack, though it’s a choice pack and includes tons of different cards, including a Wander Franco prospect card, as well as the first Jasson Dominguez card of the year. When buying one of these packs, you’re also be provided access to your choice of one of three uniform options. 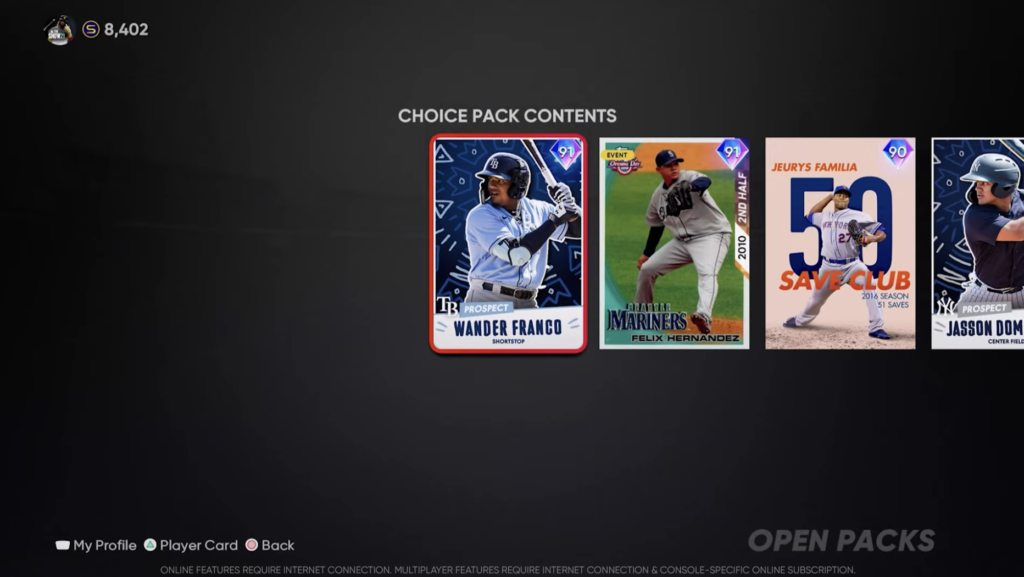 Headliners packs are back and Headliners 1 will be a 90 overall Josh Donaldson.

As far as cross-play goes, it works in just about every way you could imagine. The marketplace is cross-play. Parallel XP card progress is cross-play enabled if you play on multiple platforms as well. Stubs won’t carry over from platform to platform, but any cards you buy with stubs will carry over on your account. Be sure to link multiple accounts on TheShow.com if you’re planning to play on multiple consoles. The one hold up is if you’re playing in a created stadium on next-gen consoles, you cannot play with folks on Xbox One or PS4. 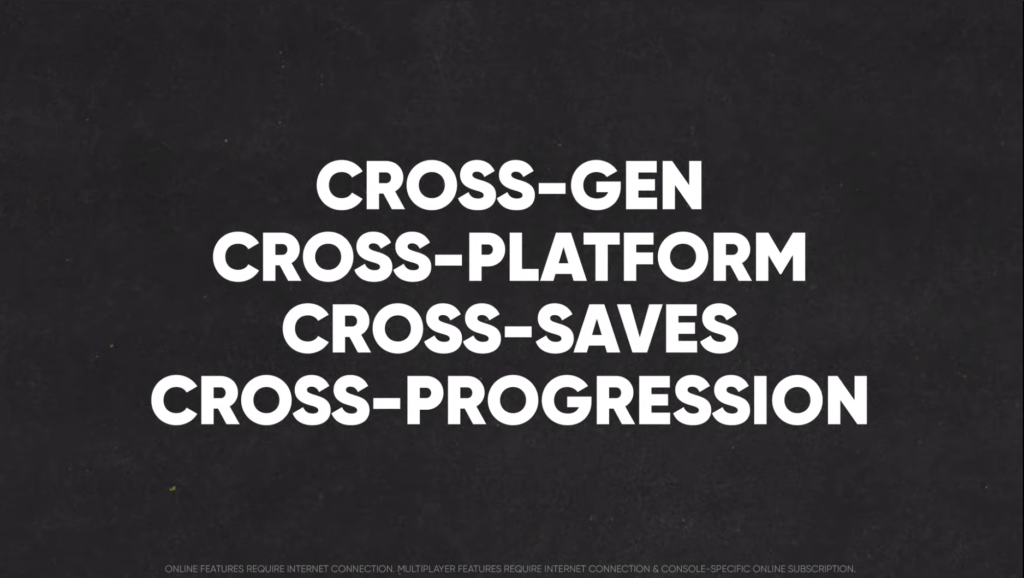 It’s shaping up to be a big year for MLB The Show 21 Diamond Dynasty. There’s more ways than ever to show off your card collections, as well as highlight your achievements and the rarity of specific cards you covet. This, coupled with the addition of Stadium Creator, should make for a fresh experience that lasts months and months.