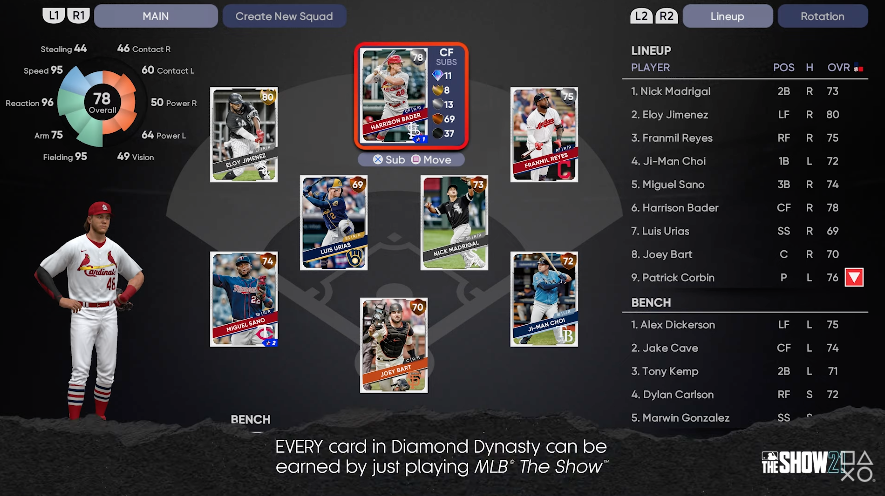 On Tuesday morning, San Diego Studio released a new video teasing Diamond Dynasty mode and how it will look in MLB The Show 21. The video itself didn’t contain too many new features or pieces of information on the game, but it did give us a new look at the user interface and design style.

Right away, viewers should notice the design team’s choice to once again follow the Topps card art style. It’s not exactly the same as the Topps Series 1 set from this year, but it has some similar characteristics. Time will tell if it’s tinkered with before launch. It’s a crispy design with an old school banner layover featuring the player’s name and minimalist flair. San Diego Studio and Topps have partnered on card art for a few years now, and that trend appears to be continuing this year.

Our 2021 collection officially releases today, and here is your chance to win a box!!!

To enter, comment below with your way-too-early season prediction of who is winning the 2021 World Series 👀

The most significant change to the actual game and how it plays may be how you earn progress toward programs. There now appears to be an SDS version of a “battle pass” to unlock things as you go. In effect, the Inning Programs already were a battle pass of sorts, but it now looks like a more pronounced structure. This would also fit in with the way NBA 2K modified MyTeam mode this year to go that route as well. It’s worked well in 2K, and we think it’s a a good aspect to steal from Fortnite and the other progenitors of the concept.

From here, the wording is a little less clear, but SDS may be hinting at two new changes to the progression system as well. Players may have the ability to work their way up the reward chain this season by playing strictly offline if they want — and presumably online as well. In theory, you could do this at times last year with certain programs, but usually it was easier to mix and match offline/online to get the stars for the major Inning Programs. Additionally, it seems the focus is now on a general XP bucket rather than specific tasks and gaining “stars” through specific missions.

In other words, it seems SDS is pulling back a bit from the idea of “inning stars” and going just to a more raw XP route. If the XP you gather is universal — which, again, SDS seems to be hinting at here a bit — then like with your Road to the Show character, any XP you earn in modes like franchise or RttS would apply to the current Diamond Dynasty program as well. We would assume there will still be missions and challenges that get you more XP than other tasks, but if this is another way to get people playing more modes in The Show, then it’s a good concept. After all, we know tons of people have scoped out March to October to snag extra goodies in Diamond Dynasty.

Again, not much new news in this teaser video, but it does check the box for SDS releasing a new video every Tuesday until March.

According to the original blog post from SDS, we can expect a new video every Tuesday and Thursday. However, we didn’t get one last Thursday (the franchise video). We’ll see if they give us one more teaser this week before we jump into the month of March. At that time, we’ll be getting more comprehensive feature videos form San Diego Studio every Thursday showcasing a different corner of MLB The Show 21.