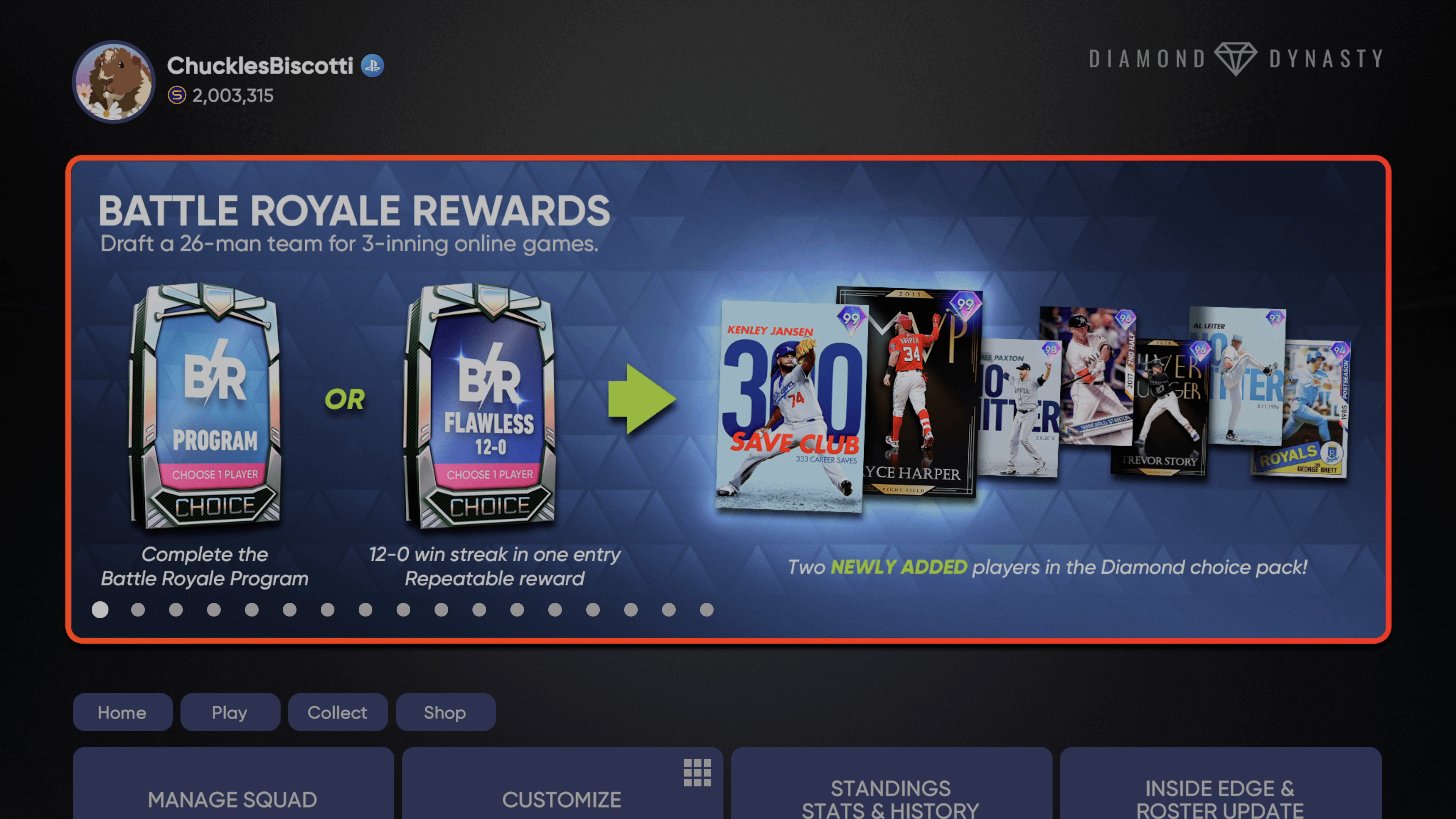 Battle Royale Season 5 pops off today in MLB The Show 21, and I got to say I’m real excited since some of my personal favorites are making it into the rewards this month. This starts with Awards Bryce Harper, a 99 overall with a swing that always clicks with me. The other 12-0 Flawless addition this month is Milestone Kenley Jansen. As I say every time now, BR rewards are the de-facto ones to chase these days as the programs are very fair, and even if you can’t ever go 12-0, you can absolutely get all the best rewards with some time and patience. However, I would say don’t keep re-drafting in hopes of getting players you need to accrue stats with for program points. It’s not consistent enough, so just play out your runs like normal.

As for the two new Flawless cards, Awards Bryce Harper has max power versus RHP, plus every other major hitting stats is over 105 minus the power vs LHP (91). He also has 72 vision, 125 discipline, 95 arm strength, and 74 speed. You can put him in any of the three outfield spots, but he will be best used as the strong-armed right fielder. He does not have catcher eligibility, so you can’t weasel him there like Monthly Awards Kyle Schwarber.

Milestone Kenley Jansen does have a sinker (SDS telling on itself once again by showing how meta sinkers are), and that sinker replaces his 2-seam fastball. He still leads with an elite cutter at 97+ mph, and then has a slider, changeup, and 4-seam fastball to go with the aforementioned sinker. He has 116 H/9, 125 K/9, and he has 99 control and break on his cutter. He also has 90+ control on the sinker and 4-seam. There may be some velocity issues here because there’s not a ton of variance between his pitches, but Jansen is way better than in the past in The Show this year, so that might be somewhat irrelevant. Either way, I’m taking Harper this month.

Let’s cover all the new silver, gold, and diamond players (there is a new Jorge Posada as well), plus let’s go over all the other new rewards you can snag along the way.

You can also acquire all these players in The Show marketplace.

Here are the BR Program Missions for Season 5 #MLBTheShow21 pic.twitter.com/4vgAFg09S4

It’s another good month to try and get through the Battle Royale Season 5 program. I also haven’t talked about Awards Jorge Posada yet, so let’s look at him real quick. Posada already has a legion of fans this year since his Yankees Collection Award card is very good. Here he has 99 power vs. RHP and 103 power vs. LHP. Plus, he has 119 discipline, 77 vision, 80 fielding, 80 arm, and 77 reaction. I do think there are catchers out there with better hitting and fielding stats, but Posada being a switch hitter with a great swing gives him some inherent boosts. I do think this card will slide into more lineups than you might think for these reasons. He has a secondary 1B defensive position as well, but I think he’ll obviously be best utilized behind the plate.

All in all, I once again think it’s worth chasing 100 BR points, even if you never have a shot to go 12-0. The amount of cards you can get here remains a tremendous value even if you can only win 2-3 games per run.