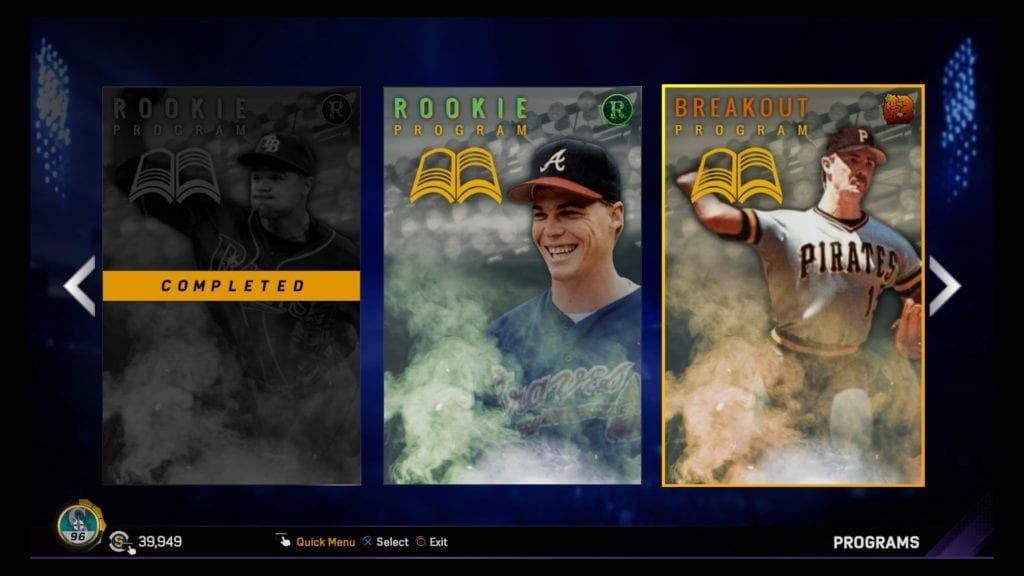 So far this season he Diamond Dynasty Community Market has been very up and down. Diverse Missions and a seemingly constant influx of new player cards have kept the market hyperactive right when it begins to stabilize. That being said, prices are not as volatile as previous weeks (beyond Breakout players being on the rise due to particular missions tied to them), but there are extreme bargains to uncover if the market is played just right.

Keep Track Of Gold Players On The Cusp Of Diamond Status

It seems elementary enough, but it has its own art form. Those who were able to buy Daniel Murphy for the roughly 8,500 he was selling for on Wednesday were handsomely rewarded when he jumped to Diamond on Friday. As seen earlier this season with Freddie Freeman, the jumps provide other-worldly Stub increases, yielding handsome payouts for those with the patience to wait it out (and the initial Stubs to buy Golds to begin with).

Sony San Diego does not reward every single player performing exceptionally well, so these upgrades come at a premium. However, a number of well-known studs are on the cusp of Diamond status. Player ratings are conservative, so targeting players with an 87-89 overall is a sound strategy. These ratings reflect consistent performance as opposed to lightning in a bottle.

Save Those Tickets Whenever Possible

Not unlike experiences found at Chuck E. Cheese and its many copycat establishments throughout the 1990s, being patient and saving up tickets could be incredibly beneficial instead of depleting them on cheaper prizes. The new Monthly Awards players rewarded those who had been saving their precious tickets. While many players cashed them in for any sort of incremental Rookie or Breakout roster boost, those who have been able to resist are sitting comfortably. Prices are reasonable, such as Gold Mitch Haniger at only 1,400 Tickets.

Stay Aggressive On The Basepaths

Throwing out baserunners remains a somewhat broken feature in online play, and multiple missions and programs emphasize stolen bases. The only way to feel better about having Evan Gattis steal second and third even on pitchouts is to steal some bases of your own, so stay active out there. There are some easy wins (such as the Chipper Jones 8 stolen bases with third basemen) that reward Tickets and Stubs without altering your strategy.

Do Not Ignore Events

In addition to providing unique lineups, Events have showcased different game lengths as well. For example, the 25-And-Under Event featured games of six innings. This allows for more stat accumulation than Conquest and goes by much faster than Ranked Seasons. Utilize this mode whenever it is active to keep the missions, Stubs and Tickets flowing.

Be Vigilant Of Friday Fire Sales

The market showcased its potentially extreme volatility on the Thursday and Friday leading into the Monthly Awards release. Usual Thursday inflation drove up some marquee players (such as Dallas Keuchel at over 11K Stubs), but the Friday fire sale brought excellent players to insane discounts and constant transactions. I spent 16K on two Anthony Rizzo cards, and as of Monday morning, they were already selling at 13,250 apiece. The around 4K net gained Stubs are tantalizing and already outweigh hours of instant flipping on the market, and that’s without whatever ratings increases are on the horizon. Keep this in mind when you stumble upon a bounty of Stubs.

The Doug Drabek Program is More Passive Than Other Programs

The Chipper Jones and Chris Archer programs provided players with a number of missions they could immediately pursue, such as conquering the Tampa Bay Rays territory in Conquest or acquiring Tropicana Field. However, the Doug Drabek Program is almost better left alone, as the slow-and-steady mission grinds can be completed without dramatically altering lineups or playing styles. Stash a Pirates reliever for Conquest games and make sure that you have at least one Breakout starter in your rotation, and you can knock these out during your normal playing habits — that is, if you enjoy Ranked Seasons.