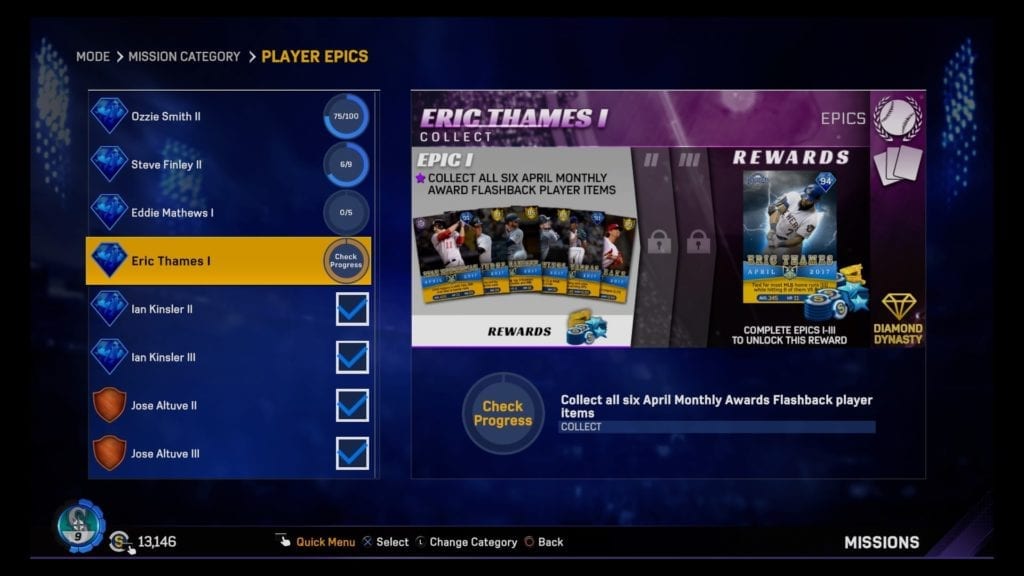 A limited edition, limited quantity Bases Loaded Pack was released today that coincides with a new Player Epic Mission for a Monthly Awards Eric Thames. The mission revolves around collecting all six Monthy Awards players (Jason Vargas, Ryan Zimmerman, Mike Leake, Aaron Judge, Chris Owings and Mitch Haniger). The pack costs 20K Stubs and is limited to one per person — it’s wise to realize only the Aaron Judge and Ryan Zimmerman will make the purchase worth your while. Otherwise, it’s best to just go and bite the bullet to buy each card on the Marketplace. The Mitch Haniger is the one card not in these packs, instead he costs 1,400 Tickets and you must be at least a Silver Level 50 to acquire the card.

There are also a bunch of other little additions to Diamond Dynasty. In the Ticket Counter, you will find a Breakout Orel Hershiser (2,300 Tickets, Gold Level 1) and a Breakout Dale Murphy (500 Tickets, Bronze Level 50). There are also a bunch of new Breakout cards that have been added to the mode overall. These are most likely to help you with the Doug Drabek Program, which revolves around using Breakout pitchers, as well as the Monthly Ranked Seasons Missions that partially revolve around doing particular things with Breakout/Flashback hitters. These players include Breakout Rich Gossage (90 overall), Breakout Jack McDowell (90), Breakout Chase Headley (94), Breakout Ian Kennedy (89), Breakout Steve Cishek (89), Breakout John Danks (85), Breakout Marco Estrada (85), Breakout Brad Boxberger (84), Breakout Logan Forsythe (83) and Breakout Didi Gregorius (82).

Some new Time Limited Missions were also added today. They all revolve around particular weekend matchups but don’t seem particularly worthwhile, with the rewards for each one just being a specific MLB stadium.

Finally, there was a roster update today, which led to some players fluctuating between card tiers. Here is the breakdown of the tier changes: