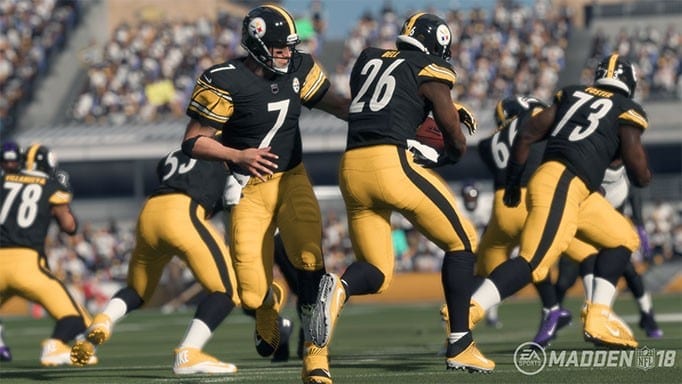 EA Sports released a new blog today discussing the retooling of how Madden handles blocking schemes in Madden NFL 18. There are a lot of juicy details in the blog, let’s break them down:

How’s it work? If you think the nickel is blitzing and the middle linebacker is dropping into coverage, open-up the pass protection adjustments menu in pre-play using LB/L1, and hit the A/X button to ID the Mike. Then move the M icon with the LS or the D-Pad to the nickel who is showing blitz and lock it in with another A/X press. You’ve now set your protection to account for the most dangerous threats on the line of scrimmage, plus the defender you believe is rushing. Note, this only works on passing plays, but can also be used on running plays to bluff your opponent.

This is a cool new addition that adds a layer of pre-snap strategy to the mix for sure. The thought of rushing to identify a potential blitzer as the play clock runs down sounds like a pretty incredible mind-game you’ll be put through.

This feature starts to activate when the average awareness score of the five offensive linemen reaches 80. The ability to recognize blitzes scales. An 80-rated O-line will be able recognize heat about five percent of the time, whereas an O-line averaging 97 or higher in awareness will recognize the pressure on almost every single pass play.

But there’s a catch. Any offensive lineman will tell you that the unit is only as good as it’s center. Thus, the Center’s awareness rating counts 2X relative to everybody else, and his rating will modify the total average up or down by replacing the AWR rating of the lowest rated lineman in the unit. If you want your O-line to play together and recognize those heaters in protection, you’re going to want to make sure you have that critical cog in the middle who can get his linemates on the same page.

Obviously this has gameplay implications, but let’s look beyond that to what it does to roster building. If the difference here is truly hugely noticeable, competition to sign smart OL (especially Centers) is going to be massive. This further emphasizes your need to really think through roster building even with your OL.

In the pass game, only edge rushers using a power move (PMV) or finesse move (FMV) with a rating of 90 or higher will have the ability for a “super win” when rushing on the edge, and the difference in those ratings compared to the blocker’s pass block rating (PBK) will determine the frequency of those wins.

In the run game, the match-up delta between the blocker and defender will determine both the speed at which a block shed can occur and the frequency. The tuning has been heavily weighted to favor elite players on both sides of the ball. However, the only time any outcome will be 100 percent is when a player has a 50-point advantage on either side. So there’s always a rare chance of an elite player getting beat on occasion.

This sounds good for sure — and allows you to really see some epic matchups on the line. Anything Madden can do to emphasize the war in the trenches (championships are still won here after all) is a good thing.

You can read more details on the official blog page.

What do you think of Madden NFL 18’s changes to the blocking game?