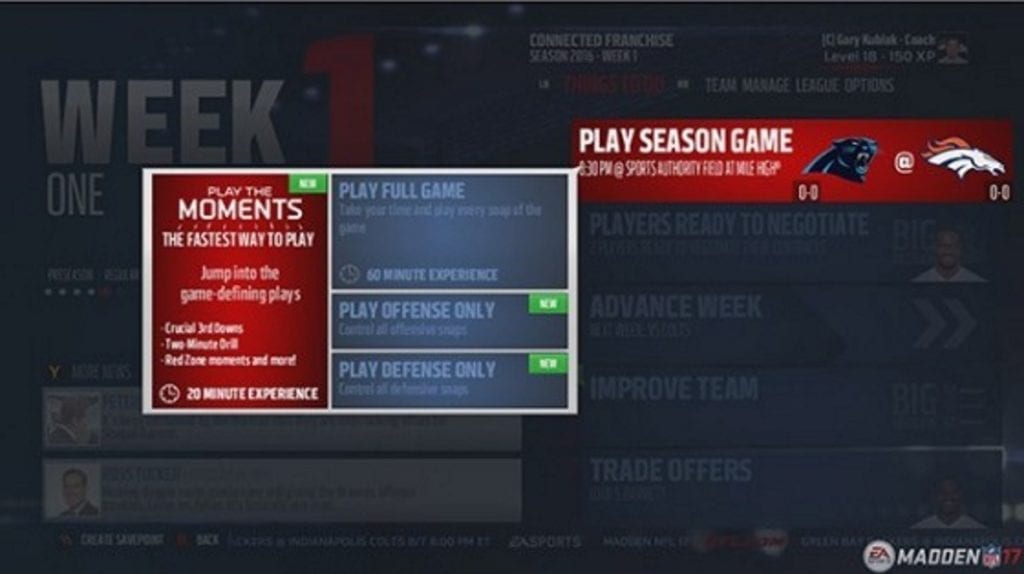 So you’ve been playing Madden 17 a lot and fancy yourself somewhat of an expert. Maybe you’ve won the Super Bowl a few times in your offline franchise, dominating the CPU every chance you get by exploiting and capitalizing on every one of its inherent flaws. Perhaps you’ve even won some games online against random strangers, oblivious to the fact that your opponents could very well be kids and/or football newbies just dipping their toe into the online realm of sports gaming. But are you ready for the ultimate challenge?

If so, it’s time to tackle the daunting world of online franchises and pit your skills against other dedicated Madden players. But where to begin? There are just so many franchises out there. How do you know which one is right for you? Well, here are some tips for finding a franchise that will keep you challenged and engaged for as many seasons as you want to devote.

There are a number of resources you can use to find online franchises that are seeking players, starting with the forums on this very site. Anyone familiar with Reddit knows that the Madden subreddit will typically have multiple posts a day from franchises looking to recruit members.

In my experience, it’s usually best to get your foot in the door of an already established franchise as there will likely be a core of reliable players in place that should ideally keep it from becoming a revolving door of new players coming and going.

An important thing to bear in mind is that not all franchises are created equal. There are franchises that insist on sim play by enforcing rules that will keep players from running the same money plays over and over, or going for it on fourth down no matter the distance or field position. In some cases, this will even be taken to the extreme of monitoring how many targets you give to various receivers to keep your offense equally distributed on a consistent basis.

It’s up to you to decide if you want a franchise like this that ensures a product that plays exactly like real football. If you’d prefer to not be constrained by any rules at all or if you’re more comfortable with something in between the two extremes, then obviously seek something out in another area. Just make sure you know what you’re getting into before jumping in.

As a member of an online franchise, you’ll be tasked with playing your games on a regular basis, so you’ll need to decide how much time you can allocate for this new commitment. For those who have a lot of other things going on, there are more casual online franchises that will only require you to play a game or two every week.

At the other end of the spectrum, if you don’t want to go a day without getting a game in, there are franchises that will be able to accommodate your insatiable appetite. Just try not to overextend yourself, as commissioners usually won’t tolerate someone who’s not keeping pace and won’t hesitate to boot you for not getting those games in.

Any online franchise is only going to be as good as the person in charge. What you want is someone who’s able to communicate with and mediate between the various personalities in the group while also making sure the franchise advances at a steady clip. Usually, the commish will deputize a few players within the franchise to help run the show and approve trades, but beware of anyone with any sort of responsibility who might seem volatile or hostile. It’s not uncommon to wake up one morning to find that someone with power has effectively destroyed the whole franchise all because of a blowout loss.

Are We Having Fun Yet?

Most franchises use the app GroupMe to facilitate conversation and part of the enjoyment should be participating in the group chat on a regular basis. If you’re in a good franchise, this will likely include sharing amusing pics, GIFs and life stories with like-minded and respectful individuals who just might become some of your best online friends over time. If you’re in a bad franchise, though, the chat will instead probably devolve into a nightmare of petty squabbles over games, regular use of racist or homophobic language, or simply a black hole of conversation where no one posts anything at all and everyone eventually goes their separate ways.