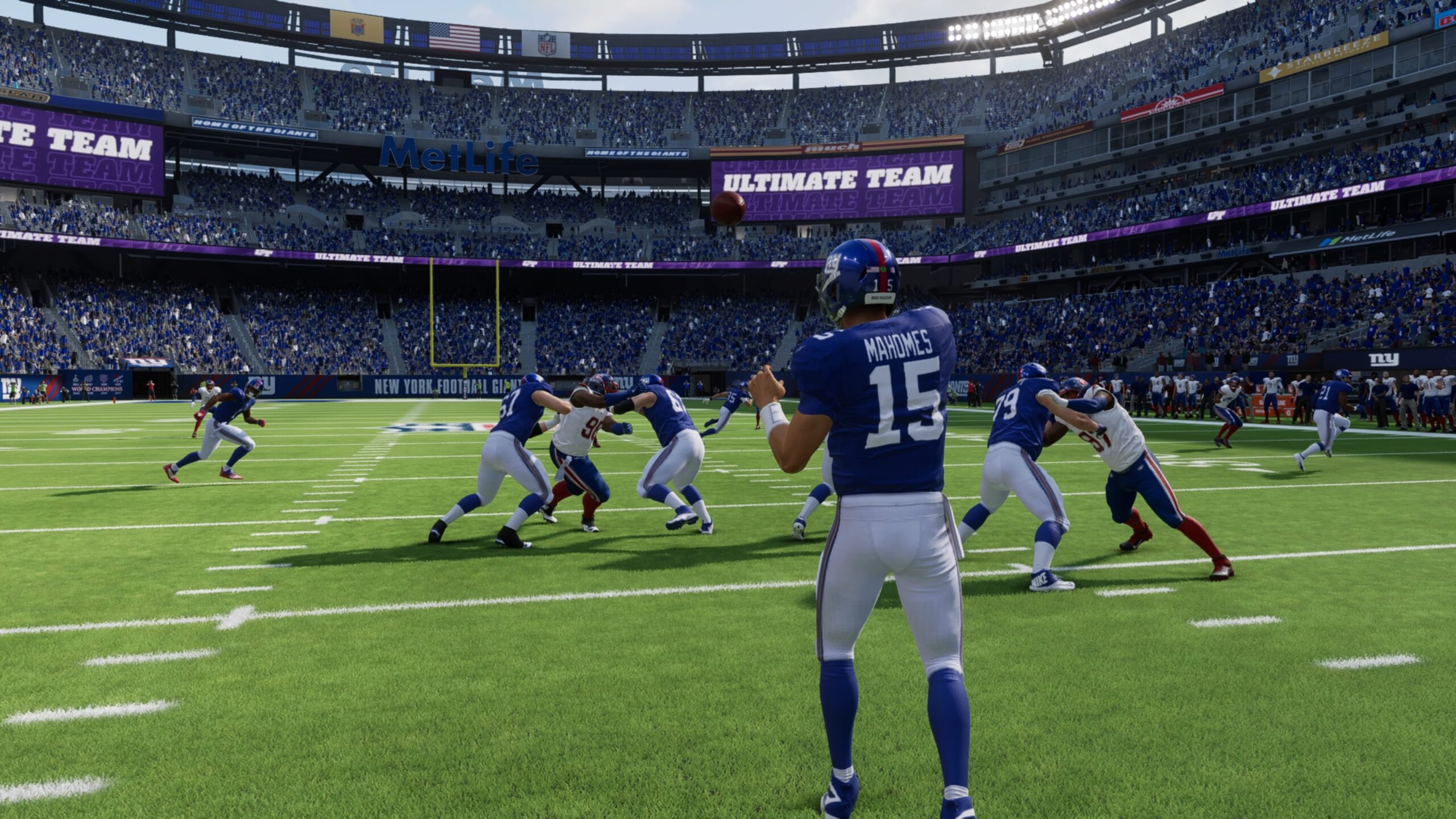 The release of Madden 22 has been accompanied by some of the usual favored activities by some of my brethren: online games where people insist on calling the same play over and over again, endless gripes about player ratings, likenesses and gameplay glitches, and of course that old card-collecting staple of a mode in Madden Ultimate Team. That’s right, fans of building their own unique squad can prepare for another season of grinding mindless solo challenges, figuring out the best way to upgrade player cards to their absolute peaks, and negotiating all sorts of new currencies within the mode to the point where you can hardly figure out what to do with any of them.

Though MUT continues to have aspects that are tedious, and the constant pressure to get you to spend real money to improve your team can’t help but eventually become annoying, there are definitely still ways to have fun within the mode and build a decent enough squad without needing to break out the credit card. Whether you prefer to play offline vs. the CPU or you prefer the competition of real humans, there are plenty of opportunities to use the team you’ve assembled to play some football. By doing this, you’ll then be able to complete all sorts of challenges and objectives that will see you rewarded with cards or even packs of cards that you can use to slowly but surely improve your squad.

Let’s go ahead and have a closer look at what’s new and noteworthy for Madden Ultimate Team in Madden 22 and outline some of the best ways to spend your time as you get started within the mode. 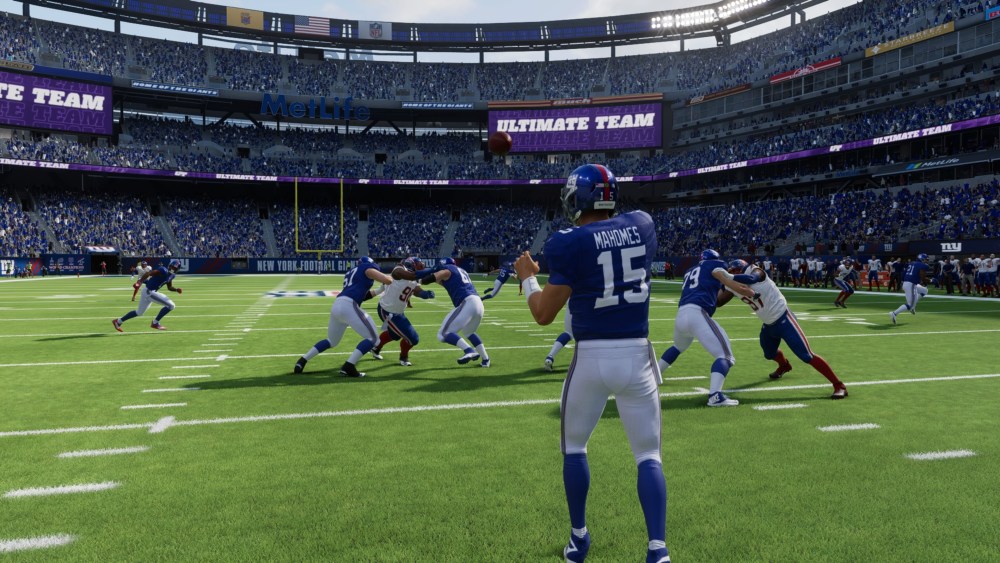 A Work In Progress

When I first started playing during the early trial access, MUT was still very much under construction and encouraging you to check back periodically as developers continued to add new content. Sure enough, over the course of the trial there was a whole new block of solo challenges added that could be played to earn more rewards and help bolster your team.

On the whole though, the more things change within MUT the more they stay the same. Between staples of MUT like Solo Challenges and Battles, Head to Head Online Seasons and multiplayer Squads, everything including even the menus look and function largely how they did in last year’s game. 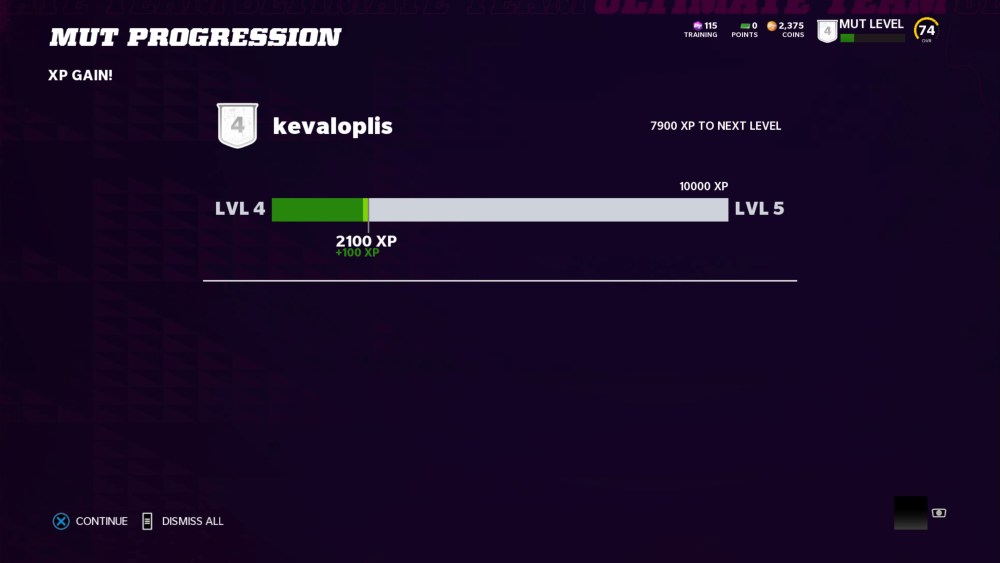 It might be fitting to refer to MUT as business because the lucrative mode continues to find different ways to make the grind for better cards and higher levels as excruciating as possible, thus ensuring that some people simply decide to shell out cash for better players rather than trying to earn them the old-fashioned way. See the tiny sliver of bright green in the picture above? That’s all that you’ll receive for completing many of the solos. You don’t even receive the same kind of extra XP for achievements on offense or defense that you did last year, and don’t expect any sort of detailed post-game breakdown of how you earned all of your XP in each game like you’d see in the past, likely because there just isn’t as much XP that can conceivably be earned.

You can still get rewards for completing various missions within MUT, whether through accumulating various stats or completing specific objectives, but even some of these have become more difficult to accomplish than they had been in the past. Take the mode’s Daily Objective. In the past, you only had to win a couple of games and then purchase some kind of pack from the store in order to receive a quick-sell coin reward card. This year they’ve added another hurdle to the Daily Objective by forcing you to not only win the two games and buy the pack, but you’ll also now have to get a first down 15 times to fulfill your Extended Daily in order to get 1,000 XP and that quick-sell coin card.

On the positive side of things, at least leveling up doesn’t include quite so many rewards that involve unlocking the opportunity to buy packs with real money as they have in the past. Once you unlock Level 5 rewards, for instance, you’ll have the chance to purchase an 80-82 Fantasy pack using 15,000 coins, although the Level 15 reward is two elite fantasy packs that you can only buy with real money. The pack rewards in the store seem to alternate every 10 levels between packs you can buy with coins and packs you’ll need real money to secure. 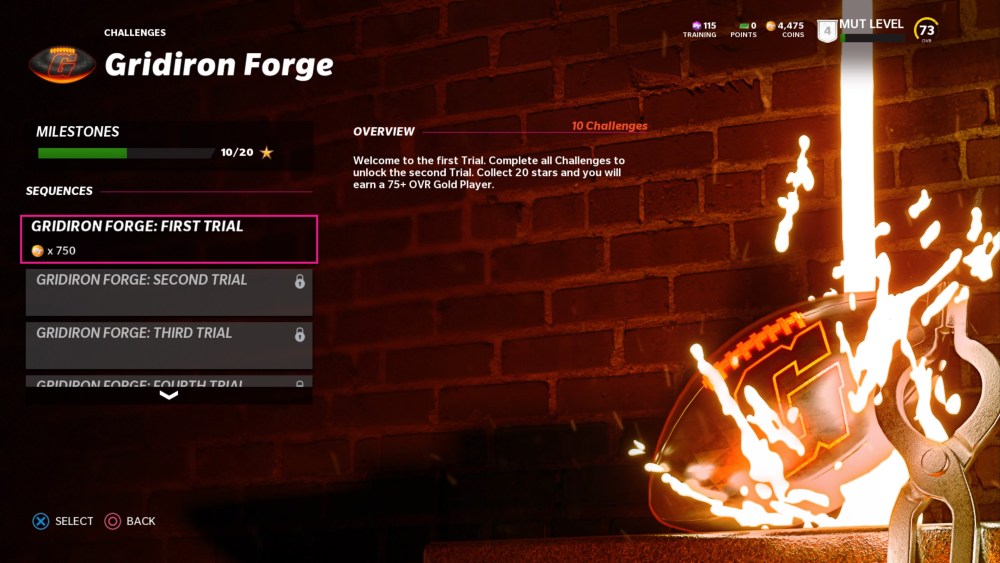 There still aren’t all that many solo challenges that have been added as of yet, but there are some decent rewards to be collected for completing the ones that are available now. The group of challenges labeled as “Early Access” (which are no longer available) had you playing as cover stars Tom Brady and Patrick Mahomes through an enjoyable set of scenarios from throughout their careers (can you lead Brady’s Super Bowl comeback versus the Falcons?) for the chance to bring home a Power Up version of either player and an 80-plus overall wide receiver to help out your quarterback.

Elsewhere, The Campaign group of solos is set up like a season of full 4-minute games where each one is preceded by several training challenges that are both easy to complete and also assist in teaching you some of the key components and controls of Madden 22. For your troubles, you will receive a bunch of training points and increasingly better cards as you slowly accumulate stars for completing each game.

A new addition to the challenge blocks is Gridiron Forge, and these ultimately probably give you the best rewards of the bunch, but they also present some of the longest and most difficult challenges. They start out relatively easy of course with simple objectives like rushing for 10 yards against a CPU opponent in arcade mode. However, they start to escalate as you make your way through them until you’re eventually having to gain 200-plus yards in a game and, to make matters worse, you’ll have to do it on the much more difficult simulation mode where you can’t just constantly use the hit stick to get the ball back by causing fumbles. 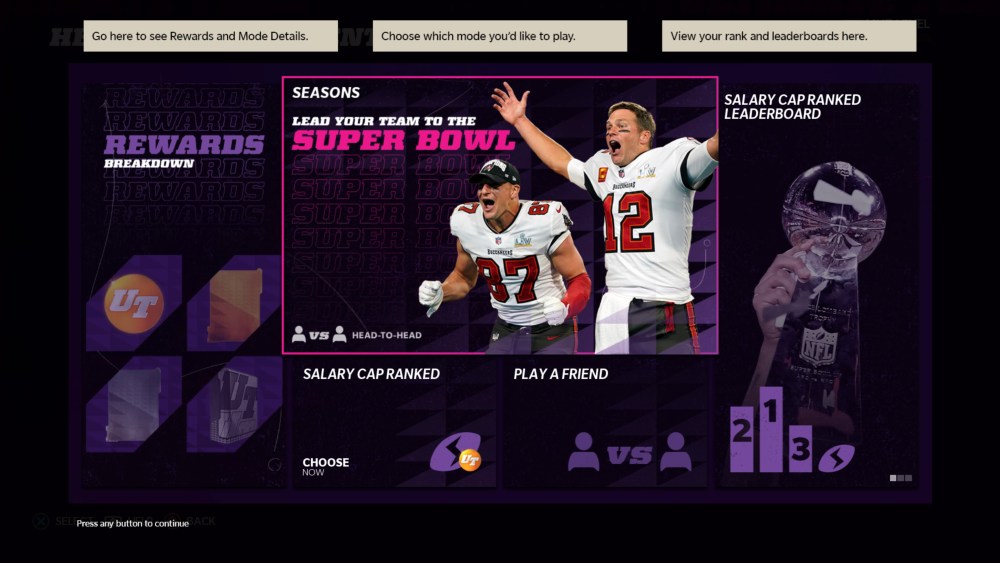 If you’re someone who would prefer to play against real people rather than the CPU, H2H Seasons will scratch that itch for you. It remains largely unchanged from its previous incarnations. You’ll attempt to string together a bunch of wins to get into the playoffs so that you can have a shot at bringing home better rewards by winning the Super Bowl. But if you lose four times during your season, it’s back to square one as you begin all over again.

You can also climb the different tiers within H2H Seasons by performing well, and you have the chance to unlock better rewards on higher tiers should you have some success. It’s a tried-and-true system that works quite well, though my initial experience with online play in Madden 22 has ended in a lot of frustrating disconnections, so here’s hoping that’s merely a server issue that needs to be worked out in these early days of release. 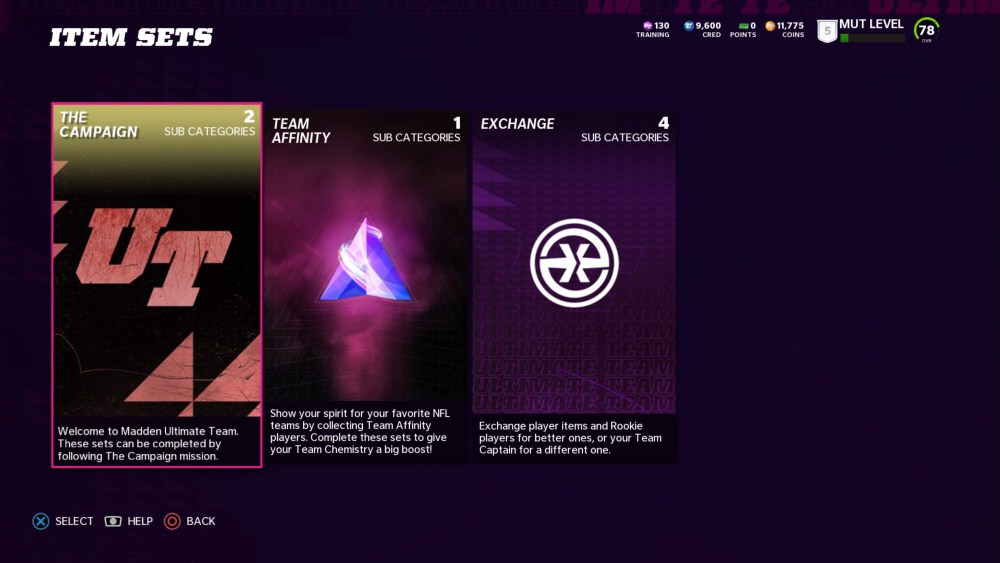 As you collect cards in MUT, you’ll inevitably end up with some that you no longer need to use in your lineup because you have better options elsewhere at your disposal, but that doesn’t mean that those cards need to go to waste. You can use them to complete Sets, which will provide you with rewards that will make it worth parting with those lesser players. This remains a system where you hopefully find some lucrative sets for trade-ins, and it’s one of the portions of MUT that can be simultaneously enjoyable and maddening all at once. 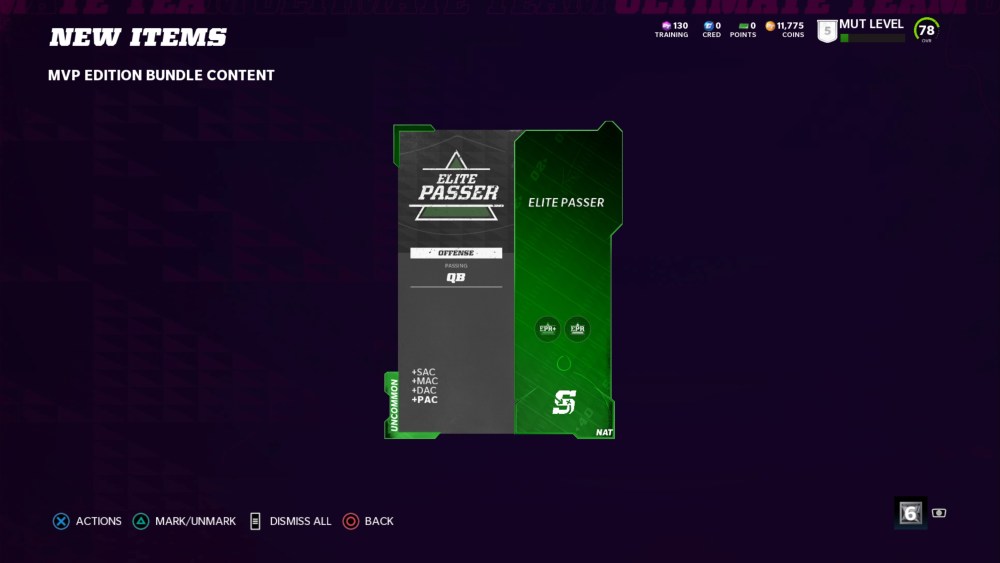 One of the more complicated aspects of MUT that can be difficult for newcomers or even veterans like myself to fully grasp is how to keep your players at the best level they can possibly be with any upgrades or boosts that are available. This starts with Training Points that you can use to boost the attributes of your Team Captain or Power Up Players, or you can even just apply them to add ability chemistries or X-Factors to players. You’ll also obtain Power Up Passes as rewards at various points, and these can be used to upgrade certain players in lieu of having to acquire their necessary player cards through other means.

These elements alone make it hard enough to determine the best way to use your training points and upgrade cards, but now there’s also been the introduction of strategy cards in MUT. You can use these to boost certain abilities for either specific players or your entire team. For instance, an Elite Passer strategy card will boost the accuracy of whoever is playing quarterback, while a Sure Tackler strategy card will boost attributes across your entire defense. Naturally, this is just one more element of your team that you can also upgrade, as you can apply training points to make these strategy cards even more effective.

This is how my team looked after I created it:

And this is how it looked after about 10 hours:

Without all that much in the way of new game modes or innovative team-building mechanics to speak of in this year’s MUT, it becomes easier to fixate on all its shortcomings and the ways that MUT is starting to become stale while remaining preoccupied with pushing you towards the kind of microtransactions that give these kinds of modes in sports games a bad reputation. You can bet that as time goes on after the game’s release, we will start to see the introduction of new types of currencies (as per usual) to make things even more confusing. And from there, it won’t be long before it will be all but impossible to keep pace with those willing to shell out the big bucks for the best cards out there.

It might be easier to accept the not-so-gentle push towards microtransactions as part of the landscape of these modes if it weren’t for the fact that MLB The Show 21 has already established how to do card collecting better in Diamond Dynasty by allowing you to compete with the best without even spending so much as a dime. Until EA makes an adjustment to allow MUT to be more accessible to everyone, it will remain a mode where it’s almost imperative to have deep pockets and be willing to reach into them regularly if you want to be able to keep up with the truly elite teams.