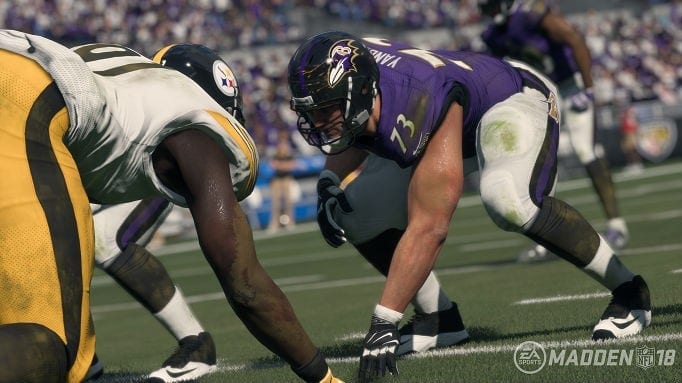 So far, it seems like Madden 18 has a little something for everyone. This is most evident in a recent blog post “Madden NFL 18 Game Styles” where three separate game modes (arcade, simulation and competitive) are described in detail.

For years, EA has done its best to find a happy medium between competitive and simulation styles. With competitive players looking for a more structured experience with less realistic randomness, the two play styles don’t really have a middle ground. Things like receivers having realistic drop rates and quarterbacks having more true-to-life accuracy have been an impossibility, as they aren’t conducive to fair and competitive play. Instead, fans of Madden have been left with an odd mishmash of the two styles.

Thankfully, that seems to have finally been put to bed. In the blog, EA promises that players can “expect the unexpected” under the simulation game style, with even the best of the best making an occasional slip up. Moreover, off-ball injuries and penalties look to play more of a role, with EA noting that they should occur at normal NFL rates. If this is actually the case (EA has promised realistic penalty rates before), this would cater to what simulation style players have been asking about for years. Assuming the various game styles are well implemented, it could lead to game-style specific animations and events like snaps in the dirt or over a punter’s head.

Conversely, competitive players should notice a nice balance between ratings playing a hefty role and random number generation (RNG) taking a back seat. If a receiver is open, he would be unlikely to drop the ball — especially if the receiver has a strong catch skill. This is obviously a big leap forward for competitive players, who have been having to battle RNG alongside the opposing player since the franchise’s inception.

Among some other recent announcements, Madden 18 had a blog post addressing some of the longest running community concerns. Perhaps the most notable point is that, as already mentioned, off-ball injuries will be implemented in this year’s title. Interestingly, offensive and defensive linemen are also in danger of being injured (simulation mode only), which will be sure to add depth to franchises.

Included in the blog post are some potentially game-changing points, including weight differential playing a role in the kind of tackles and big hits that can be made in game. EA notes that “you will see far less instances of smaller players successfully landing a hit stick on bigger ball carriers,” which promises a level of complexity that Madden hasn’t seen yet.

More importantly than anything else, the blog post details lower quarterback accuracy playing a major role in this year’s game. Particularly in simulation style, players will notice a wider gap between highly rated QBs and lower rated QBs. This could be a monumental change, as Madden has been plagued with QBs who feel the same for years. If the gap is significant, it may finally punish players who love to utilize scrambling QBs, as their poor accuracy was never really replicated in Madden. This isn’t the first time EA has promised a wider gap between QBs, but there’s good reason for optimism this time around. Included in the note about QB accuracy is a quick mention that “inaccurate passes have new placement modeling, ensuring you will see a wider variety in how throws are missed.” With poor throws almost always heading directly to the defense in the past, it will be interesting if we see more air-mailed and in-the-dirt throws than before.

With Madden 18 on the way later this month, it would appear that EA is really making a push to appease the wide variety of player bases that the franchise has. Such focus on community concerns is surely a step in the right direction for a franchise that has yet to hit an elite tier of sports simulation.