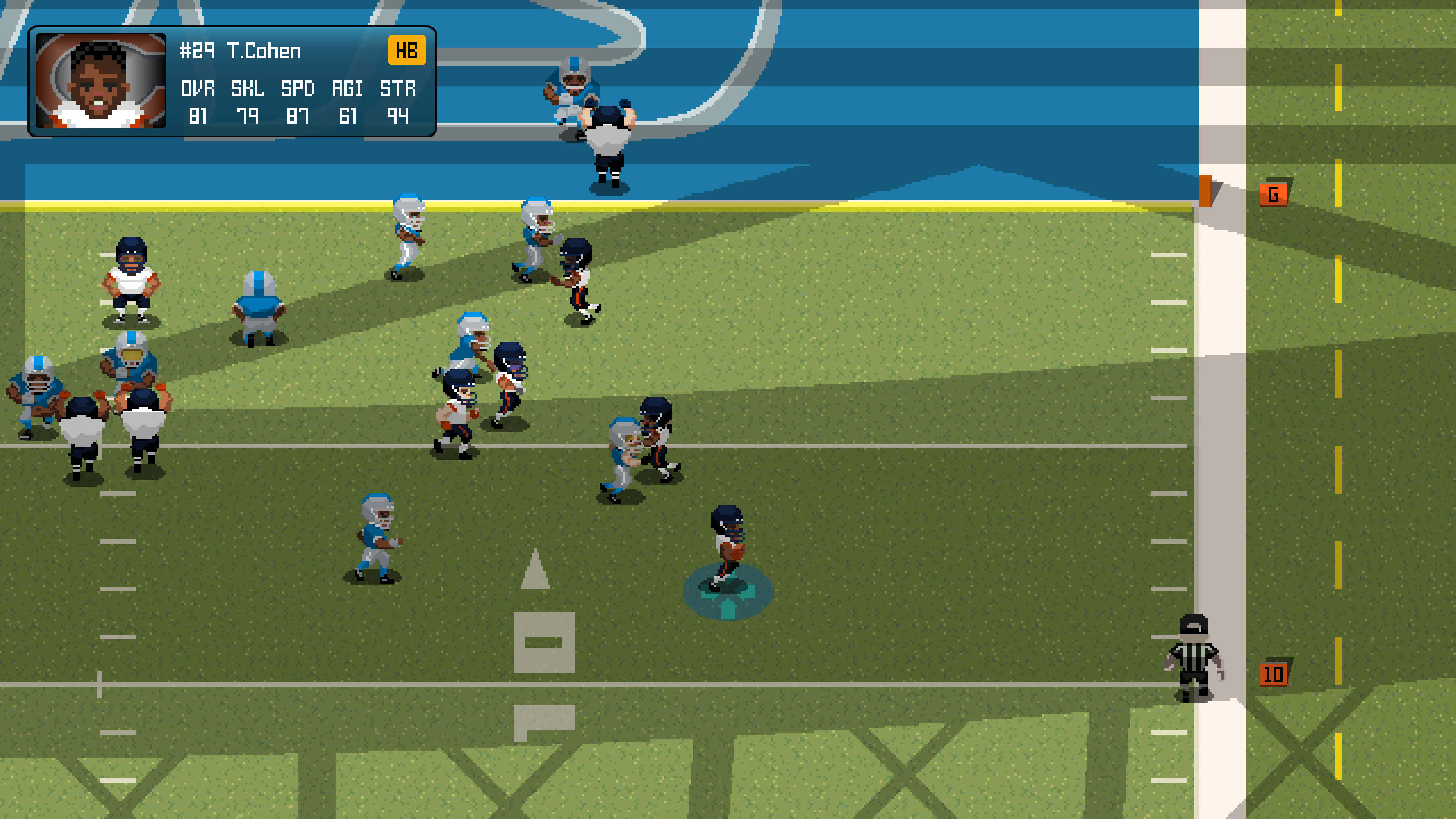 When you first fire up Legend Bowl, it wants to immediately take you back to the days of Tecmo Super Bowl and Joe Montana Sports Talk Football. Now I realize I most definitely am dating myself with those references, but in this case I am fine doing that. These classic titles from the past were of the arcade variety not because gaming fans wanted that over a true simulation, but because developers were limited in what they could design and offer.

Obviously, things have changed over the years and most sports video games fans want realism in terms of graphics, players, stadiums, and gameplay. What is so endearing about Legend Bowl is that it couples the look of the past with an extremely smart game of football under those wonderfully detailed pixelated little football buddies. The movement, the action, and the graphics all scream Nintendo and Sega, but the delivery and execution of the gameplay on the field coincide more with the expectations of today’s fan.

Each player is broken down into multiple categories in terms of skill, athleticism, and ability, and depending on who you are utilizing on the field, the differences can be felt on each play. You can see the difference in an offensive line that is talented, a fast or physical running back, or a wide receiver who is categorized as a possession or burner type of player. 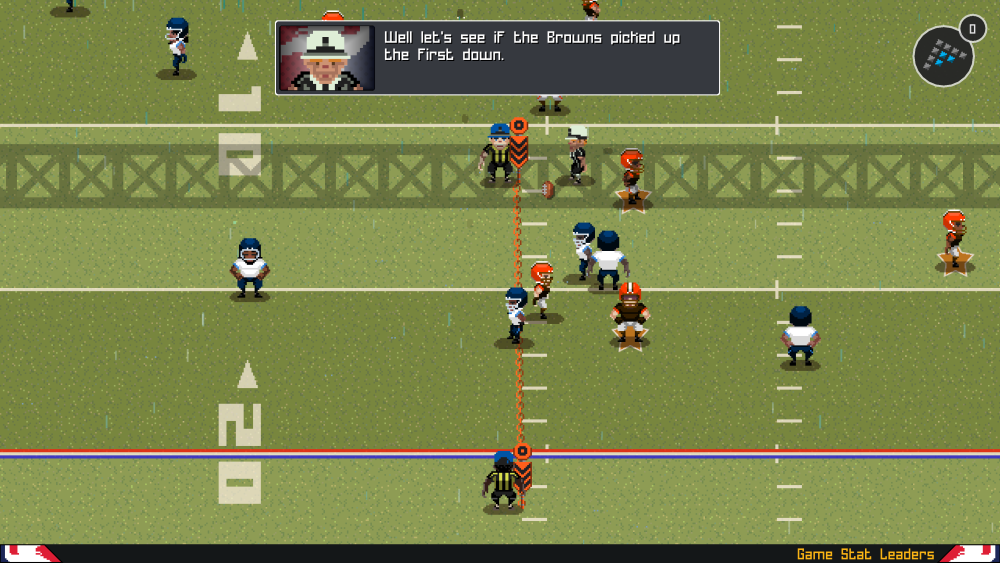 As I played through multiple exhibition matches, tournaments, and season mode, the game consistently proved that highly rated teams played that way. So if you were using a worse team than your opponent, smart decisions and a strong game plan were be required to have a chance at pulling out the win. 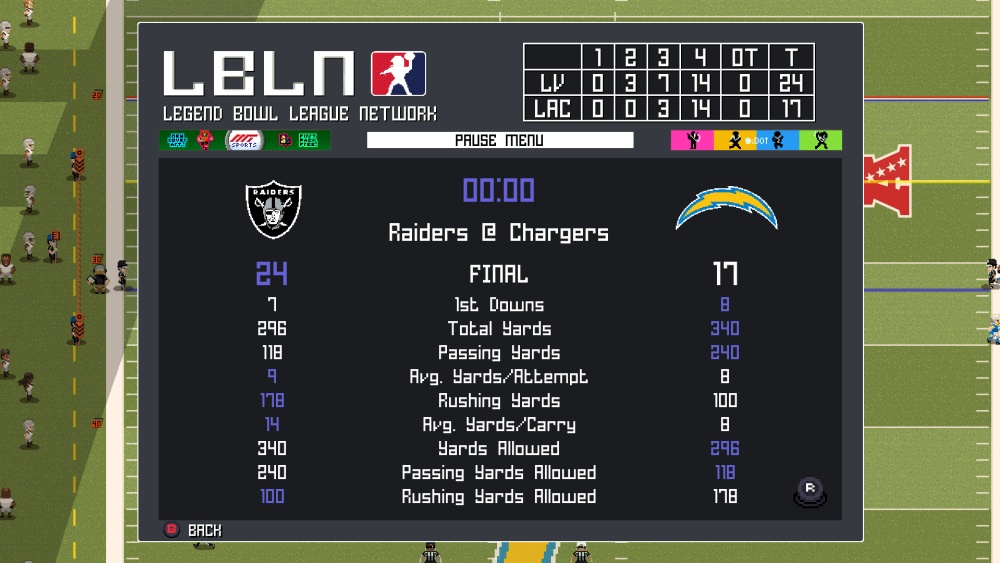 Examples of the gameplay feeling authentic range from bursting to the outside with a speedy back to watching errant throws from a quarterback who is poorly rated. Beyond that, secondary players understand area and play designations, and the offensive linemen have an actual game IQ by understanding assignment blocking.

The bottom line here is that if you remove the graphical fidelity disguised as a 1980s retro remake, Legend Bowl delivers an extremely solid experience on the field. It’s one that many simulation fans would enjoy as much, if not more, than any other title that is currently on the market today. Lastly, the control system that is designed in Legend Bowl accommodates a PlayStation, Xbox, or Nintendo controller, as well as a mouse and keyboard. And speaking of controls, the ones developed here are simple and intuitive all while providing a bevy of options such as audibles, timeouts, juke moves, hurdles, dives, and much more.

Most gamers are accustomed to having a franchise mode and that is understandable. Legend Bowl does not have a full franchise mode at this juncture, but it does include a season mode that can be crafted to duplicate that of a real NFL season.

During my experience, I chose to run a season mode with the NFL mod installed and the season crafted exactly how a real NFL season would play out. 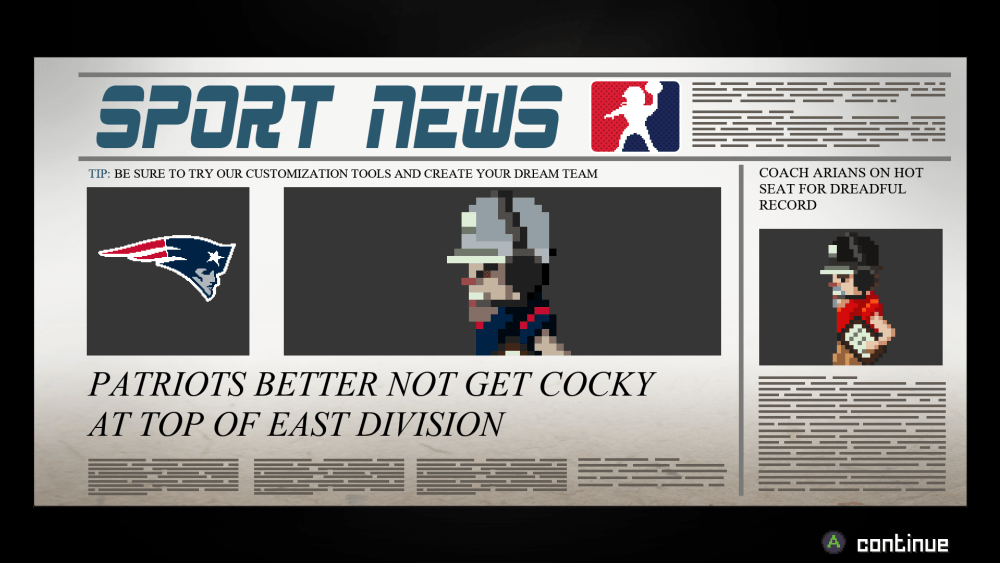 I spoke previously about my adoration for the gameplay in Legend Bowl, and that enjoyment is multiplied with the application of the NFL mod in season mode.

Playing with the real NFL players is a treat in Legend Bowl, and thanks to the wonderfully deep statistical options available in the game, season mode provides an extremely deep and enjoyable experience. It is an experience that I have replayed with multiple teams due to the quick-play nature of the title. Gameplay and NFL mod aside, the developer has delivered an amazing amount of aggregate statistical options that accumulate throughout the season and can be viewed easily with the click of a button. Lastly, you will notice that real injuries take place during season mode, and some of those injuries will be season ending, which forced me to utilize players on my depth chart in ways I wasn’t expecting. 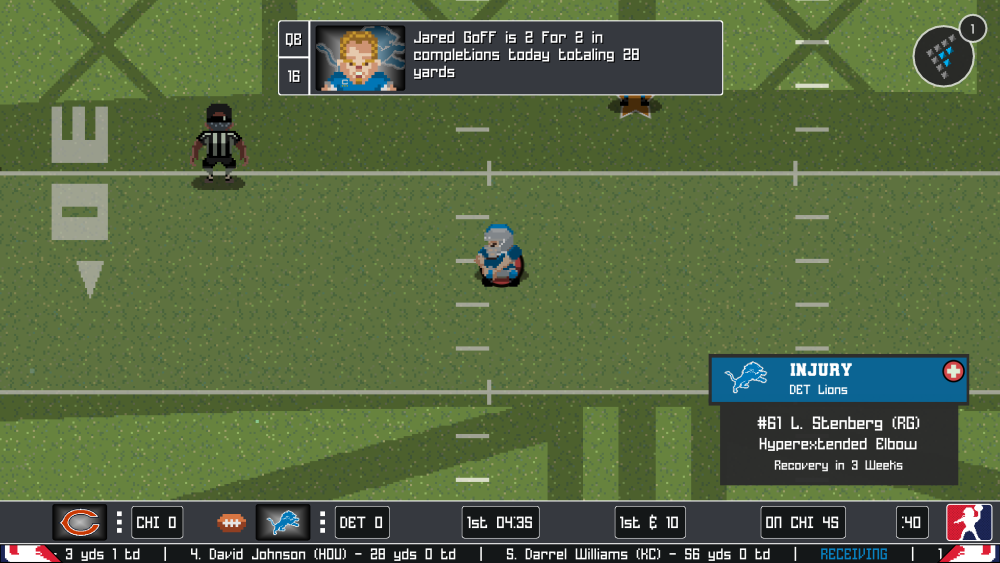 The deep statistical tracking and real-world injuries are just more examples of the detailed effort and vision the developer had from the start.

Legend Bowl offers up a fictitious world of football that can be played exactly as intended from the start. The city names and team colors may seem familiar to NFL fans, but that’s where the similarities end. However, thanks to a small modding group that can be found on the game’s Discord, multiple game mods are already available and more are being worked on as we speak.

I have played both the NFL and NCAA mod, and while I love both, the NFL mod fit my needs more because the game is designed to accommodate and replicate an exact NFL season. The modding group has done an amazing job of not only providing correct graphics, which include team logos, field art, and detailed uniforms, but have also included a roster set that comes very close to replicating that of the real NFL. Not only are the mods full of depth and detail, but they are extremely easy to install. For those who really need help, there is a simple “read me” install document that explains things very well. In no way should these mods be discounted as they add an incredible amount of replay factor to the title, and they allow users to play in multiple leagues in multiple eras at any time.

Last but not least, the number of options that are here to help create an accessible experience for fans of all abilities teeters on the edge of exhausting, but in a good way. From AI difficulty to gameplay options and time length to that of the kicking variety, Legend Bowl can be adjusted as often as you need it to. Legend Bowl also allows you to choose the type of surface you play on, so you can choose a baseball diamond. You can also select day or night, quarter length, injuries on or off, and QB Vision. There are even more options, but the point is that Legend Bowl is looking to accommodate whatever style you want in whatever era you want, and that is to be commended with such a small development group.

As far as games go, Legend Bowl is still in its infancy, and I get and respect that. A franchise mode and career mode are obvious additions that many people want, but the developer has been very clear about what Legend Bowl is for now. The idea is to make sure the foundation is solid before the ideas of a franchise mode with multiple years, trades, and drafts become a top priority. The inclusion one day of a franchise mode in Legend Bowl sounds fascinating, but as much as I want that, patience and understanding of where the title is right now are needed.

Other than no franchise mode, there are a few things that I wish could be changed. Occasionally, I will witness the AI running back get stuck and become indecisive behind the line, allowing for an easy “loss of yardage” type play. I also found myself wishing I could move my defensive player around pre-snap instead of being a static 8-bit character.

My other wish for this franchise moving forward is for the allowance of modded stadiums, or the inclusion of different styles of stadiums to help make mods even better.

The items that bug me in Legend Bowl are extremely limited at this point, and some of the options on my personal “wish list” require time as the development team is basically a single person who has delivered an amazing product through hours of dedication and effort.

If you have a Steam account, $20 to spend, and enjoy the game of football, Legend Bowl is an absolute must-buy in every sense. It offers a wide range of difficulty levels, a deep season mode, and you have the ability to create multiple years, eras, and leagues. Legend Bowl will not only fill a void for PC football fans, it will do so in a way that offers a lot of fun, authenticity, and options.