As I pressed the A button on that little rectangular control pad and watched my QB hand the ball off to the instant cheat code known as Bo Jackson, I knew 8-bit magic was about to take place. There were only four offensive plays for the original Tecmo Bowl, but I only needed one. While that may be nostalgia creeping in along with my longing for sports games that are simply fun to play, there is a small part of me that misses that mindset quite a bit, which leads right in to this Legend Bowl early access Review.

Sure, the hyper-realistic sports sims of today offer something a kid of the ’80s and ’90s could have never imagined, but they often miss the mark when it comes to just being fun to play. Thankfully, there are few titles available today that help scratch that proverbial itch, with one of them being Legend Bowl. A retro-type throwback football title that offers a simple game design while trying to offer a much deeper experience than any sports title from the 8-bit or 16-bit era could have.

For now, the game is in early access and only offered on Steam, but the developer has sights set on a console release at some point — and possibly even a mobile release — but that remains just hope for now. So even in early access, I wanted to see if Legend Bowl was a worthy purchase or was stuck in the “wait and see” category.

Just because the game has an extreme retro feel to it does not mean that it is bound by those limitations of past hardware. Playing Legend Bowl on PC with a controller is, simply put, a lot of fun. The amount of control the game delivers through the controller is quite impressive at this stage of development. 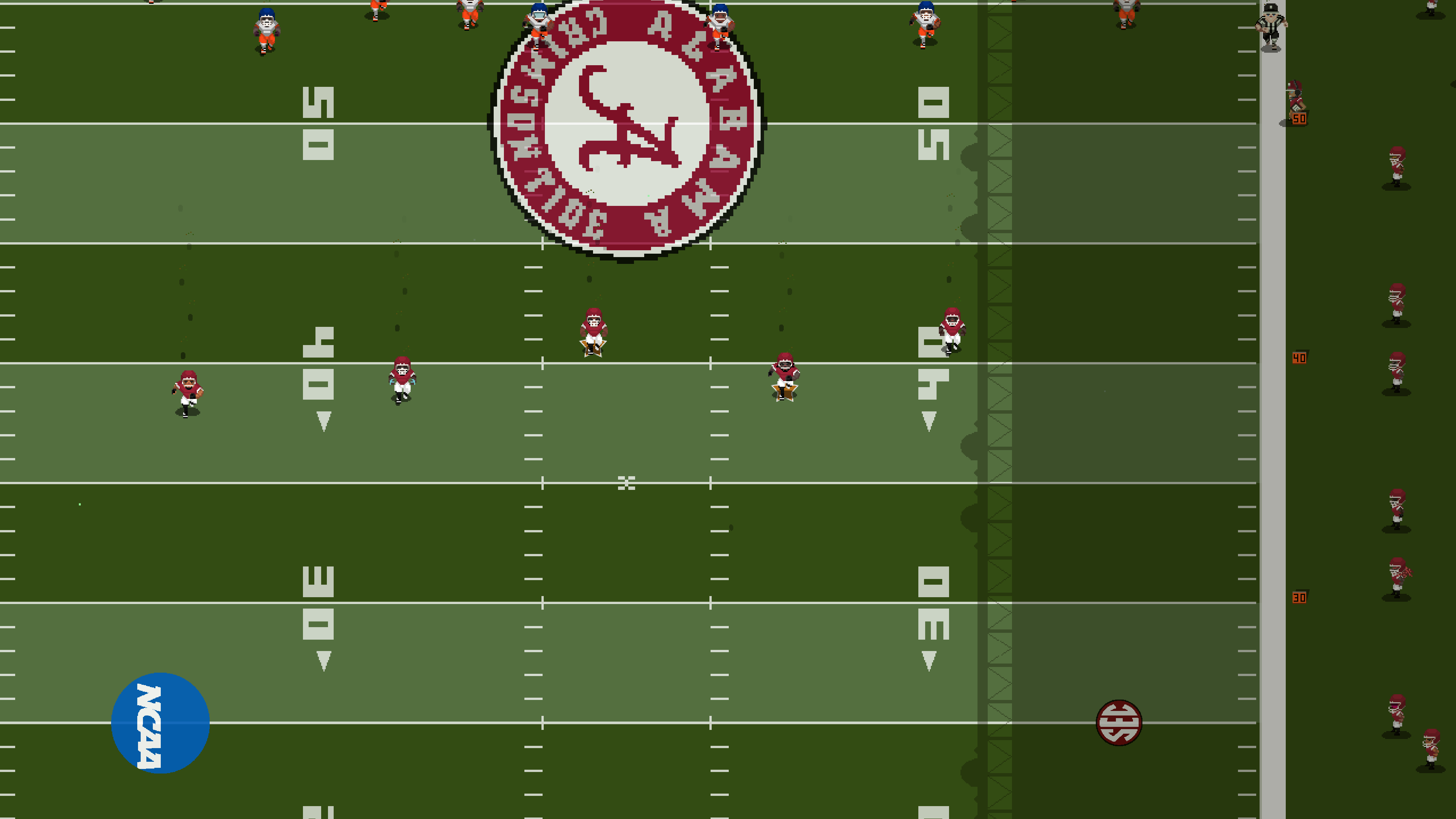 While running the ball, I had the ability to use my weight and momentum to make quick cuts. And with the most recent update, the game now gives the user the ability to cut sharp left or right using the juke option or perform a simple spin move. This may not seem like a huge deal, but it helps the run game from becoming too one dimensional.

The running game isn’t the only facet of the offense that goes beyond superficial inclusions. As QB, I had the ability to throw the ball with varying degrees of strength behind it, and the in-game power meter includes a built-in accuracy meter. When blended, these two elements help determine the quality of your pass. 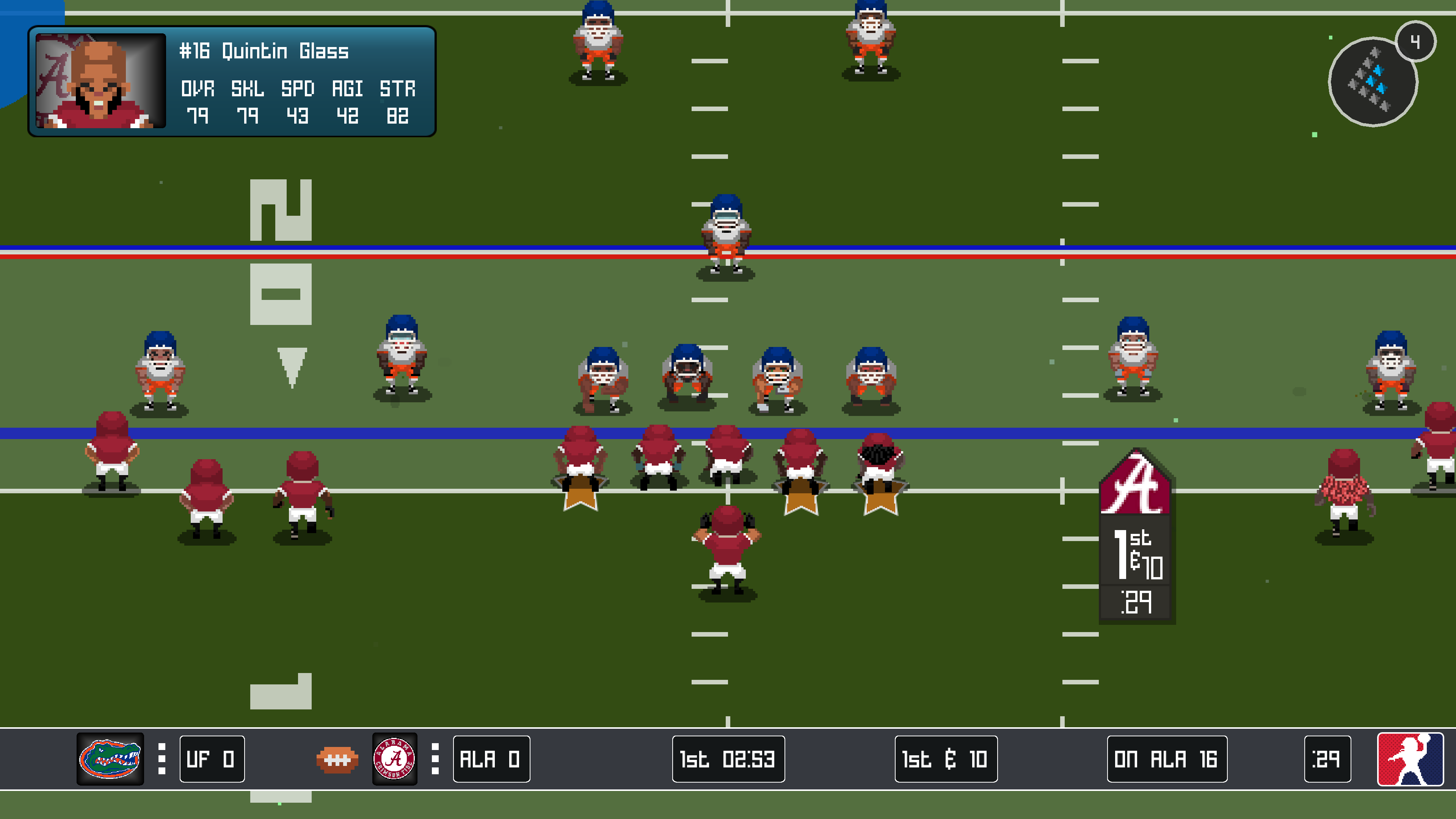 Not only does the game factor in how well the user is controlling the action on the field, but Legend Bowl also utilizes player attributes to help determine the outcome of a play. If your running back is slow and cumbersome, he will be less likely to break one up the middle or around the edge. If your QB lacks accuracy, connecting on a deep throw becomes a bit more complicated.

The point being is that while Legend Bowl is a throwback title, the gameplay is intuitive and incorporates multiple forms of data when the outcome of a play is being determined.

As a PC gamer, one of the perks is the ability to mod many of the games that we play, and this includes Legend Bowl. While the game is still in early access on Steam, that has not stopped the creative forces of the community from creating mods for Legend Bowl. As of the writing of this review, there are two prominent mods available for the game right now: one being the NFL mod and one being the NCAA mod. Now, both are still in their early stages, but they both add a ton to the game.

Included in each mod is, of course, team uniforms, helmets, colors, fields, logos and rosters. The modding teams have also been hard at work creating the real NFL schedule and a real 12-game schedule for the NCAA mod. The one caveat to modding a title in early access is with each new upgrade or addition to the game, there is a small chance that each mod has to be updated and adjusted also to fit the current status of the game. Still, though, it is an amazing treat for PC gamers to have all the NFL teams and many of the NCAA teams.

At this early stage, there are other mods that are in the works, but I’ll refrain from naming what they are. Regardless, know that the mods and the creative teams behind them are really bound by nothing, as the developer of Legend Bowl has embraced the idea and promotes new additions as they drop. Lastly, in no way does this suggest that the only way to enjoy Legend Bowl is by applying mods to the game. The title plays and runs just as well in its natural state.

With a title like Legend Bowl, little details built into the game help differentiate it from other non-licensed IPs, and there are plenty of them here. Small details like helmets flying off, or blood splatter after a big hit, or the chain gang rumbling out to measure for a first down are sprinkled all over the place. With some of the more recent updates Legend Bowl now includes the ability for the defense to tip passes and swat at pass attempts to knock them down. Legend Bowl also offers up a very intuitive kicking style that helps bring a sense of involvement and accomplishment, which is a breath of fresh air when it comes to special teams play. 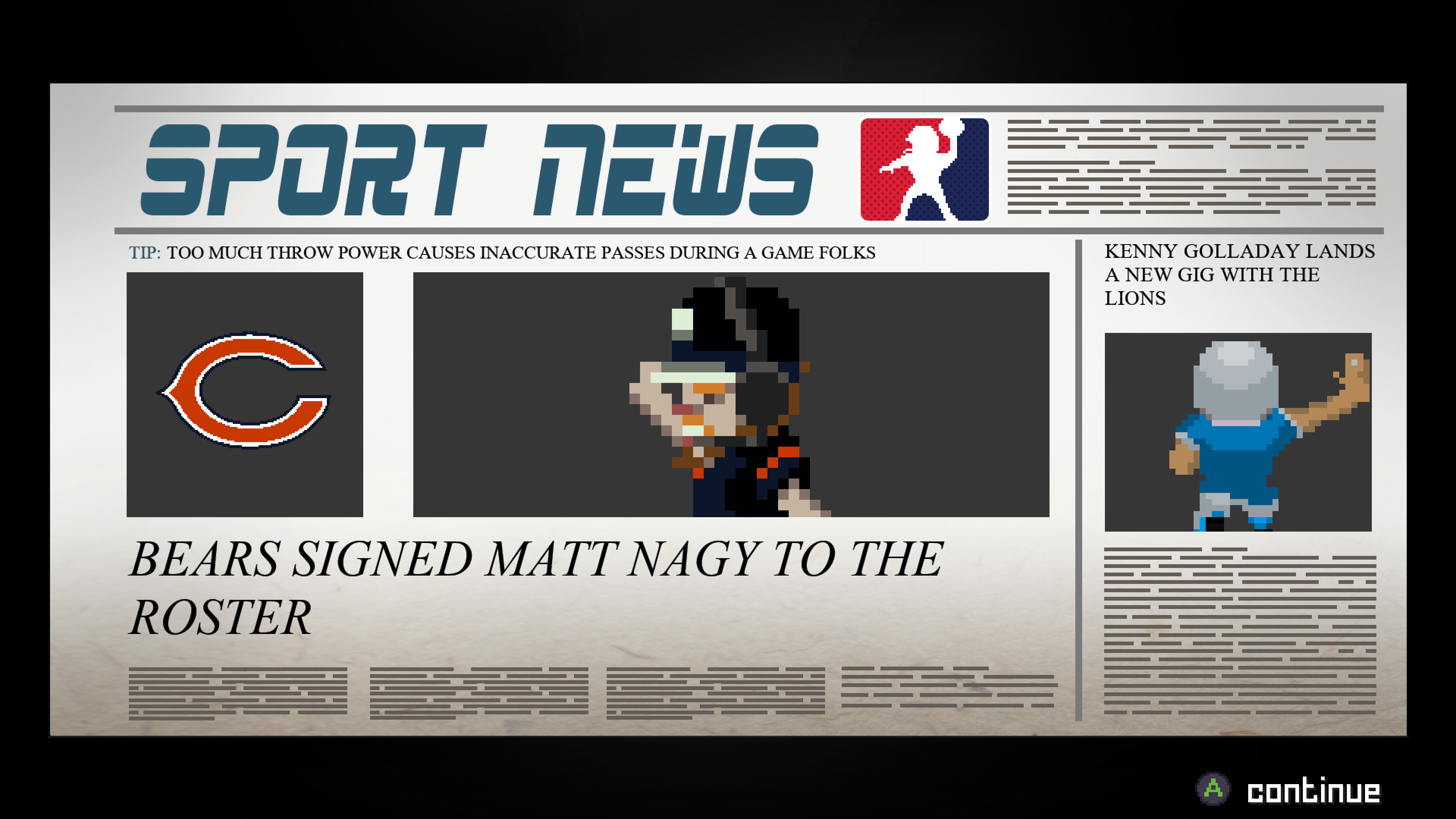 Listen, there isn’t much I do not like about Legend Bowl, even in the early access stage, but one thing that does make the list is the overly zoomed-in camera view during gameplay. Now, there are a couple things I can tweak before a game starts to help mitigate this issue, but I do hope as the game progresses some more new camera options become available.

Since many of us also like to compare this game to the Tecmo Bowl series, the request for a side-scrolling camera has been brought up more than a few times. The developer’s response has been that in order to implement this type of view, it would basically take a full rebuild of all the sprites in the game as the view of each character would now be completely different. He hasn’t ruled multiple views out, but at this stage of the game, it is firmly planted low on the “maybe” pile.

Lack Of Depth (For Now)

As far as what is available in Legend Bowl, it’s basically Play Now, Versus, and Career. Online versus is not available, and franchise mode at that point is purely a concept that needs to be created. That’s how early access projects work for those who are not familiar with them, but Legend Bowl accomplishes quite a bit even if categorized as early access. 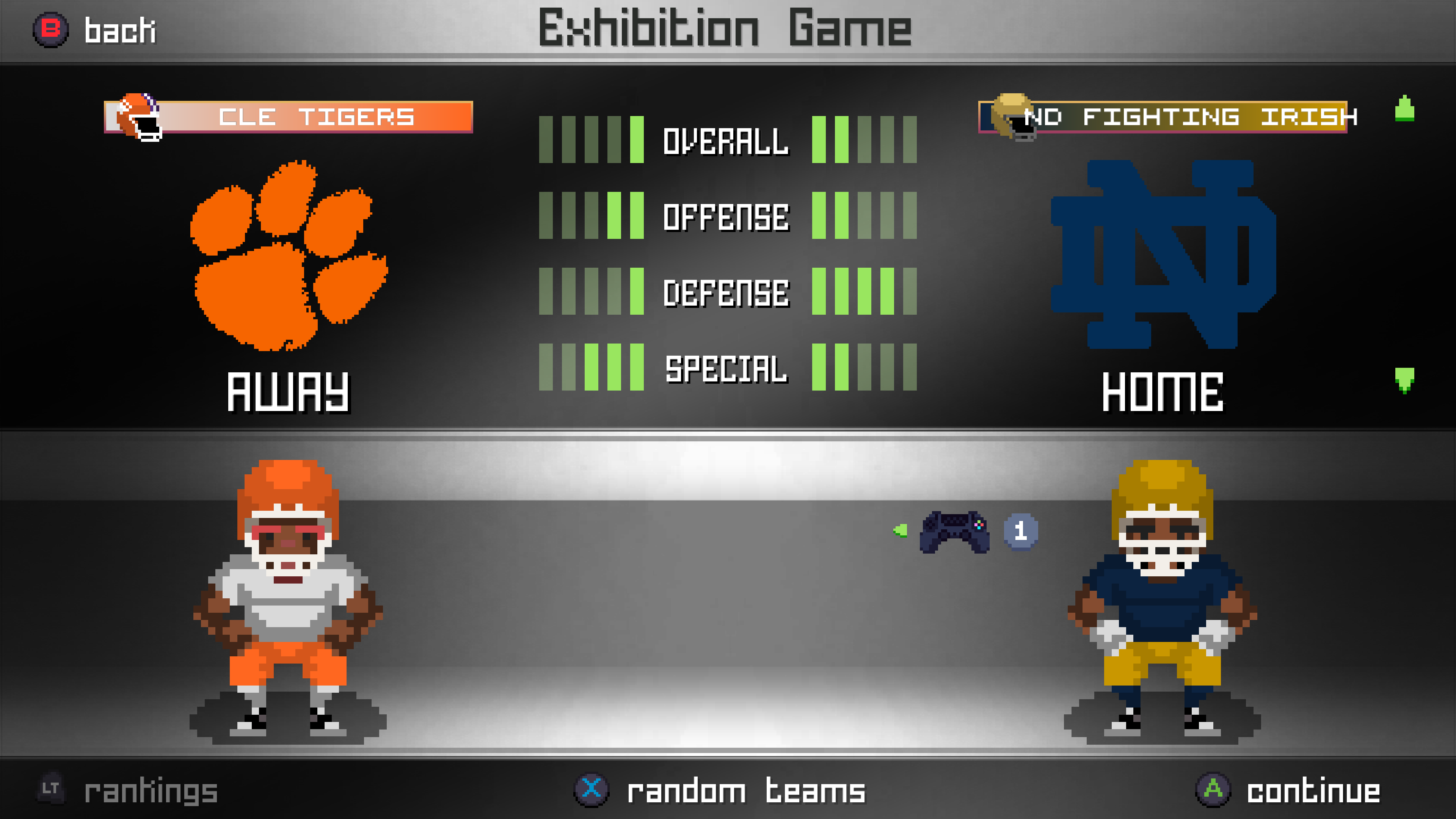 And even while I list this as a negative, in the career mode you can already create a coach, choose your favorite team, and play through an entire season all while accumulating stats, and building up your training and playing facilities. My point is, while the game lacks a bit of depth right now, if you understand where the game is heading and what the developer has in store, the lack of depth should become a non-issue moving forward.

Jumping aboard a title during early access can provide a range of excitement and disappointment, especially if the developers lack vision or struggle to communicate what the final product will look like. With Legend Bowl, the developer has plans detailing exactly where he wants the game to go, and maybe even further.

“We will keep building on existing features and implement new ones with the goal to expand the gameplay experience, add more content, and overall make the possibilities in the Legend Bowl universe more bountiful.

On the field, the gameplay is a priority for us and has been since day one. We plan on tuning and improving the on-field gameplay with your help and feedback with the goal of having an authentic representation of the sport in the end mixed with lots of fun. We also plan on further building out the Career mode with things like player progression, trades, injuries, and multiple years. In addition to these, we are eager to hear your thoughts on what the game could benefit from.”

It’s very typical during a review of a title that is in early access to continually point out the game is still being developed and is still months away from being complete. With Legend Bowl, it was necessary to shroud the title with this type of disclaimer. As I mentioned, the career mode still lacks depth, and the franchise mode still needs to be fully developed and implemented — it’s currently listed as TBD. Even so, the game is polished and full of different ways to enjoy it.

Again, the game is only available on Steam at this moment, with definite plans to move to console at some point and even a small chance of a mobile version.

The real bottom line is Legend Bowl delivers an extremely fun game of football that can be modded, adjusted, and has a developer that is extremely passionate about what he is creating here. For $19.99 (USD), you can’t go wrong even during early access.