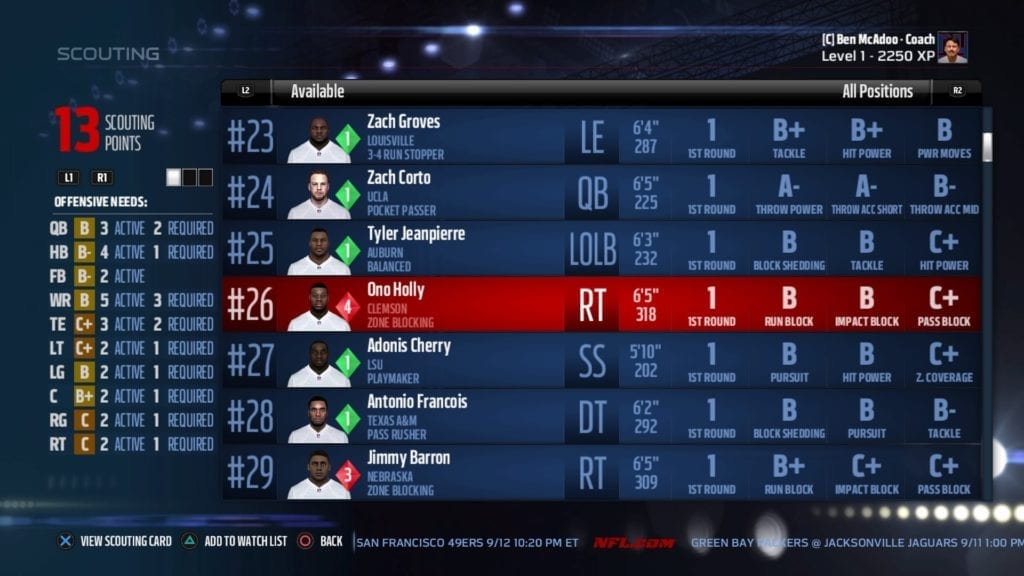 Every year, NFL fans pick up a copy of the new Madden game for a chance to put themselves in the shoes of elite players like Aaron Rodgers and Cam Newton. Or maybe they hope to accomplish things that would likely not happen in real life, like leading the Browns to a Super Bowl, or plugging Tim Tebow in at quarterback and having him actually complete a pass.

But for me, the best of part of Madden only occurs once I’ve finished a season or two of my franchise and begun to draft the players that will slowly become the future of my team. Because as fun as it is to be able to control all of those intricately replicated real players, the game truly comes to life as you accumulate guys who not only will never play football in real life but will never even have a chance to exist.

It usually starts with a name. I’ve always been drawn more to players in draft classes whose names attract the eye. While quarterback Jimmy Smith might be the hot prospect that’s at the top of everyone’s draft boards, I’ll have my eye on the wide receiver with the unfortunate/brilliant name of Johnson Johnson — the player so nice they named him twice.

The beauty of all these new players invented year after year for the draft is that there’s no real information on these guys. Aside from physical attributes, what school they attended, what scheme they prefer and a few scouting assessments, they are all blank slates and we’re free to imagine anything that we like about them.

For instance, Johnson Johnson came from a very poor family who couldn’t even afford to give him two different names. He broke his foot in high school while stealing a loaf of bread to feed his hungry brothers and sisters — all eight of them — and was forced to miss most of his senior year. Shortly after being drafted out of Notre Dame (where he graduated with honors) and signing a big contract with my team, he moved them all into a huge mansion and then met the love of his life, Phyllis — a doctor. That’s right, Johnson Johnson started from the bottom — now he’s here — and I’m only happy I had a hand in making it all happen for him.

That’s only just the beginning for guys like Johnson Johnson. Once they hit the field, they start accomplishing things that can lead to them becoming the biggest superstars in the league, soon eclipsing the real-life superstars like Antonio Brown when those poor guys begin to get old and slow. Sure, maybe you target Johnson a little more than other guys with your quarterback because you know and love the kid, but who cares when he’s racking up games with 300 yards receiving because of it?

And once you’ve played enough seasons of your franchise, the inevitable happens even to Johnson Squared (his nickname, obviously). He’s eventually forced to retire and, though you know he’ll do just fine in his second career as a broadcaster/actor/humanitarian, you can’t help but get a little emotional when he plays his last game. You watched the kid crawl his way out of poverty and make something of himself on the football field that will surely land him in Canton someday, but damn, you’re really going to miss the guy.

Every year, I’m tempted to immediately simulate 10 years into the future when I start my franchise just so I’ll be surrounded by all of these fictitious players longing for a backstory right off the bat. But somehow it just wouldn’t be the same. It’s much better to let them slowly come into your life, mingling with the real players and giving you a better opportunity to get acquainted with them so you can learn how to properly utilize their greatness.

Over my many years of playing Madden, I’ve had the great fortune to be able to mold some legends. Sure, there have been some choice names — like an Asian Glass I remember being drafted last year — that don’t amount to much more than a laugh before flaming out once they hit the field. But the great ones stay with you and become just as ingrained into the fabric of football as any other great who actually played the game for real.