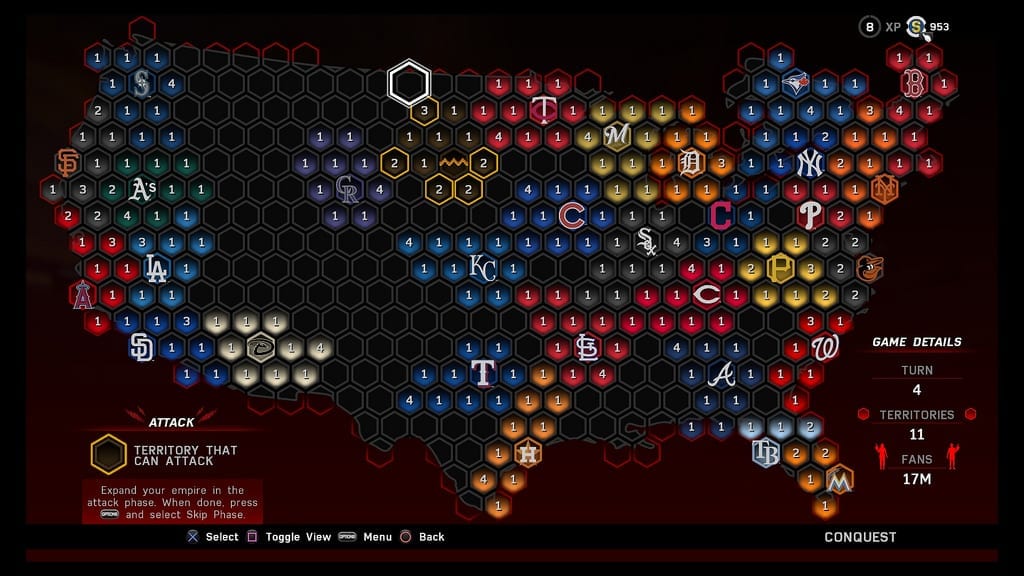 When it debuted last year, MLB The Show‘s Conquest mode offered a very interesting way to enjoy Diamond Dynasty, even if you didn’t want to venture online. Essentially, it was Risk, the classic board game, but you were battling it out with baseball instead of dice. And despite the seemingly odd mix of gameplay elements, it was an enjoyable experience; it may have captured most of my MLB time during 2016.

So I was excited to see it return this year. Unfortunately, it was relatively unchanged. While the mode has a firm foundation, so to does it have a lot of room to grow. Risk is a board game from the 1950s that hasn’t aged well (Risk Legacy is amazing though). A quick glance at boardgamegeek.com shows that it is the 12,749th “highest” rated board game of all time. So while it’s a classic that most know how to play, it isn’t necessarily anyone’s favorite.

Here are few ways the mode could be improved by incorporating some more modern board gaming elements.

Conquest as it stands is fun, but it is running on a very old-school framework. Certainly the MLB The Show team can spice things up for next year to keep interest in the mode high. What would you like to see improved about Conquest mode?