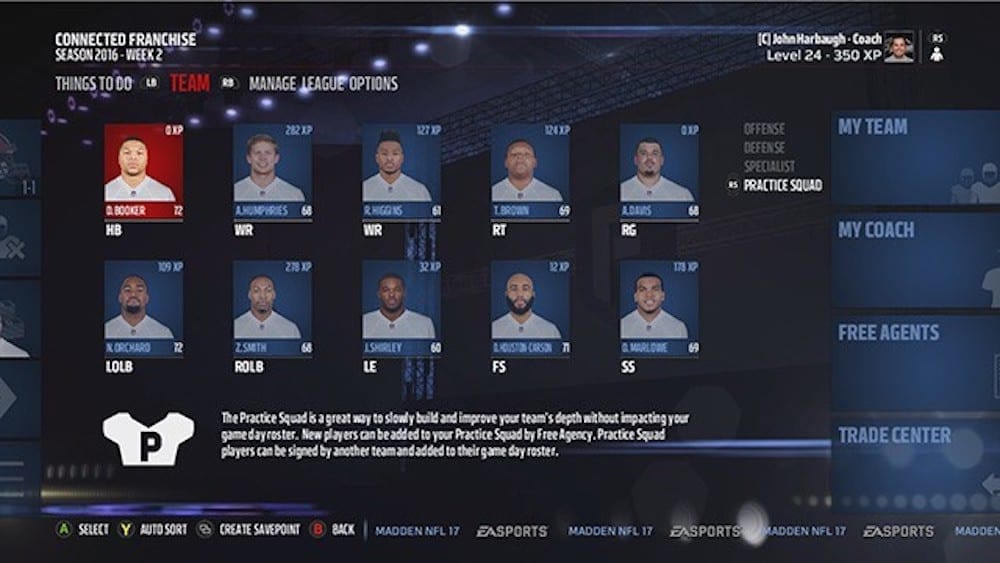 In this year’s iteration of Madden, we’ve been introduced to some new features that enhance the game. One such feature is the practice squad. Just like the real NFL, Madden 17’s practice squad causes you to really think about how you want to mold your roster.

Introduced by Cleveland Browns coach Paul Brown in the 1940s, the “taxi squad” was a collection of players that were scouted and considered to be highly talented, but not skilled enough to make the starting roster. In order to work his way around league rules and keep these players as reserves for the team, Coach Brown made an agreement with Browns owner Arthur B. McBride where the reserve players were “hired” by his taxi company and listed as employees. These players would never actually work for the company; they would get paid through the company, but would practice and train with the Browns’ official roster players.

What Does That Have To Do with How I Play My Franchise?

Now known in the NFL as the practice squad and introduced in Madden 17‘s franchise game mode, this 10-man roster allows you to develop and train various positions during your weekly training. These players will usually be newly drafted rookies or undrafted free agents (UDFAs) that a player feels can become the “next best thing,” or players that can fill holes in their roster. Players that have two full years of NFL experience or less are allowed to move to the practice squad, so don’t think about stashing your veterans there.

How Does The Practice Squad Work?

Your 10-man practice squad can be used from week to week, starting as of week four of the preseason. If you want to see how these players play, you can head to “free practice” to take them on a test run on the field. At any point in the season, a player from the practice squad can be demoted to your 53-man roster; you can also send an eligible player to the practice squad from the 53-man roster. This is, again, the best way to train one of your rookies or young players that might have a low overall rating, but possesses the “quick” or “superstar” development trait.

The one thing you do want to keep in mind is that, just like the real NFL, practice squad players are still free agents; they can be snatched up by any other team in the league for their own active rosters. You can, of course, do the same if there’s a player on another team’s practice squad that catches your eye.

After the first three weeks of preseason in my franchise with the Denver Broncos, I found myself taking the time to analyze every player on the team that had a lower overall rating, checking to see what their development trends were. I also looked at all the other teams in the league to see if their respective practice squad had players with a higher development rate I could snatch away to add to my team. I did this because I’ve always liked to play with teams comprised of younger players that have the ability to develop quickly to make an impact on the field, mixed in with my seasoned players I could lean on for all four downs.

The addition of the practice squad makes you think like a head coach or scout. You’re trying to make the best decision for your roster, not only for the short term, but the long term as well. Madden 17 really puts this feature to use, and it works great. Make sure to load your practice squad with those diamonds in the rough and develop them to become the superstars of the future.