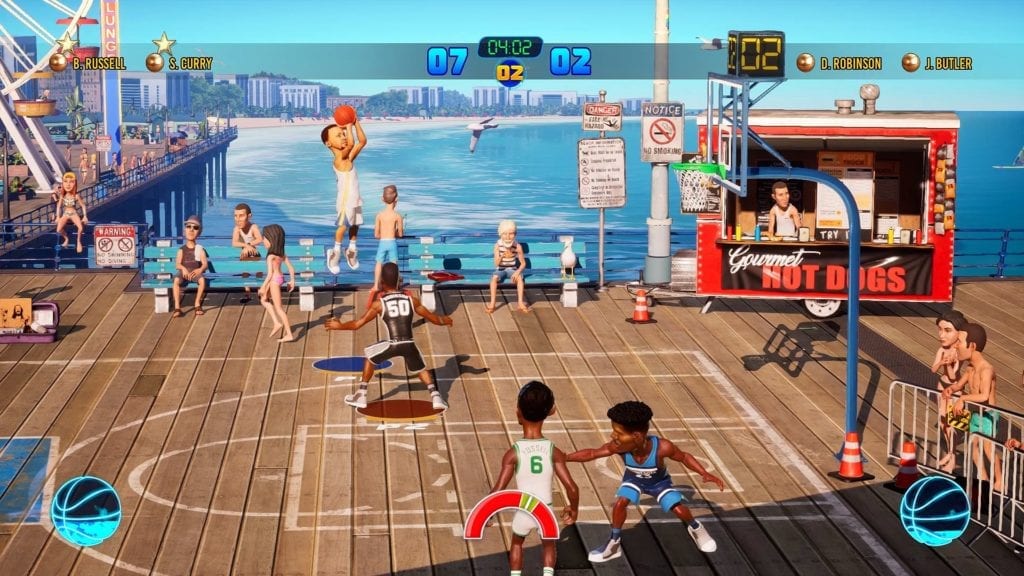 Last week I was able to sit down and play two games of NBA 2K Playgrounds 2. The original Playgrounds flew under my radar, so I was surprised and excited to jump in and give this a try.

Right off the bat, the game looked and felt great, plus it definitely brought back some long-repressed NBA Jam memories. The goal back then wasn’t (and still isn’t) to play “professional” basketball, but to see who can perform the most disrespectful dunk. So as it should be, my teammate and opponents were all sitting next to me in the flesh so the trash talk could flow liberally and freely.

Unfortunately, the trash talk wasn’t coming from my side of the room, as I got destroyed. Twice.

Part of the problem I think was that my teammate and I were both having a hard time figuring out shot releases. We bricked wide open three-pointers and even some layups. There is a shot meter, and I think it was wanting me (us) to hold down shots longer before releasing, but it was hard to tell. There’s a lot happening on-screen during a game and it was honestly overwhelming at times.

But despite being seriously humbled, I can honestly say I had a smile on my face the whole time we played.

Speaking of overwhelming, I was surprised to see the vast amount of NBA players in the game. I was mainly using the Rockets, and essentially, Playgrounds has all the same players that are on the Rockets 2K All-Time team. So I can now say, from experience, that doing a triple somersault dunk with Yao Ming is just as fun as it sounds.

We didn’t get a chance to see any other game modes or features, so I can’t comment on the bigger picture, but based on just playing 2K Playgrounds 2 for half an hour I’m definitely intrigued. Being a part of the 2K basketball family can only help, and I’m hopeful that in addition to being fun, it will be a deep game with lots to do. I definitely can’t wait to learn more, as this game looks to fill an arcade-style basketball void in my soul that I didn’t even realize I had.