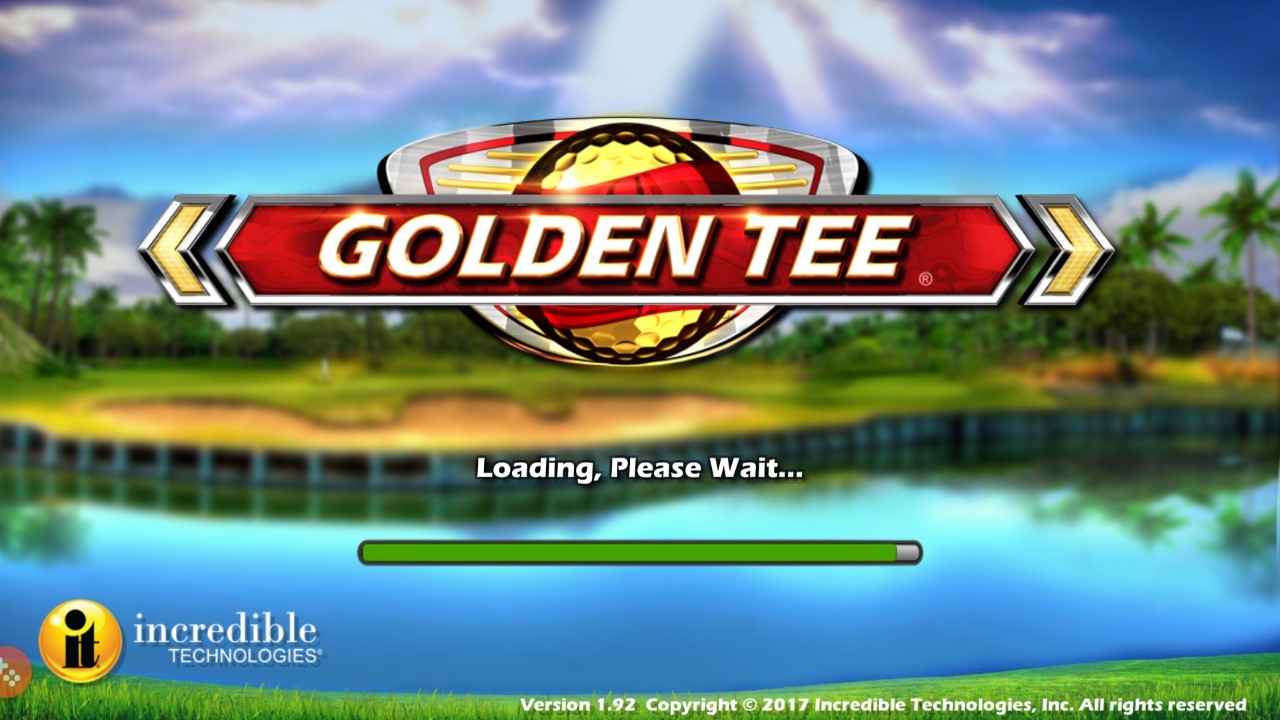 The original Golden Tee Golf was released into the golf gaming community in 1989. It was then re-released in 1995 and also in the year 2000. Golden Tee gained fame through the years for being a go-to staple in both arcades and bars. It was extremely successful, and to this day people all over the world compete in live tournament play using arcade units. Golden Tee has now returned with the free-to-play version, Golden Tee Golf Mobile, bringing the game right into the palm of our hands. I downloaded and installed this game with anticipation, but questioned whether or not Golden Tee Mobile could reproduce most of the same golf experience as the arcade version. With that said, let me tee up my review of Golden Tee Golf Mobile.

In terms of mobile gaming, I don’t really have a high expectation for graphics. Just for comparison, there are graphically fantastic mobile games out on the market now such as Nimian Legends and Asphalt 9: Legends. While those games are not in the same genre, they can be targeted as comparisons for the top tier of mobile graphics. Golden Tee Golf Mobile opens up your experience by walking you through a basic tutorial on how to play and navigate the game.

After the tutorial, it was pretty apparent to me that this version of Golden Tee has done a great job of recreating the same feeling I had of playing the game on the arcade unit (minus the physical interaction of using the trackball and buttons). The graphics are above average and the gameplay is standard. You have the ability to hit the ball with a variety of ball flights. Draw, fade, straight all can be accomplished with the correct directional finger swipe. Uphill shots and downhill shots affect the distance control and wind alters the flight as well.

In general, I’m happy to say I like the gameplay and am not disappointed. Staying true to its arcade history, Golden Tee Golf Mobile gives you ample opportunity to take advantage of a variety of boosts, and gain power, spin and chances to lower your score. 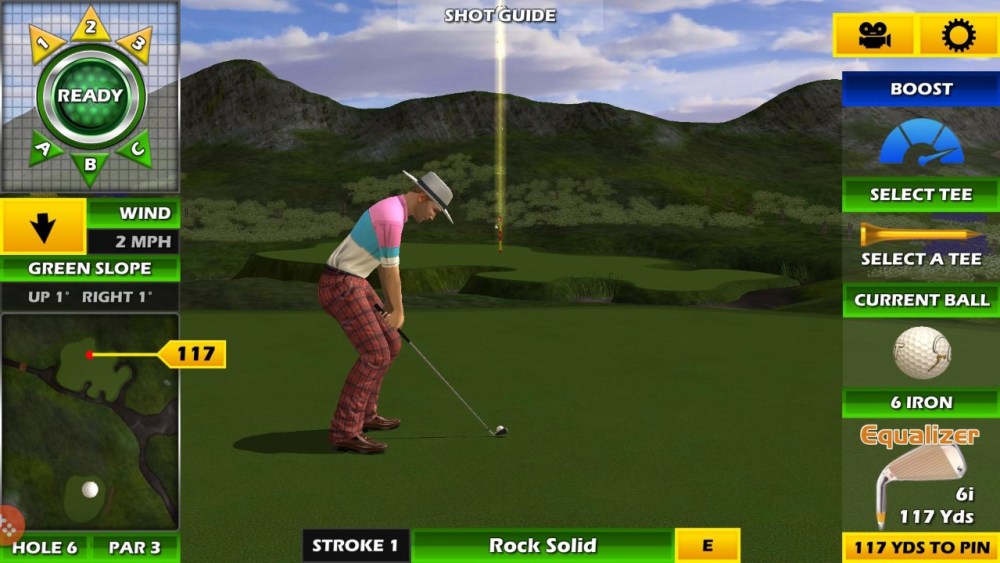 With mobile games, developers have to be very careful with how they assign game controls. This is because there are so many different types of phones with varying screen sizes. The Golden Tee Mobile control system works very well. Hitting the golf ball consists of a simple swipe down for the backswing and swipe up for the downswing. However, this will take some time to master because some flicks of the finger can be hard to judge, especially when faced with touchy short bunker shots or short par saves. And, yes, it’s also detrimental if you have a dirty spot on your screen.

When you want to aim the shot, you use two-finger touch to aim the shot left or right. What I love about the controls is the ability to reset your backswing. In some golf titles if you accidentally swing too far or too little, you’re not able to return to the ball without producing an undesirable shot. However, you have the option to reset your swing if your backswing is too long or moved by mistake.

Putting I felt was an area that was a bit touchy. Trying to hit a delicate putt or manage downhill speed was a bit challenging. The good thing is the variety of shot controls are positioned on the outsides of the screen, which helps to keep you away from any mistake swings. The tiles on the outside of the screen include items such as tee type, ball type, club selection and a shot HUD to aid in the shot you are trying to create.

Golden Tee Golf Moblie includes a variety of game modes beyond the standard nine or 18-hole round. You can choose from Campaign, Contest, Challenge and Daily 9. The Challenge mode is a great addition when you are looking for a quick hole to play or just want a simple challenge. The design of this mode gives you three shots on each hole in an attempt to get the ball as close as possible to the pin or complete the challenge. I love the amount of variety, and it is substantial considering Golden Tee Mobile is a free-to-play title. However, with it being free to play, it is of course worth noting that you will be asked quite a bit to pay up. It’s the nature of the beast, and so if you don’t like that obtrusive stuff then you’ve now been warned.

The other modes — Campaign, Contest and Daily 9 — provide you with enough variety to keep the game fresh. Reiterating the fact that this is a free to play game, there are also numerous in-app purchases to upgrade your game faster. Whether this is from upgrading equipment, clothing, courses and so on, you have the option to get better and dominate the course. If you don’t want to make these purchases, you do have the opportunity to unlock many items as you progress through each mode. 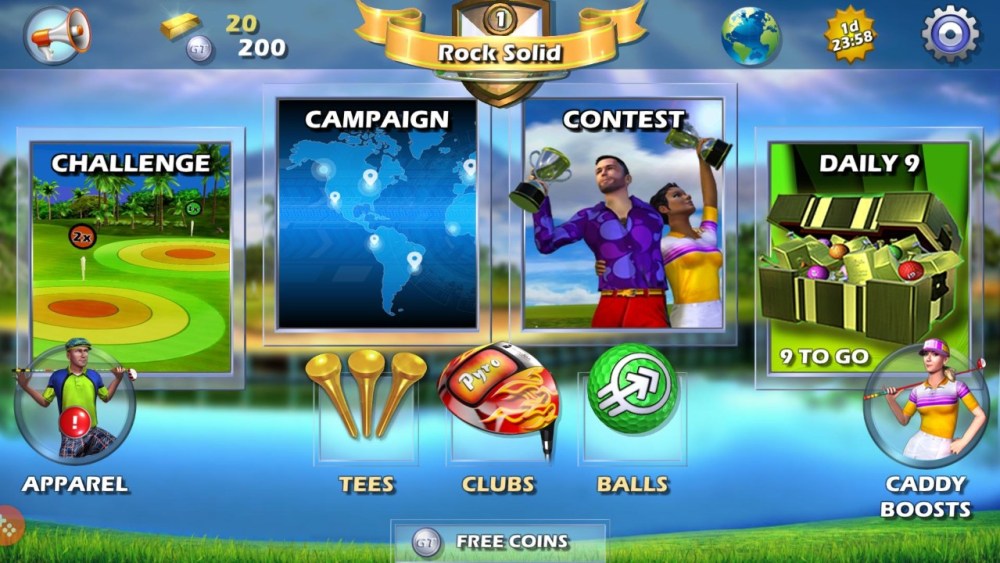 Golden Tee Golf Mobile is fun in that mobile game type of way. There is a distinct difference when experiencing mobile games versus arcade and console. In my opinion, the majority of the fun in this game comes from the variety. If you are able to play through a variety of game modes, you find more enjoyment. There are customization options in terms of apparel. If you take the time to learn how each tee boost and ball boost works, you will enjoy how each can impact your play. Overall, the enjoyment you get from this game can be a bit hit or miss. It depends on how serious you take your golf game.

I did have some difficulties with the setup of the game. This was mostly due to landscape mode. I had to move my finger over the middle of the screen each time I wanted to take a shot. I think the game could play much better in a portrait layout. This could possibly happen in some kind of game update. In landscape mode, it makes it obvious that you are indeed gaming. This limits the ability to play the game in an office or school environment — I’m just saying. If you want to get in a quick challenge hole or a quick nine, it can also be hard to do so. 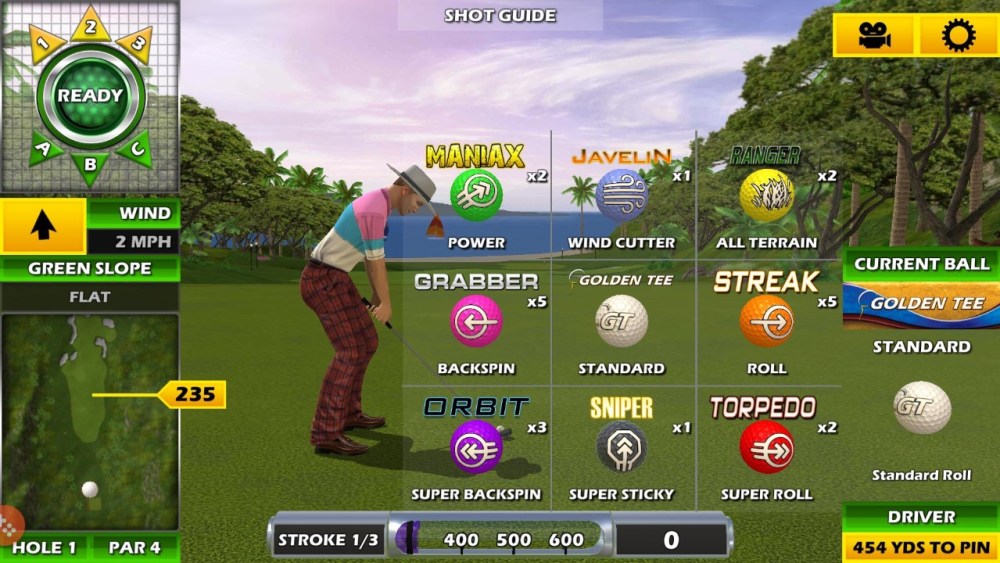 Golden Tee Golf Mobile is a fun golf game. Straight off the install, the game delivers as a solid recreation of a game many people fell in love with many years ago. There are a variety of courses to play and each provides its own distinct flavor. The option to engage in several game modes, ranging from quick play options to multiplayer, is a smart setup. If you played Golden Tee in the past, I don’t believe you will be disappointed by the mobile version. Get to your phone now and tee it up.

Doug Flutie’s Maximum Football 2019 Review: Back to the Drawing Board
Lonely Mountains: Downhill Review - Trials and Flower Had a Baby