While we regularly discuss plenty of sports video games on this site, it’s not often that we talk about actually engaging in the kinds of physical activity that’s depicted in these video games. But with the very different world that we’re living in these days, it’s become increasingly difficult to find opportunities to get in a daily workout, whatever that might typically look like to you. In an age of social distancing, it’s entirely possible that you can still go for a walk or a run by yourself to get the blood flowing, but for some their routines have been upended. So if you’re looking for new ways to workout, perhaps consider some PSVR games to exercise.

If you have a PSVR, there are plenty of fun games you can play to help get you moving and sweating. Some are simulations of existing sports, some are completely new sports that have been created for the VR realm, and others aren’t sports at all but require the kind of dexterity and athleticism associated with sports. What they all have in common though is how they provide the ability to maintain a healthy lifestyle in the midst of a pandemic and help you avoid falling into a sedentary existence while waiting for things to return to normal.

Pro tip: it’s a good idea to wear a headband or something similar while you play these games so you don’t get too much sweat all over your PSVR headset. 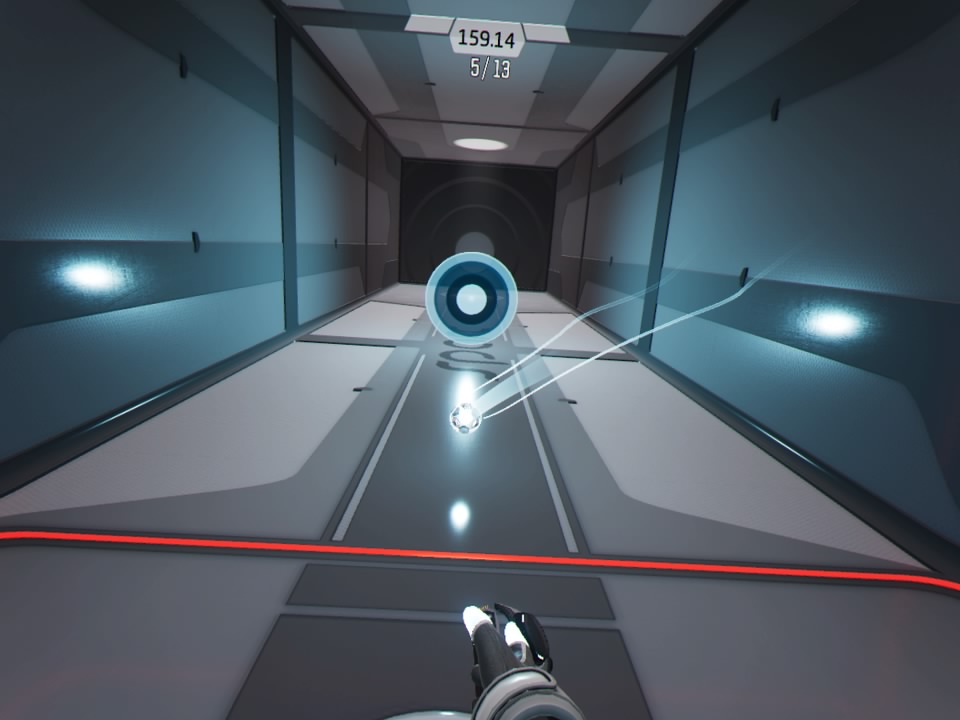 Like Rocket League, Sparc is a sport that simply couldn’t exist in real life. Instead of piloting rocket-fueled cars to strike soccer balls into nets, Sparc is a one-on-one futuristic game that sees you trying to throw or deflect a glowing ball into your opponent. That may not initially sound like the most strenuous activity but when things ramp up in Sparc (and they can in a hurry), you’ll be flailing around wildly enough to find that you’re often fairly worn out by the end of a contest.

Placed at one end of a long tube and facing your opponent who’s situated at the other end, the basics of Sparc are pretty simple but there are some strategic elements that keep things interesting. For instance, you’re equipped with a shield that can not only block but also deflect your opponent’s ball back for a point. The catch with the shield though is that it vanishes every time you toss your own ball to hit your opponent, leaving you vulnerable to attacks from their ball. Of course, you can still dodge their throws without a shield to protect you, but this can be tricky when the ball is bouncing off the walls or coming in at you with some strange spin on it.

Things get even more complex with the way you can earn strikes by hitting the strike zone directly behind your opponent with your ball, causing your ball to get a little larger and faster with every strike. You also have to remember to catch your own ball when it comes hurtling back at you off the far wall or you can give your opponent a point by allowing your ball to hit you. When both balls are flying through the air and you’re trying dodge one of them and catch the other, it’s easy to lose track of things and give up a point if you lose focus.

Rounds go to five points and the best two out of three rounds win the match. While you can practice with some inventive challenges to help you get accustomed to throwing the ball, the game’s at its best when competing online. The community for the game isn’t huge or anything, but it’s quite loyal so it’s never too hard to find a game. On top of that, most of the people you’ll meet on there are also rather friendly and helpful. All in all, it’s a good recipe for staying fit and social. 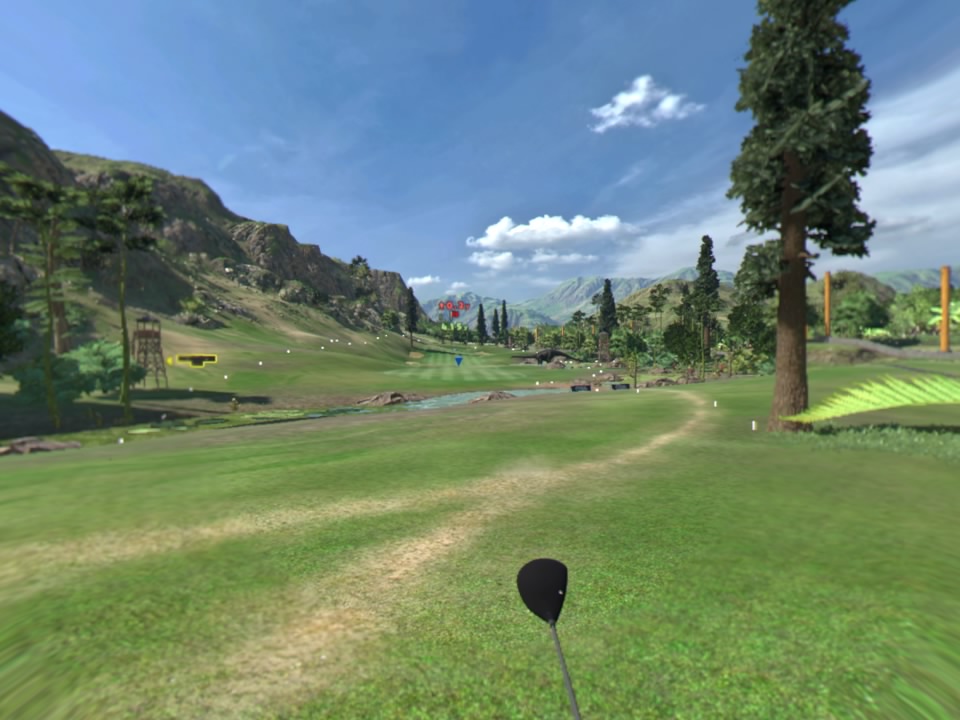 Okay, let’s face it, golf is hardly the best sport when it comes to breaking a sweat. There’s not nearly enough continuous action for your heart rate to rise all that much, and it’s essentially just the same movement over and over again. Yes, there can be a great deal of walking involved if you didn’t invest in a golf cart, but you can’t really expect that aspect of the sport to make the transition from real life into the video game, can you?

Nevertheless, Everybody’s Golf VR is an admirable attempt to faithfully re-create the lion’s share of the experience of actually being out on a course. Hitting a drive straight down the middle of the fairway feels as satisfying as it is frustrating to shank one into the rough and approach shots can be challenging to find the right touch. The real treasure of the game though is the putting, as the chance to practice on a green is a great way to kill a spare 15 minutes or half-hour. There are even some things in the game that you couldn’t find if you were to play a round in the real world, like dinosaurs on one course (which are awesome) and cartoonish caddies (which are not at all awesome unfortunately). The only glaring omission is the ability to play rounds online with other people.

Perhaps the biggest benefit of playing golf in a video game is that it eliminates much of the downtime between shots and ensures that you are swinging in more frequent bursts. This sustained movement makes it possible to have it feel like more of a workout than if you were getting in a cart and then forced to wait patiently for your next chance to hit your ball. 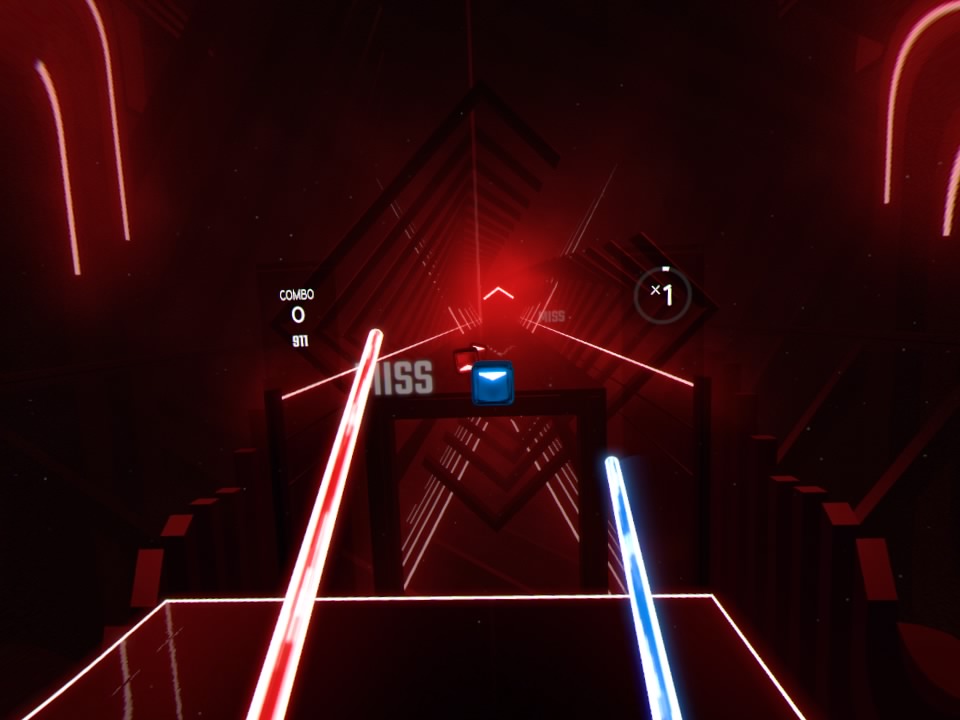 A rhythm game that feels like the natural evolution of titles like Rock Band and Guitar Hero, Beat Saber sees you brandishing two light sabers to break blocks in time with songs. As you increase the difficulty level, the blocks come at you faster and closer together, which in turn has you moving your arms rapidly in what becomes something not too dissimilar to dancing. If you push the challenge all the way to Expert (or Expert+ if you really dare), it won’t take more than a few songs before you feel the first few beads of perspiration roll down the back of your neck.

The songs themselves are a bit of a mixed bag, with a bit too much techno music for my own tastes, but many of the more pop and hip-hop songs are catchy enough to get stuck in your head for days. The game’s been decent about adding new tracks regularly, but PSVR users can justifiably complain about a lack of selection when they jealously sneak a peek at the PC version of Beat Saber and long for their ability to create and upload custom tracks. At least we still have the recent Green Day pack to satisfy anyone like me who still likes rock music, and the Imagine Dragons pack has done the seemingly impossible and actually made me like a few of their tunes. 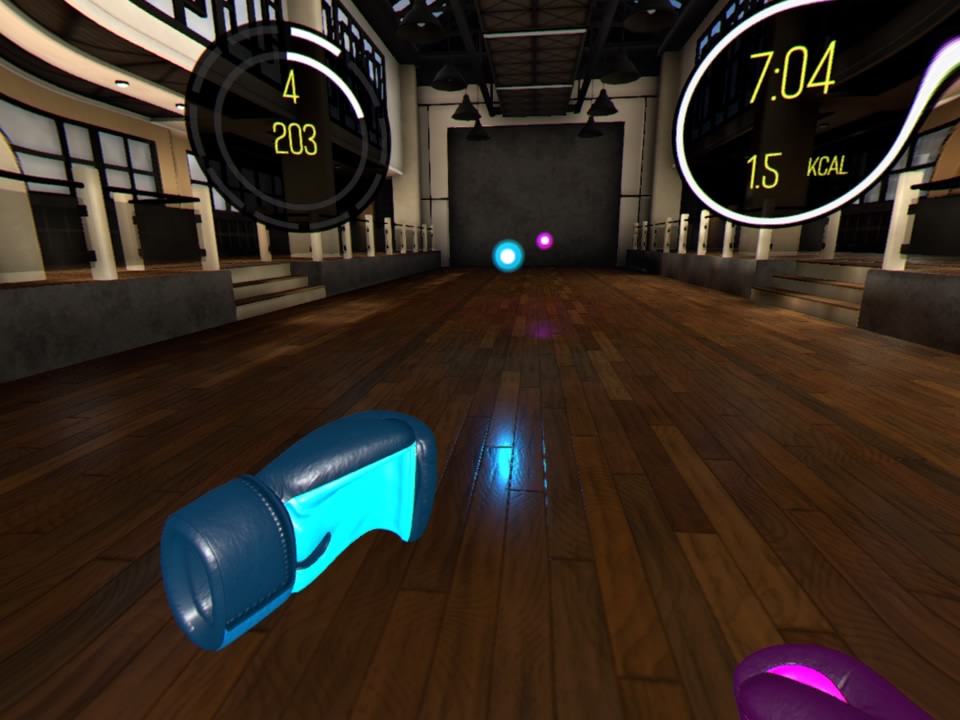 If you’re looking to really get some exercise, BoxVR is probably the game best equipped to give you all that you can handle. It allows you to choose from all sorts of classes of different lengths that have been curated by various trainers so that you can decide how long you feel like devoting to being active. You can set daily goals for yourself and even track the number of calories you’ve burned from workouts throughout the week, though the calorie tracking does seem to leave something to be desired in terms of accuracy.

The classes themselves have your hands turning into boxing gloves and mimicking all the types of punches that you would use in the ring — everything from jabs to crosses to uppercuts. The prompts come fast and furious with little opportunity to catch your breath, forcing you to keep your arms moving consistently throughout your class. But it’s not only punches that you can expect. You’ll also have to block, dodge and duck at different intervals. The squats required for the ducks can be particularly grueling and it’s not uncommon to feel like your legs may give out on you during longer workouts.

The music that accompanies each of the classes will get your body moving into a steady rhythm and, though I can safely say that I don’t think I’d ever heard a single song before or outside of this game, they usually contain some sort of inspirational message or stomping beat to further lift your spirits when you might feel like giving in. If you manage to make a steady routine of participating in the classes and combine that aerobic exercise with a healthy diet, there’s no reason why someone couldn’t drop a few pounds with some help from this game.

Once you’ve had enough of the kind of training BoxVR provides and are ready to actually fight someone in the ring, Creed: Rise to Glory is the next logical step. While having some training components as part of the game, the real appeal of Creed is in how it captures the spirit of the Rocky series in the ring and allows you to feel like you’re part of the same universe as Rocky Balboa and Adonis Creed. It’s hard not to turn on the game and hear the familiar notes of “Gonna Fly Now” without wanting to throw hands with someone.

The story mode in the game shouldn’t be too foreign to anyone who has played boxing games as far back as Mike Tyson’s Punch Out!, requiring you to beat increasingly stronger opponents as you work your way through the ranks. The action between the ropes is relatively intuitive and surprisingly nuanced, requiring players to take an approach that balances throwing punches with ducking and blocking. If you punch too much, as people are likely to do in a VR boxing game, you’ll find the accompanying dip in stamina leaving you open to getting knocked down and perhaps even knocked out.

Once you’ve had enough of fighting the CPU, you can also take you skills online and square off against others in the sweet science, which is where you’ll quickly find out how you really stack up in the grand scheme of things. Whichever way you choose to play though, there’s plenty of physical activity involved as you bob, weave and try to pummel your opponent. Just make sure you don’t move too much though, as it’s the kind of game that can be so immersive that there’s a real danger you’ll move so much during a match that you end up accidentally punching your television if you’re not careful.

Everybody's Golf VR: The Next Best Thing to Being on a Real Course