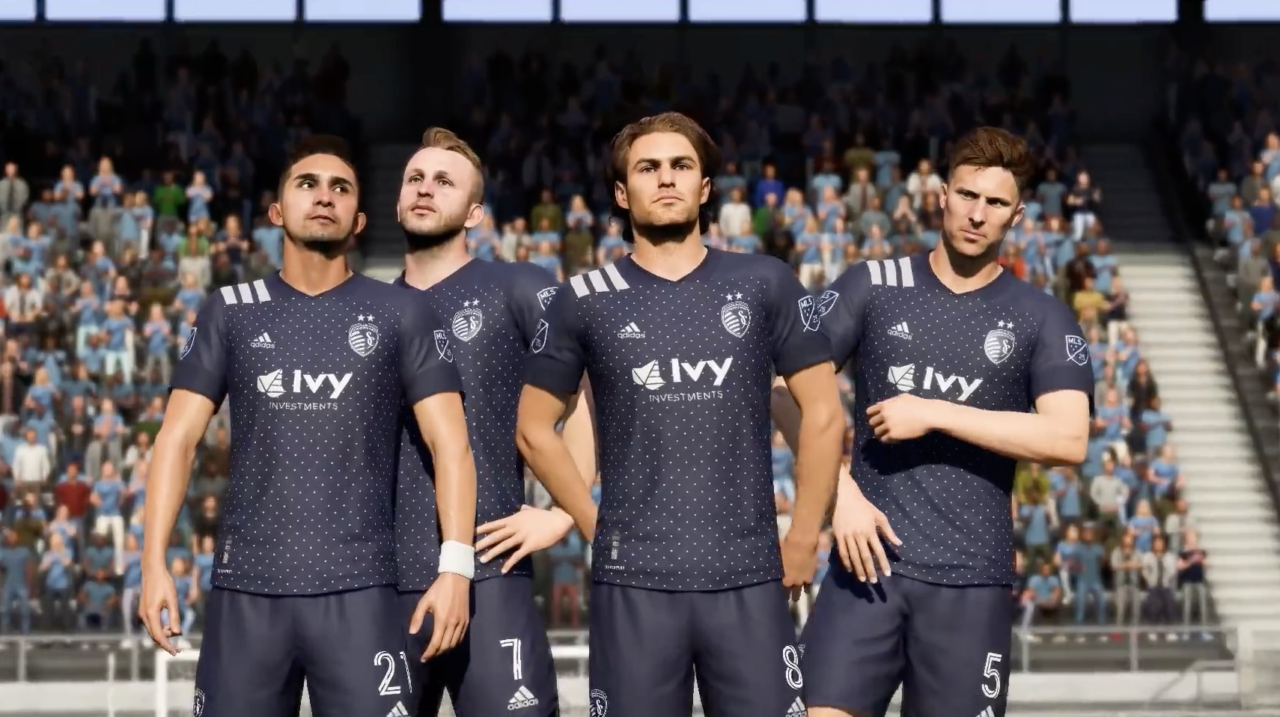 In part one, I broke down FIFA 20’s player training development system. It’s a long read but hopefully you got something out of it. In part two, we’ll see how this player progression system stacks up in four areas: realism, consistency, depth and enjoyment.

Despite flaws elsewhere in career mode, FIFA 20 does a decent good job when it comes to player progression. Through the training module, you can target areas of weakness and, depending on how good you are at the training drills, you can really hone in and progress your players. As an added bonus, getting better at training drills not only helps your players but helps you as a FIFA player whether it be learning new commands or refining your skills.

To test the realism within this mode, I set up a simulation with my beloved Chelsea. I selected three players:

Abraham and Reece James are first-choice players at their respective positions with Mount slotting in for major minutes at CAM/RCM.

Before we get to the results, it’s important to note how this mini simulation was run.

I set up three training presets. Each preset consisted of one drill for the players listed above participating in one easy, medium and hard drill. With training available every Sunday (unless there’s a match), I rotated between “easy/medium/hard” presets. Every week, all the drills were simulated so the results (letter grade) were random. Of course, there were some weeks when certain players weren’t available due to injuries, national team call-ups, and so on, but for the most part each player received significant attention on the virtual training pitch.

We’ll start up top with young Tammy Abraham in year one. As you can see, he’s 21 and currently rated a 78 OVR. Not bad, but as you can see by his stats on the second picture, he’s average physically with no standout stats when it comes to pace or strength. When it comes to technique, his best attribute is his finishing, which isn’t a bad thing but there’s certainly room for improvement. Since he’ll be the first choice striker, he’ll have plenty of opportunity to improve. 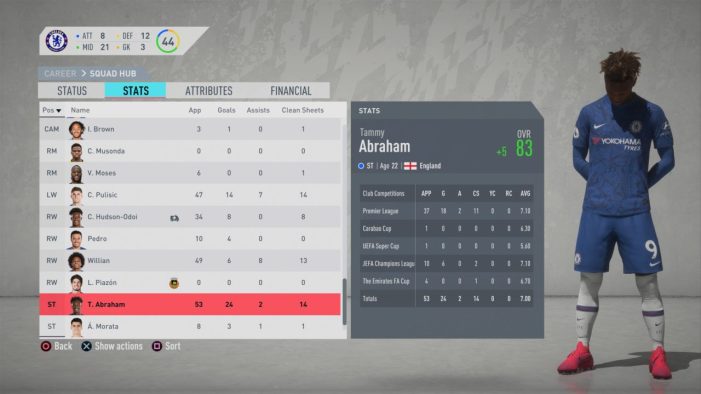 Fast forward to the end of the year and we’ll see his return. 18 goals from 37 matches in the league with an average match rating of 7.18. Also, 6 goals in 10 Champions League matches is nothing to sneeze at. Overall, not a bad year at all for a first-year starter, especially one that started as a 78 OVR. As you can see, his OVR rating jumped up 5 points, up to an 83 OVR. Let’s see how his individual stats looked at the end.

The first thing that jumps out to me is his overall value. His original value wasn’t listed but it was roughly $18 million meaning that his performance and progression increased his value by nearly $12 million! Since FIFA uses a weight-based calculation for ratings based on position and positional attributes, a +9 increase in his finishing has made Tammy very potent in front of goal (91 finishing). Furthermore, he’s progressed physically when it comes to strength (85) and pace (86 sprint speed). It’s hard to put a finger on exactly how dynamic potential works in FIFA 20 but if the real-life season would play out, Tammy would most likely be close to 18 league goals in real-life by season’s end. It would be interesting to see what he’s rated in FIFA 21. If I had to guess, it would be in the 81-83 range.

Mason Mount is a promising CAM/CM who starts at about 79 OVR at the age of 20 — middle of the pack stats for a player who plies his trade in the middle of the pitch. In this simulation, I used a default 4-3-3 with Mount accompanying the LCM for the majority of his playing time. In order for him to take the next step, he’ll need to get better physically and refine his technique. He already possesses a high attacking work-rate so mentally you know he’s going to be focused and work his tail off. 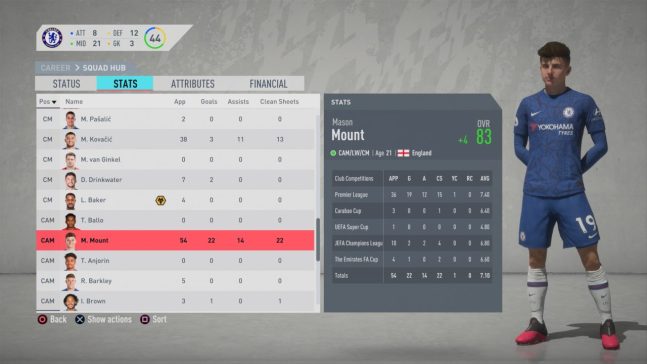 Simply put, Mount had an incredible year, the kind that would have been great for the likes of established stars like Kevin De Bruyne. Bottom line, a 20-year-old midfielder bagging 19 goals and 12 assists in the league is player of the year worthy. An average rating of 7.68 put him as the best player on the team when it comes to league performance, and as a result, his OVR increased by four up to 83.

Mount enjoyed an incredible run of form, reflected by his “excellent” form rating, and saw increases to his physical and technique ratings. With consistent minutes, Mount’s ball control (89) and dribbling (86) increased the most. Two realistic skills that can be improved upon with time spent on the training pitch, more realistic than increasing your pace that significantly over the year where most players would probably lose a few points due to accumulated fatigue and/or injuries. Because of the great year he had, his value jumped up 79 percent to 30 million. While he started off hot in real-life, Mount went through a barren stretch. Regardless, his projected OVR for FIFA 21 isn’t that far off from an 83 OVR, but realistically we’re probably looking at ~80-82 OVR.

If we look at where Reece James starts, we’ll see that he’s a promising right back better suited as a backup for a club like Chelsea. Perhaps he’s a bit underrated to start, but he’s got a good base to start with mostly green physical traits and fairly decent technique stats apart from that 48 finishing (ouch!). With a little attention on the training ground and some minutes, let’s see how young Reece looks. 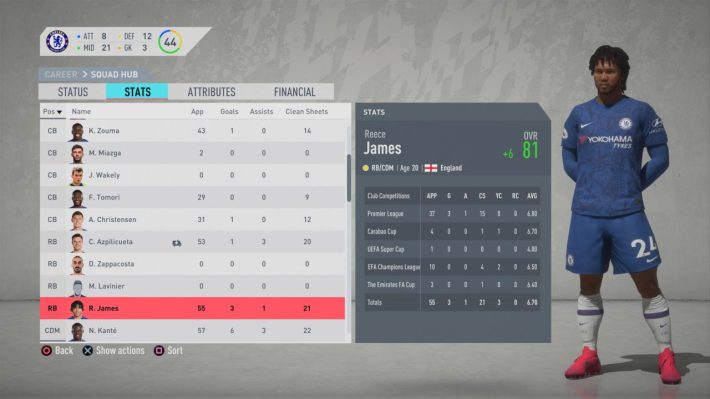 Reece made 55 appearances across all competitions with 37 starts out of a possible 38 matches. Good experience for a young player and some fairly solid performances as his rating across all 55 appearances was a 6.7, which is fairly solid for a defender. As you can see, his rating jumped six points up to a 81, making him the biggest improvement among the three players in this sim. Let’s see how his ratings improved.

The first thing that jumps out is his market value, which increased 105 percent!  With one season under his belt, Reece went from a backup right back with potential to an obvious starter, most attributable to his +10 increase in his defensive awareness, a key stat for right backs. Furthering his defensive improvement, James’ standing tackle and interceptions increased, making him a pretty versatile right back who can get forward and still defend. If we’re projecting his overall for FIFA 21, Reece is most likely to fall within the 78-81 range, so pretty spot-on here.

When it comes to realism, FIFA 20 hits on most of the major marks. With the ability to participate in training ground drills on a weekly basis, FIFA takes a giant leap towards realism and, more importantly, immersion. Throw in dynamic potential, which adjusts based off match performance, and it’s very possible to achieve breakthroughs allowing for you to actually spend time and resources developing your academy products.

In order to see how consistent FIFA 20 is when it comes to player progression within career mode, I ran a similar simulation as mentioned earlier with the only exception being no individualized weekly training sessions. Therefore all improvements can be attributed to a combination of match performances and natural progression. Using the same three players and basic formation (4-3-3) I got to simming!

Here’s a reminder of how Tammy Abraham starts out:

And here’s how fared without weekly training drills:

Just like in the first sim, Tammy is at roughly a goal every two matches, which is a pretty good rate of return for anyone not named Messi or Ronaldo. Unlike in the first sim where we trained him up weekly, Tammy progressed very little physically. Let’s take a look at some of his key improvements.

The first thing that immediately stands out is his overall. As mentioned, overall in FIFA is position-specific meaning that you can train Tammy up defensively all you want, it’s still not going to move his overall as much as an increase in finishing would. What’s interesting to note here are how much his finishing, short pass, and sprint speed increased with training. It leads me to believe that my weekly training drills focused on those three things which offers hope to your developmental projects, even if it’s a tad unrealistic.  I won’t overload you with details but the same assumptions held true for both Mount and Reece James. Both players enjoyed somewhat similar seasons as in my first sim but saw lesser increases than they did with weekly trainings.

While increasing your physical attributes by that much in one year might not be the realistic approach, FIFA 20 is consistent in how it approaches player training. Simply put, if you devote the time in training and give your players consistent minutes, they are capable of breakthroughs if the player is still under 30 (even better if they’re under 25). Only focusing on playing games can still see your players improve, but if you’re good at a few drills, you can progress your youth finds on the physical front — where them starting off as poor athletes is far too often the case. Besides, I’m pretty sure Cristiano didn’t magically become fast at 18. Overall though, dynamic potential adds a new element to career mode and finally rewards you for individual on the pitch success.

When it comes to depth, FIFA 20 ticks all the marks apart from a few. What’s missing you ask? Well for one, there’s no way to improve upon skill moves and weak foot, meaning that if you have a one star weak foot (cough, cough Angel Di Maria) then you’ll always be a one star there. While it might be a tad unrealistic to develop your weak foot from a one stars up to five, there are certainly drills in training that you could do to develop your weak foot. Just like in hoops where you work on your off-hand, it’s very possible to further your technique or skills.

Beyond that, the mode is pretty deep with individual milestones such as “playing time” playing a role in your player’s development, which could translate into your overall managerial objectives (develop a youth player into a first-team regular). There’s also a huge influence by “form” although it’s taken a backseat to “player morale” when it comes to the game plans. Much like PES, FIFA 20 could really benefit from a practice mode, especially for your youth players. Imagine calling up a youth team player and not knowing how they control.

My favorite aspect of the player development system in FIFA 20 is the different levels of involvement. If you’re Conte-like in your managerial micro-management you can drill down on the weekly level with what players you want to train, and what stats you want to target. If you want to take it up a level, you can create custom presets and simulate drills. If you’re hands-off, you can just ignore the training system and leave development up to the match performances. There’s no wrong way to approach training, but the more involvement you have, the more you could get out of it, which is huge for folks who like to build squads while working their way up from the bottom leagues.

Unlike PES, FIFA does a pretty good job of tying everything together in a clean user interface, making it very understandable to those folks who are new to career mode. If that’s not enough, there are plenty of resources on the internet due to the popularity of FIFA. Sure, there are little things here and there that could improve, but on the whole FIFA 20 finds a middle ground to satisfy most of our training needs.

How involved do you get in your career mode training? What improvements would you want to see added to FIFA 21?