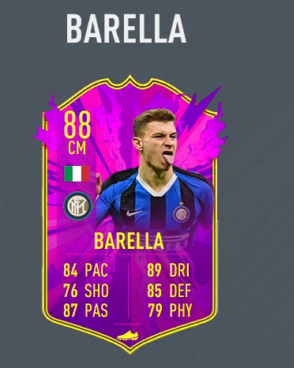 We didn’t get locked out on new FIFA 20 content today, which is nice to see for a Sunday. There’s no new puzzle SBC, but we get a new player SBC: FUT Future Stars Barella. As an Italian center midfielder, he’s not going to provide a ton of unique links, but he’s coming at an interesting time as some high-level Serie A teams are most likely changing a bit right now. Of course, none of that really matters unless Barella is worth using, so let’s talk about that first.

Chemistry Style Recommendation: You can go with Sentinel to boost the strength as much as possible, or you can just go with an Engine and give him a little more boost on offense.

Quick Analysis: At first glance, Barella checks off a lot of boxes you like to see in a defensive-minded midfielder. He has high defensive work rates with medium defensive work rates. He’s 5-foot-9, which is more positive than negative this year. He has high aggression, composure, passing and balance attributes. The strength is the big issue here because it’s just 66, but I think this problem is overstated. I say that because we have players like Kante and Allan who have been used a ton this year, and they’re stronger than Barella, but they’re not monsters. Kante really stands out here because he’s three inches shorter than Barella and only has a marginal boost to strength.

If you look beyond the strength, which will hurt him a bit in physical on-ball battles, he’s got very good balance, aggression and interceptions to mitigate these problems. His interceptions means he’s already going to be near the ball before you click on, and the high aggression means he’s going to maximize his strength rating because he’s going to try and grit out 50-50 wins on the ball no matter what.

As an Italian midfielder in Serie A, he’s not opening up anything new and exciting, but it also means he’s very easy to green link in that league. It would be more ideal if he were on Napoli or fake Juventus, but the point is he’s not a struggle to get into lineups. He’s also much more nimble on ball than most defensive-minded midfielders you will see. His pace isn’t top-tier crazy, but he’s small and will do great in tight spaces, which really plays nicely with his strong passing and composure numbers.

All in all, he’s priced right for what you’re getting, and I think he’s worth pursuing whether or not you also have your eyes on Future Stars Tonali. In addition, if you just do one card this weekend, I would do this one over Player Moments Upamecano.

FIFA 20 FUT: Player Moments Upamecano Now Has Best Pace for a CB in the Bundesliga
FIFA 20 FUT: Is Player of the Month Courtois Too Tall?