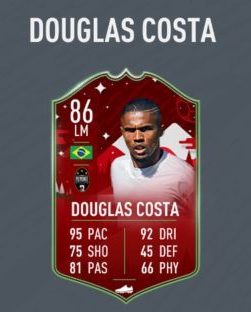 On day three of FUTMAS, we got players with higher overall ratings than on day two, but the value did not increase. You’re still going to have to pay a premium to finish these player SBCs, and unlike yesterday, I don’t even think I can make a somewhat valid case for one of the players like I did with Malcuit.

Fekir has a 200K price tag attached to his challenge. The appeal of his card is the same as the base gold version in that there’s not a lot of attacking midfielders who are French in La Liga. His defense is terrible so it’s hard to say he should be your full link at CM to a Benzema, Griezmann, Umtiti, Gameiro, Varane, Dembele combo of sorts. However, linking to the forwards at the very least is the point of this card.

Fekir has four-star skills and a three-star weak foot. He has medium defensive work rates and high attacking work rates. For traits, he gets chip shot, flair, finesse shot, outside foot shot and power free kick.

On top of the base gold, he does have an 86 overall in-form that does see some play, and it goes for about 25K at right midfielder. Fekir should be at worst someone you use if you’re tired of Griezmann because I think Griezmann is actually overrated this year. However, the cost is silly and hurts the chances of that happening.

It’s a bummer about the price because the +3 in overall is relatively big here because you get a player who works even before his chemistry style as a long-distance shooter with good passing and good enough pace. He links to some very meta players, and it’s just one of those things where the FIFA developers did not properly calculate his cost versus the cost of his base gold — or even his in-form card. 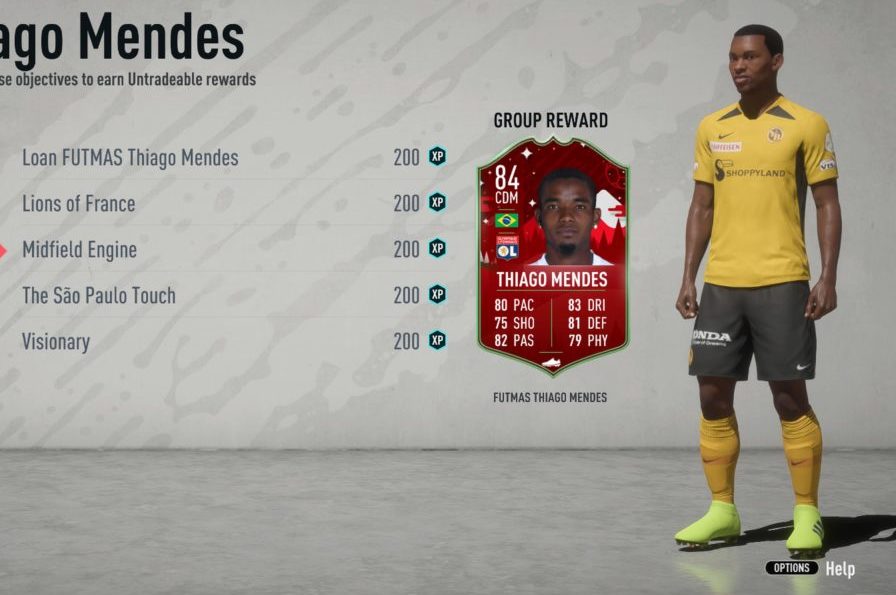 The player objectives for Thiago Mendes I have outlined here.

Mendes has four-star skills and a three-star weak foot. He has medium defensive work rates and high attacking work rates. His base gold is an 81 overall, so this is +2 pace, +5 shooting, +4 passing, +4 dribbling, +4 defense and +5 physical. His base gold is about 1K, and he does not really get used right now because there are still better CDM options in Ligue 1. Those options include Gueye and Verratti.

I still don’t think this FUTMAS version of Mendes outdoes even the standard gold 86 overall Verratti, because while this one appears to have a major pace advantage over Verratti, it’s actually a little misleading. The issue with Mendes is his 81 agility and 77 balance can’t compete with Verratti’s 91 agility and 94 balance. The appeal of Mendes is more that he’s a little more of a ball hawk than Verratti, and that does help get amplified by his clear sprint speed and acceleration advantage as well.

That being said, I think this card is just okay. It’s “free” in that you just need to play the game, and the player objectives are very manageable. But I don’t think this card opens up anything new for you on a Ligue 1 team that was not already there for you to try out already.

So Douglas Costa has a price of about 140K to complete. The appeal of Costa is much like what I talked about with Malcuit yesterday with some of the Serie A links. You get a green link to Allan, and you also get a green link to Alex Sandro or the league SBC Dalbert. He also serves as a link to Dybala and Ronaldo, and overall, with these SBCs you could create a very link-happy Napolo/Brazil squad — with a little faux-Juventus mixed in. With Serie A LM overall, Costa was already tied with Scream Laxalt as the best overall rating LM, and so now the 86 is the best LM/LW beyond in-form Ronaldo.

Costa is five-star skills with a three-star weak foot. He has medium defensive work rates and high attacking work rates. He also has the flair trait.

I don’t think I need to really review this card much more than again mentioning his base gold card is 4K. He’s a very good card as is for an 84 overall, assuming you use him as more of a playmaker than a finisher. You can chemistry style him to decent finishing, but Costa’s appeal is the lightning pace with very good agility and balance to go with five-star skills. He’s incredibly dangerous on the ball, and that doesn’t change here. But I’m not paying 135K more than his base gold for a +2 overall tweak.

It’s a miscalculation on EA’s part to not factor in the price of his base gold before putting together the requirements for this challenge. It seems like creating an algorithm would not be that hard to make sure stuff like this does not happen with your challenge requirements, but I guess that’s not to be here.