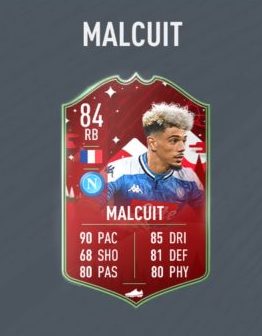 We had a jump in cost from day one to two for these SBCs, but at least in one case it makes sense why that happened. Let’s get to the reviews and discuss the cost argument in the process.

Kevin Malcuit’s FUTMAS card is an 84 overall, which is a +6 jump in overall from his base gold card. In other words, it’s like a whole new card. He has three-star skills, three-star weak foot, medium defensive work rates and high attacking work rates. Those work rates are concerning for some, but they fit with what this card is good at in its base version.

Now, the cost is 125K, which is steep considering you have to trade in a full team of 86 overall players for him. However, if you look at the landscape of Serie A RBs, it’s not a great situation. And if you think about meta Serie A teams, the green links with this card are impressive. You have Allan and Politano who would be full green links, and you also have Koulibaly who becomes a full green link. That’s a big deal, and I believe that’s partly why EA felt the need to boost the cost of this SBC a bit. You can custom tactics your way to green links to be sure, but this simplifies a lot of the guesswork.

As far as who else he’s even competing with for RB in Serie A, it’s pretty much Cuadrado and Season 2 Danilo. Cuadrado is much cheaper than Malcuit, but a lot of people complained about Cuadrado being useless as a RB. I disagreed, and I think my point about Cuadrado being perfectly useful with a chemistry style has held up so far. When stacking up all three, Cuadrado remains the fastest, and overall Malcuit remains the option between Danilo and Cuadrado. He’s faster than Danilo but a worse defender than him. He’s slower than Cuadrado but he’s a better defender than Cuadrado.

That being said, even with the quality links, paying 100K more than Cuadrado for this card is not worth it. I got Malcuit because I do use Serie A a lot, but I fully accept I overpaid. It’s a good card, with a good nationality at a tough-to-find position, but he’s still only an 84 overall and he’s not worth the price of lower-end Icons.

FUTMAS Lukebakio is an 84 overall, which is a +9 in overall from his base gold like Malcuit. He has four-star skills and a four-star weak foot. He has low defensive work rates and medium attacking work rates. Overall, it’s not like the card is bad as he does actually look like a pacey striker with decent finishing skills, but the cost is just so overblown. He also does not fit some massive void like Malcuit does. He’s 6-foot-2 so he’s not some small striker either, nor does he even have ideal work rates. Basically, you’re paying for a card design and that’s about it if you do this SBC.

And I think that’s a shame because Lukebakio is a good player in real life. He’s a solid young striker, and this could have been a good chance to get him recognized by a bigger audience. But there’s no reason to pay low-end Icon prices for an 84 overall player like this.

Overall, it’s a down day for FUTMAS. We only got two player SBCs, and both are just overpriced by varying degrees.