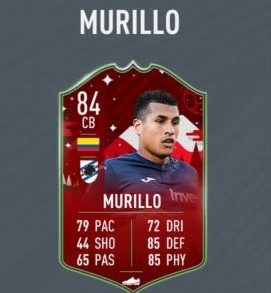 As I said yesterday, it was a light day for FUTMAS, but the two player SBCs provided do at least pique the interest of many folks. Murillo looks like a relatively unique and pacey CB, and Rashford is a popular player who got a somewhat minor upgrade. Let’s dig in a bit more.

Jeison Murillo is the exact type of defender I like using in FIFA this year, so take that into consideration when reading my views on him. He did not get a loan option, so I had to just bite the bullet and pick him up, but I don’t regret it so far. I already had the RB Cuadrado, so this was a good link to that player. I also use Manolas, Juan Jesus and Koulibaly quite a bit so the links were not too bad for me. However, a Colombian in Serie A is overall going to be tough to green link when also factoring in his team.

So why this card is cool is the balance and agility. The increased composure is also great, but he’s a surprisingly nimble 6-foot defender when on-ball. I like my backline to be active, so I think more than ever being able to include your entire team in the play is important this year, and so you can play more aggressive with this sort of defender. I felt like I could take more risks, and I could even push play with Murillo more than I would usually attempt with my CBs. I don’t necessarily recommend people play the way I do, but with FIFA gameplay being sort sloppy and reckless overall this year, I get the most enjoyment just throwing caution to the wind. Sometimes that means I push the pace with my CBs and let my central midfielders get deeper into the attacking zone.

It’s why I said I liked the Cuadrado card, and it’s why I like Murillo. He gives you options, and he’s still quick enough to recover on defense because the 85 strength and 86 standing tackle mean he’s still a good defender. He’s just more versatile than most CBs out there.

At 45-50K, it’s still not a bargain, but I still had untradeable IF/FUT Champs cards so it was cheaper than that price to knock him out.

Thankfully, the loan option is still available for Rashford (PS, the loan option should be a thing for all player SBCs), so I did not need to drop the 275K or so to complete his SBC. I’ve always liked Rashford as he feels a little better than he should be in FIFA games. He was a super popular player early in the year, and it was warranted. He’s also on an extremely popular team in the EPL, so I somewhat understand why EA made him so expensive. That being said, the cost is still overblown.

So at +2 overall compared to his base gold, there are actually some bigger changes than expected for his agility, balance and ball control. He also still has five-star skills with a three-star weak foot, as well as high defensive work rates and high attacking work rates. He also has the team player, flair and power free kick traits. The five-star skills are always nice, and he did feel a little stronger on the ball than I remember with his gold card. He was still burning dudes as well, and overall, he reminded me why he was so meta earlier in the season. The high-high work rates also reminded me why he does not usually make it through full games without needing a substitution.

However, even as I played out his three-game loan, there’s just no way I could see myself paying this much more for FUTMAS Rashford. I like the player, I wouldn’t disagree with someone who wanted to use him, but the value proposition is just too out of whack here for me.