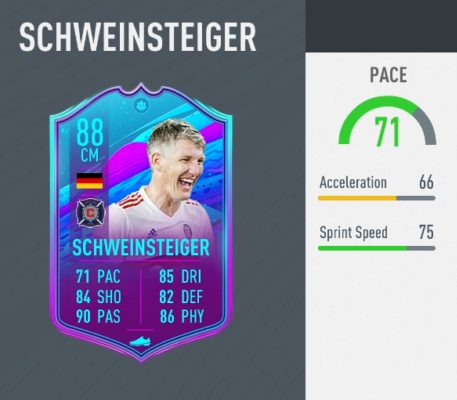 As we continue to get more callbacks to SBCs from earlier this year, Flashback Schweinsteiger returns in the latest headliner for this unspoken promo within FUTMAS. I am happy to welcome back Mr. Calm once more.

I already talked about some people being upset about these SBCs returning and why I disagree with that frustration in a separate post, so I won’t get on my soapbox again. I will simply say this Schweinsteiger card is awesome, and I would be happy to be able to get him for only 60K (if I did not already own him). Overall, this is just a great card to anchor your midfield, and the only real issue is his 64 agility and overall slowness. However, I don’t think he feels that sluggish on the ball even with that flaw.

I also get a kick out of playing with an MLS-centric squad this year because you can put together a real fast squad with some fun players like Scream Ibrahimovic, both MLS League SBC cards (Acosta and Villalba), Nani (five-star skills) and MLS POTM Josef Martinez. It’s not a meta squad or anything, but using Schweinsteiger to hit long balls to your pacey players making runs makes him fit quite snugly on that sort of team. He’s also a great defensive midfielder and can be super dangerous with shots from outside the box.

If you can link him to Germans or Icons (since I know no one else is really using MLS squads), he’s worth getting.

Chong is not worth getting. He was not good when he was first released, and he remains just as bad now. In fact, I don’t think his price is even much cheaper than it was the first time around. His cost is under 20K according to FUTBin, but I still would not bite at that price.

He’s an easy link, but beyond that I just don’t think he has a great place in this FIFA. The 99 agility, 89 attack positioning and 92 shot power are enticing, but the 68 balance and lack of elite pace hurts him at this point.

A very easy FUTMAS Challenge today and the contents are tradeable. Right now, the price is roughly 2.5K to finish this challenge, according to FUTBin.