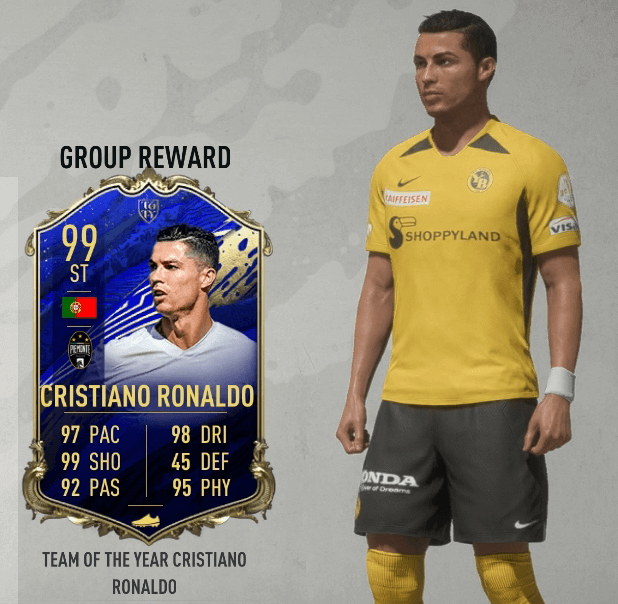 I reviewed the other Team of the Year players in anticipation of this final release, and we now have it. While I voted for Lewandowski, it’s no surprise we get Team of the Year Ronaldo as the fan vote winner. This card is an absolute unit.

The nice part about this is there is a manageable way to get him on a seven-game loan if you want to at least try out Ronaldo.

As of now, Ronaldo’s price is at 6.2 to 7.3 million coins, according to FUTBin. That is quite the investment to make, but that price should come down a pinch in the coming days.

The new Flashback SBC is for Marcelo. The overall price for this card is right around 300K right now.

This feels slightly overpriced just like the Bernardo Silva SBC did, but I don’t think it’s prohibitively expensive. The bigger issue I’m not sure Marcelo really gets into the upper echelon of picks at LB, which may be the actual thing that holds him back a bit.

Team of the Year Ronaldo – Other Challenges

The tough looks continue for these TOTY puzzle SBCs. It continues to be baffling that these packs are untradeable. Again, I can only assume this is happening to avoid extra TOTY cards getting into the marketplace.

Season 4 has also kicked off. I will not get to all of the new content until I do a Season 4 breakdown over the weekend. However, I want to at least post the new Player Moments card: Hakim Ziyech

For those with Ones To Watch Promes, this seems like a nice upgrade to get to link with him. The Ziyech challenges don’t look too bad beyond winning the five games while scoring with Eredivisie players. The lobbed through balls needing to happen in three separate matches is also a bummer because you can’t just finish it out in one game now.

That being said, Ziyech has the two-star weak foot so that might throw some people off. Outside of that, he looks like a great card.