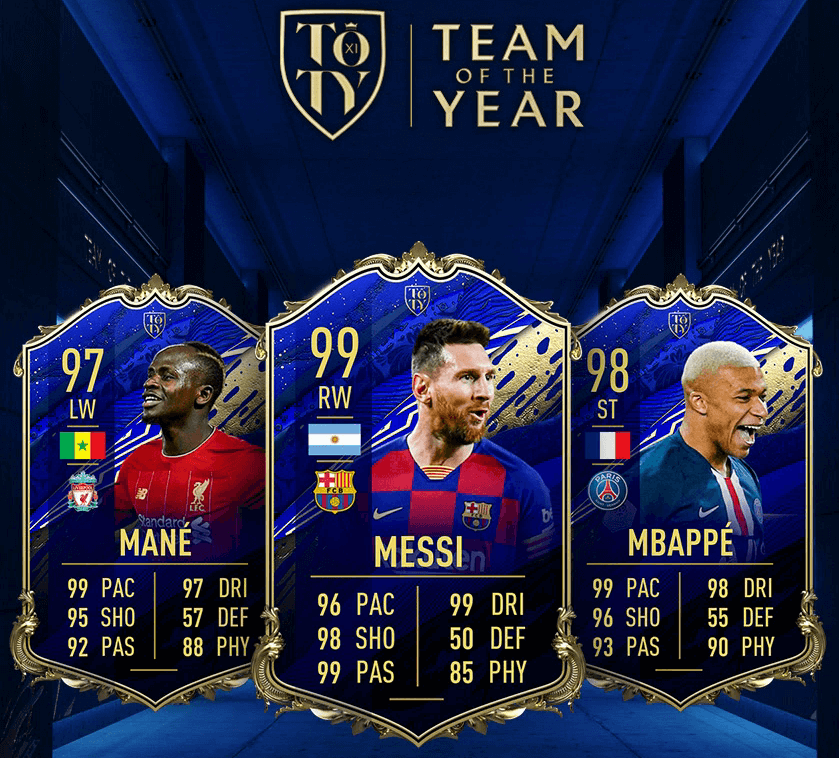 With every player but the fan vote out for TOTY in FIFA 20 FUT, it’s time to go through the positions and take a closer look at the cards. First up, here’s some analysis for the Team of the Year attackers.

Chemistry Style Recommendation: It’s mostly irrelevant, but I would do an Anchor to just make him that much stronger and help out his ability to get the ball back if you turn it over.

Lionel Messi’s cost has settled in at about 5-6 million coins, according to FUTBin. I don’t think I need to even really go over the merits of this card, or even what he’s good at. He’s a 99 overall, and it’s crystal clear why he’s great. He would be meta in any game, and it’s really just the extras that are not as “great” as they could be. He has four-star skills and a four-star weak foot, and he has low defensive work rates to go with medium attacking work rates. Those don’t change between cards, and it’s the “weakness” you have to live with on Messi cards.

It’s interesting to think about how you want to play this out if you truly want a Messi card. I think with most of these TOTY cards, you need to take the value proposition into account and figure out if the added stats are truly worth it. With that in mind, Messi cards are all the same to me at this point. He’s amazing on the ball. He will make great runs. He will cut on a dime. And he will not finish quite as well as you expect. I think you can get most of the value of Messi from the SBC if you already did it, or simply put an Anchor or Hunter on his base gold card and save tons of extra coins.

Mbappe is also going for 5-6 million coins like Messi, and I think in many regards Mbappe is the better value between the two. Going from the base gold to this card, you do get hugely tangible changes on things that go beyond the obvious pace that is there on all his cards. Passing, shooting and physical traits all become elite, and he’s the scariest player to go up against to me in this game with all these things going for him.

He also maintains the very good extras. He has five-star skills, a four-star weak foot, low defensive work rates and high attacking work rates. He’s a fantastic striker, and you can even drop him back into a CAM role if you want in this form.

All that being said, this card also makes his base gold card as affordable as it has ever been, so this may be the chance for you to get an Mbappe if you have not been able to use him yet this season.

Mane is sitting around 2.4-2.6 million coins right now. His POTM SBC remains active as well so all versions of his card are currently available. The clear comparison is to TOTY Mbappe, and I think that’s fair. Mane is a winger, but you can obviously game plan him into the center of the field if you’d like him there instead.

He has four-star skills and a four-star weak foot, and then has medium defensive work rates to go with high attacking work rates. Those are not as good as Mbappe’s extras, but otherwise the cards are similar. Mane is generally not as stout on the ball as Mbappe, so that is something else to consider. I do think this card is undervalued right now, but I get why he’s not getting the same traction as Mbappe and Messi.

Nevertheless, this card is a very real upgrade over his base gold card, and I think it’s like Mbappe where I can get behind eating the cost to upgrade to him.