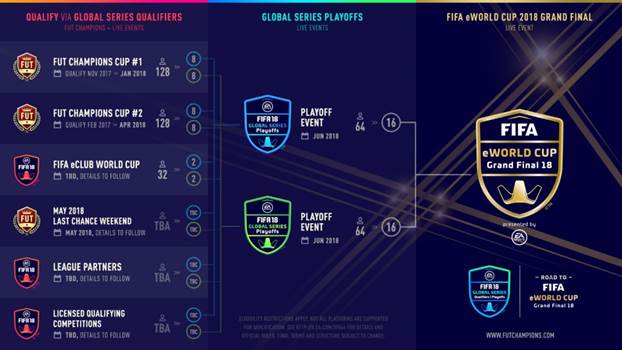 Today, EA SPORTS and FIFA announced the launch of the EA SPORTS FIFA 18 Global Series on The Road to the FIFA eWorld Cup 2018, the largest gaming competition in FIFA history. The new landmark competition will expand the global competitive audience and feature top-flight football leagues and football clubs around the world.

The Road to the FIFA eWorld Cup 2018 includes the new EA SPORTS FIFA 18 Global Series, a qualification journey open to players and spectators around the world, an important expansion to last year’s competition that magnifies the ways competitors of all levels can compete through both online competition and at inimitable, industry-moving live events.

As players progress through the various levels (see below), they’ll compete for a place at the ultimate showdown, the FIFA eWorld Cup 2018, in August. The resulting winner will be named the undisputed world champion of EA SPORTS FIFA 18, the world’s game.