It has been more than half a decade since EA had to call it quits on its NCAA video game. We all know the reasons why things fell apart, but there has been an astronomical hole left behind by the loss of one of the best sports games in recent memory. And although several games have tried to replicate the nostalgia we continue to search for, nothing has ever come close.

I did a review of Doug Flutie’s Maximum Football late last year. The game had some ups and downs, and ultimately I wanted a little more out of it. Enter Wolverine Studios and its text-based simulation Draft Day Sports: College Football 2020. Text-based games are a different breed and don’t appeal to everyone. However, if you’re looking for a casual fix that can give you everything you’ve long yearned for since NCAA Football folded, this is the game.

A lot of the things I enjoyed with Draft Day Sports: Pro Football 2020, could mostly be “copy and pasted” into this review. The gameplay is excellent, and the playbooks are fun and diverse. I never find myself wanting more from them, and in a text-based sim game, that’s all I can ask for from a video game. There are three game modes: career, multiplayer and soap box. For this review, I chose a career with computer-generated rosters.

Next, you must create a coach and this gives you a ton of options for customizing your character. Once you have finished creating your coach, it’s time to pick a school and get started on the road to building a dynasty. Since I’m a fan of South Florida sports, I decided to choose the Miami Typhoons.

As you would expect with a text-based game, the graphics are not going to be anything like what you’ve become accustomed to playing. Plays can be selected with a simple drop-down box, and once you pick your desired match, the screen shows 22 little circles acting out the animation. Ratings impact the game more than human control (obviously), and at times, you might wish you could pick up the controller and take over. But that is the glory of things.

Recruitment, which is the core of any college football game, is done rather well. It’s not perfect, and you may still watch as your top-recruit that you’ve spent the entire season scouting decides to leave last minute for a more significant, better program, but that’s all part of the lore of college football. Overall though, I think Wolverine Studios does a great job of capturing the essence of the sport and keeps things remaining fresh throughout your dynasty run. 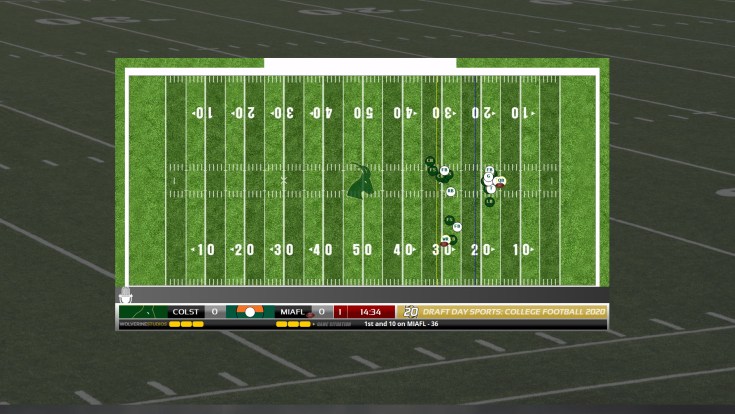 Users now have the capability to export draft classes. So, if you’re someone who enjoys playing Draft Day Sports: Pro Football 2020, now you can import prospects from one game to the other. This will be much more dynamic once real-life draft prospects are added to the game via a mod. Nevertheless, it’s nice to watch small recruits grow from promising young high school football players to college superstars, and into the pros.

The replay value was a strong suit of Pro Football 2020 and the same holds true in this installment. A lot of this not only has to do with how extensive the gameplay is, but also how difficult it can be at times. You’re not going to build a powerhouse overnight, and until you finally reach the top of the mountain, you will continue to strive for a national title.

After each season, you will have the opportunity to move on to a different school. These schools are looking to hire the next great head coach and so it’s fun to be able to bounce around if you want. This helps keep the game fresh because it creates an entirely different dynamic.

Admittedly, I’m not the most competent of gamers, but I did try do find a NCAA roster mod with very little luck. This may be because the game is extremely new, and internet folks have not yet knocked out a roster yet. But once real-life rosters hit the market, I think that could help keep casual fans interested. After all, it’s just not the same to see Russ Song as the Typhoons’ (Hurricanes) quarterback taking the league by storm — when they have such a promising star in transfer D’Eriq King. Once we get a modded NCAA roster, the sky is the limit. And as I mentioned earlier, having the capability to import prospects into Wolverine’s pro football simulation would be an absolute game changer.

Much like Pro Football 2020, there’s a lot to do in Draft Day Sports: College Football 2020 and I find myself struggling to navigate from one screen to the next. This might be one of the cons with having a game so intricate, and it’s something that I’ve noticed when playing Draft Day Pro Football. I sometimes have a screen opened and struggle to close it to move on to the next one. Other times, I found myself clicking around aimlessly trying to finish tasks, check emails and recruit top prospects.

Quite honestly, maybe it’s just a personal issue I have with the game and something other people will not notice.

Much like its older brother, Draft Day Sports: College Football 2020 is as in-depth as you would imagine — from the recruiting to the difficulty of trying to build a dynasty and everything in between. In the end, this is a text-based simulation that won’t appeal to the casual sports gamer. But if you want a game that you can come back to again and again and not feel like you’ve missed anything, Draft Day Sports: College Football 2020 is the game for you. It’s fun, immersive and best of all it’s a college football game in a market devoid of a real NCAA powerhouse. It won’t be the best football game you play this year, but it certainly won’t be the worst.

AO Tennis 2 Review: Another Step Towards the Grand Slam
MLB The Show 20 Review: A Worthy Sendoff For This Generation