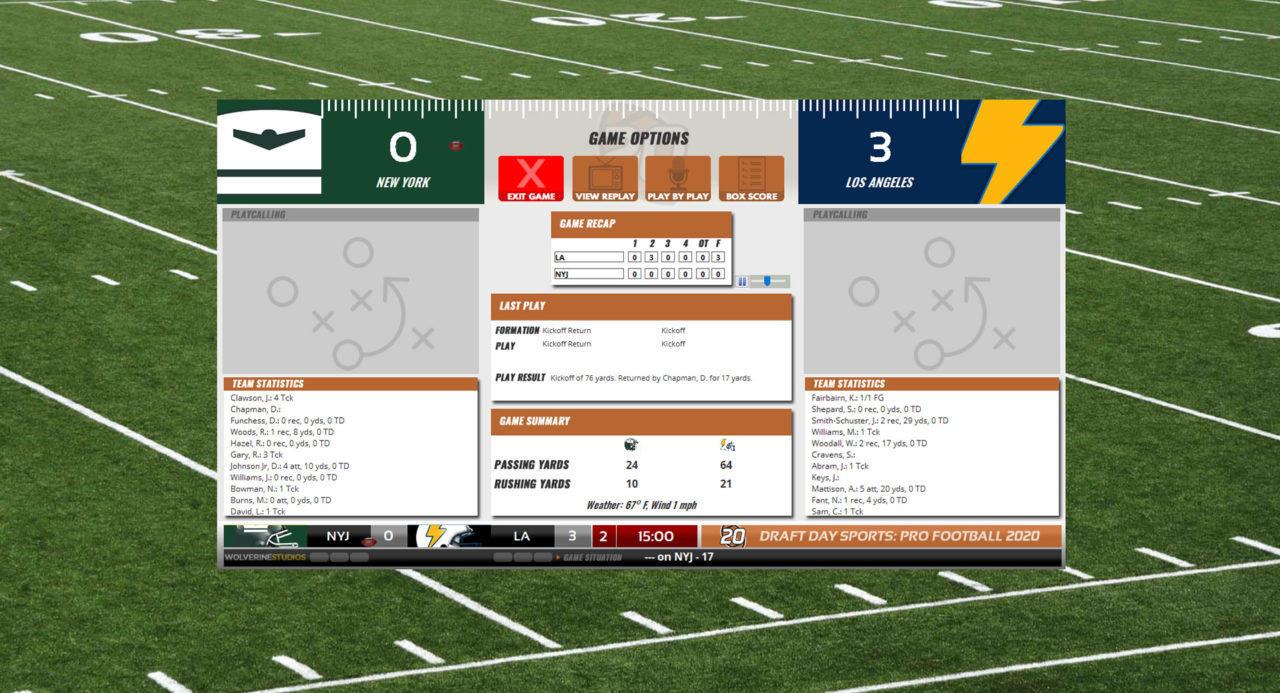 Due to EA’s exclusive license with the NFL, there are very few alternatives for gamers to satisfy their football cravings. And while we anxiously await for the arrival of Doug Flutie’s Maximum Football, a potential XFL game or a brand new installment of NCAA Football, there’s not a ton of hope for the future. Unless, of course, you enjoy playing text-based, simulation-style football. In which case, there are plenty of options readily available.

And no company is more involved in the text-based sports gaming world than Wolverine Studios. Founded in May 2006 by Gary Gorski, he and his group of developers continue to provide the industry with some of the top sports games in an up and coming genre. This is especially true with their football simulation, Pro Football 2020, which offers fans of the sport a unique and immersive way to build a football franchise from the ground up. This is a completely different game than Madden, but can Draft Day hold its own and capture my attention? 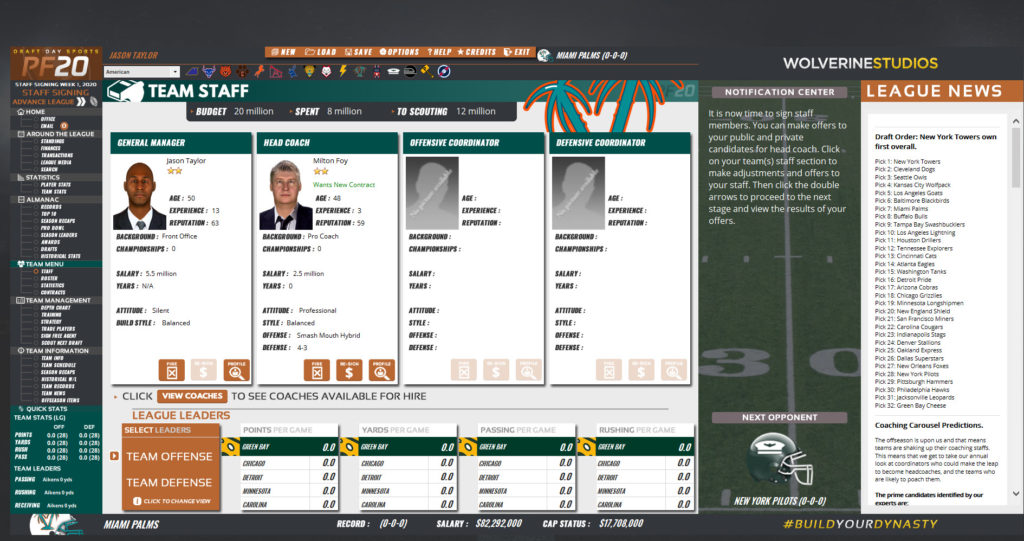 There’s plenty to like about Draft Day: Pro Football 2020 that separates itself from the rest of the market. And at the top of that list is the customization options in this year’s game. First, gamers will be asked to choose between three game modes: career, multiplayer and Sandbox. Multiplayer allows you to play online with other users, while Sandbox gives you full control over as many teams as you desire. For this review, I mostly stuck to the traditional career mode, and it did not disappoint.

As soon as you begin your franchise, that is where the plethora of customization options become apparent. No one can complain that Wolverine’s football installment doesn’t give you a variety of options when beginning a franchise. And whether it be choosing the rosters you would prefer to play with (current, custom, historic, etc.), game settings or everything in between, you are given every opportunity to build this league your way.

Next, you will have the option to choose between creating a college coach, player or general manager (front office). By choosing general manager, you will have complete control over the roster. This gives you the option to build the roster in your vision, in addition to the coaching staff, which includes positional coordinators. Furthermore, you will have the ability to choose how your character looks. This is where you start to see the difference between this and other text-based sports titles. Pro Football 2020 gives you plenty of options to build your character and dress them in a variety of different ways. You will also have the opportunity to customize the way your team looks and plays on the field. Lastly, player pictures are randomly generated and can be good for several laughs throughout the season.

This goes hand in hand with the customization to an extent, but for a simulation-style text-based game, Draft Day does the game of football better than most. New this year is a custom play builder. This also gives users the ability to create your own playbook using different formations and schemes, in addition to personnel. Gamers are also given the ability to make more coaching decisions than ever before. Also added this year is the ability to implement a number of new strategies on both offense and defense. You can now man align on defense and game plan specific tendencies on defense. 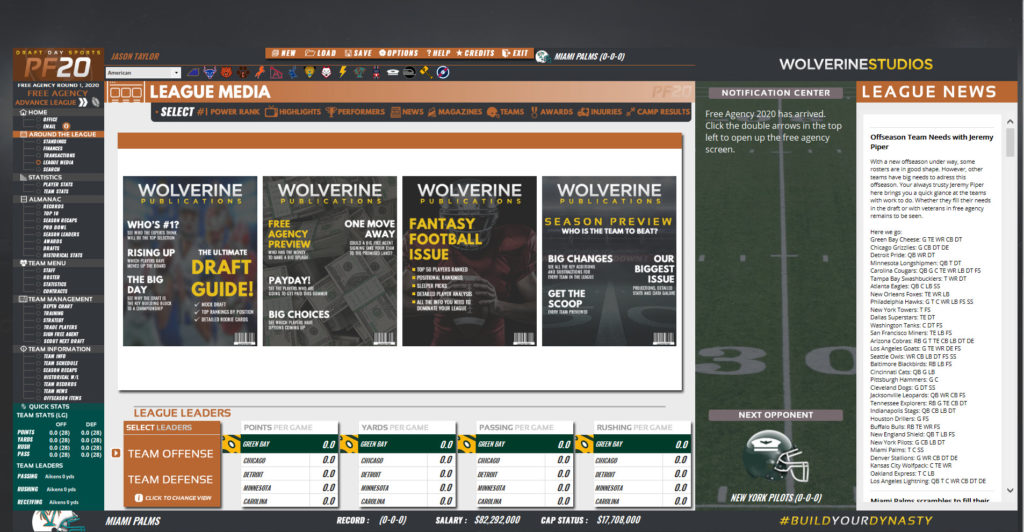 Games can often feel old and repetitive after several playthroughs. This, however, is not the case with DDPF 2020. In fact, it’s quite the opposite. Building a franchise takes time, and although you have every opportunity to simulate multiple seasons at the click of a button, you might find yourself more inclined to watch your franchise play out in real-time. This is because Wolverine has added plenty of little things to keep people immersed. Newspaper and magazine articles add an old-school Madden feel to franchise mode. And a lot of your time will be spent getting deeper and deeper entrenched into the league. End of the season awards are fun, and the carryover from one season to another gives users added incentive to continue where they left off.

When it comes to text-based video games, there’s not a lot that can be done from a graphical standpoint. And although the different options to create your future GM or head coach is rather in-depth, there’s still plenty left to be desired. That doesn’t mean this isn’t one of the best 2-D football games on the market, because it is. Regardless, your jaw probably won’t hit the floor as you page through the yearly awards, player stats or character models.

Additionally, menus can look cluttered at times, and for a new fan of the franchise it can become muddled and frustrating to say the least. For example, opening up a tab to view your depth chart or a potential free agent signing can become lost in the rest of the background. This is by no means a deal breaker, but it’s something that could be addressed in the future with a blur effect or by darkening the menus in the background. 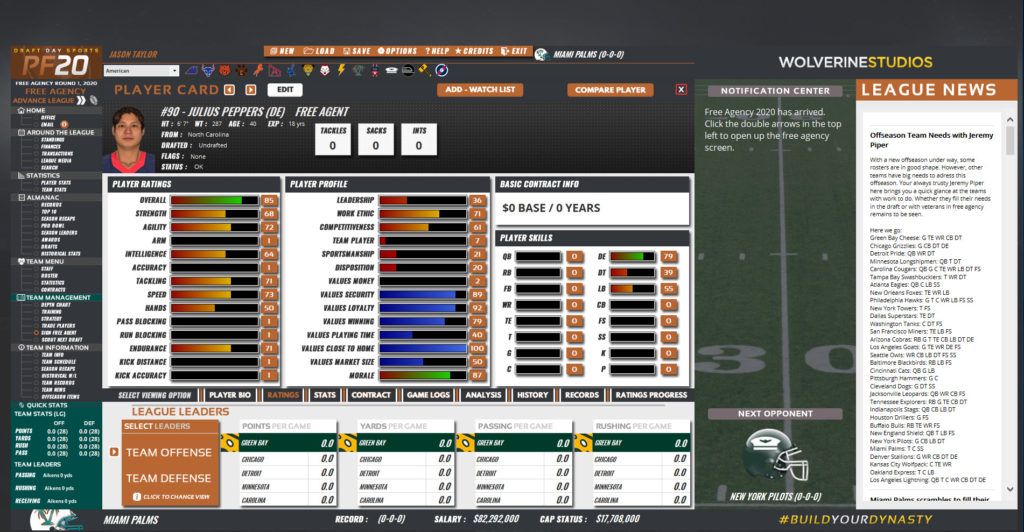 With the variety of different options at your disposal, there’s obviously going to be a learning curve. For starters, understanding where everything is located can be a challenge all on its own. Couple that with all the different nuances and intricate details, and it may not appeal to the casual gamer. Sure, this isn’t necessarily a bad thing, but it can come off as a bit much for users who just want a straight forward experience. Most of this can be avoided by choosing to become a coach or player, but it’s not really the ideal way to play the game.

In the end, this is one of the most in-depth and immersive football video games on the market. And although there are no exclusive licenses, the game really does set itself apart from the rest of the pack. Having the ability to build a franchise from the ground up, while watching everything around the league unfold, is truly a breath of fresh air. In fact, one can only hope that Madden takes notice because adding even half the detail Wolverine Studios has here would really help that franchise mode. When it comes to text-based sports video games, it’s hard to find one that can keep me coming back again and again. Pro Football 2020 does this and so much more.