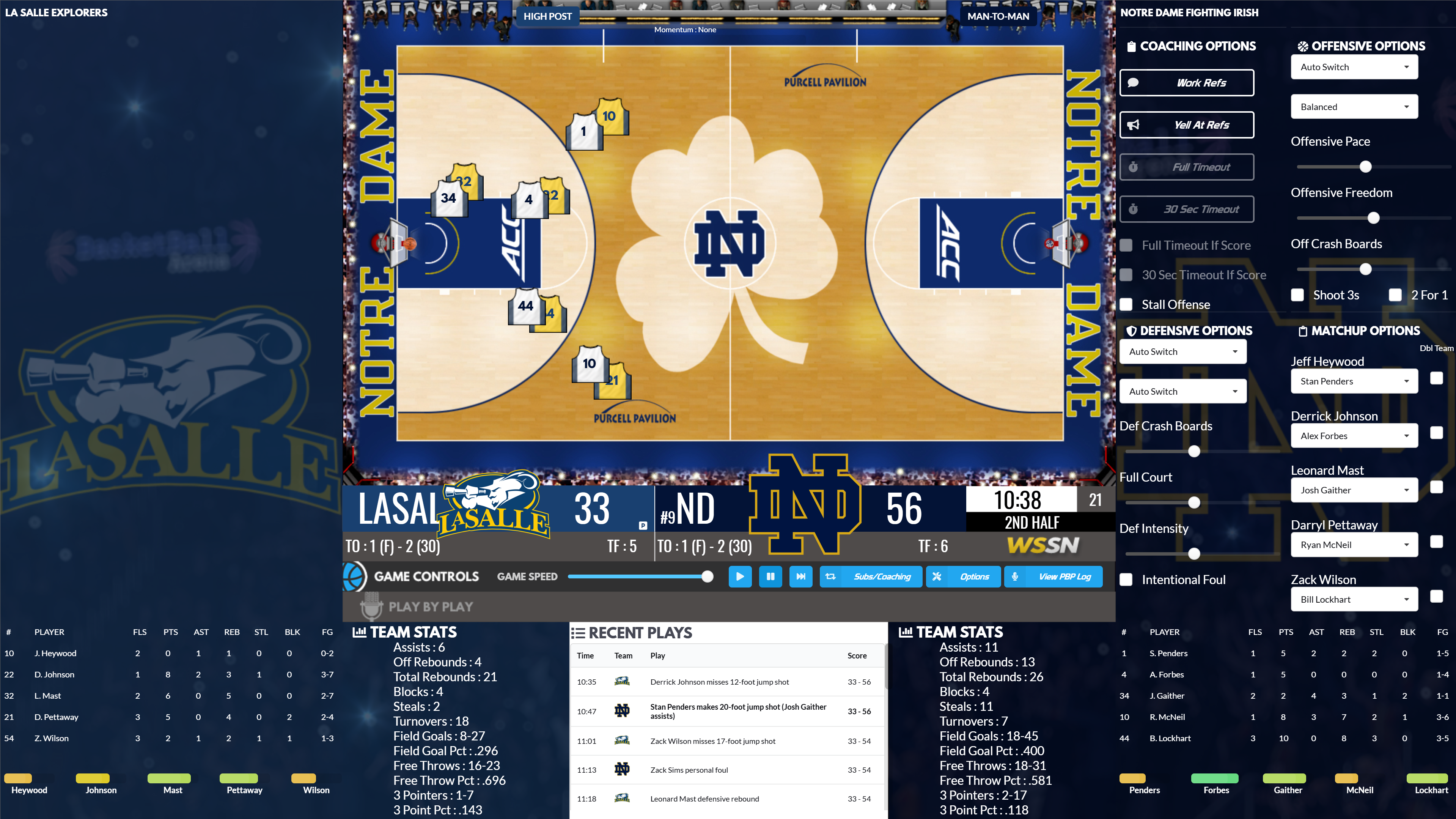 Wolverine Studios has done a solid job of positioning itself near the top of the simulation scene for a couple years now. Some of the studio’s offerings have helped fill the void where sports titles do not exist due to licensing or legality issues. This is no more true than with the Draft Day Sports: College Basketball franchise, and so that’s why it has been nice to play the Early Access 2021 version for review as of late.

As many of us wait for this year’s version of March Madness, Wolverine Studios has stepped up and delivered an opportunity to take control and guide a team in the role of a college basketball coach or league commissioner. So, what’s new in DDS: CBB ’21? 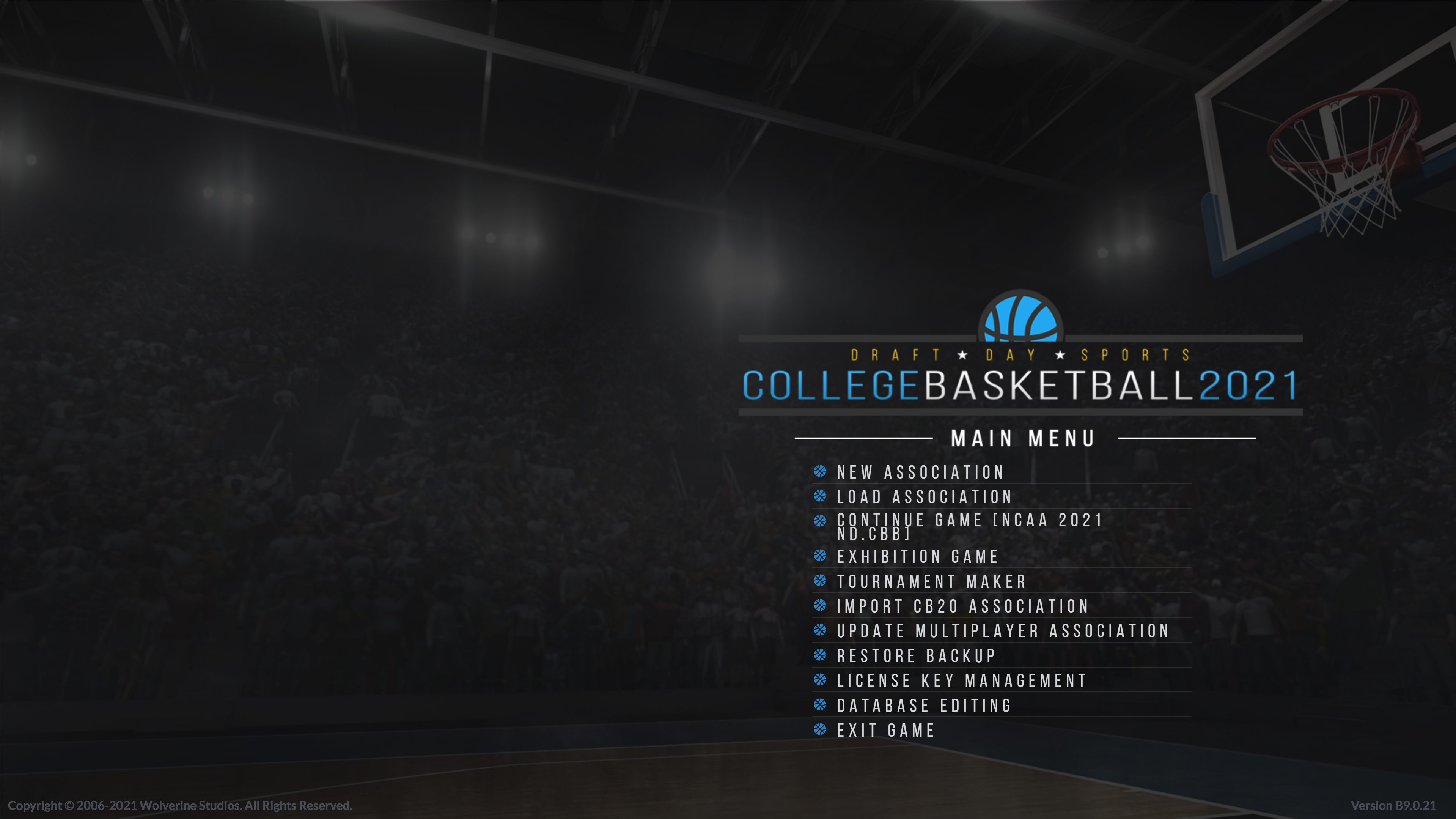 According to Wolverine Studios:

-Brand new realistic enhancements like the NET Quadrant system to determine who makes the postseason tournaments make the game feel even more true to life.

-Recruiting upgrades allow you to recruit directly from the revamped player card, see more information on the interest level of your school, and new recruiting filters make it even easier to target your favorite recruits.

-A host of new page additions such as the redesigned dashboard screen, new schedule screens, improved ways of selecting simulation times, game-by-game updates while simulating, and changes to the strategy screen to display team proficiencies make the game even easier to navigate and use.

-Customize it all! Do the editing yourself with our new database editor to change team and conference names, change logos, courts, and much more or check out the community-created mods to really enhance your gaming experience.

-The game engine has received multiple improvements as well. New changes have been made to the 2D screen for a better experience there including extra popups when players have great games and changes to the simulation engine itself allow for better players at smaller schools to be more impactful on the stat lines and play an outsized role for their team in some cases just as they do in real life.

-Link your league with Draft Day Sports: Pro Basketball 2021 for a totally immersive game universe. Automatically transfer your draft-eligible players to DDS: PB ‘21 and you can track standings, stats, and rosters from your college world right inside of DDS: PB ‘21 now!

In Wolverine’s DDS: CBB 21, you don’t just sit back and watch the action unfold and let the pieces fall where they may — although that is an approach you can take if you want. Much like real college basketball, there is an ebb and flow to each game and each season, and many factors will play a part in how the action on-court and off play out.

Before each matchup, your assistant coaches will deliver a scouting report on the team at hand, and that report will detail what your opponent likes to do on both ends of the court. The next move is to adjust your game plan for that opponent to create the best possible matchups on the court and the best overall approach for the game.

Once in-game and all the pregame decisions have been made, it’s time to see how your team performs. In many cases, it will perform exactly as you had hoped. In other cases, I watched my team under or overperform, and that’s where I had to step in, especially during an underperformance.

The game provides each digital coach tools that, in theory, allow the coach to have an impact on the game from the sidelines. Some of these tools include voicing your opinion to referees that are doing the game, while others allow you to change the tempo, adjust the game’s offensive and defensive approach, sub in a specialty player, or call a needed timeout.

Because each game differs in so many ways, I never really knew how big of an impact I actually had on the outcome of the game, but it often felt like the more effort I delivered, the bigger the impact. 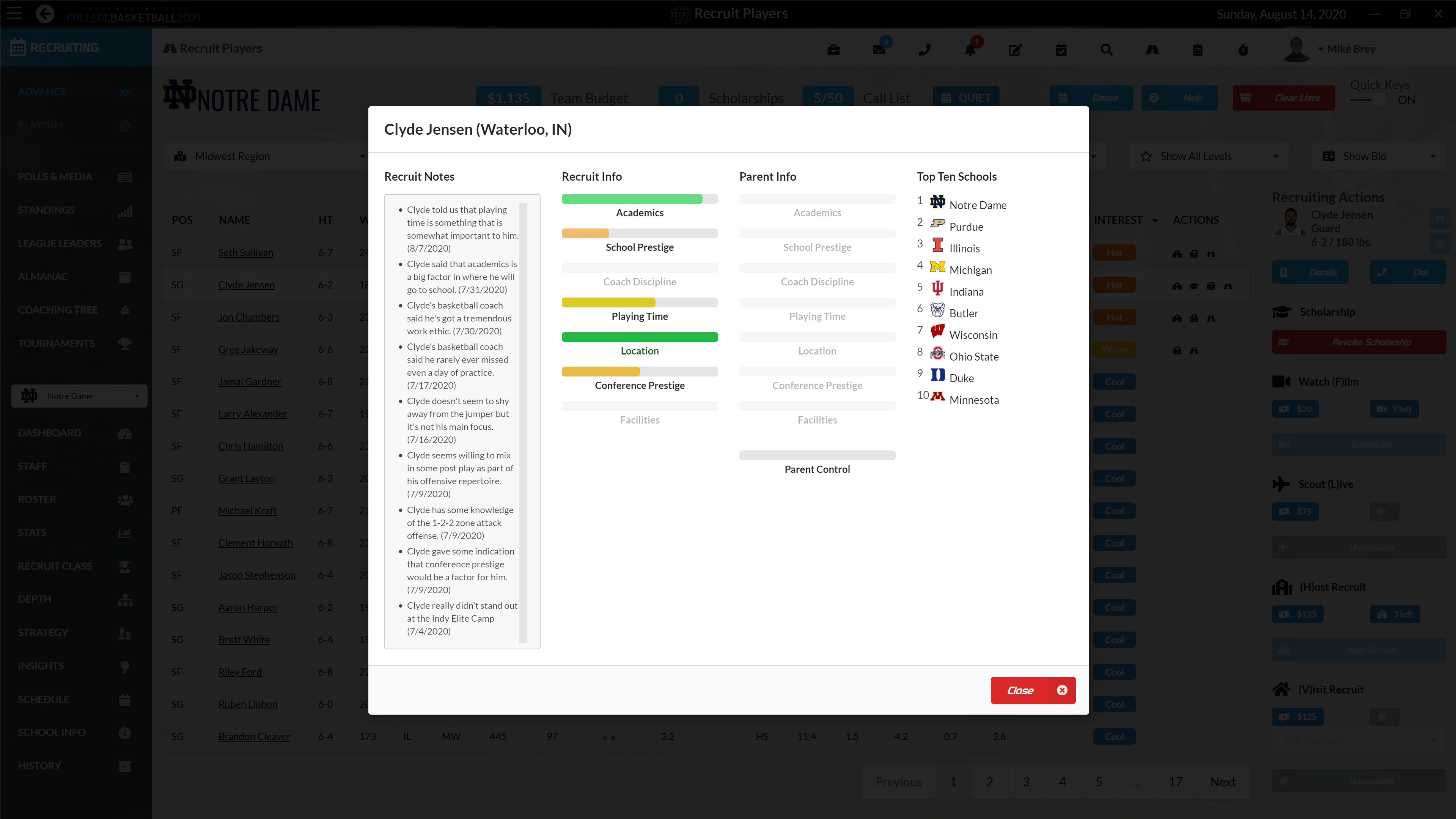 Recruiting in DDS: CBB ’21 is one area that really shined. The way the recruiting process is implemented is simple enough for any newcomer to grasp and utilize, but deep enough that you can spend hours getting lost in the sea of information readily available.

As the coach, you can attend certain camps throughout the offseason and watch prospective players display their game on the courts. Once those camps are attended and over, you will receive feedback to decide if there are players worth adding to your big board of recruits.

Once all the information has been accumulated, it’s time to go to work as a head coach. You can view all the recruits, but some will have more information available based on your approach.

Each school has a budget to spend on recruitment and travel. You decide how you want to spend that budget, whether it’s on travel or recruiting breakdowns. Once the funds are used up, there is no more and the information that you have acquired is what you have.

After the recruitment period starts, you arrange the potential recruits in any order you want, and you can see where you are in terms of grabbing that ever-so-important “letter of intent” from them.

Now, not everything is so black and white in terms of recruiting. You must devote time, money, and travel to get the attention of a recruit. There are many factors that weigh in on the recruit’s decision — some legal, some not — and it is up to you to determine how much energy, effort, and how far you are willing to push the envelope to secure that commitment.

The most important aspect here is you can have a very hands-on approach or defer the responsibility to the AI coaches and let them do all the recruiting and work for you. 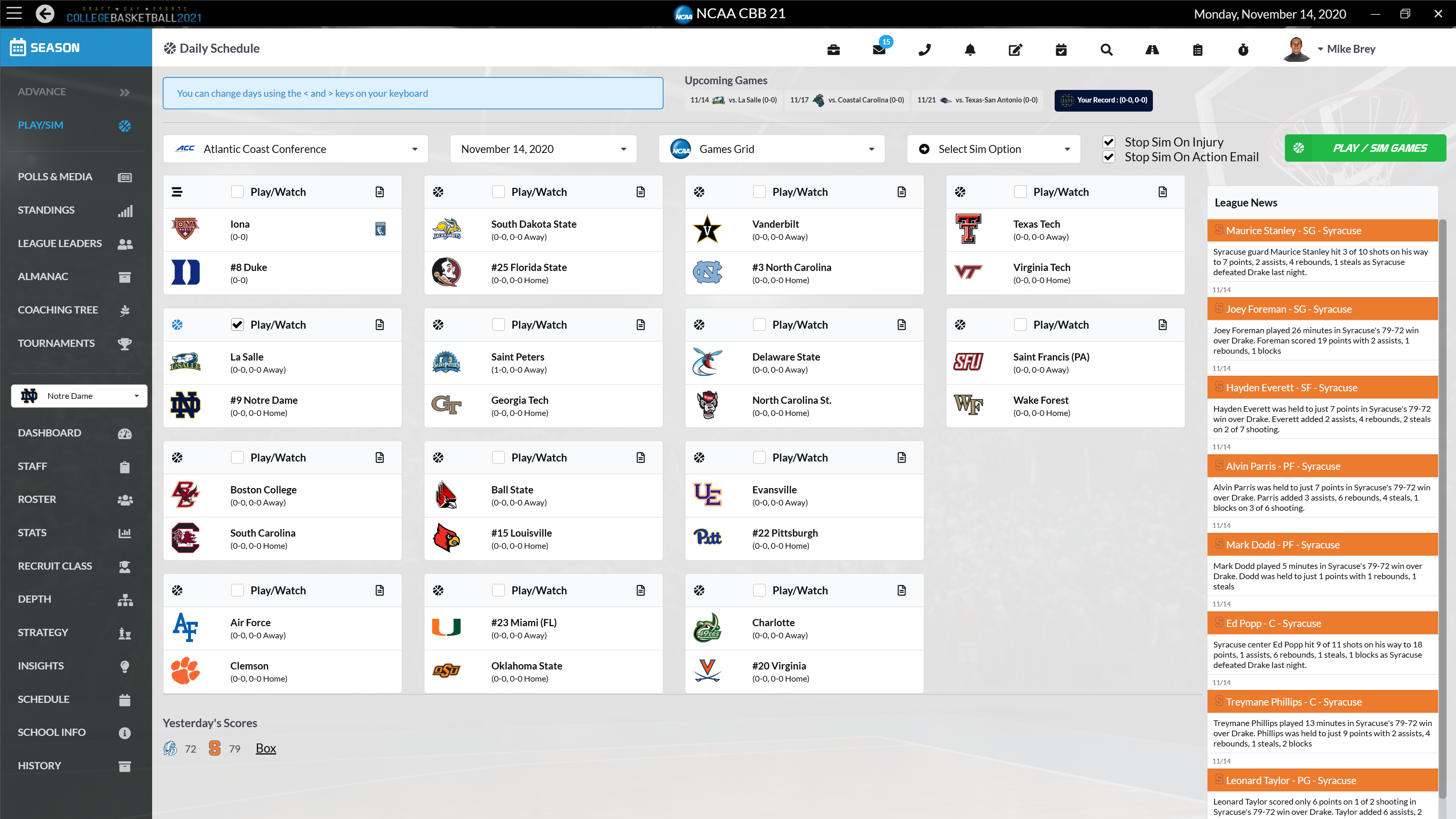 Some of the simulation titles that Wolverine has in its arsenal of sports games struggle occasionally with simulations if you look at them from a real-world perspective. DDS: CBB ’21 is not one of those titles that struggles nearly as much. I witnessed weekly and yearly results that included the occasional upset but adhered to the normality of college basketball. This is especially impressive to see in its early access state.

Not only did the simulated results play out and perform well during the regular season, but they also delivered consistently solid results in postseason activities. The sim engine also did a solid job of focusing on the best players when it came to per game and seasonal aggregated stats. 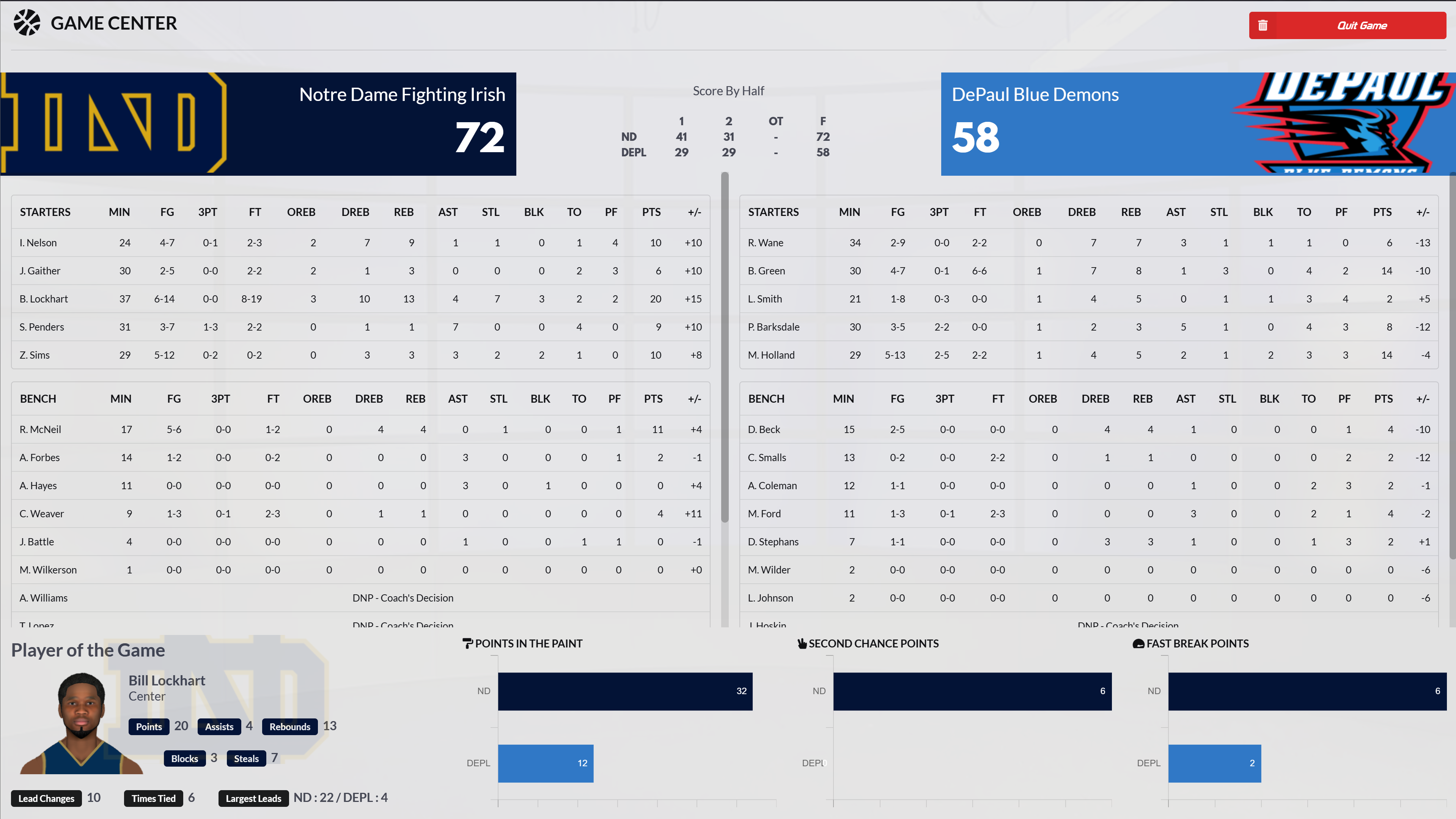 Although the simulation results were consistently solid, there were some strange occurrences that took place when the new national coach and media polls came out each week. In my multiple efforts at running different styles of franchises and careers, the oddities happened enough for me to notice.

So, setting the stage here, seeing where my team ranked at the end of each week was oddly satisfying, and one of the weekly moments I looked forward to the most. However, as the season(s) progressed, I noticed that my team and others would tend to move erratically in the polls in a fashion that I could apply no reasoning to.

For example, coaching at Notre Dame, we were ranked #9 in the nation and had just beaten San Jose State by 34 points on the road. Without any abnormalities taking place in the polls around me, I found my team dropping to a new ranking of #14 after a big win on the road, and a win that saw my team improve to 5-1 on the year.

It wasn’t just my team that was impacted by the odd poll placements either. I saw teams that had name recognition but were ranked in the top 10 while showcasing a record of 1-4.

I know this may seem like a minor grievance, especially after the developers have revamped the visual on-screen experience, but it’s a grievance nevertheless. When playing a game inside Wolverine’s DDS: CBB ’21, it displays in a 2-D format with a centered screen and micro-uniform tops moving about the court that represents each player.

While it works fine and at least gives the user a chance to see the game unfold, I still hold out hope that one day we will get a full court with miniature players moving about the court that meshes well with the text-based action being displayed on the side bar.

If Wolverine could somehow figure out an experience that mimics something like Pro Strategy Football, it could take the franchise to the next level. It could also push the game closer to what many people are craving when it comes to games like Madden, NCAA, and 2K’s football offerings.

Wolverine Studios has delivered one of the best simulation/strategy games that I have ever played. Is it perfect? No, but the ability to submerge yourself in multiple worlds of college basketball — some real, some fictitious — is an overall awesome experience.

There are some minor details that hold it back just a bit, but nothing that takes me out of the moment. On top of that, it’s still in early access, and Wolverine Studios generally does a good job of supporting its titles after launch.

Draft Day Sports: College Basketball 2021 is a title that can be enjoyed by newcomers and veterans. You can really go deep into the world of college basketball, or simply enjoy the superficialities of it all.