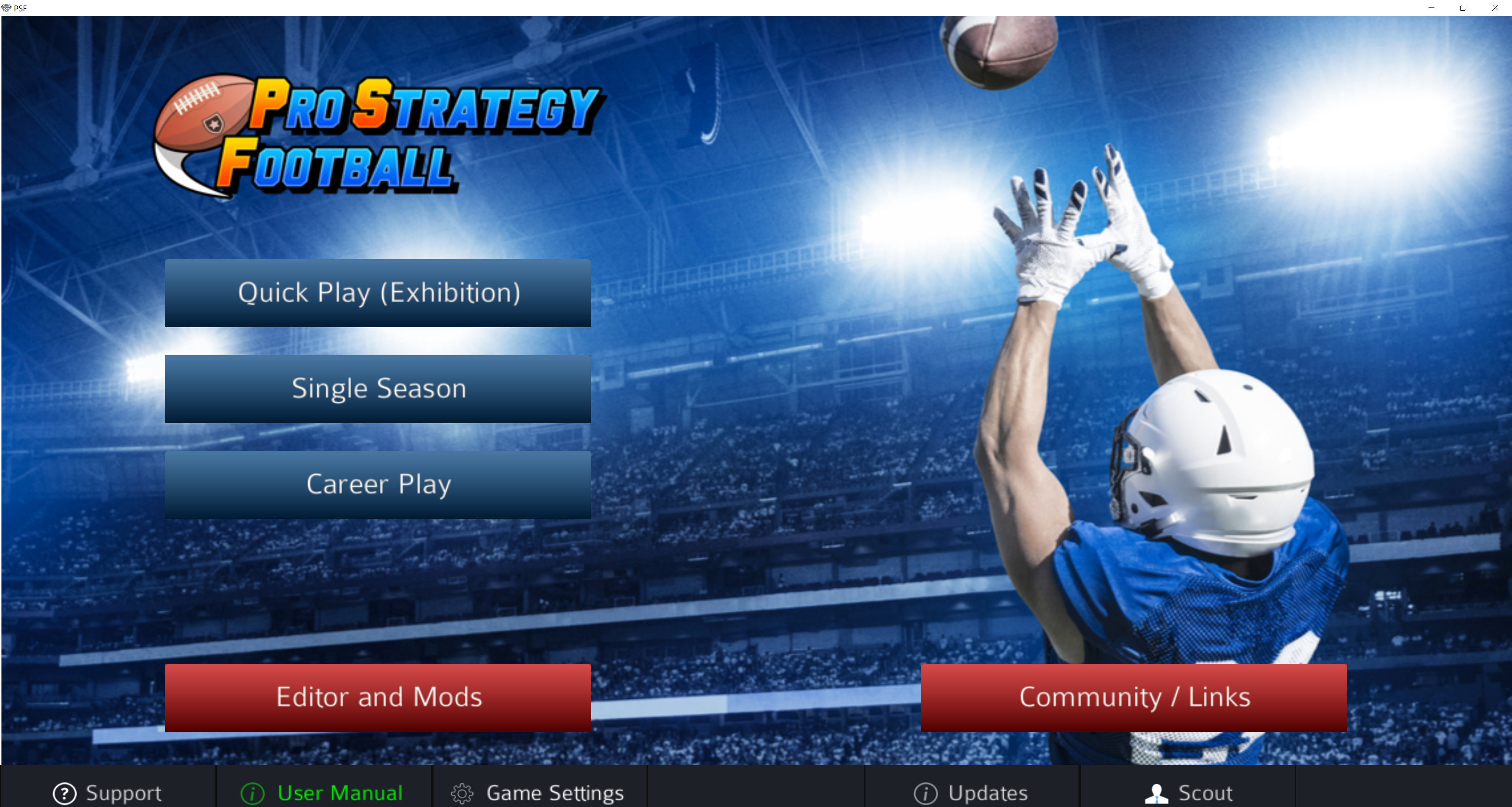 There has been an obvious trend in the world of football video games as of late with EA holding the exclusive NFL license. That trend includes independent developers and publishers trying to subsidize the football gaming community with customizable alternatives. This is where publisher Pro Strategy Games and developer Kerry Batts come into play with Pro Strategy Football 21.

While not a standard “pick up and play” sort of game, PSF ’21 looks to blur the lines between strategy and action while trying to deliver the best of both worlds to a community that is starving for other options. Let’s see if they accomplished what they set out to do. Here is my Pro Strategy Football 2021 review. 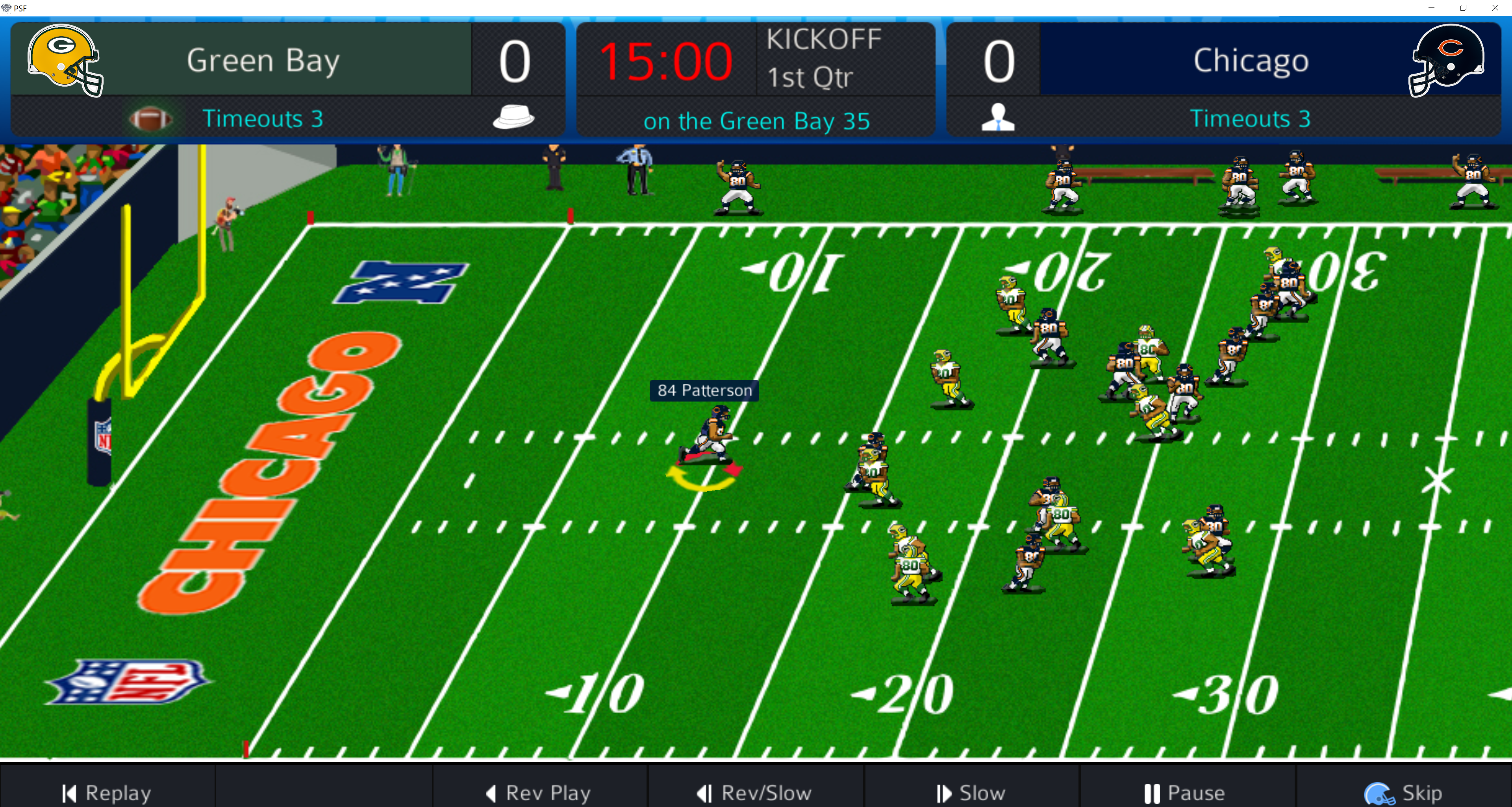 In the same vein as Out of the Park Baseball, PSF ’21 lets you watch the action unfold on the field in a way that looks very similar to the beloved Tecmo Super Bowl series. All the action is side-scrolling, and for the most part, on point. Meaning that the play I call is represented well visually and plays out on the field in ways that feel natural and realistic.

This becomes especially true when mods are added to the game that help represent the league you are trying to re-create. There is something to seeing your favorite teams, players and field art on-screen that helps deliver a much more satisfying experience, at least that’s the case for me.

There is a real anxiousness when I call a deep route in-game and watch the ball sailing towards the intended receiver. The disappointment and satisfaction that you feel when controlling players in a video game are almost matched here because of how the game plays out. It may be even more satisfying because there are zero stick skills involved and it is simply down to you matching wits against the CPU and seeing who outsmarted the other. 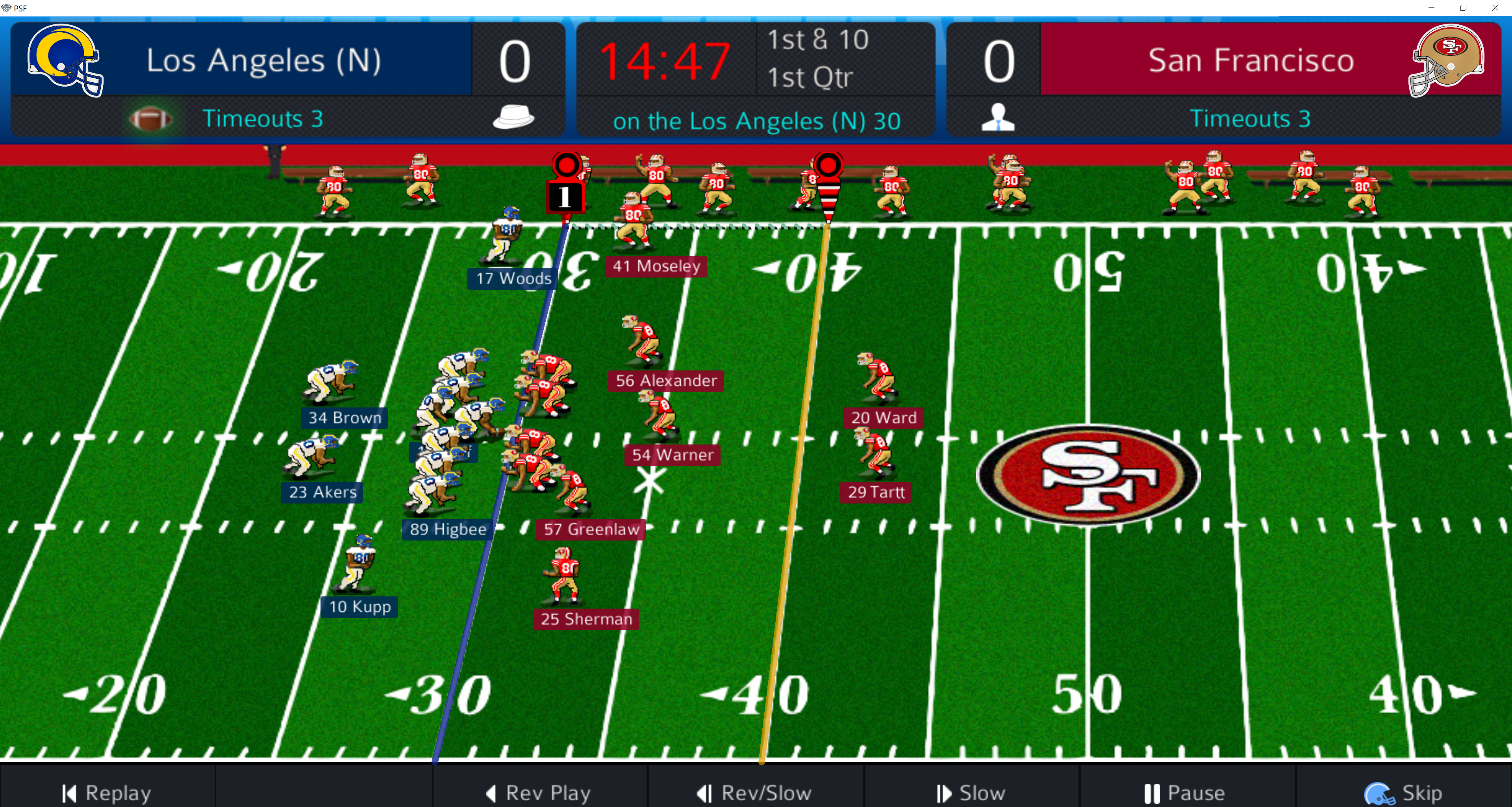 The one negative about seeing the gameplay in real-time is it can be time consuming. Playing 15-minute quarters, the average game took around 30 mins (or more) to complete, which is great for me, but may not be for some others. The game does offer an incredibly quick “sim week or game” option for those who may be under a tight schedule, and it also offers an in-game save option to finish later.

Pro Strategy Football comes with generic teams and players as the game obviously doesn’t have access to the rights of either the NFL, CFL or NCAA. The game does include a proper format for an NFL experience and can hold up to 130 customizable teams to help create an NCAA experience. 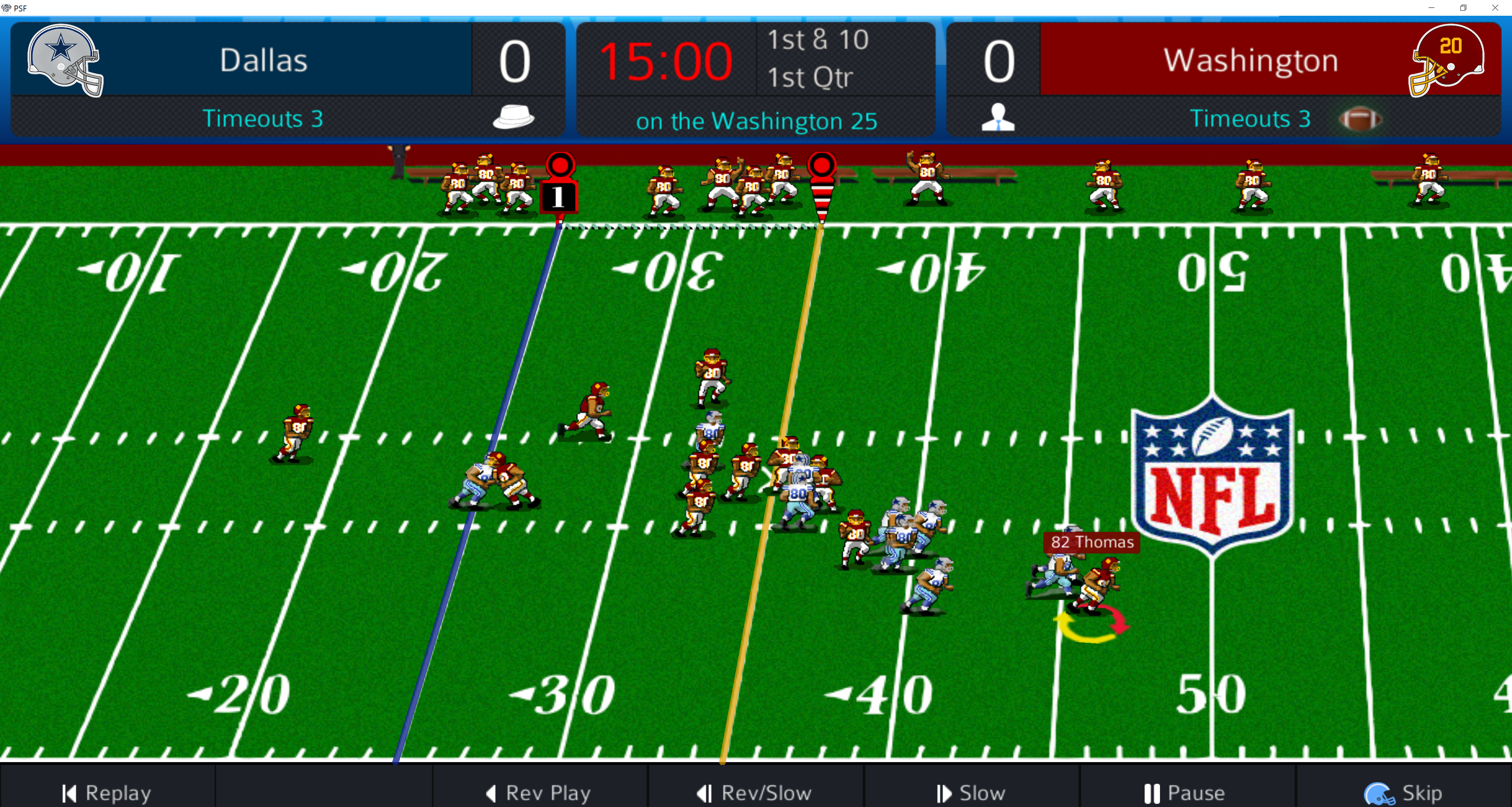 If your plan is to live in career mode like me, then the generic or NFL option is probably the best option. You can find the free mods available on the Steam game page under “discussions” or by simply visiting https://apollo1980.wixsite.com/psfteams21.

For me, the fun really kicked in when I started utilizing the community mods, specifically the NFL ones. The single-season mods range from 1966 until the current season and include logos, players, field art and more. There are also all-decade team mods available, as well as mods for stadium ambiance and music.

As I mentioned previously, none of these mods are required, and if you choose to do so, you can play entirely in the fictitious world that comes with the game. One last quick note, the mods that are available are easily installed, and you can have more than one at a time, as the game offers you the option of which mod you would like to use before the start of each play session.

As with most games that utilize a simulation algorithm, there will be oddities that pop up now and then, but in the full two years of my franchise that I played out in its entirety, teams that I would expect to be in the playoffs were, with a few exceptions. The game apparently is not a fan of the Steelers or the Packers, as both teams missed the playoffs both years, and only the 2020 Steelers managed to get to .500.

In year one, the Chiefs and 49ers managed to meet again with the same result as Kansas City won 34-24 in round two. The second-year Seattle squad took down Cleveland — of all teams — in year two, but based on Cleveland’s current talent and their free-agent signings and draft picks, this wasn’t a complete shock.

The game also did a solid job of showcasing the real-life statistical leaders in the NFL carrying over into the digital world. Quarterbacks like Russ Wilson, Tom Brady, Pat Mahomes, Drew Brees and Matt Ryan were leading the league in most statistical passing categories. Running backs like Ezekiel Elliott, Saquon Barkley, Dalvin Cook, and Derrick Henry were at the top also. 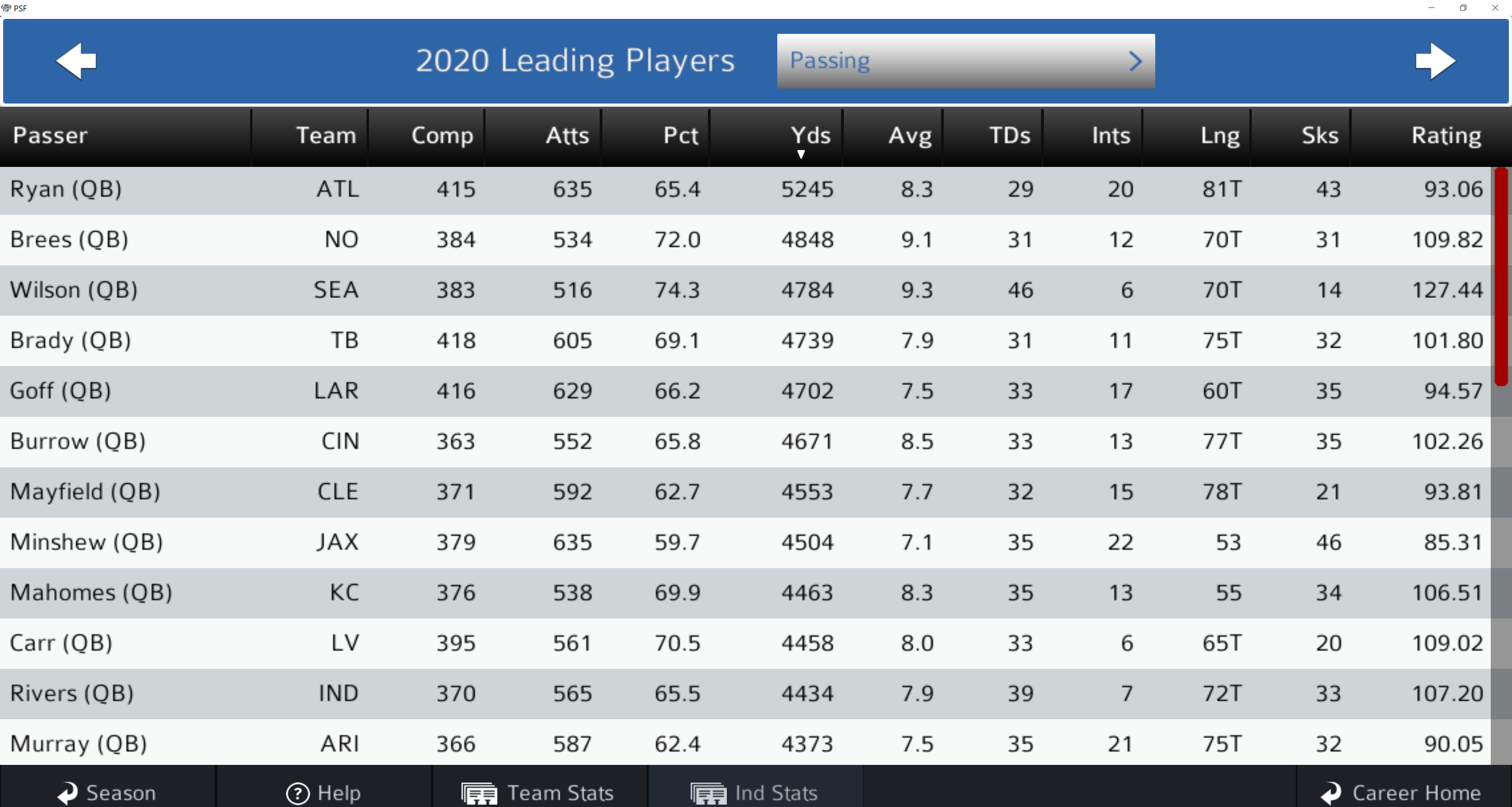 Keep in mind, this was me utilizing one of the many mods that are available for the game, so it’s a combination of the mod and the game’s sim engine at work in tandem. Regardless, the results were realistic whether I was playing career mode or season mode with any of the single-season mods available for the NFL experience.

I can appreciate the effort that one man has put in to even get a franchise mode into a game, especially when it’s not a full-time job. That said, while franchise mode is in the game, the depth of the mode may be an issue for some. PSF ’21 doesn’t offer up any type of monetary system that you have to follow to help assemble your team. And while there is a draft, it is an extremely basic one. It comes down to basically selecting free agents and rookies when the time comes for your selection. 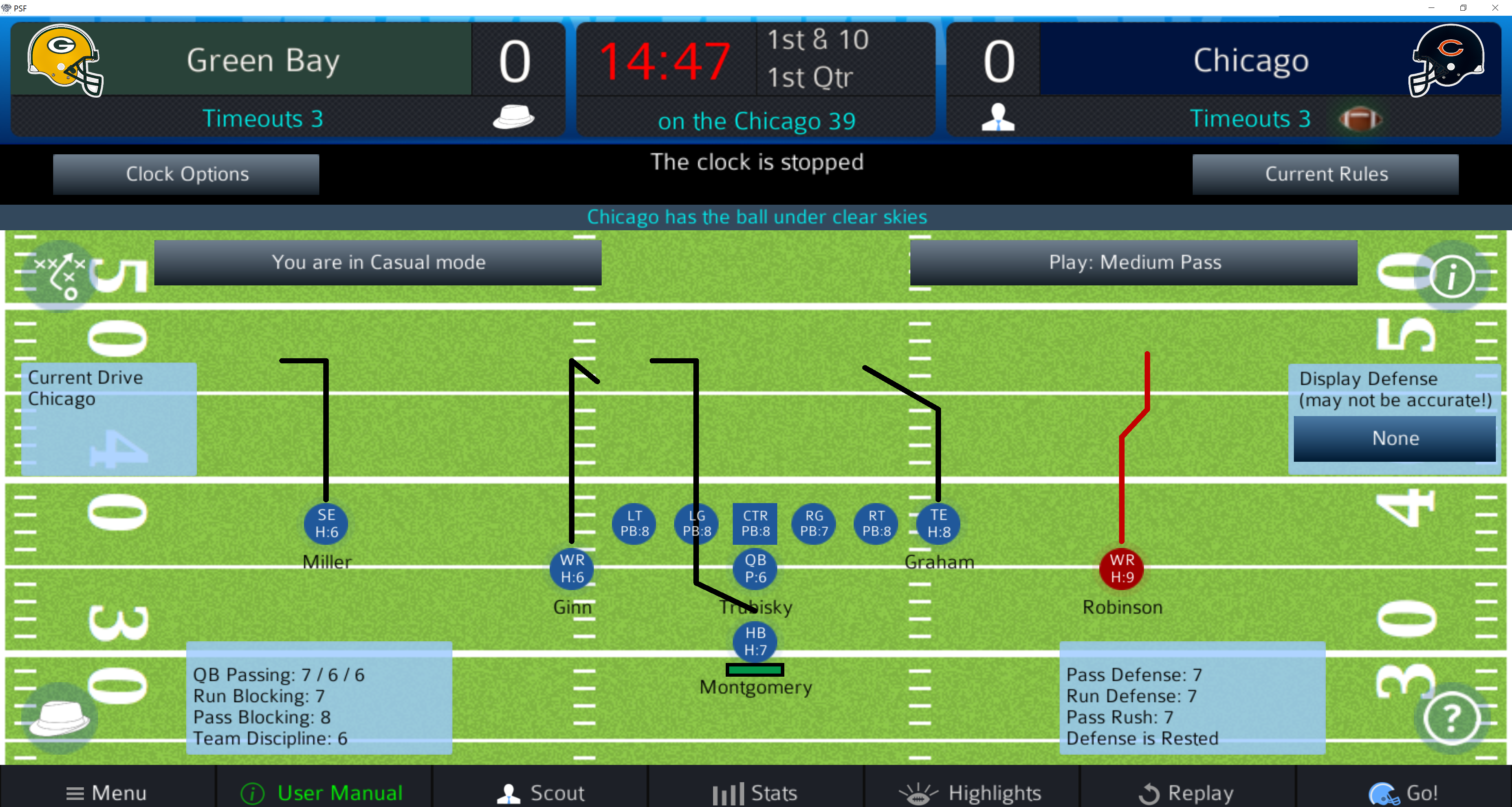 Franchise mode also only offers a roster of 43 players at the time of this review, and while some may not care as all the stars are represented here, the ability to maneuver and manipulate a roster due to injuries feels a bit weird. There is talk of raising that number in the future, but there is no promise it will be patched in this year and sounds more like an addition to PSF ’22.

It’s not all bad of course when it comes to franchise mode, as the game does offer year-to-year customizable schedules, and the ability to switch stadiums and train your players. The game also does a solid job of delivering just about every stat one could hope for — on the surface at least. If you’re looking for a deep statistical engine that provides information that a scout would use, you might be disappointed. Nevertheless, the game delivers a solid set of single-game and seasonal stats to scope out.

The most common complaint I hear about people being reluctant to try strategy games such as Pro Strategy Football 2021 usually comes back to them being too complicated or it being too boring to watch games play out in text/visual form. Pro Strategy Football ’21 succeeds in both those categories as it offers different approaches for veterans of the series and newcomers dipping their toe in the water for the first time.

While it may not be as polished or as deep as the OOTP or the Draft Day Sports series — and it is not — the game offers a fun and addicting way to play out a game, season or career with your favorite team while giving you enough control to make your decisions matter.

There are some issues that I spoke about previously, like no monetary system, no real free-agent system and what I consider a basic draft at best. The good news is that the developer is always listening and implementing community ideas as often as possible. There is a lot of fun to be had with PSF ’21 and with a price tag of only $19.99 (USD) the return on investment is solid.