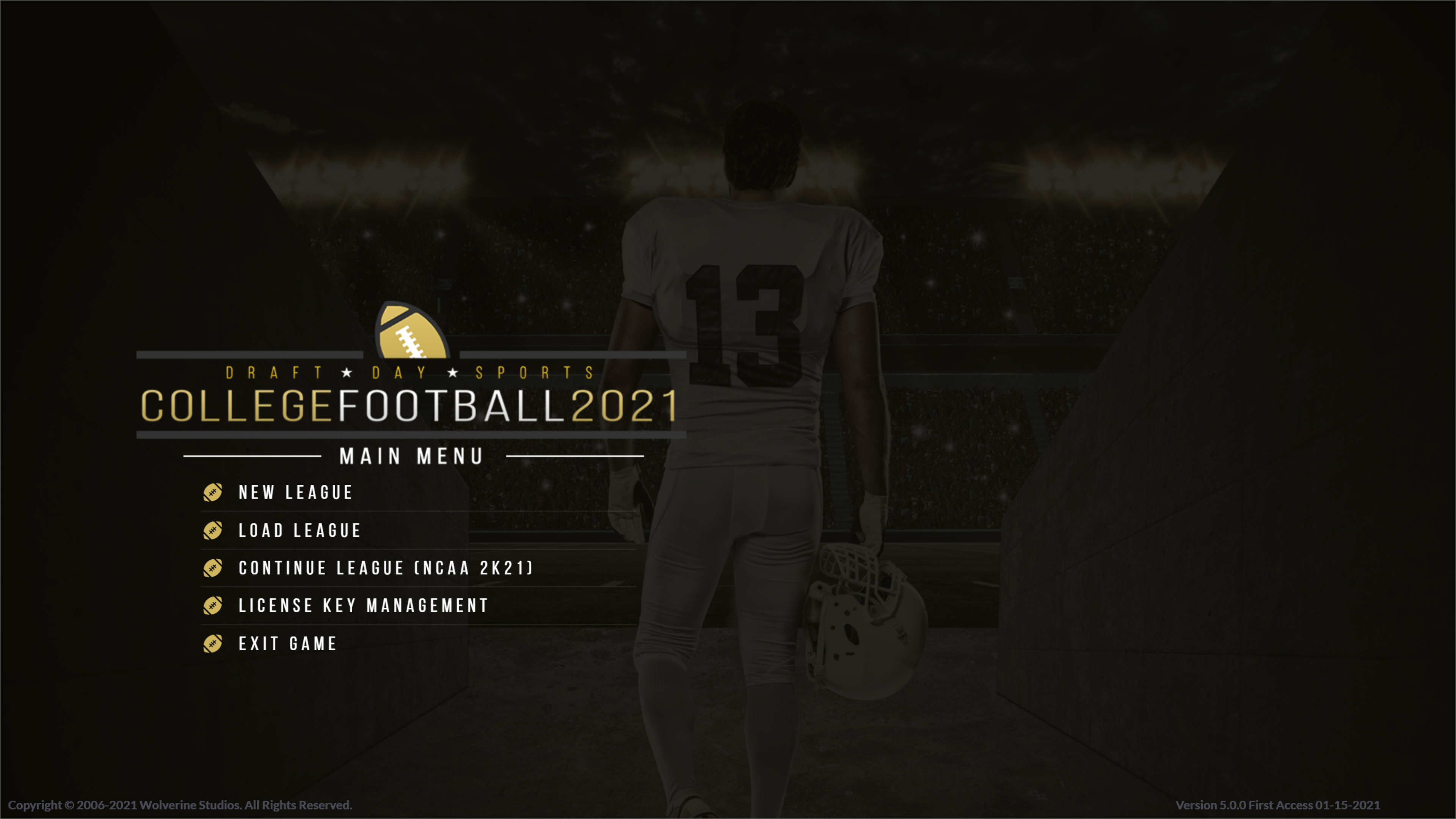 Although the college football season has wrapped up in real life, Wolverine Studios has given the community a chance to relive it all over again and be part of the action as we continue to ride the high of college football being brought back to consoles by EA. Draft Day Sports: College Football 2021, one of the many simulation-based titles that Wolverine Studios has in its arsenal, has now left Early Access and is set to give simulation-style fans a chance to relive the last college football season — and much more.

DDS: CFB ’21 provides the user the opportunity to rule over the entire landscape of college football as the commissioner, or you can simply choose to be a head coach and try and guide your team to the promised land via smart coaching, play calling, strong recruiting, and a bit of luck.

With that in mind, let’s dive in to how successful Wolverine Studios was at pulling all of this off.

With any type of simulation-based game, it is imperative to give the user a plethora of options to keep it interesting, and thankfully, DDS: CFB ’21 does exactly that.

For starters, I jumped into career mode and took over my beloved Fighting Irish to control darn near every aspect of a season and offseason. The minutia of the sport really shines in career mode, and yet the game allowed me to delegate certain aspects of the season that I had little interest in handling.

DDS: CFB ’21 also allowed me to take control as the sole governing body of the college football world. While I prefer to stick with one team and watch the games play out individually (which you can still do), Sandbox mode is full of choices and options as far as the eye can see (and read). 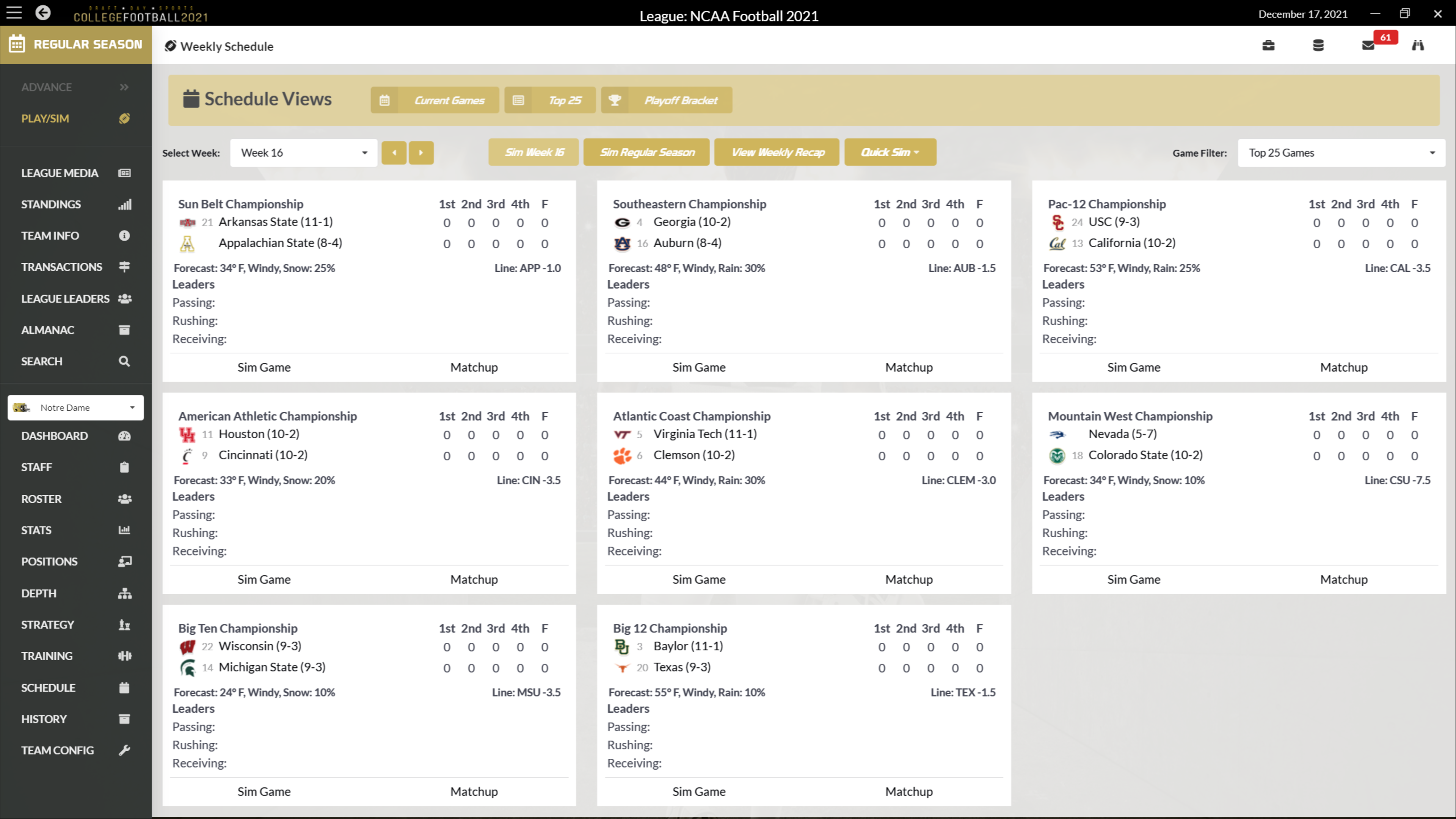 There is something inherently awesome about simulating one game at a time in the top 25 and watching how the year unfolds on a weekly basis. On top of the power to see every game as each week unfolds, you are provided full statistical recaps of each game. This allows you to peruse the seasonal stats in a variety of ways for each team, each conference, or view who the nation’s top statistical leaders are in each category.

I think it’s important to note here that even while in Sandbox mode, the game allows you to control every single team, or move your focus to just a few — or even one. You can still recruit, make depth chart choices, and do everything that can be found in career mode. In other words, Sandbox mode just allows a bit more flexibility in choosing how to set up and carry through each season.

The game also gives you the ability to join an online league and have others participate in the league as part of a huge multiplayer online world of college football. It does play out a bit different than what people are used to who have played in standard online leagues for standard sports titles, but the option is there and there is plenty of help in the (official) forums if you need help.

The ability to apply real-life mods to DDS: CFB ’21 is where the game truly does shine. It’s also what makes this game so addictive and immersive for me. I love college football with a passion that can only be described with words I am not allowed to use during a review, and when I applied the NCAA mod to DDS: CFB ’21, it pulled me in and never let go. 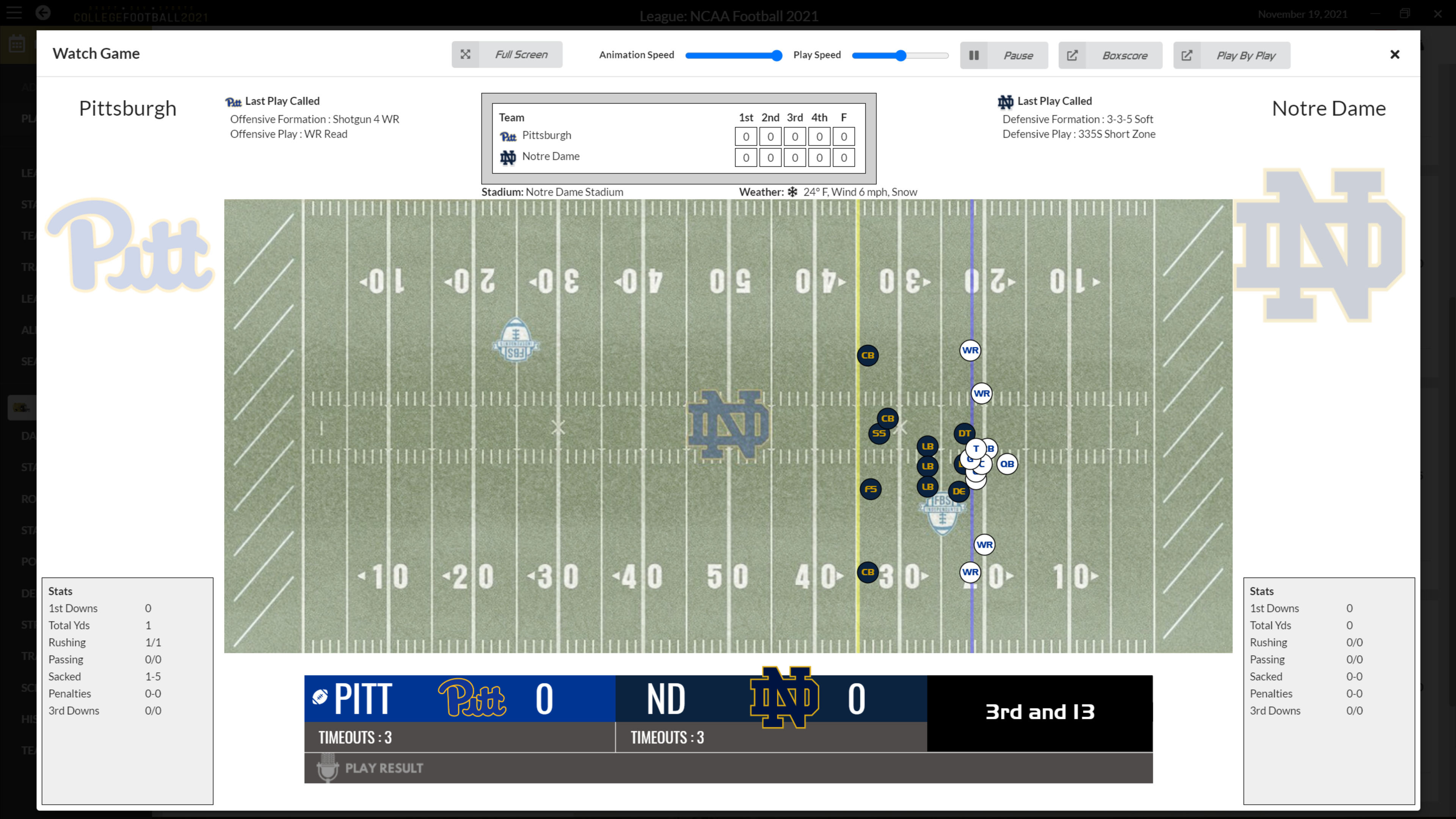 This specific mod recreates the world I am familiar with and love. And not only does it bring all the standard logos, school names, and conferences alive, it also has the bowl logos and names, and even the national title.

Here is a breakdown of what is and is not included with this mod (per mod creator: Slybelle1).

And what is not included: 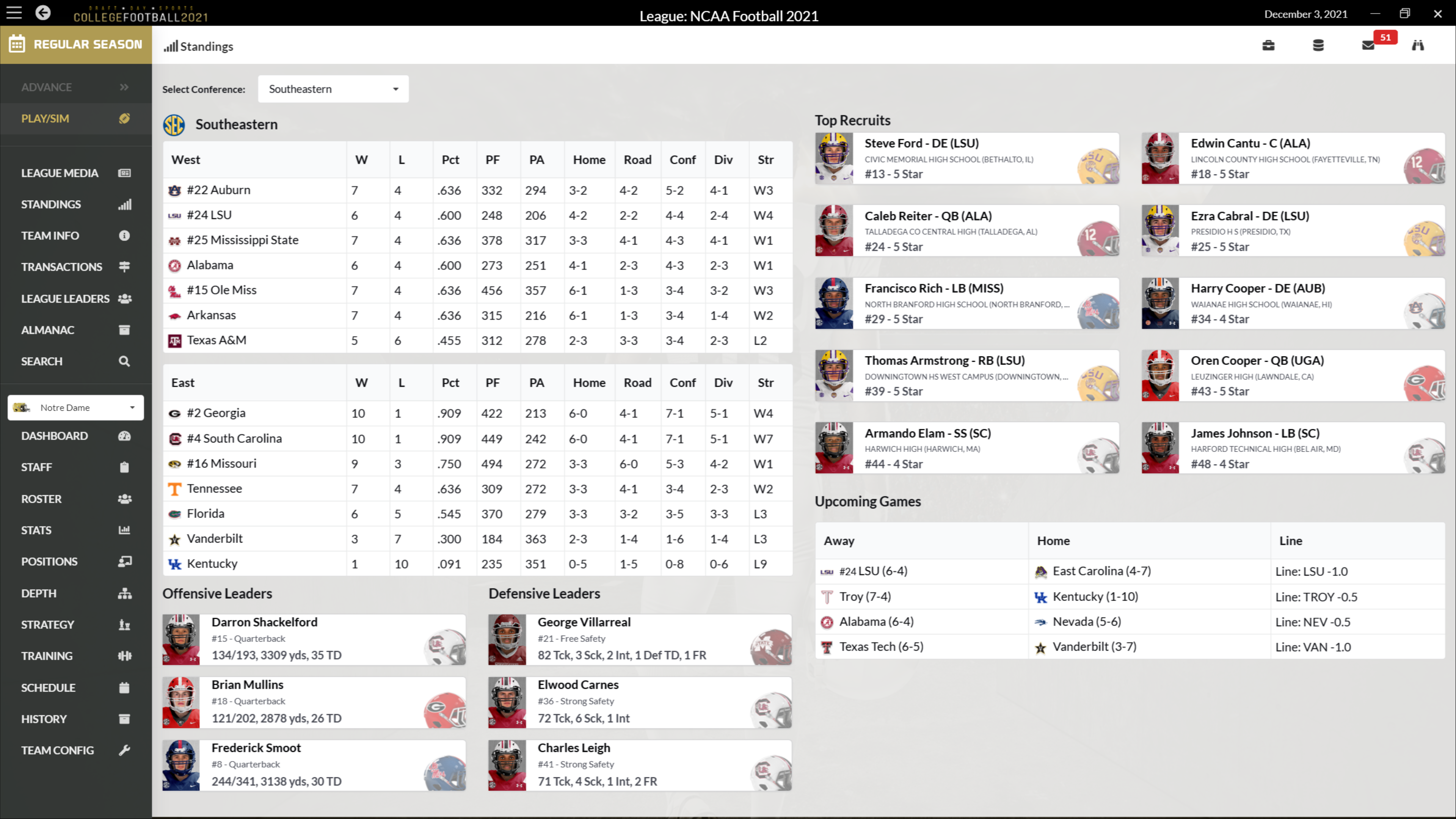 There is no requirement at all to utilize this mod to enjoy the game, and this is important. The game will run and perform exactly the same way with the standard fictitious teams that have been created by Wolverine Studios.

I have spoken about different aspects of flexibility provided by DDS: CFB ’21, and it is all true and on point. The developers have delivered an incredible experience that lets you decide how you want to enjoy the world of college football. 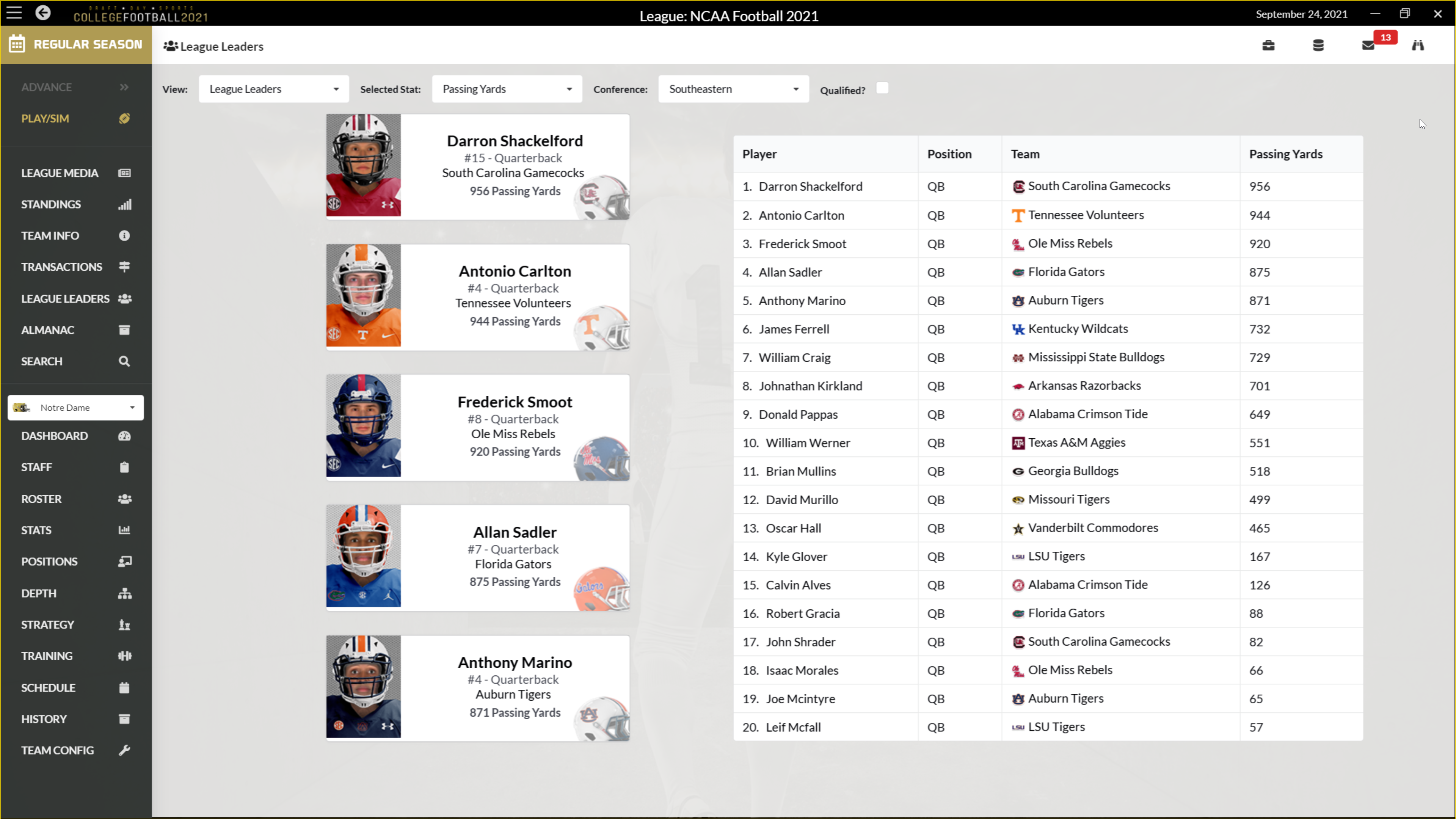 The amount of choices and variety that DDS: CFB ’21 delivers is staggering, but in a good way. I found myself trying different approaches and enjoyed them all, but to have the option to change said world on the fly or restart it is what I found to be the core of my enjoyment.

The bottom line here is that DDS: CFB ’21 allows you to play how you want, where you want, and when you want, and isn’t that what we all really want out of a game?

There isn’t a lot that I don’t like in DDS: CFB ’21, but the sim engine can be a bit of a struggle to absorb at times for a few reasons. First, I had the college football real-world mod applied during most of my experience, and I watched perennial powerhouses lose to teams they never would in real life.

In year one, I witnessed Alabama finish the season at 7-5 with losses to Vanderbilt and Missouri. During that same season, I watched Ohio State get demolished by a Michigan squad that was 5-6 on the year. It was a struggle to watch this universe not perform within the same parameters that my eyes and mind were so used to.

After trying to reconcile with the fact that this world I was playing in wasn’t the same world that I stood by and cheered for in real life, it hit me. The simulation engine doesn’t know that Alabama would never lose to Vandy in the current landscape of college football, or that the last time the Wolverines beat the Buckeyes seatbelts were a nice-to-have in automobiles.

The second issue I experienced has to do with the simulated stats of each game. I watched quarterbacks regularly throw for between 500-600 yards a game, and while the real-life record is 734 yards, set back in 2014, games like that are absolutely the exception and not the rule.

In no way do either of these issues cause enough chaos to remove me from the DDS: CFB ’21 world, but these two issues happened enough for me to take notice.

According to Wolverine Studios, one of the selling points of DDS: CFB ’21 was a simpler approach and more streamlined user interface for the game. The goal was to make it superficially more pleasing to the eye and easier to understand, especially for newcomers.

As someone who has played this series quite a bit, I would say they accomplished what they set out to do. Even with that said, I still think there is room to do quite a bit more to make the game easier to understand and help alleviate some of the frustration people who are new to the series will inevitably experience.

Another simulation series, Out of the Park Baseball, struggled with this for years, but has streamlined the experience and figured out the formula. It’s now much easier to jump in with very little knowledge and start enjoying OOTP in full. I hope as each edition is deployed on a yearly basis, the DDS: CFB series will get to that point as well.

It’s always a hard sell for game video game developers to draw new fans into the world of a sports simulation if they have never experienced it before. Thankfully, DDS: CFB ’21 offers a bevy of options for newcomers and veterans of the genre.

You can govern a fictitious world of college football or apply real-world mods to the game and enjoy the familiarity of what they bring to the experience.

There is a real excitement with DDS: CFB ’21 as you watch the weeks roll by, the outcomes pop up on the screen, or dig deep into the sim aspects of everything and let the minutia consume your soul (and time).

As I mentioned before, DDS: CFB ’21 isn’t perfect, as some of the simulation results and the top 25 occasionally will have you looking at the screen with a bit of disbelief. However, it’s not enough to ruin the immersion and world that Wolverine Studios has created. It can also be a bit tough to understand the ins and outs of the game for newcomers, and that will create a bit of frustration for some.

The company does provide a solid website and forums, and most newcomers will them find very helpful.

Lastly, below you can find links to purchase the game, install the real-world mod, or try out the game via a full demo.