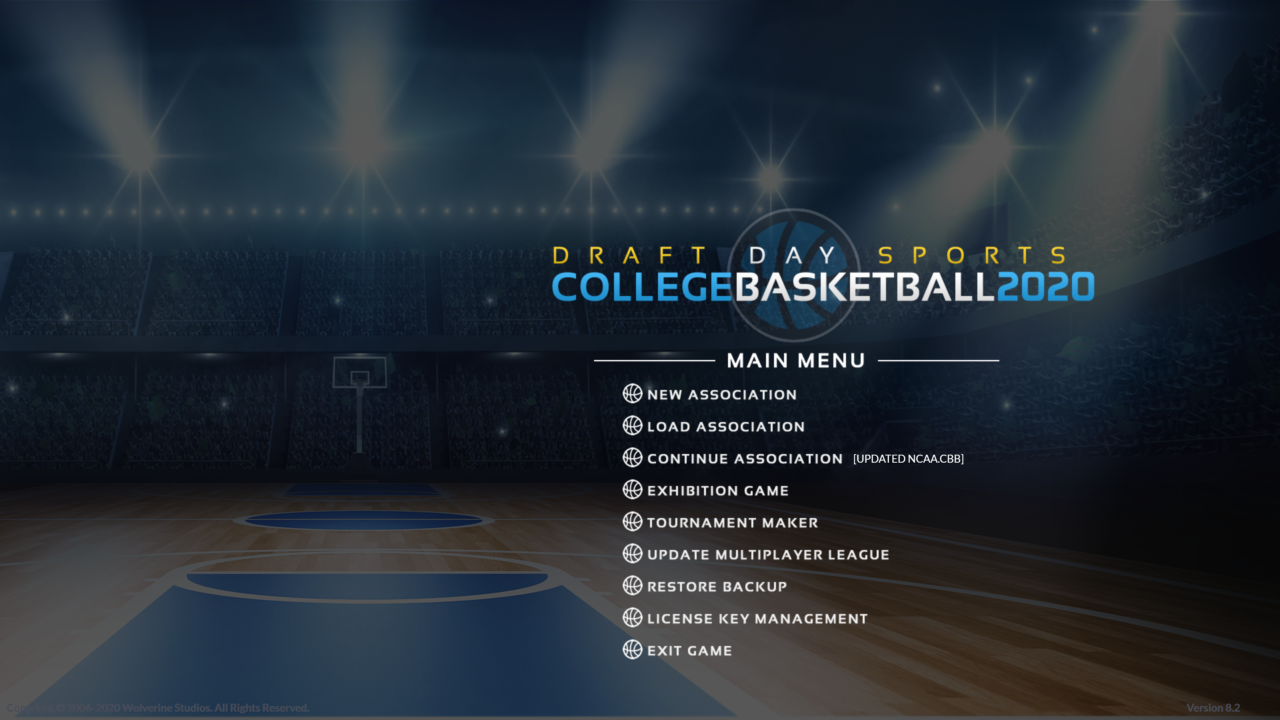 In case you haven’t noticed, Wolverine has been filling the void for sports that have fallen by the wayside, especially in the world of collegiate athletics. The yearly releases of their college football and basketball titles are some of their most anticipated games in a catalog that is rich and diverse. Add in the fact that each game can be modded on the PC to provide a plethora of real-world leagues and scenarios, and it makes the hurt of lacking College Hoops 2K and NCAA Football a little less stark. In a time when so many sports have been postponed or canceled, it’s nice to have Draft Day Sports: College Basketball 2020 around.

Depth is really the area of DD: CBB 2020 that absolutely shines for me, and it will be true for many others who play the game as well. The game offers an experience where you can run your favorite squad or start off at a smaller program with the hopes of working your way up through the ranks. Either approach is available in-game, and the choice is ultimately up to you. 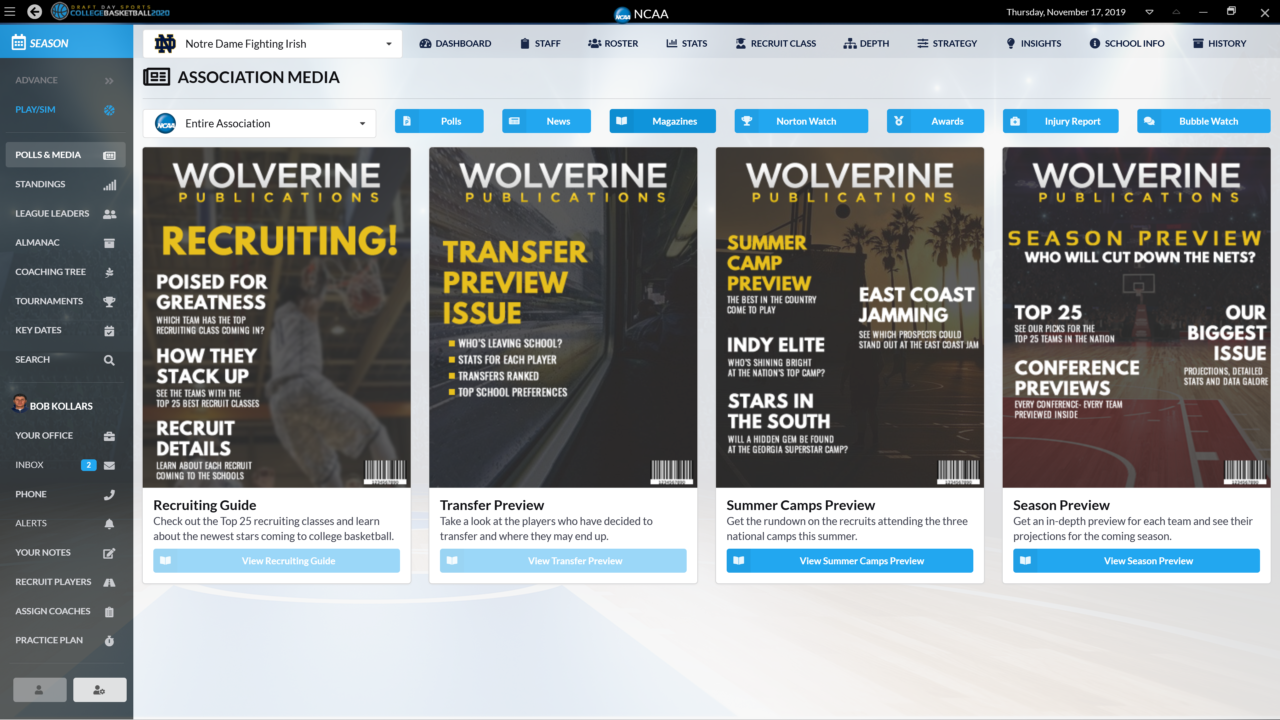 I chose to start and take over as my favorite team to see if I could take them to the next level of consistent competitiveness. From day one in the virtual office, the game shows you just how deep it really is by allowing you to attend summer camps, begin recruiting for team needs and working with your school’s athletic director on your scheduling.

Once recruiting truly takes over as the summer’s focal point, you can visit the recruits, watch game video on them, pitch why your school is right for them and much more. You can even deal with the darker side of recruiting, which I will not disclose, but it hits home and really will test your integrity as a virtual coach. 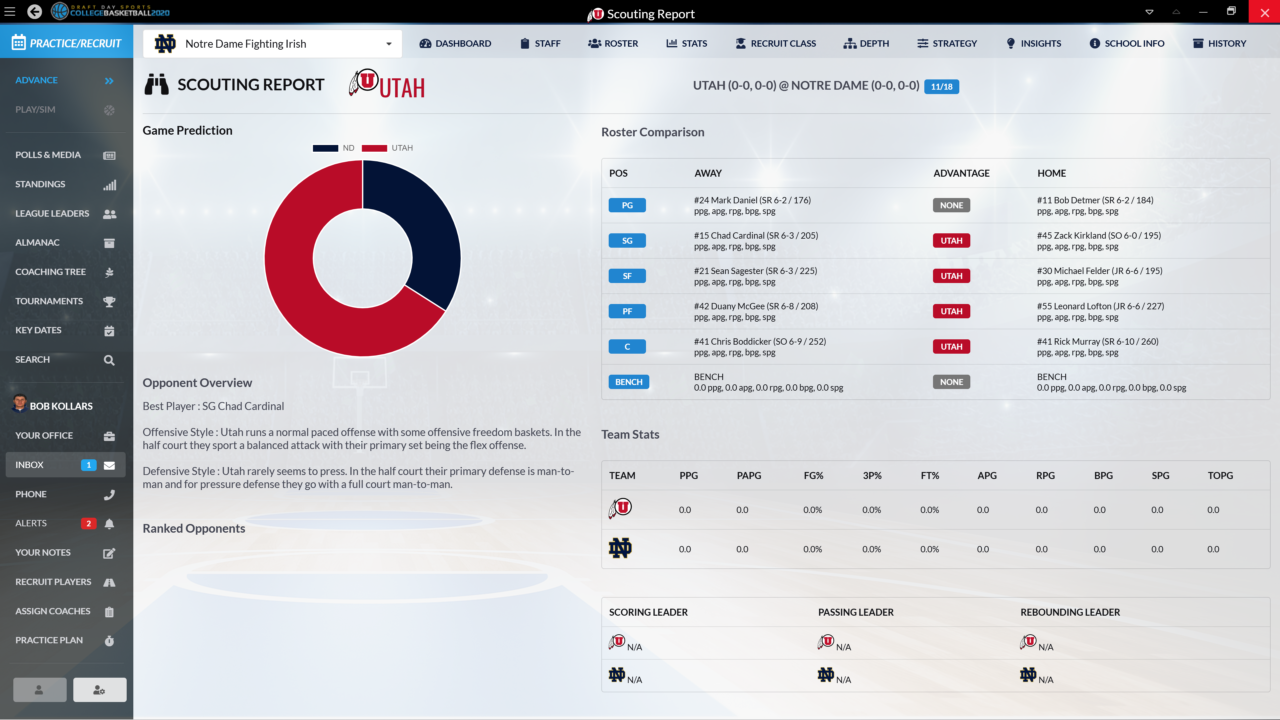 Once the season starts, it becomes a bit more systematic and methodical, as you will run your weekly practices, play your scheduled games and move onto the next week. The game does offer you the ability to call recruits and current players to offer game advice or maybe suggest they need to clean up their act a bit before things take a turn for the worst.

As the season progresses, you can always access team stats, change team depth charts, look at team rankings and standings, and take a sneak peek at the bubble watch if your team is teetering on the edge of punching their ticket to the tourney, or just hoping to prolong the season and practice time with one of the smaller tournaments.

In the end, the depth of this mode provided an amazing experience for myself, and I often found myself losing hours in the virtual college basketball that Wolverine created here.

Whether you prefer a full-blown career or just playing one-off games, the gameplay found in Draft Day Sports: College Basketball 2020 is both fun and realistic. Once you and your team hit the court against your opponent, you will find you have the option to watch the game play out at variable speeds. You will also have the option to change your game plan if what you thought would work is not. You can have your team take a different approach in terms of defensive and offensive mindsets, whether that be crashing the boards, living or dying from the three-point line, or slowing or speeding up the tempo. It all has a real impact on the game, and it can all be altered on the fly. 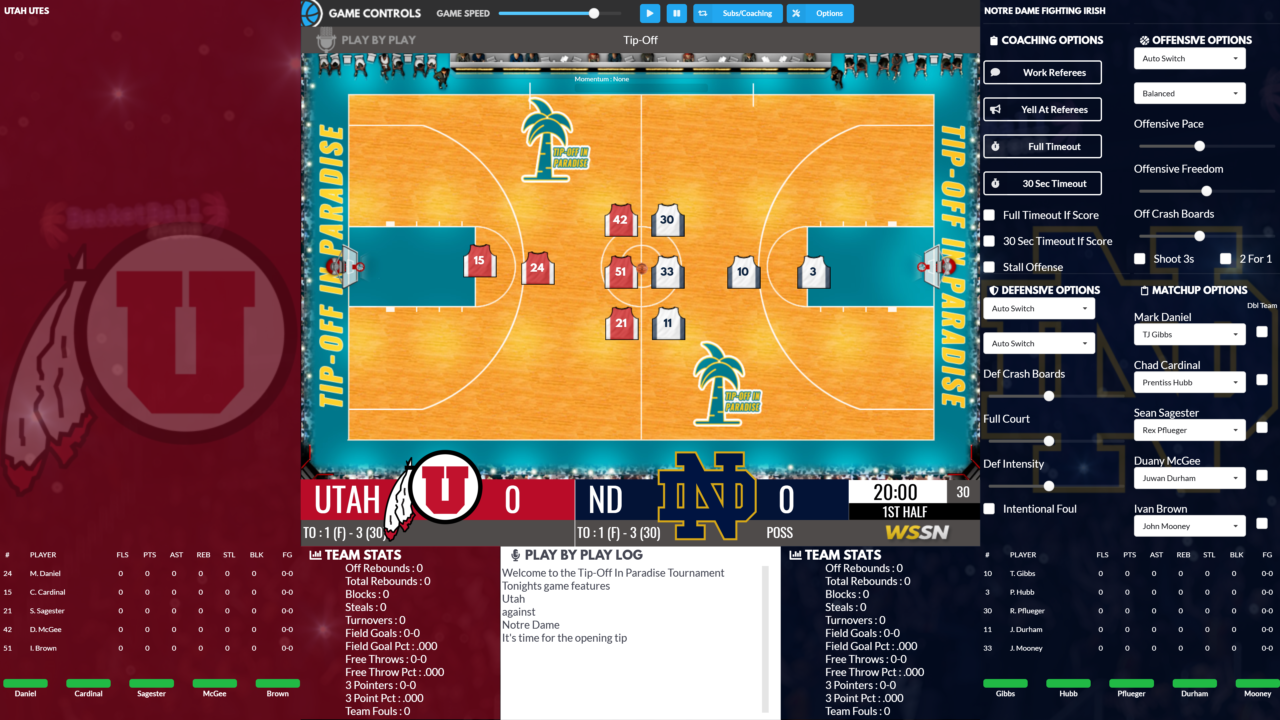 The game also allows you to hammer the refs if you feel your team is getting the short end of the stick. This is where I learned the hard way that the refs have limits, and if you push too far too fast, you may find yourself watching the rest of the game from the locker room. If that happens, you lose any ability to control any aspect of the game, which can feel crippling in a big matchup.

Bottom line is that watching the game unfold and knowing your decisions have a real impact is a lot of fun. You may think you know what the outcome will be, but as the old saying goes “that’s why they play the game.” 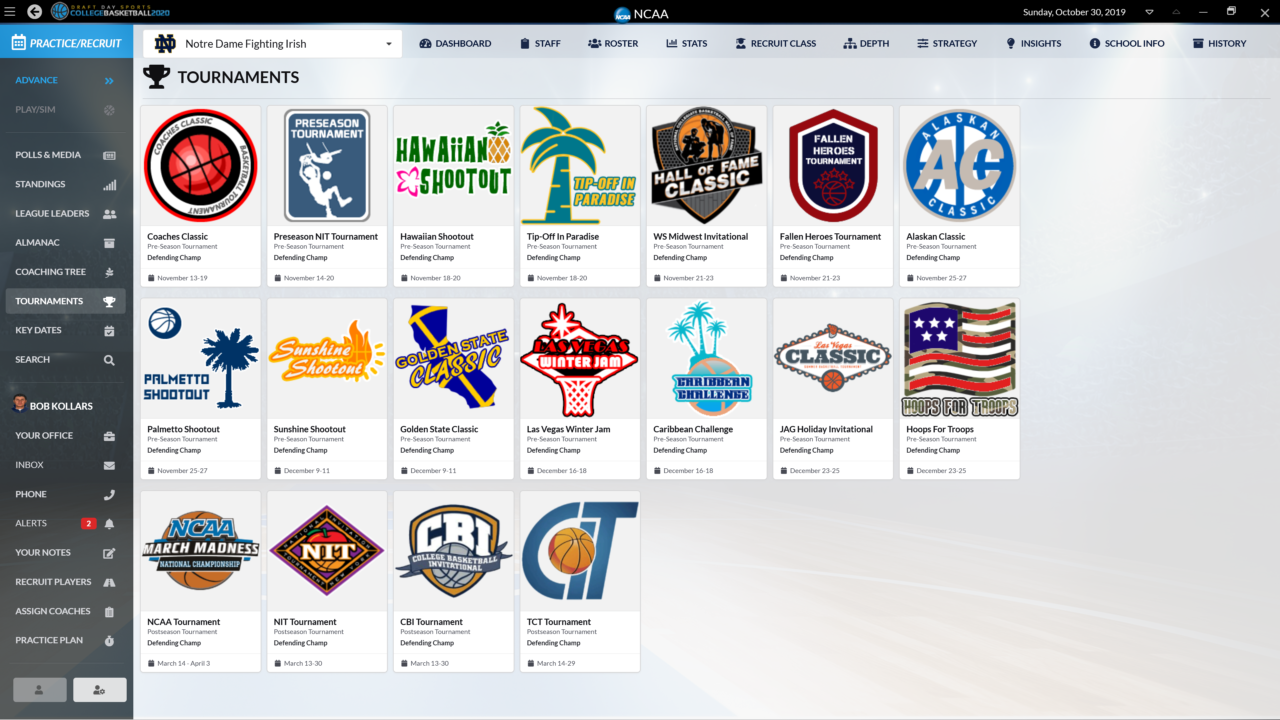 Obviously, Wolverine’s titles come packaged with generic teams because either the licenses are too expensive for a smaller company, or they just cannot be secured for legal purposes. That is also the case with DD: College Basketball 2020, but have no worries as the community has stepped up once again and provided an amazing mod that completely takes the depth of the title to a whole new level. 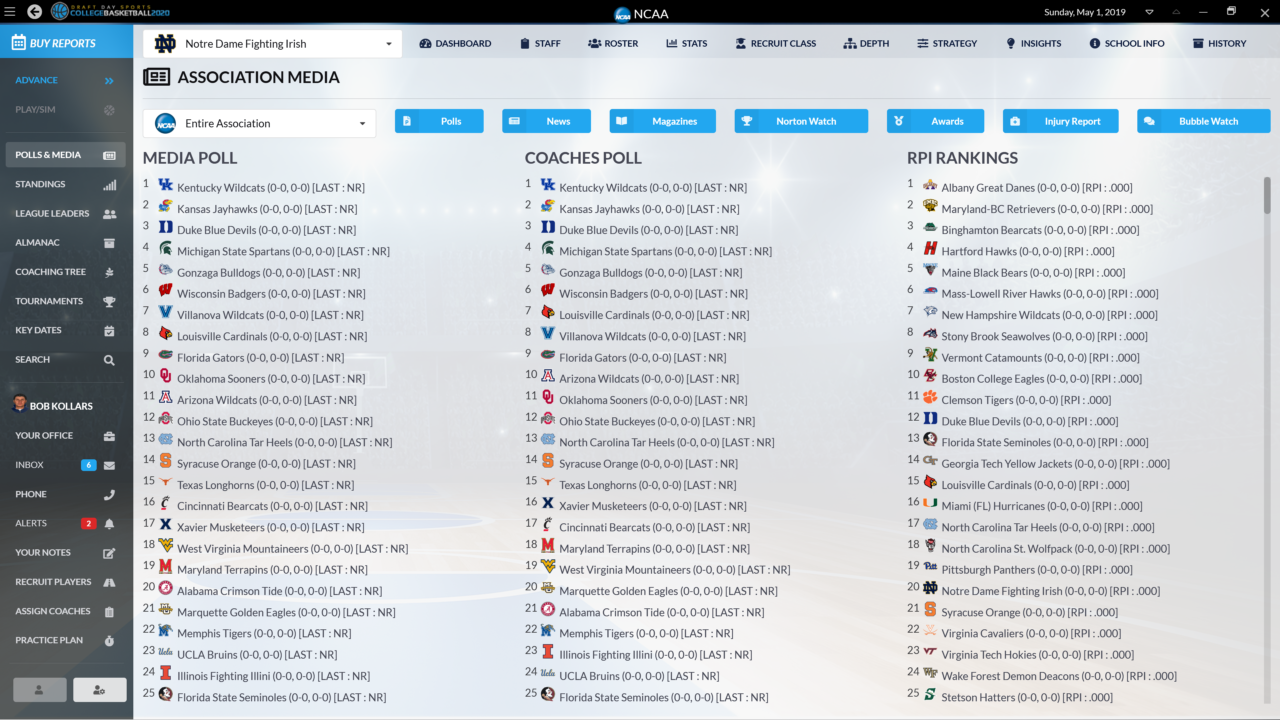 The list of items the mod changes is impressive, and it includes real coaches, team names, uniforms and logos, conference names and logos, tournament names and logos — including preseason, in-season, and of course all four postseason tournaments. On top of that, every court is correct visually, and while rosters are not included, the game itself allows you to edit each player on each team if that is of importance to you, both in name and ability.

Honestly, the 2-D gameplay is fine for what the game provides in terms of tracking the on-court action throughout. And the group at Wolverine has made some nice improvements to it over the last few years, but when compared to say that of the 3-D option in Out of the Park Baseball, it made me long for that type of ability in DD: College Basketball 2020.

As a longtime fan of EA’s and 2K’s college offerings where I had a controller in my hand, going to a sim was a bit difficult. Seeing the action play out in 3-D really helped me embrace this type of game, and it would take the college basketball series to a whole new level for me. I absolutely love the game as it is, but seeing the players represented on the court by more than just a uniform would be highly welcomed.

I also understand what an undertaking that would be for the small development team, and the difficulty it would provide. We can still dream though, right?

A few years ago, I would have never imagined I could fall in love and be addicted to a sports simulation title like the ones Wolverine offers, yet here we are. The amount of depth and options that the game provides in a wonderfully easy to use interface makes the game easily accessible to veterans and newcomers alike. When you add the community college mod (free of charge) into the equation, the world that is created is an addictive one.

Whether you are new or are a seasoned veteran to the library of Wolverine titles, Draft Day Sports: College Basketball 2020 has received enough improvements for me to consider this a must-buy for anyone with even the slightest of interest. If you are concerned that sports simulations may not be your thing, Wolverine provides a free demo so you can test drive DD: College Basketball 2020, as well as all their other titles.

Out of the Park Baseball '21 Review: You Should Already Know It's Good
TT Isle of Man 2 Review: Hard as Hell But Worth the Journey