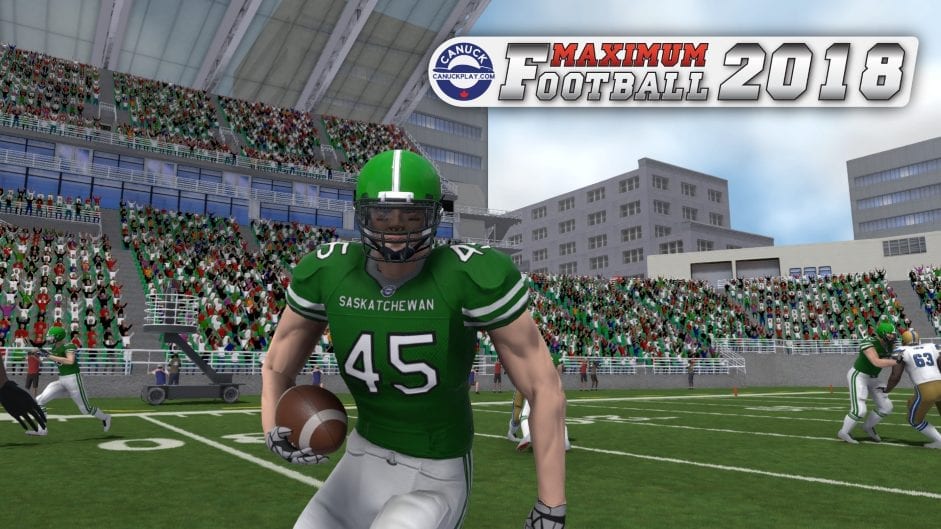 Many would consider the current landscape of video game football somewhat barren thanks to the exclusive deal between EA Sports and the NFL, and the loss of former EA Sports IP, NCAA Football. If you’re not a fan of EA’s Madden series and looking for alternatives, the options have been limited to playing older, now-defunct titles before the exclusivity of the NFL license, or non-licensed products, which thankfully have seen a slight re-emergence over the last few years. One of those titles now available is Maximum Football, now known as Doug Flutie’s Maximum Football after a recently announced partnership with the former NCAA, CFL, USFL and NFL star. While Flutie is mostly known for talent in the broadcasting booth these days, the developers of Maximum Football felt he was a perfect fit as the face of the independent football title. We had a chance to sit down with the developers of DFMF and ask how this came to be, and many other questions.

Operation Sports: How did the deal with Doug Flutie come together?

Doug Flutie’s Maximum Football: Spear Interactive and Canuck Play approached Doug’s agent about three months ago. We had put together a short list of players and coaches who we thought would fit the brand, but Doug was absolutely our number one choice for so many reasons. As it turns out, Doug and his agent had been looking for ways to enter the game space, and our title was the perfect fit for them. So it just turned into a win-win for everyone.

OS: What has changed now that Doug is aboard?

DFMF: Well the first thing it did was bring a lot of media attention. Through gaming and sports media on the web — as well as traditional newspaper and TV pickups — the last report I saw we were hitting about 10 million people who have seen the announcement. So that’s pretty huge. The other thing it has done is re-enforce the fact we’re not going away anytime soon. We are an indie studio building what is technically still an indie title, and sometimes indie titles are dismissed out of hand. But now people are taking notice. And last but not least, it’s opened up many doors to investment groups interested in speaking to us about the project.

OS: Right now the game includes rule sets for CFL, NFL and CFB. Do you see the game staying that way in future iterations or more of a focus on one discipline?

DFMF: We will always support the three major rule sets in terms of on-field gameplay, but I think you will see a few of the off-field features focused towards specific styles of football. We’ve already announced we’re going to start work on a college football dynasty mode — but even with that, you would be able to play games with Canadian rules if you wished. 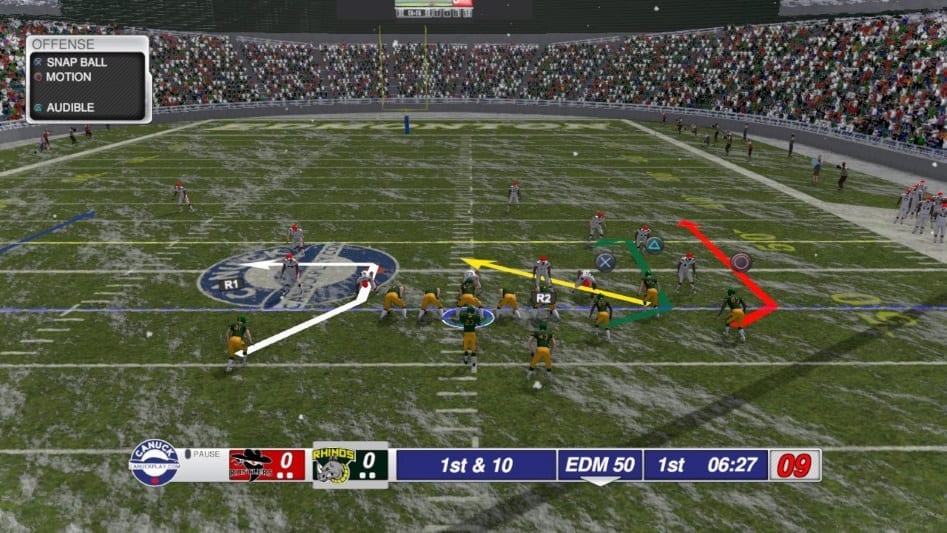 OS: The community seems to gravitate towards the idea of a college football game. How realistic is that, and how difficult will that be to implement for you guys? Can a solid foundation be done in a year’s development cycle, or is more needed?

DFMF: Well the rule set for US college football is there already. You can already play with the college field layout, clock rules, etc. The next step is growing the off-field features, such as the dynasty mode that I mentioned. Like all large features, they’re iterative. We will start with a really solid base and each year it will grow. Canuck is a very small team so we have to take a lot of small bites. But even large studios with multi-million dollar budgets don’t put everything into a feature in one year.

OS: Obviously, you guys are working hard to improve all aspects of the game, but what are a few areas that hover above the rest? Areas that will be a focus for next year’s title, if you will. 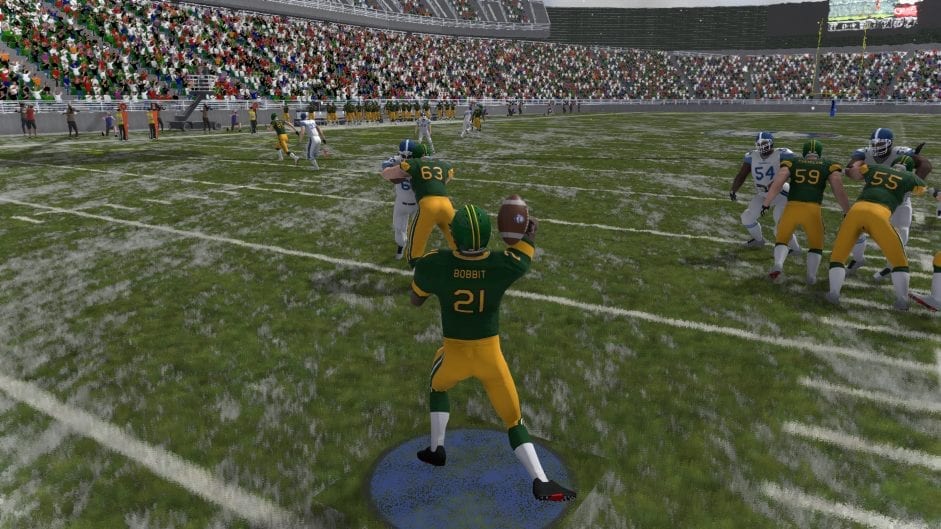 OS: The team has just released a patch that includes a new logo and helmet creator. With logos, helmets, and rosters all being customizable, any chance that any of these three can be shared through an in-game program for the community to share their creations with each other.

DFMF: Unfortunately we can not allow user-generated content to be shared. I’ve had lengthy conversations with both Microsoft and Sony about sharing content from within the game, and in both cases the only way to share this content is to allow it to be uploaded/downloaded from a server that we own and maintain. That’s not a technical issue, but it would make us legally responsible for the content on the server, and we would spend all our time dealing with C&D’s [cease and desists] and Take Down orders from IP owners. So until there’s a change in the legalities of who is responsible for content stored on a server, we’ll have to let the player base get creative in how they deal with their UGC. 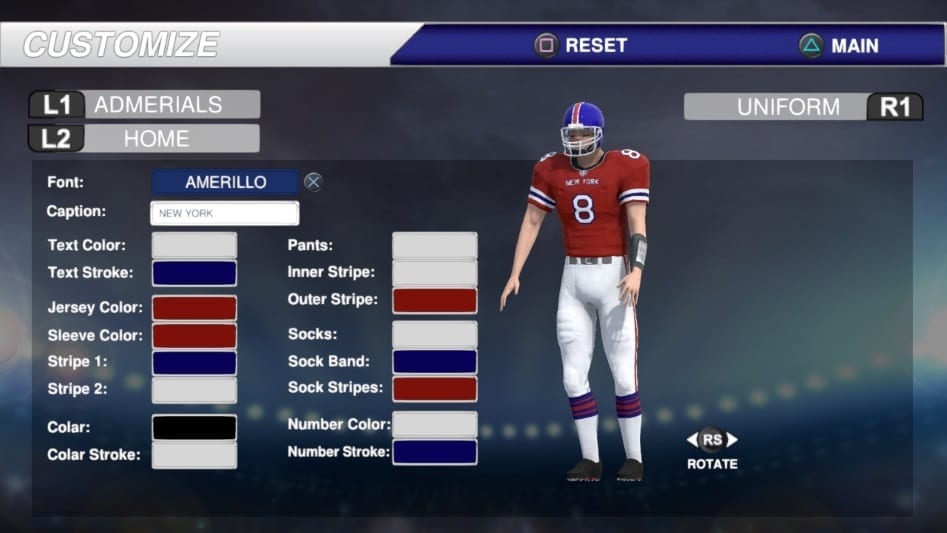 OS: Staying on the customization aspect, any chance in the future that the community could create items on the PC and transfer them to a console in the same fashion that PES does?

DFMF: Again, this is something I’ve looked into with first party. They still recommend the “upload to a server” approach.

OS: If you could have the rights to any of the big three licenses, NFL, NCAA or CFL, in a perfect world what license would you gravitate towards?

DFMF: From a purely financial standpoint, the NCAA makes the most sense.

OS: How difficult is it to create an independent non-licensed football game with Madden owning the exclusive license?

DFMF: It can be challenging from a funding perspective. I’ve spoken to many investors and investment groups, and they’ve asked the question, “Have you gone to the NFL to ask about a license?” Then I have to explain to them who EA is and what they’ve done. That conversation naturally progresses to NCAA or CFL licensing, and the challenges there. Unfortunately, that has put off some potential investors, which has made my job all that much harder because it means the development team stays very small. What’s been interesting is that we’ve seen zero backlash from our community about the lack of NFL or NCAA licenses because, I would imagine, that the vast majority of football gamers know the history there. It’s the lack of CFL license that draws the most ire.

OS: Lastly, what is the one message you absolutely want to make known to the DFMF community to get them excited about the future of this IP?

DFMF: I just like to remind people that we’re on edition two of our franchise, and those other guys have been at it for something around 30 years. Right now we are in the best position to grow and to deliver what the football gaming community is asking for. The community asked for a logo creator, we listened and we added it. The community asked for more college features, we listened and we are adding them. The community asked for improved animation, we listened and we have that in the works. I think we do a far better job than even the likes of EA when it comes to hearing what people are asking for and taking action on it. We don’t make a lot of promises that we don’t keep. We’re up front with our community, which means sometimes the answer isn’t what people want to hear, but I think that’s better than empty promises. The Maximum Football franchise has made many major strides over the past couple of years, and I think with the direction we’re headed in there’s nothing but good things down the road. It just takes a little while to get there.

Doug Flutie’s Maximum Football can now be purchased and downloaded from the PlayStation and Xbox stores. And with the most recent patch allowing for full team and logo editing, the game allows users to create what league most interests them.

The Trends That Moved Sports Gaming Forward in 2018