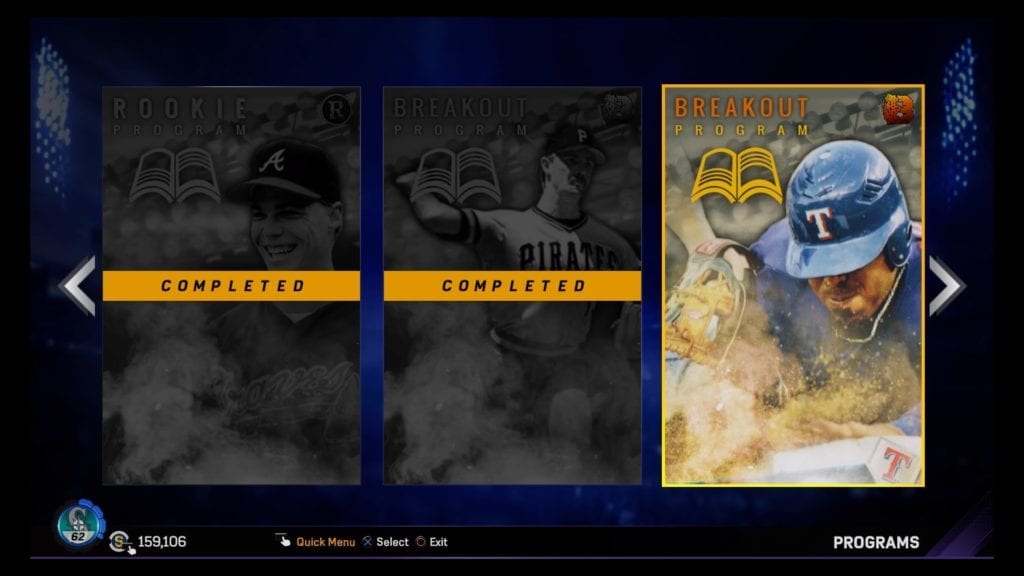 There was a Diamond Dynasty update today that included Sony San Diego giving every user who signed on between 3/28-5/11 10 Standard packs and 11K Stubs. In addition, there was a roster update, the release of the Nelson Cruz Breakout Program, a Mother’s Day Exchange Mission for a Postseason Jose Bautista (90 overall), and the release of various other Breakout cards to help with the Eddie Matthews Player Epic and Nelson Cruz Breakout Program.

The Nelson Cruz Breakout Program has seven parts, with the final goal netting you an 85 overall Breakout Nelson Cruz. Like the other programs, the missions involve all facets of Diamond Dynasty, with the most time-consuming aspect being to hit 33 home runs with Breakout Series players in online games.

The new Bases Loaded pack (limited to 3 per person, 5,000 Stubs per pack) includes a guaranteed Mother’s Day equipment item. You need 15 of those to get the Postseason Jose Bautista. I recommend just buying these 15 items individually, as right now each one costs less than buying a single pack, and you just need 15 items (they don’t need to be unique) in order to get the Bautista.

In terms of the roster update, here is a list of the players that moved up and down various tiers. I will also note that Jake Arrieta dropped from a 92 to a 90, and Chris Sale jumped up from a 93 to a 95.

Lastly, here is a list of new cards that have come into the Marketplace as of today:

Again, these Breakouts are more options to potentially use for the Nelson Cruz Breakout Program. In addition, you need 50 unique Breakout items to complete the Eddie Matthews Player Epic, so these could help with that as well.