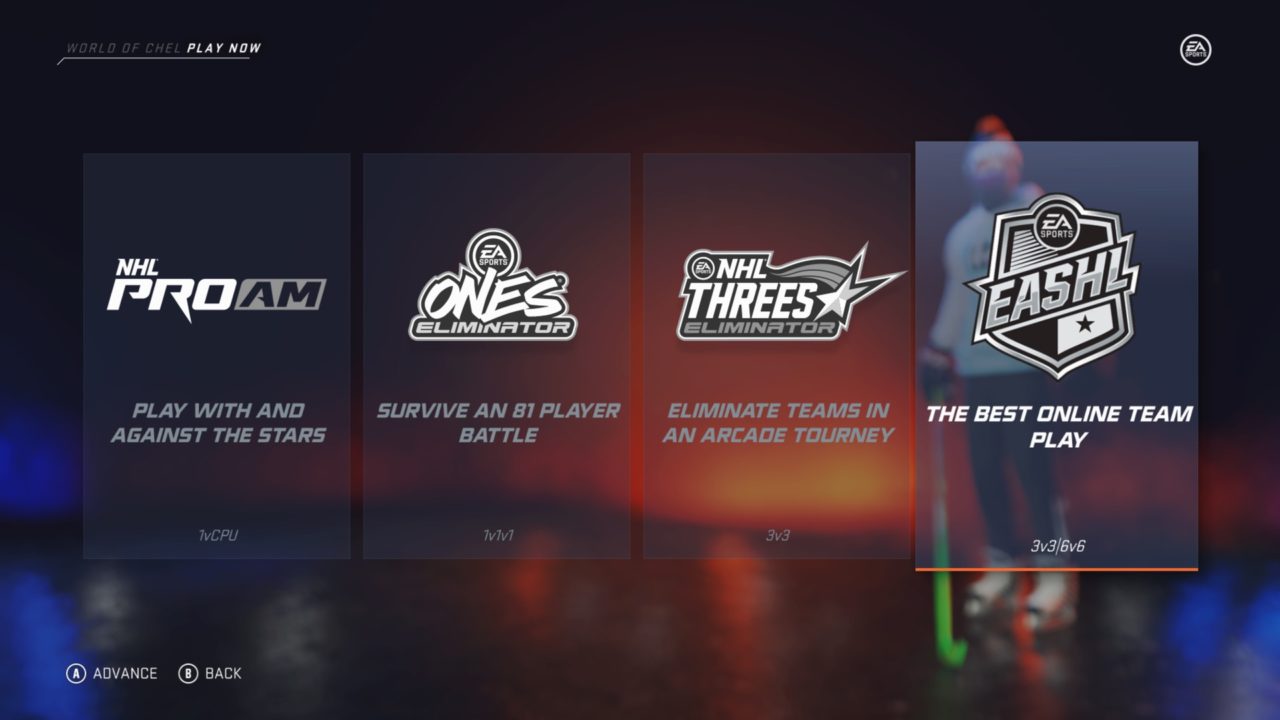 Welcome to your virtual online career. This is EA NHL’s World of CHEL.

In the age of multiplayer video games, no sports game offers quite as exhilarating and downright addictive of a mode as EA NHL’s EASHL. Since NHL 09, EA has given players the ability to team-up in groups of two to six using your own “virtual pro” and go toe-to-toe with an opposing team. Starting in NHL 19, EA re-branded the online multiplayer mode to “World of CHEL” (WoC for short) and added more ways to play than ever before. This year, EA has expanded on the “World of CHEL” and I’m here to give you a rundown on what you need to know to make the most out of your “World of CHEL” experience. 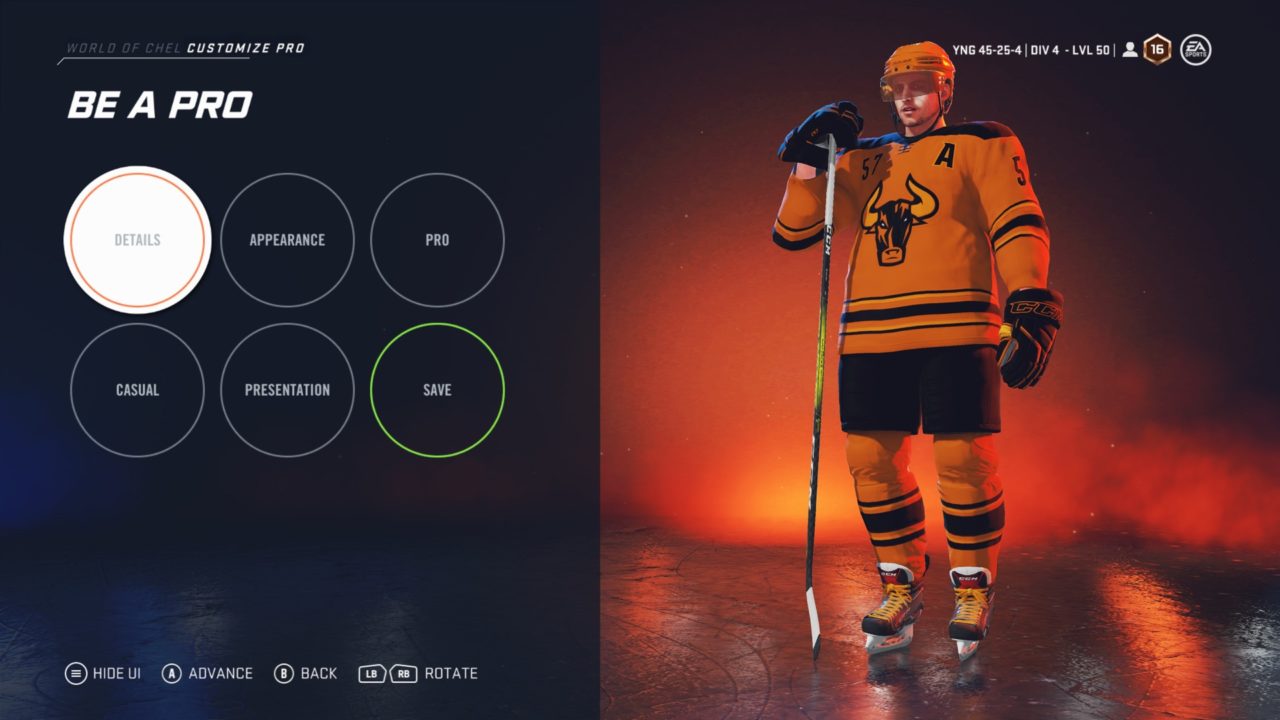 When you first enter the mode, you’ll be taken into a creation zone where you will edit your online avatar. Details and appearance are quite basic and self-explanatory except for the new “signature shot type” option. These animations allow you to pick a unique flair for mainly your slap shot/one-timer animations. These animations are based on real-world superstars such as Alex Ovechkin who have a signature follow through compared to other players. While this isn’t game-changing, it’s a subtle feature that offers a little more variety to make your avatar truly unique.

Once your vitals and appearance are configured, the next thing to do is configure your three equipment styles. The menu circle labeled “Pro” will be your equipment preferences when competing in official EASHL club games. Pro equipment is also worn when you play “Threes Eliminator” mode as a club. You’ll also see that you have a “Home” and “Away” top choice that is used in modes where there are two teams like drop-in Threes, Pro-Am, and Threes Eliminator. (Note: 6s drop-ins use generic white and black sweatshirts so your top choice is not used for that game mode.) Every equipment choice you make in the casual loadout minus the top will be global across all non-club match modes. 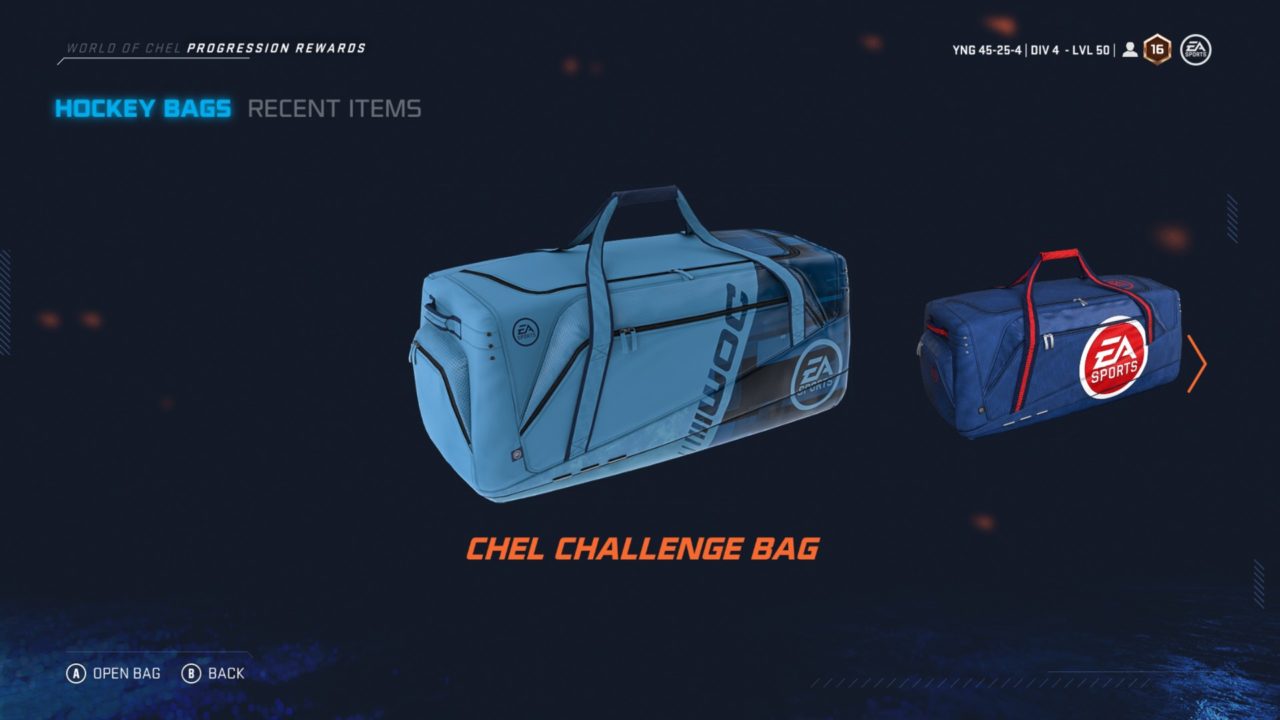 Lastly, you’ll see options to edit your audio and visual “flair” to make your character more unique. There are hundreds of options for audio lines that trigger for huge hits and goals. I notice these lines more when playing drop-in modes as the game mode itself has less background noise. All sounds, equipment pieces and celebrations can be unlocked via “hockey bags” that you receive for simply playing WoC. Each level you’re rewarded with a bag, and you can also earn specific bags with specific rewards for winning matches in modes like the “Ones Eliminator” mode where you’re given a special hat and jersey to recognize your prowess in the mode.

Now that we’re all geared up and ready to play, let’s dive into the modes so you can play the right game mode for you.

Pro-Am is the only single-player experience WoC has to offer. Your virtual pro and three other current/former players are taken into a match to play the featured pro (Valtteri Filppula in the first challenge) and his team. Each game has certain objectives to reach (some simply winning the game) and is a no-rules game mode. I didn’t get much out of this mode as it’s a single-player experience with no sliders, no custom rosters and vanilla gameplay, but it could be a great resource for newer players who want to improve their skills before taking their talents online.

The Ones Eliminator mode pits you in a tournament with 80 other players (27 games of 3 users each) with the ultimate goal of winning the tournament. This battle royale mode is a great way to pass time waiting for teammates to log in, win extra hockey bags for more customization options, and to learn how to effectively protect the puck from users and try out new dekes/techniques when it comes to getting around human opponents. The mode is a free-for-all format, meaning there are no teams. Each game is 1-on-1-on-1 with a CPU goalie attempting to keep the puck out of the net and there are no rules whatsoever. This is the mode where you can take runs, spam poke check and check from behind to your heart’s desire. Rounds last three minutes and whoever scores the most goals at the end of the period wins. If two players are tied, the game will go to a hard-cap OT where the first person to reach the tied player’s goal amount +1 wins the mode. This means that third place can still win the game if they score enough consecutive goals so don’t quit if you’re down.

Understand The Scenario And Practice

Speaking of being down, players can pass to each other and score off of each other’s rebounds so if you and an opponent have a mutual enemy in the leader, you can team up in an attempt for one of you to tie the score to force the hard-cap OT. This is easily one of the most casual game modes offered as it’s a no-rules mode with fairly dumbed-down goalies in-order to prevent games from finishing 1-0-0. This mode is a great way to practice the Defensive Skill Stick mechanic (RB/R1 + RS movement) as you can wildly swing the stick around without fear of taking penalties. If you use this as an advantage and practice using the tool appropriately rather than spamming it, you should start to notice your precision and control with the stick to exponentially increase. This is also a great mode to learn how to use the back-skate mechanic (LT/L2) with the puck as this is one of the best ways to protect the puck and keep poke spammers at bay in EASHL club games and drop-in games.

Three players per side, CPU goalies on both ends, no rules, extremely fast paced and very little defense. If you’re looking for a game that’s reminiscent of NHL Hitz, this is your mode. A unique twist found in Threes Eliminator is the “money” puck. Money pucks are randomly generated and vary in value. Money pucks can provide your team with two or three goals or take away goals from your opponent. You can see the type and value of the puck in the upper left-hand corner on the scoreboard. Orange pucks are the “heated up” pucks (exponentially positive) and the blue pucks are the “cooled” pucks. Money pucks will also glow either orange or blue depending on the type during gameplay. Like Ones Eliminator, this mode is very casual so approach it lightheartedly. Casual gear (home and away) is worn in this mode depending on what team you’re on. You can also join the Threes Eliminator as a club, and your club jerseys as well as your “pro” loadout will be worn.

The mode introduced in NHL 18 returns for its third installment. Drop-in Threes is played under the normal competitive slider set, so expect game speed and mechanics like pass interceptions to be back to normal. In Threes, all penalties minus boarding and checking from behind appear to be called. Also, offsides and icing are called as if this were a real-life NHL 3-on-3 OT period. All penalties in this mode result in an automatic penalty shot. Stakes are high when poke checking so be careful. Depending on if you’re playing drop-in or EASHL Club matches, you will either wear your casual or pro loadout. Threes is a nice change of pace if you’re looking to take a break from standard 6-on-6. It also serves as a more competitive way to play club if you only have 2-4 club mates online. As for drop-ins, this is the second-most competitive drop-in mode. Threes provides you with lots of time and space to make decisions. Due to the small number of players needed to start a game, it’s a great mode for full-human lobbies.

This is the flagship mode of the EASHL and the overarching WoC. 6-on-6 EASHL was introduced back in NHL 09, and it remains the top competitive mode when it comes to online team play. EASHL has a very high pace in terms of decision making. The pace will require you to be better on and off the puck than any other mode this game offers. With pass interceptions being so consistent, you will need to play as a team and support the puck to find success in this mode. Hardcore gamers demanding a competitive environment should focus on this mode.

Play drop-in games and network. Do your best to find similarly skilled players and try to form a club. WoC 6-on-6 shines when playing with a team of good, respectful people. For all of the hardcore hockey lovers out there, this mode will be as close to the real thing as you get playing online team play in the NHL series. Sure, there are video game elements that aren’t ultra realistic, but overall it provides the team experience you would except. I’ve spent so many years playing in third-party EASHL leagues due to the team play. The mode is flat-out addicting with a good group of people.

As you can see, EA NHL offers more than enough avenues to play for anyone looking to team up. From casual drop-in lobbies to third-party Game 7s via EASHL club matches, there is no shortage of styles, metas and players within EA NHL’s World of CHEL.

NHL 20 And How You Can Get Great Slider Settings Too
NHL 20 Patch 1.20 Available Now - Patch Notes Here