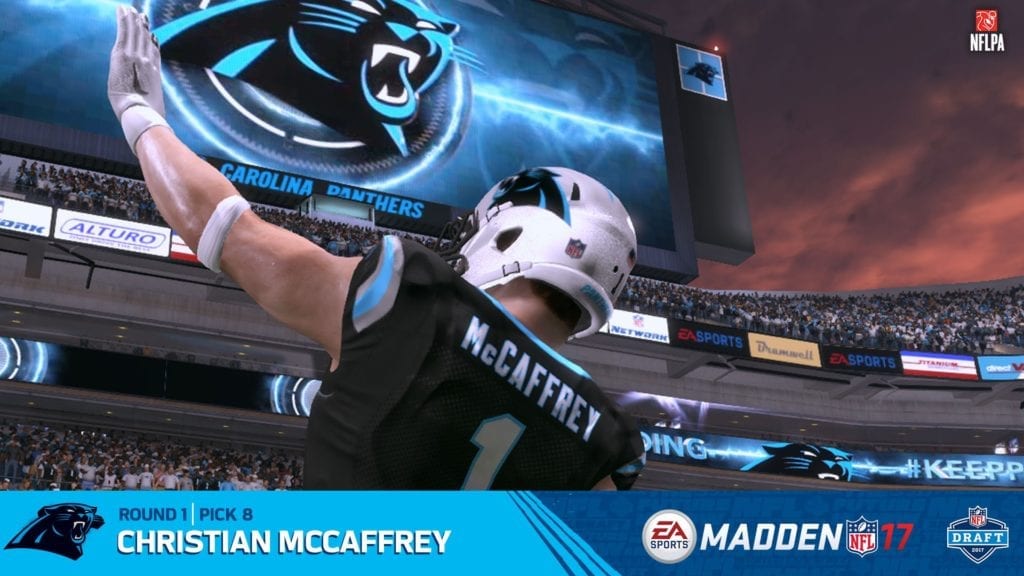 The NFL Draft was a little over a week ago, and the future of all 32 NFL franchises has changed drastically. Whether your favorite team drafted their quarterback of the future, or a pass-rushing defensive lineman, the roster will be significantly different than in last year’s Madden. Here is a look at each team’s key additions in the NFC, and the role they will play in Madden 18. If you missed the AFC, click here.

Taco Charlton was one of the better edge rushers in this year’s class and possesses a swim move that makes life difficult for opposing offensive linemen. In the second round, Dallas upgraded their secondary by drafting Chidobe Awuzie, a versatile corner who can play both inside and outside. Awuzie will likely start immediately and become a difference maker in Dallas’ secondary. Jourdan Lewis is no slouch and should develop nicely in Madden. Ryan Switzer is a play-maker in the slot, and will be a nice addition to Dak Prescott’s weaponry. Switzer runs crisp routes and will cause fits in Dallas’ offense.

The Giants’ draft on paper is a bit of a letdown. Tight end Evan Engram has the skills to do it all at the next level. He’s more of a big-bodied wide receiver, and will be fun to use whether in the slot or on the outside. Dalvin Tomlinson is a traditional defensive end who plays great against the run. New York drafted Davis Webb as a developmental quarterback and could have a successful career once Eli’s time has passed.

Derek Barnett was great value for the Eagles at 14. He’s a skillful player that has a knack for getting to the quarterback. Adding him to an already godly defensive line will cause fits for the opposition. Barnett is a pass-rushing specialist, but remains stout against the run. Sidney Jones is one of the draft’s most talented defensive backs, but an injury derailed his opportunity at being a first-round pick. He’s a physical corner who will pay dividends against Madden’s top wide receivers. Donnel Pumphrey was drafted with all intentions of being the Eagles’ running back of the future. His elusiveness should be fun to utilize in this year’s game.

Jonathan Allen was one of the draft’s most versatile defensive lineman, and he fell mercifully into the Washington’s lap. Allen is stout against the run and possesses the skills to successfully rush the passer. Washington also added his Alabama teammate Ryan Anderson to the front seven. Anderson had success pressuring the quarterback, and in Madden you can never have enough of this. Fabian Moreau is a well-rounded cornerback and will help handle the big-bodied receivers in the NFC East. Running back Samaje Perine and Tight end Jeremy Sprinkle are two offensive weapons I look forward to using in Madden 18.

The football world was stunned when the Bears moved up one spot to draft North Carolina quarterback Mitchell Trubisky. Trubisky has all the traits to be a franchise quarterback. He possesses short-yard accuracy and he can sense pressure well in the pocket. Safety Eddie Jackson has the potential to be a playmaker in the NFL. Unfortunately, an injury forced him to miss most of the 2016 season. One thing is certain, the Chicago Bears will be an intriguing team to use in Connected Franchise mode.

Detroit added speed to its defense, drafting three-down linebacker Jarrad Davis. Davis is above average versus the run, and has the speed to get to the quarterback. Teez Tabor, another Gator, was drafted by the Lions in the second round. He’s a play-making cornerback who has the traits to be a shutdown corner in the NFL. Michael Roberts is an underrated tight end, and will be a hefty red zone target for Lions’ fans everywhere. Brad Kaaya is still raw, but could eventually be the heir to Matthew Stafford.

The Packers greatly improved their defense, primarily in the secondary. Kevin King is a big corner who moves extremely well for his size. King has the ability to shutdown opposing wide receivers and should be a cornerstone of the Packers’ defense for years to come. Josh Jones is good against the run and makes game-changing plays in pass coverage. Montravius Adams is one of the draft’s best pass-rushing interior defensive lineman and will pay dividends inside for the Packers. Lastly, Wisconsin linebacker Vince Biegel had a very good career with the Badgers. He will be an asset attacking the quarterback in Madden 18.

After the departure of Adrian Peterson, the Vikings needed a running back to carry the workload. Minnesota landed speedster Dalvin Cook in the second round, and he is primed to be the Vikings’ starting running back come September. Cook possesses elite speed and elusiveness that will make him fun to use in Madden 18. With the addition of Pat Elflein and Danny Isidora, it should make life a lot easier for the Vikings’ run game. Bucky Hodges isn’t the best run-blocking tight end but will create mismatches in the passing game. The Vikings should be a fun team to use in this year’s Madden.

The 2016 NFC champions moved up to select Takkarist McKinley, one of the best edge rushers in this year’s draft class. McKinley has the speed to get to the quarterback, and opposite of Vic Beasley, could make the Falcons’ defensive line one of the best in Madden. Duke Riley is a sure tackler and should improve the middle of Atlanta’s defense. Lastly, Damontae Kazee is a very good corner who will make an impact as a nickel cornerback. The Falcons defense got even better in this year’s draft.

Christian McCaffery is probably one of the players I look forward to playing with most in Madden 18. His rare combination of speed and intangibles allows him to excel as both a rusher and pass catcher in Carolina’s offense. Using him in the read option alongside Cam Newton spells trouble for opposing defenses. His route running is second to none, and he’s one of the top receivers in this year’s class as well. Curtis Samuel gives the Panthers another offensive weapon and should be a fun player in this year’s game. Taylor Moton helps the Panthers’ offensive line, while Daeshon Hall adds a dynamic pass rush to Carolina’s defense. Lastly, Miami cornerback Corn Elder will improve the secondary, primarily as a slot cornerback.

It was clear the Saints wanted to draft Patrick Mahomes, but the Chiefs moved up and took the big-armed quarterback. Fortunately for the Saints, shutdown corner Marshon Lattimore was still available. Lattimore may be the draft’s best cornerback, and his skill set is something New Orleans desperately needs. Ryan Ramczyk helps improve the Saints’ offensive line, one they hope Alvin Kamara can have great success behind — New Orleans has a ton of weapons offensively. Lastly, linebacker Alex Anzalone and edge rusher Trey Hendrickson help improve a defense that struggled in 2017.

O.J. Howard is the best tight end in this year’s draft. He’s got a similar skill set to Rob Gronkowski and is a much needed red-zone target for Winston. Howard will create favorable mismatches and should be a reliable target all throughout. Chris Godwin is a big playmaker that adds another weapon to the Buccaneers’ offense. Justin Evans is a play-making safety who has all the intangibles to be a playmaker in Tampa’s defense. In addition to Evans, Kendell Beckwith is a force against the run and will likely start early for the Bucs.

It appeared the Arizona Cardinals had interest in quarterback Deshaun Watson — that was until the Texans traded up to get the Clemson quarterback. Good thing for Houston, Temple linebacker Haason Reddick was still available. Reddick is a versatile linebacker who can rush the passer from the edge or cover in the middle. Budda Baker is another nice addition to Arizona’s defense, and fits nicely alongside Honey Badger. Baker has the ability to cover in the slot, and will be a key part of the Cardinals’ defense moving forward. Dorian Johnson is a solid run blocker who will open up holes for Pro Bowl running back David Johnson. However, Johnson must improve in protection. T.J. Logan adds another dynamic to Arizona and could get some carries, decreasing David Johnson’s workload.

After trading up for Jared Goff in 2016, the Rams were without a first-round pick. So when they were finally on the clock in the second round, they desperately needed to add offensive weapons. Tight end Gerald Everett is more of an H-back and another weapon users can look forward to utilizing in Madden 18. Wide receiver Cooper Kupp is best suited in the slot and will make life easier for those who choose to use the Rams. John Johnson is a sure tackler in the secondary, and Tanzel Smart is efficient in the run game. He’s also very good at rushing the passer and should help improve an already godly defensive line.

There was Myles Garrett and then there was Stanford’s Solomon Thomas. Thomas was the best run defender in this year’s draft, and he continues to improve as a pass rusher. It’s crazy to think San Francisco traded down and still got the player they coveted most. Speaking of which, the 49ers were able to land Reuben Foster, one of the most talented players in this year’s draft. Injuries and off-the-field issues forced him to fall, but San Francisco was able to land their linebacker of the future at 31st overall. If Foster can remain healthy, he will be one of the best linebackers in Madden 18. In the third round, the 49ers landed a potential star in cornerback Ankello Witherspoon. He had a great combine and possesses the size to be a shutdown corner in the NFL. The 49ers are a team that will be very fun to play with in Madden 18.

The Seattle Seahawks traded back five spots with the Atlanta Falcons. In doing so, they were able to land Michigan State defensive tackle Malik McDowell. McDowell is able to play both outside and inside in Seattle’s complex defense. He’s great against the run and able to rush the passer from the outside. He’s a skilled player that will be fun to utilize in Madden 18. In addition to McDowell, the Seahawks added Ethan Pocic. Pocic is able to play all over the offensive line but excels at center. He is an asset in both the run and pass game. Lastly, Shaquill Griffen has great size and talent to be a welcomed addition to the Legion of Boom. Seattle had a good draft, and the team should be greatly improved in Madden 18.

How did your favorite team do in this year’s draft and what players are you most looking forward to using in Madden 18?

How the 2017 NFL Draft Changes Each Team in Madden: AFC
The Madden NFL 18 Hype Train is Ready to Begin...