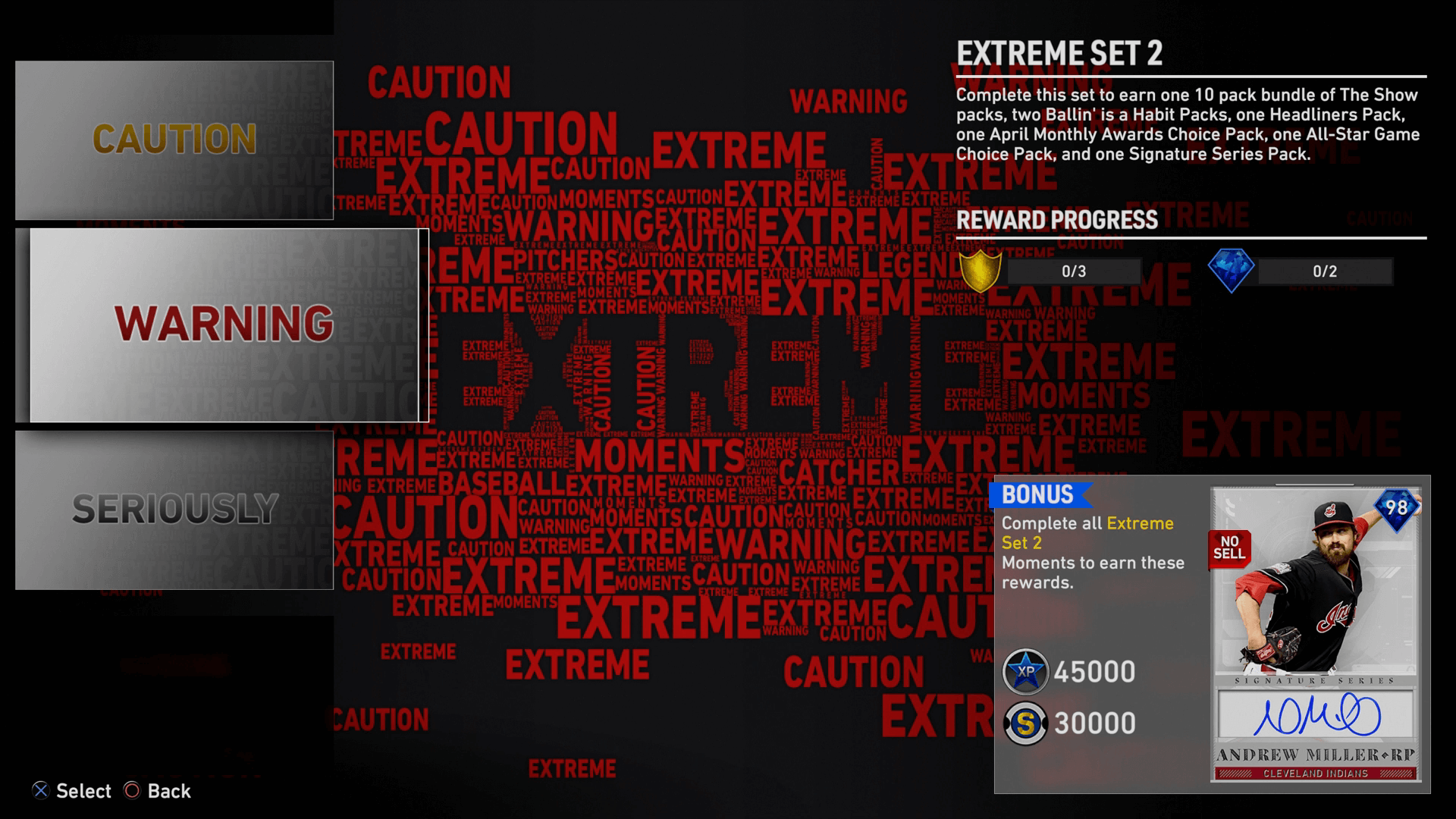 The introduction of Daily Moments in MLB The Show 21‘s Diamond Dynasty has been a welcomed new feature to the mode, giving players an opportunity to collect rewards simply by logging in every day and completing what is typically a relatively simple challenge. Ranging from collecting a single hit during the course of a game while player locked as someone on the easier end of things to having to win a 3-inning game against an opponent on the more difficult side of the spectrum, these all can usually be completed within about 15 to 20 minutes at most.

By completing these challenges every day, you’ll earn a number of points (usually only one but sometimes two) towards the monthly Daily Moments program and collect different rewards for every few points or so that you progress. These are mostly things like stubs and packs in the early stages, but the ultimate goal for each month is to collect a diamond player card, which can be reached currently in the June program at 25 points. The cards have thus far all been players who would likely be valuable additions to any squad, whether as starters or clutch bench performers, including slugger Gary Sheffield last month and lefty reliever Zach Britton this month.

But what can people do if they happen to be busy for a couple of weeks during a month or perhaps there are more casual players who just aren’t able to log into the game often enough to accrue those 25 points? As it stands now, they’ll likely have to be content nabbing those smaller rewards in stubs and packs, and lament the fact that they can’t play the game as much as the Daily Moments program demands.

But what if there was another way?

In the past, Diamond Dynasty has featured more extreme challenges within the single-player Conquest mode that players could tackle to try to obtain some nice rewards in exchange for taking on some especially difficult tasks. The same has been true for specific moments that were cultivated to drive folks batty. There’s really no reason why MLB The Show 21 couldn’t now use something similar within the Daily Moments program by having people attempt to collect a greater number of points for completing some tasks on the field that will take more time and effort.

This way the players who don’t have the same amount of time as others can still have the ability to grab those coveted player card rewards, while hardcore grinders who insist on doing absolutely everything within the program can perhaps earn some additional packs by compiling points beyond that player card reward.

Here are some examples of what these Extreme Daily Moments could look like and what the point reward might be for each one of these daunting tasks:

Let’s start with a moment that isn’t all that much harder than a typical Daily Moment that you might encounter, and therefore it would only be worth slightly more than a usual one at three points. In this moment, you would be player locked as the Yankees’ formidable former closer Mariano Rivera as he takes the mound in the 9th inning to do what he does best in shutting opposing hitters down and preserving a win. But this is one of the tougher saves that Rivera will ever earn as he is entering the game with a one-run lead, the bases are loaded and there is nobody out. The task is straightforward enough: get three outs without allowing a single run to score, and you will receive those three points towards the Daily Moments program.

A recent Topps Now moment highlighted a pitcher’s immaculate inning in which he threw nine straights strikes to quickly strike out the side in a special feat of dominance. However, the actual Moment only required you to pitch a perfect inning rather than a true immaculate one, so you could throw a ball or two or get an out from your defenders rather than leaning only on the strikeout. This Extreme Daily Moment in which you’re player locked as your created Ballplayer (or maybe someone like Jacob deGrom if they want to make it a tad more manageable) wouldn’t let you off quite so easy.

In a famous play that proved just how gifted and versatile the two-sport phenom Bo Jackson was as a baseball player, the outfielder somehow cut down the speedy Harold Reynolds at the plate with a pinpoint laser throw when Reynolds tried to score from first on a double in extra innings. This Extreme Daily Moment would see you trying to replicate that incredible frozen rope with you player locked as Jackson in left field as you field an extra base hit (which could come at you in any direction to keep things interesting).

A moment that lives on forever in Red Sox lore is when Carlton “Pudge” Fisk won Game 6 of the 1975 World Series with a home run in the bottom of the 12th inning that struck the left-field foul pole. The image of him attempting and succeeding to wave the ball fair has become iconic and even played a significant role in the emotional development of a certain Will Hunting. Here in this Extreme Daily Moment you’ll be tasked with trying to do exactly what Fisk did and that means simply hitting a home run just won’t cut it as that ball needs to actually strike the left-field foul pole just as Fisk’s did in order to earn any points for this moment.

Any time a pitcher is able to hit a home run in a game, it’s considered a pretty rare occurrence worth celebrating (unless of course that pitcher’s name is Ohtani), but it’s somehow even more special when it’s done by someone with the, shall we say, athletic physique of Mr. Big Sexy himself, the ageless wonder Bartolo Colon. Of course, Colon only managed the feat once in his long career. In 2016 with 225 at-bats under his belt, he finally took a James Shields pitch over the left-field fence. You’ll be trying to get that same lightning to strike twice in this Extreme Daily Moment while player locked as Colon, and you’ll be forced to overcome his low vision and power attributes to make that perfect contact required for Big Sexy to launch the ball out of the park. And, yes, I know this challenge was in The Show once before, but this time he won’t get slightly boosted ratings to try and pull off the homer — because I want to suffer.

Around The World With Rickey Henderson – 8 points

There’s no doubt about it: Rickey Henderson stole a lot of bases over the course of his career (1,406 to be more precise), even managing to swipe home a total of four times. You’ll be asked to harness the speed of Henderson in this Extreme Daily Moment and unleash all of it on the basepaths by stealing all of the bases in one trip. Once you’ve nabbed third base, prepare for the toughest challenge any speedster will face by timing up the pitcher’s delivery perfectly (don’t worry, he’s a left-hander to make it easier) and shocking everyone by darting home before the ball arrives in time. If you get thrown out at any of the bases, then it’s back to first base to start all over gain.

The Inside The Park Home Run – 9 points

Fans may love the long ball, but what’s more exciting than a home run where the ball doesn’t even leave the park? Sure, it’s fun to watch someone trot triumphantly around the bases, but a player frantically circling them all while the defense desperately tries to get the ball back into the infield to prevent him from coming all the way around to score is much more exhilarating. Now’s your chance to live that thrill in this Extreme Daily Moment by keeping the pedal to the metal no matter what and not stopping until you’re tagged out by someone. You’ll need a perfectly placed ball into the outfield and the right amount of ineptitude by the fielders without them actually making an error in order to accomplish the feat, and it might take a lot of attempts but it will be worth it for those nine valuable points.

A rarity in the sport of baseball, the triple play is a special occurrence that won’t be easy to pull off, but you’ll be rewarded with plenty of points once you’re able to complete this Extreme Daily Moment. Your opponent has runners on first and second base with nobody out, and you have to figure out the best way for you to get three outs on a single play, which will be made even harder by the fact that the AI doesn’t really make many dumb mistakes like humans sometimes will. Your best bet will probably be to field a grounder at shortstop, tag out the runner heading to third, flip to second for the force there and then throw to first hopefully in time to beat the batter.

Only 18 players in the history of Major League Baseball have managed to hit four home runs in one game, so that kind of unique accomplishment demands to be an Extreme Daily Moment that’s worth quite a few points. Since the last person who managed to pull it off was J.D. Martinez in 2017, let’s have you player locked as him for this moment and maybe you can re-live that moment in time when he was with the Diamondbacks and playing against the Dodgers. Chances are that you’ll probably only get four at-bats to hit those homers, so you’ll likely need to swat a dinger every time at the plate. However, you could always get lucky and get a fifth or even sixth at-bat in a high scoring or extra innings game.

The Perfect Game That Wasn’t – 15 points

In a moment that will reside forever in baseball infamy, Armando Galarraga was robbed of a perfect game in 2010 when first-base umpire Jim Joyce clearly blew a call with two outs in the ninth inning and deemed a runner safe when he was most definitely out. Here’s your chance to right that egregious wrong by pitching a perfect game while player locked as Galarraga. Obviously, this is going to be hardest Extreme Daily Moment that you will face, but the reward reflects that by offering you the number of points that you would normally accumulate over the course of two weeks. Granted, it may take quite a few attempts and a lot of frustration to notch that perfect game, but if you were out of town for a period of time in the month and have since returned, your efforts could really help you catch up to everyone else.