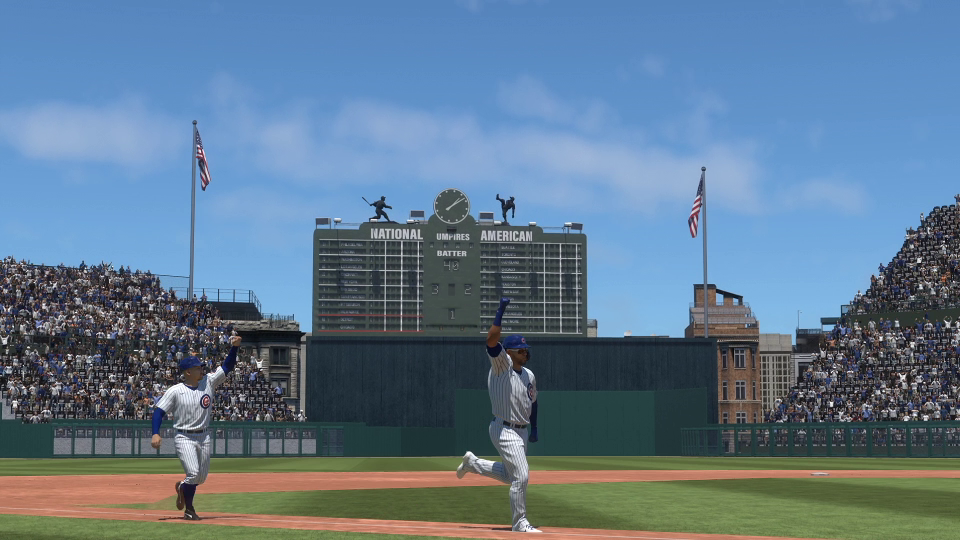 Considering how long fans of MLB The Show have been clamoring for a stadium creator, it’s not exactly surprising seeing the creativity the community has already showcased with this new feature. The number of amazing stadiums people have designed and shared is even more of a feat when you remember that the stadium creator is only available to people who have next-gen consoles. However, until a recent patch there was no search functionality to easily find all of the stadiums people were creating. But since that’s no longer an issue, I wanted to go over 10 community-created stadiums in MLB The Show 21 that are worth checking out.

From faithful re-creations of beloved parks that have long since been demolished to wild fantasy parks that no city planners would ever possibly approve, there are already plenty of options out there. It’s also appreciated that you’re able to save up to 30 stadiums, giving you the opportunity to customize ballparks for every single team in a franchise and really put your own stamp on a league. One can only hope that this is something that might end up being possible in online custom leagues (or online franchises if they ever give us that mode back again) in future editions of the game.

It’s still very early in the game’s cycle and there are bound to be a lot of other fantastic stadiums created by the community over the coming months, but we thought we’d dip into some of these initial designs and highlight some of the better ballparks, both real and fictional, that we’ve seen so far. 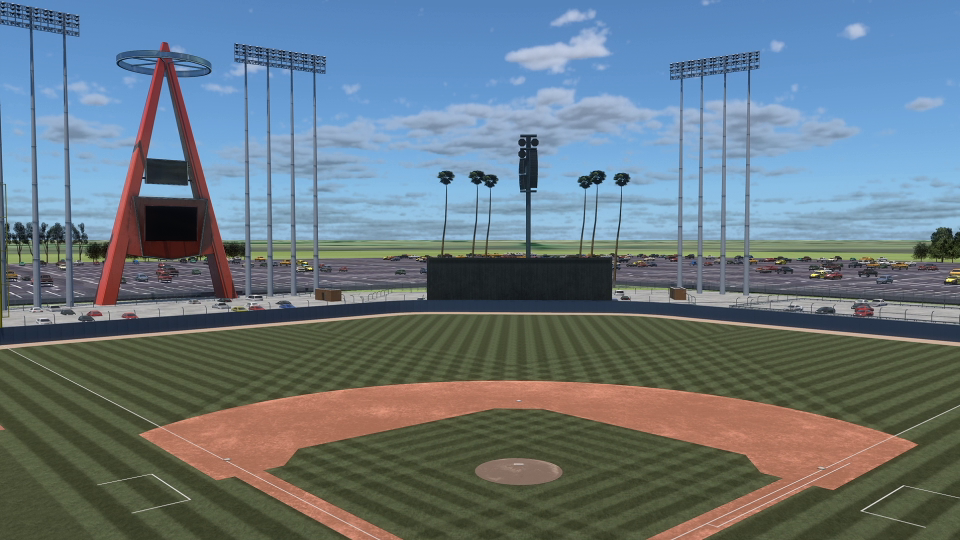 The Reddit user Seaversheets15 deserves a shout out for creating a bunch of great stadiums that you can find by searching his username, including many impressive replicas of bygone stadiums. One of these takes you back to Anaheim Stadium in the ’60s when the home of the Angels was first opened. Far from the modern park it is now, the stadium has an unseemly parking lot beyond its outfield walls instead of bleachers, but you can’t help but love that gigantic “A” in left field that makes it unmistakable as to which team plays here. 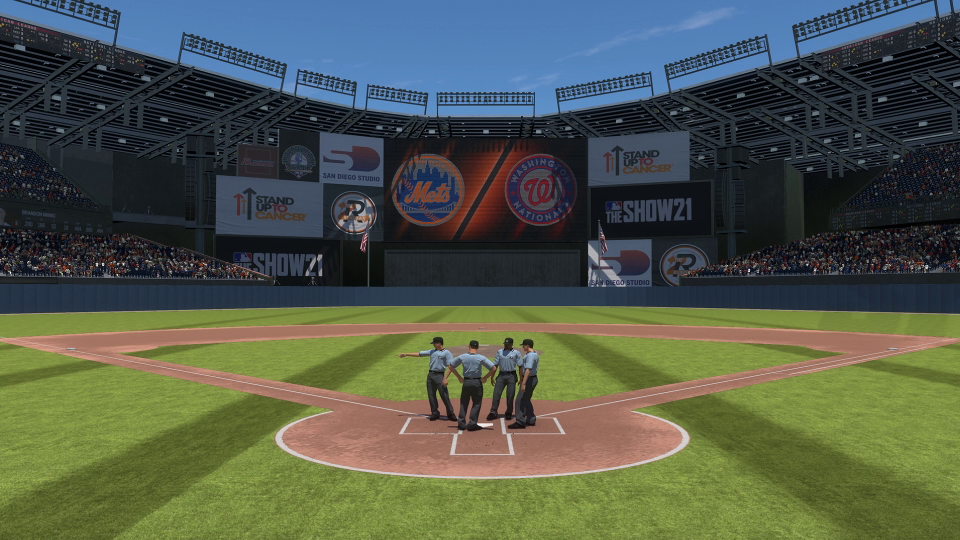 One of the drawbacks of the stadium creator in MLB The Show 21 is that, in its first year of being in the game, there’s currently no way to design a stadium that has a dome overhead. But that has not stopped people from attempting to present classic stadiums that had a dome in real life in a form without a roof, such as Seattle’s old Kingdome.

A stadium along those lines that’s near and dear to my heart as someone who grew up an hour from Montreal and went to Expos games regularly is Olympic Stadium — and there are already quite a few different versions of it that have been created by the community (hint: look for the username of our own writer bluengold034 or MeAndBettyWhite for some good ones). They may not have been able to re-create the stadium’s roof but, given how many issues the team had over the years with that cursed thing anyway, it might be better off to just not have to worry about it at all. At the very least, designers have captured the spirit of the building enough that you almost expect to see beloved mascot Youppi roaming the stands during games. 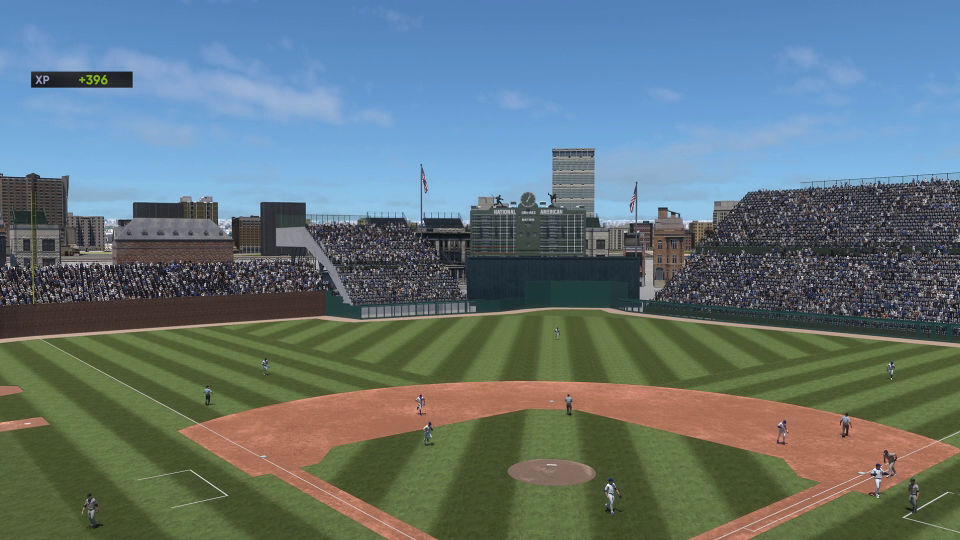 The home of the Cubs, Chicago’s Wrigley Field is no doubt one of the most iconic stadiums in baseball and perhaps even in all of sports. With its ivy-covered outfield walls and storied history, Wrigley has a lot going for it. For anyone seeking a closer look at that history, this is a chance to journey back in time to play games at a more primitive version of Wrigley (search for username FerrisBueller1), complete with old-fashioned grandstands and some funky dimensions to contend with in center field. Of course, don’t expect to find any lighting rigs (not that you you can play night games at created stadiums anyway) or fancy newfangled scoreboards here. 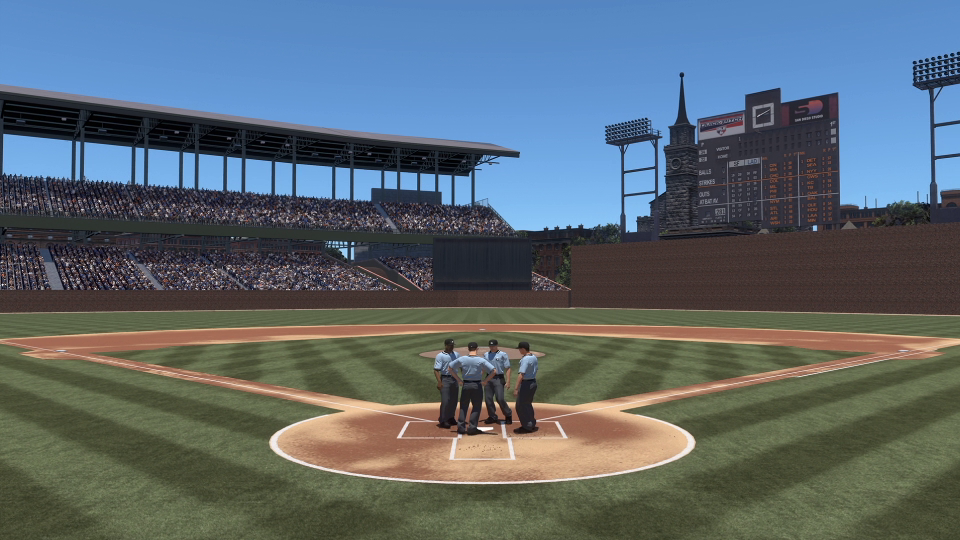 Many believe that a piece of Brooklyn died when the Dodgers left town, so now community creators have naturally tried to restore that piece by building their own Ebbets Field (which you can find along with a whole bunch of other nice stadiums under username swatkins1978). This is another one where there are plenty of versions out there in the Vault, and nearly all of them have the trademark grandstands down pretty well. However, the better ones stick to a higher wall in right field and an old-timey scoreboard instead of an anachronistic digital one that wouldn’t have existed back when it was the home of the Dodgers. 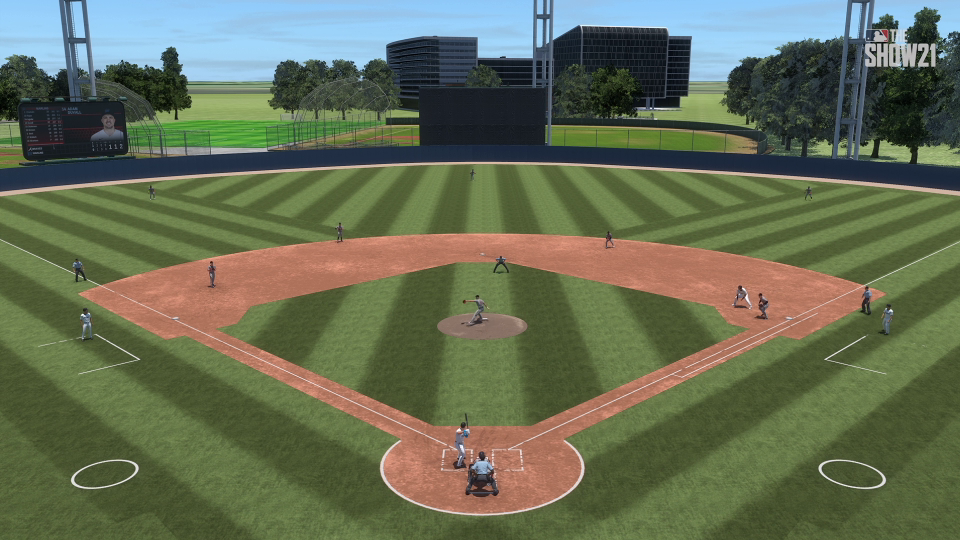 There are plenty of real MLB parks, both old and new, that people have digitally built in MLB The Show 21. But for something a little different, check out this quaint park surrounded by other ballfields in the Netherlands that OS user cbolavirus31 created. It’s not the fanciest ballpark you’ll ever find, but it’s clear that someone was attempting to lovingly craft a tribute to a stadium they had a personal connection with as a kid, and you have to think that’s exactly what developers had in mind when they introduced the stadium creator feature this year. 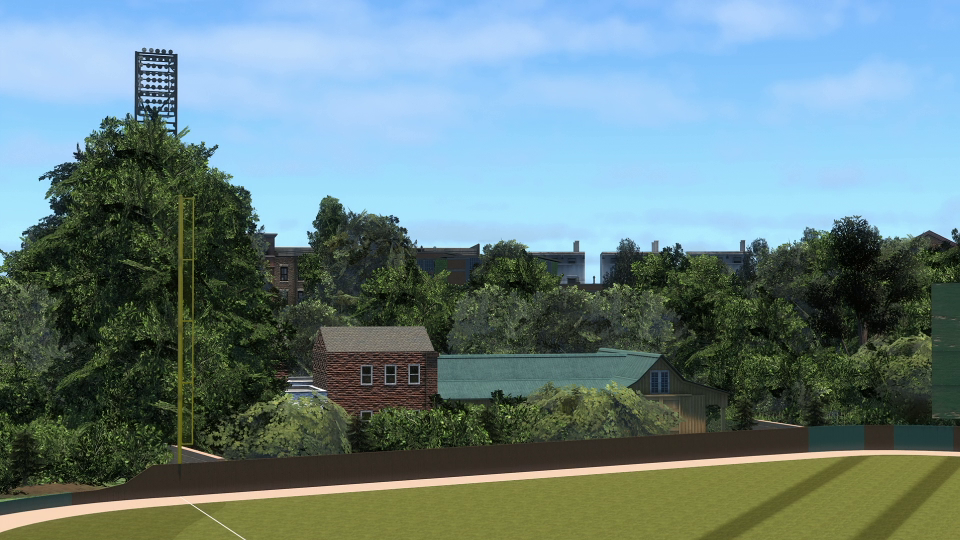 Are you a fan of the classic baseball flick The Sandlot? Have you fantasized about stepping on that field with that unforgettable group of kids to play a few innings? Well, now’s your chance thanks to this wonderfully nostalgic creation that manages to bring that field into MLB The Show 21 so you can have anyone you want competing on it. Remember to be careful of the house lurking out in left field and, even though you won’t be able to see him, you can be sure that the giant dog they call “The Beast” is somewhere behind that fence waiting to pounce.

Credit to Reddit user kasabe (search username kasabe_ in-game) for not only creating the stadium, but making this amazing video of The Sandlot character Ham Porter (and others from the movie) returning to his old stomping grounds. 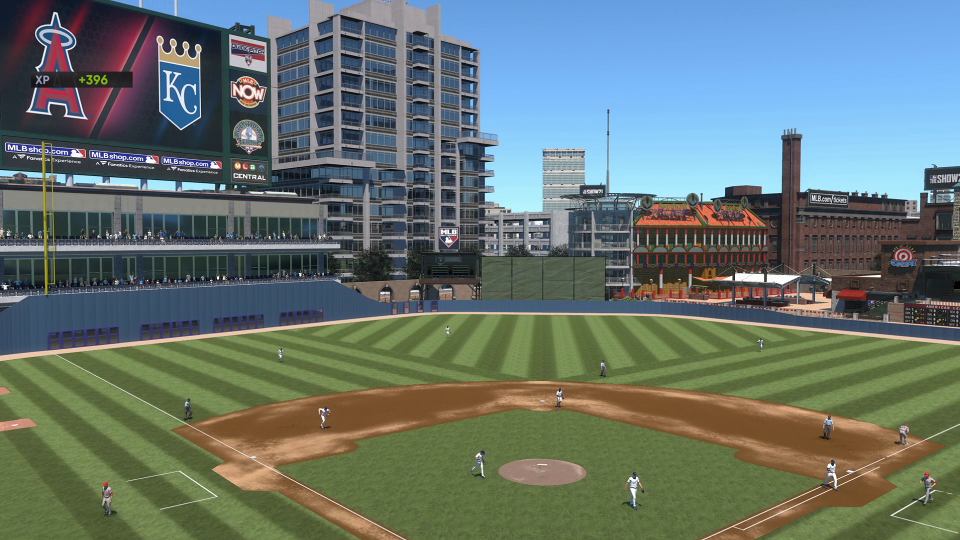 A lot of fictional stadiums created by the community are mere fantasies that would be difficult — if not nearly impossible — to realize. However, Arcadia Park (search username tapdanceTom) is different in that it feels like it could be a real stadium in a city and, if it were, it’s likely that it would be very popular. There are so many neat details at this ballpark, starting with the wraparound concourse that sees people standing to watch the game from left field. There’s a nearby Boardwalk Arcade that gives the stadium its name, an apartment complex with balcony spots that must have the best views of the game, a Hit It Here Cafe, and a cool space needle hovering above it all from within the urban sprawl surrounding this baseball wonder. 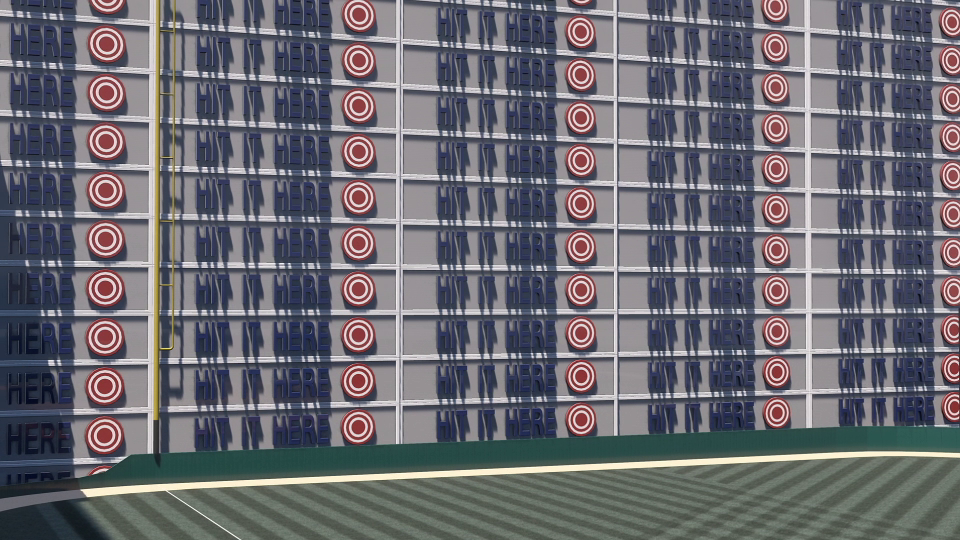 Okay, so this is hardly the most complex design or anything, but sometimes brilliance comes from the simplicity. That’s the case with this stadium that has nothing but stacks upon stacks of Hit It Here billboards lying beyond the outfield walls. While this obviously isn’t the most fan-friendly park given the lack of any seating — on account of all of the space being occupied by those billboards — it’s sure to satisfy anyone who has really wanted to have a home run hit one of the billboards because there are certainly plenty of them to hit here. 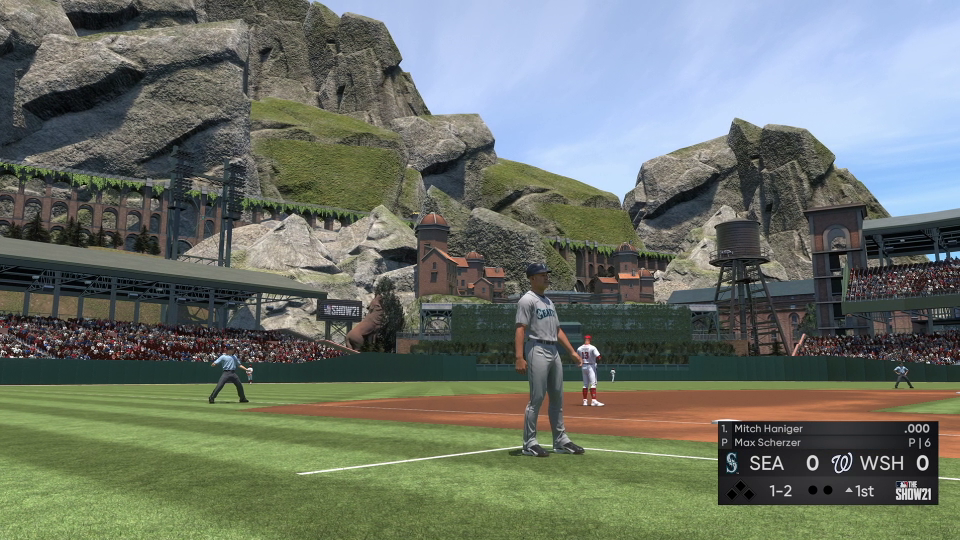 Some of the best fictional stadiums that you’ll find in the vault are ones that are able to transport you to places that could probably never exist in real life. Their gorgeous vistas are things I dream about being around while watching a ballgame. Such is the case with Mount Gonner (created by a Reddit user with username roogwitadoog in-game), which forgoes some seating in favor of a tremendous view of a grassy cliff-side and all sorts of attractive props beyond the outfield walls. 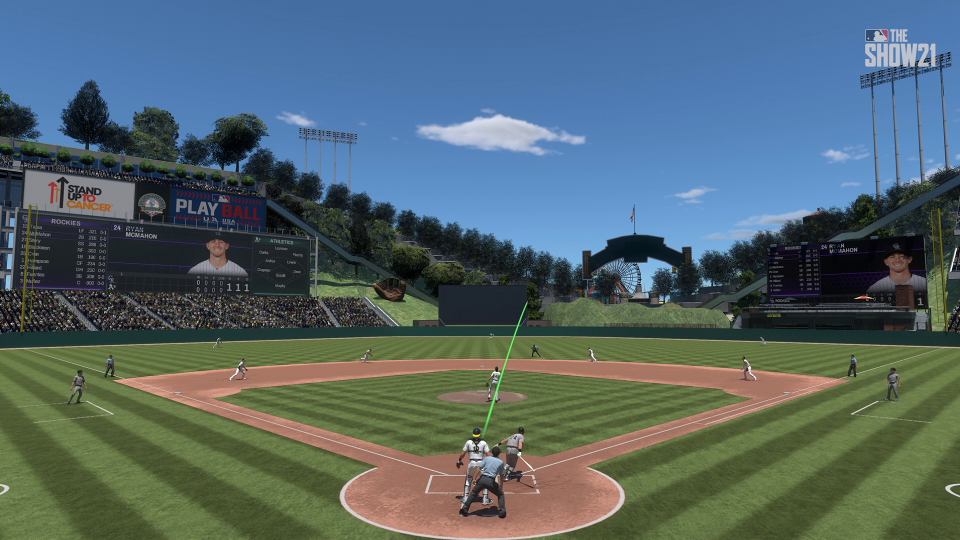 The final stadium I want to highlight straddles the line between real and imaginary. One of the more interesting categories of community creations out there relates to proposed real-life ballparks that have not yet been built. This category gives us the chance to see what the fields might look like when games are played there without actually needing to break ground on the site to start any construction. Because of delays due to the ongoing pandemic and some opposition to the proposal, it’s possible that the only way any MLB games are ever even played at Athletics Park at Howard Terminal is in MLB The Show. So it’s best to enjoy this picturesque field next to the pier and think about what could end up as real or just a pipe dream.

For another stadium along these same lines, look no further than Ronsolo412’s other design of New Tropicana Field.