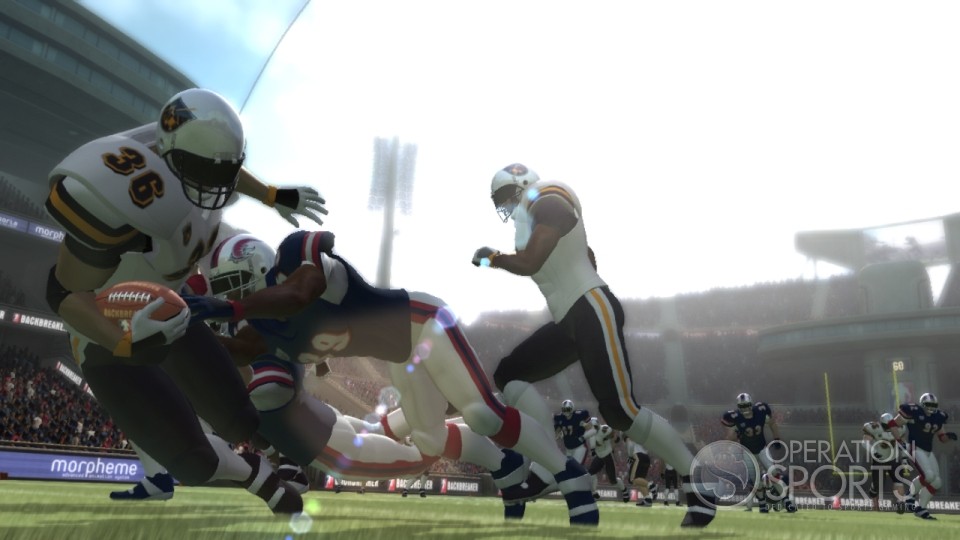 The YouTube Rabbit Hole does not tell me where it’s taking me, and that’s fine by me because I trust in the journey at this point. Stumbling upon Backbreaker at the end of my latest voyage is all the more reason to trust the process when I go down the hole. This re-imagining of Super Bowl 54 in Backbreaker from WildLion Games was enjoyable to have up on my second monitor while doing work because I just had not thought of Backbreaker in years.

So do we have fond memories of Backbreaker? I don’t personally have many fond memories of the game. I loved the Tackle Alley mini-game, and I can see why so many people thought NaturalMotion should get a shot at making a full game since that mini-game is a pure distillation of what’s great about the physics-based tech. It’s fun avoiding oncoming tacklers, and it’s just as fun to watch yourself get destroyed by them. It is an ideal tech demo, and it was a genius way to sell people on the physics.

Backbreaker was seen as a possible answer to Madden in some respects, but it also gave off arcade-like vibes in the lead up. The game was actually incredibly challenging when it came to passing and even running, but that again also flew in the face of thinking this would be a more fun pick-up-and-play experience. So, in effect, Backbreaker was marketed more as an arcade game, but those who ended up loving it the most were the ones who grinded through the learning curve and came out on the other side to appreciate the challenges it offered.

In other words, Backbreaker was a confusing game to judge as an outsider, and it still was not easy to find a consensus on the game even if you played it a bit. The reviews were mostly negative at the time, but even those were not so straight forward because some of the reviews had glowing things to say about the game. It’s just that Backbreaker was so different in some respects — the camera view being zoomed in with no great way to change it, the difficulty spikes — that it was hard to get over that hump.

On top of that, there were just some bad elements that are universally accepted at this point. There were very limited playbooks, there was no real user swat button, the AI had terrible clock management at launch, and the presentation was nothing special. On top of that, while the physics and tackling were and remain the biggest selling points, players did not always run naturally, the football pads made everyone look big and blocky, and some interactions could still look a little odd at times. Still, when the tackling worked out right, man did it feel good to smash someone. Plus, the piles of bodies and even small things like a player reaching out to the goal line with the football when near the end zone were — and still are — really impressive in today’s landscape.

Outside the sports world, NaturalMotion is better known for having their tech in games like GTA IV and Star Wars: Force Unleashed, but Backbreaker is really the most interesting thing they’ve ever been involved in to me.