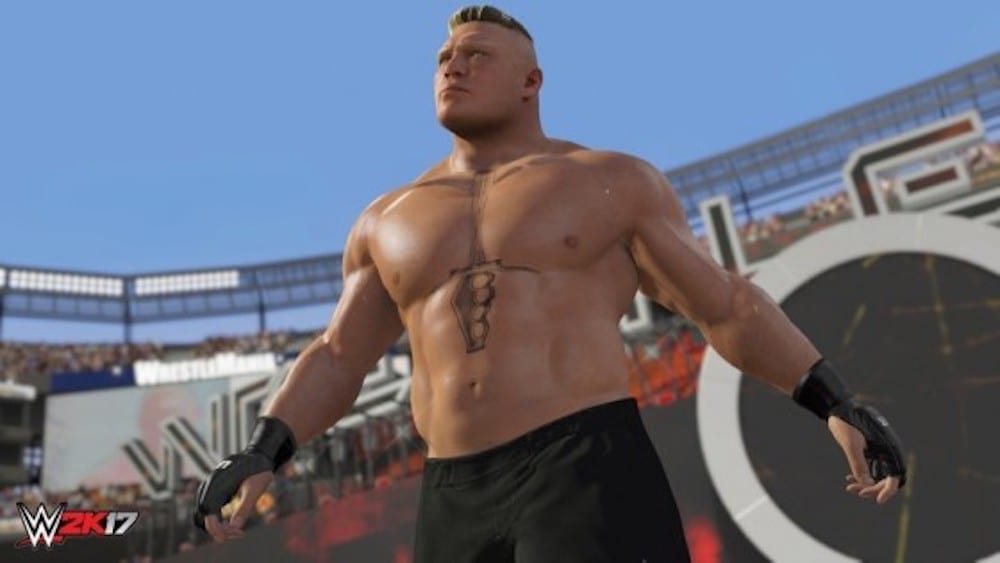 Over the weekend, I had a chance to attend EGX 2016 in Birmingham, UK. During the time I spent at the expo, I got my hands on (what I would assume to be) an early build of WWE 2K17.

I want to make a few things clear before I detail my experiences. First, I didn’t get enough time with the game to make any definitive judgments. Also, I was playing with gamers of varying skill levels, and the game’s audio was particularly tough to hear in the confines of a busy convention. Finally, I only got a chance to experience the game in a one vs. one environment. Multi-person modes were available, but I simply wasn’t able to try them due to a lack of time on the day. It should be noted that I was not attending on press duties, so I didn’t spend as much time with the game as I normally would.

Please keep all of these factors in mind as you read through my impressions. The first thing I noticed were the altered character selection screens. We were greeted by the sound of Shinsuke Nakamura’s theme music as we browsed through the superstars on display, of which there were about 10 in all. Lilian Garcia announced AJ Styles’ name as I picked him, and Michael Cole described the upcoming contest as the match loaded.

In terms of entrances, they looked as impressive as you might expect. I certainly noticed a few graphical enhancements over last year, and it appeared as though there were even smoother transitions between entrances, making use of different camera angles.

The match itself played out in a fairly similar fashion to last year’s game. I saw plenty of new moves on display, and the fluidity of the match felt improved. Last year’s pin and submission systems were in place, although I noticed that submissions felt a little smoother and easier to break. I also had no issues with breaking out of my opponent’s constant attempts to pin me in the early stages. I’m still not overly keen on the pin or submission systems, but I couldn’t fault them in the demo I played.

As the match wore on, I wanted to make things a little more exciting. After building up a finisher, I made it out of the ring and headed to the announce table. I proceeded to set my opponent into the right position for an OMG moment, succeeding in putting him through the table. Somewhat to my surprise, AJ Styles produced a devastating Styles Clash that looked like it had positively knocked out Dean Ambrose.

In the midst of rubbing my opponent’s face in it, Dean got to his feet in the space of a few seconds. Then, after standing in an uncontrollable daze for a longer period, he desperately tried to get back in the ring to avoid a count out, but failed to do so. It ruined the immersion a little, as it would have made more sense for Ambrose to remain motionless on the floor than rise so quickly into a dazed state. Hopefully, this sort of thing will be rectified before release. After walking around the show floor for a bit, I headed back to the WWE 2K17 booth to try out the new Backstage Brawl game mode.

Right away, we were transported into a backstage hall area that you’ve probably seen in some gameplay videos thus far. It felt natural to be fighting in our surroundings — Irish whipping my opponent into a wall would result in a realistic animation, and throwing him into the interview set would make it fall apart.

I also found my way into an office, in which Vince McMahon stood behind his desk as he watched us brawl it out. If two of us found ourselves too far away from each other at any time, the camera would split in two, which was reminiscent of something out of a LEGO game. It worked well.

Aside from the environmental aspects of fighting around the backstage area, there were plenty of weapons to utilize. Everything from chairs to briefcases could be wielded, and we certainly made use of them. The details of the brawl itself aren’t all that noteworthy, as we beat each other to a pulp until both wrestlers struggled to get to their feet. Eventually, Seth Rollins put me away with a Pedigree which gave him the win by KO.

Ultimately, I enjoyed what I played of the new Backstage Brawl mode, and I’m looking forward to trying out the rest of the backstage areas on offer. What do I think so far? Traditional one vs. one encounters feel reminiscent of last year’s game with refinements across the board. I’m also aware that somewhat larger refinements have been made in areas like triple threat and ladder matches, both of which I regrettably didn’t get to experience this time around.

I had plenty of fun, with the only real downside presenting itself in the way my opponent got up from a table-driven Styles Clash. Backstage Brawl was particularly exciting, and the good folks of EGX probably got quite a scare as we trash-talked our way through it. After all, what’s a Backstage Brawl without an insult or two!?