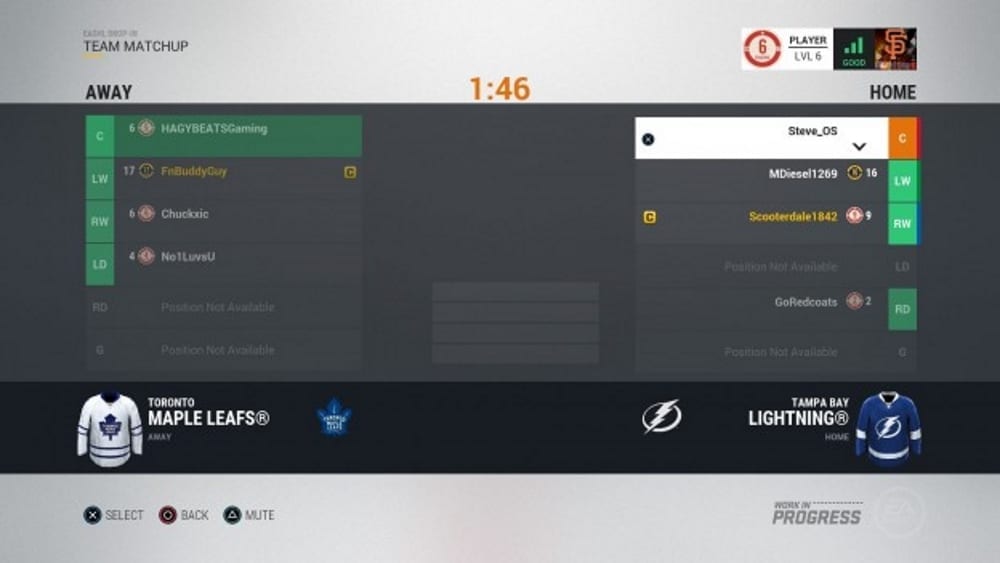 Building a team with all of the winning components is among the most difficult tasks for any sports franchise, and the same is certainly true in the EASHL. The job becomes even trickier for anyone who was unable to coerce enough friends into buying NHL 17, denying you the opportunity to at least put together a squad of your own. Instead, you’ll be forced to confront the same harsh reality that so many players online face: being thrown together with a bunch of strangers and attempting to build some chemistry on the fly as quickly as possible. Welcome to EASHL drop-in games.

In the course of starting from scratch every game and hoping this is the time you’re finally paired with a talented group who will only help complement each other’s abilities (or failing that, at least some people that won’t quit on you), you’ll slowly start to realize you tend to run into the same kind of players throughout the course of your career in the EASHL.

Here’s a rundown of who you can often expect to find on your team as you lace up the skates and fire up your mic time and time again.

Sure, many teams are invigorated by a little bit of youth, but it’s a different story when that youth comes in the form of someone who might actually be an 8-year-old child. It’s possible these kids could actually be pretty good at the game, but that doesn’t mean it’s not a strange experience when you’re left as the only other person with a mic trying to awkwardly make conversation in between shouts from his mom insisting that he finish his homework. “Sooo…you like Pokemon?”

If you’re lucky, you might be able to recognize this guy before the game even starts so you can avoid a terrible experience. He’ll be the one trying to change your team’s uniforms to be white just like your opponent, potentially leading to a confusing game of hockey where you’ll find yourself regularly passing the puck to the other team. If you make it as far as the game, he’ll then proceed to perpetually try to score goals in his own net all while singing (or in some brutal cases, freestyle rapping) on the mic until he eventually gets what he wants, which is everyone quitting.

Nothing you do will ever make this guy happy. You could have already helped him secure a hat trick in the game, and he will still make it a point to scold you when you don’t set him up in front of the net when he was “wide open.” That’s because he’ll typically hog the puck and won’t even pass it to you when you’re ahead of him on a rush going into the opposing zone, leaving you to constantly struggle to stay onsides. And should you ever have the misfortune of falling behind with this guy on the team, get used to hearing him whine about how things would be different if only he had some better teammates.

Even though NHL 17 allows you to select whether you want to play forward or defenseman prior to entering into a game, that doesn’t stop many defensemen from simply playing the game like another forward. If you’re unlucky enough to be paired with an irresponsible player like this on the blue line, you’ll be forced into playing a hyper-conservative game that will see you being the lone man back on countless odd-man rushes. If you attempt to call them out on their careless play, they’ll usually offer up some weak explanation like, “I saw an opening” or “I was just trying to make something happen.”

Every user goalie you play in front of in the EASHL will tell you that he’s very good at stopping pucks. A few of them will actually even live up to those claims, but the majority will be mediocre to poor. Sure, they might start out by making a few saves, but once the first goal gets by them, it’s all downhill from there. Soon, they’ll be insisting that they don’t know what’s happening, that they just came off three(!) shutouts and must just be having an off night. By the time they let in the third or fourth goal, they will usually run out of excuses and just quit out of sheer embarrassment.

Now, as bad as all this may sound, that doesn’t mean there aren’t some great teammates out there along with these unfortunate ones who seem to crop up regularly. And when you do find that rare someone who is able to elevate your game while you do the same for theirs, my suggestion would be to not let that player go gently into the good night where you’re almost guaranteed to never find them again. Instead, reach out to them with a friend request and start putting together a reliable squad that can take on all comers.